AT THE BERNIE SANDERS RALLY IN PORTLAND, OREGON LAST NIGHT

This happened. Around the intertubes, it's being called "Birdie Sanders."

In the nastiest, dirtiest presidential campaign in my lifetime it was sorely needed - a perfect, refreshing moment.

How did I miss this when Bill Maher first broadcast it late in 2014 on his HBO show, Real Time with Bill Maher?

It's as relevant now and if you pay attention, you'll see a quick cutaway of Bernie Sanders at about 57 seconds from the top.

You have to be careful these days because the news media is pretty much all Trump all the time and too much of him will definitely rot your brain.

Last week, Huffington Post senior editor Nick Baumann strung together dozens of what Donald Trump tells us are his many qualifications to be president. Baumann calls it a Prose Poem and indeed, there is a terrifying rhythm to the narcissistic repetition. It begins:

“I am the best builder. Nobody builds walls better than me. I build the best product. Nobody can build a wall like Trump. I’ve always had people say, 'Donald, you have the most beautiful hands.' I have the steadiest hands. I have a very good brain.”

Then it goes on for about 24 column inches of text and ends thusly:

”My primary consultant is myself. I am the least racist person you will ever meet. Nobody reads the Bible more than me. I am very modest. I am the most humble celebrity...”

Remember, every word is a quotation and the repetitive egotism is almost mesmerizing. Read the whole thing here.

Or, at least, that is what he tells us. And it gets even better: a “biblical scholar” has confirmed the find without even seeing the fossils in person. See what you think.

As usual in every presidential and congressional election, Republican candidates for high office are again telling us this year that massive tax cuts will make America great and every American rich.

As it turns out we have a test case for that theory. A few years ago, Kansas Governor Sam Brownback cut taxes in a way that closely resembles what all the Republican contenders for president say they will do with national taxes and last week, Seth Myers took a look how that has worked out for Kansas.

HOW BANANAS ARE HARVESTED

Yes, this video is an extended commercial for the Dole corporation but because I eat half a banana almost every morning of my life but have never seen a banana tree, let alone a farm, I was curious about how they grow. Maybe you are too.

John Oliver's HBO show, Last Week Tonight, is the best advertisment we have for long form journalism, for taking the time – a week in this case – to thoroughly research a single story and then carefully craft it into a smart, informative report.

Hardly anyone does this anymore but Oliver and his crew don't stop at good reporting. They then throw a lot of fall-down-funny humor into the mix. This week, it is a reality-based look at the nuts and bolts of that wall Donald Trump says he, as president, will build.

Most of us have a list of classic literature that we haven't gotten around to reading but intend to do so before we die. TGB's estimable Sunday musicologist, Peter Tibbles, has found a solution for us at BoredPanda. 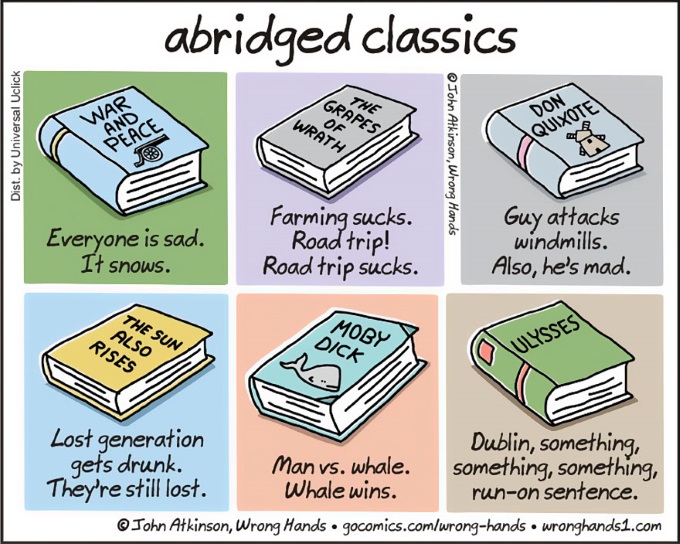 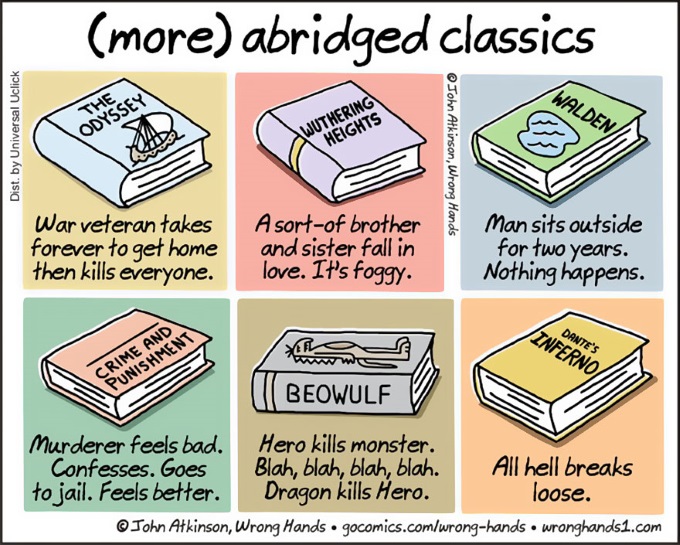 See? Nothing to it. Now you can toss that dusty, old reading list.

It was way back in November 2011 that I first posted this video in Interesting Stuff. Darlene Costner sent it to me then and she's done it again. So I'm posting it a second time because it's so damned much fun.

Everyone should be able to have this much fun dancing all by ourselves like The Oreo Cat does. Thank doctafil for the video.

If you were to move to Florida, you could have bananas growing in your backyard, as I do. They don't look like the commercial bananas as they are fingerlings, but they are sweet & good.

Bill Maher. What a gem.

My respect for Bill Maher has gone up 100%. And my anxiety over reaching the age of 70 has gone down to zero.

The Dole bananas may be happy, but are the workers? Those backbreaking and/or monotonous, assembly line jobs where speed is of the essence are unfortunately all too common in the industrial agricultural/food economy. As consumers, we definitely reap the rewards but at what price to the labor that harvests and packages the food?

I would have more respect for Dole if the film also discussed what the company did, aside from conveyor transport, to ensure the wellbeing of its employees. Instead, I lost my appetite watching it.

"Birdie" Sanders started my day off with a big smile. That was just wonderful. And Bernie was quick on the up take to use it to make a great point.

I have watched the French bicyclist video before and always play is a second time because is really makes me smile.

And Bill Mahler can really zing it in and when he's good he's really good.

Between the popularity of Trump and the Kansas experiment I do believe the Republicans have collectively lost their minds. Even factual proof of the error of their ways fails to sway them. I think I will refer to the GOP as the Gullible Ostrich People.

All my favourites here today. Thank you so much!

I listened to the Bill Maher video and skimmed the rest, either saw it on FB or someone sent it. Maher is correct of course except Red Neck jokes are all OK apparently, although I find them ugly and unAmerican.

Everyone in the US of voting age should watch the video of John Oliver discussing The Trump Wall before voting. Such amazingly precise arguments along with irresistible humor.

Darlene, for Aussies like me who have to think for a moment what GOP actually stands for (sounds too much like GLOP to be taken seriously), Gullible Ostrich People is just perfect!

And if only we could shut our leaders who are prattling tax cuts in a locked room to watch the Kansas experiment story ... Yes, somebody tried it and the evidence is in - fail!

Dear Ronnie: I really like your blog a lot, but I have to protest strongly against your
"Abridged Classics" list. There are few things more wonderful in life than reading
love to read at whatever age. Advising people to discard book lists as "dusty" is
not your style. There are amazing books from many centuries that can open
eyes at any age. Even when eyesight fails, recorded books keep minds alive.
Would you be willing to have a book list ? If so I am at your service. If not, I will
send you separately a list of books I assure you you will want to read : )

Postscript: I was unable to edit my previous comment, which I am re-posting here,
since the former post omitted my major point, which was "read "
Repost follow:

I have to protest strongly against your "Abridged Classics" list. There are few things more wonderful in life than reading . There are amazing books from many centuries that can open eyes at any age. Even when eyesight fails, recorded books keep minds alive. Would you be willing to have a book list ? If so I am at your service. If not, I will send you separately a list of books I assure you many people will want to read : )

I don't know what happened to my original post, but the major point was:
Read and keep minds open about the amazing books called
"classics" which cannot be dismissed. There is so much to read, and time is
limited. What about a book list? or is that a separate mission?

Oh, Cassandra, Abridged Classics is a joke. If you have read them all, congratulations. Many people have not and that does not mean they are "dismissing" the classics. As it happens, I have read all but a couple of them - most many years ago now - and had a great, good laugh at the abridged versions which are spot on.

Some of those books are a real slog to get through and many people haven't read them. That's fine with me; whatever people read is fine with me.

Thank you for the offer of a book list but as you may have noticed, on the right sidebar I keep a list of books about ageing to go with the topic of this blog - although I am the first to admit it is sorely out of date and I will, at my leisure, remedy that.

Although it is nice of you to offer to provide a reading list, this is a personal blog and were I to post an additional reading list (which I will not), it wouldn't make sense if it were not my own.

I'm sure you understand. Meanwhile, have a little bit of a re-read the Abridged Classics above. The shortened versions are quite funny and it is as good to laugh as it is to read.

I wasn't as charmed by the bird lighting on Bernie's podium as were some readers. Perhaps I was contrasting it with another very recent video in which he brushes his wife aside and peremptorily tells her not to stand near him as he makes his victory speech. She did not get the gracious treatment the bird got and appears to be quite embarrassed and chastened. One can't help but wonder about whether this kind of treatment extends to others close to the great man, such as, for example the son he never has with him on the podium.

I just watched the whole John Oliver segment on "The Trump Wall." Priceless and yet right on about how ridiculous Trump's proposal is. Makes absolutely no sense that this is a viable solution. It made for great entertainment however. I don't know who writes for John Oliver but they sure come up with funny observations for him.