Home About Archive Contact
Electronic Home Monitoring of Elders
Can You Hear Me Now?

Lighten Your Life Before You Kick the Bucket - Book and Contest

That headline is only part of the title. In full, it is Seven Ways to Lighten Your Life Before You Kick the Bucket and the first thing to know about it is that it is not about bucket lists. (Whew! Had it been, I would not have paid attention.)

Instead, Lighten Your Life... is, as the two authors explain on page 1,

I'll get to those “...ucket lists” in a moment but first, meet Walt Hopkins and George Simons, two old guys in their 70s who are decades-long friends, one of whom lives in the south of France these days, the other in Scotland although both grew up in Ohio. 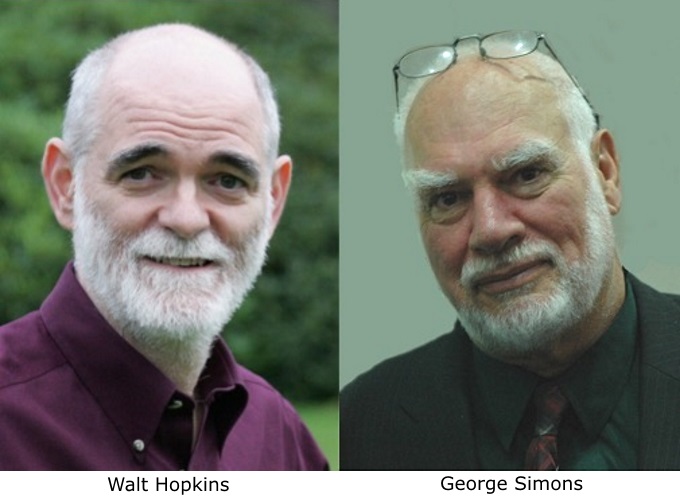 They remind me (non-U.S. readers might not get this reference) of Click and Clack, the Tappet Brothers who hosted the long-running PBS radio show, Car Talk.

Walt and George have a similar joie de vivre, love of life and a good laugh, aren't afraid to be silly and are equally expert in their fields as Click and Clack were at theirs. Here is how they described their ongoing careers to me:

”In more than 30 countries for more than 40 years, Walt Hopkins has been leading courses on influencing skills and life-designing skills for all sorts of organizations—including the UN’s World Food Programme, the European Space Agency, Shell, Statoil, and Unilever. 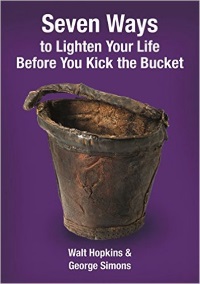 With generous examples from their lives and the lives of people they have known, along a multitude of wise quotations from the ancients to the moderns and a lot of laughing along the way, Walt and George explain how they have come to savor their late years by making time and room to enjoy “that which is most precious to them.”

Although there are “Learnings” throughout the book, it is not necessarily an instruction book or a how-to or a primer about growing old. As they say up front:

”Pluck what works for you and duck, chuck, or fuck the rest.”

Which brings me to those seven “...ucket lists.” Fortunately for me, Walt and George have provided something any long-time TGB readers know I'm no good at: succinct explanations. Here are their short versions of the seven “...uckets.”

Within each of the seven are many kinds of suggestions on how to “lighten your life” - some of it advice along with wise observations, reflections, how to laugh at yourself and give yourself permissions you might not have done in the past. Now, they tell us, with great, good nature throughout, is the time to do this.

You can easily guess that number one, Chucket, is about getting rid of the stuff we collect over a lifetime and they provide a list (yes, a list of seven) questions to help decide what to keep and what to “chuck.”

The Shucket section is all about peeling off “the unneeded, distracting, the useless” and it's not all physical. George writes this chapter and he quotes the Italian poet, Cesare Pavese:

”Take off all your envies, jealousies, unforgiveness, selfishness and fears...the closing years of life are like the end of a masquerade party, when the masks are dropped.”

I'm tellin' ya, if there were nothing else in this book, the many quotations about growing old would be worth every penny. Before this book, I thought I had a rich and extensive collection of age-related quotations. I was mistaken. But they and I do share this, Raymond Carver's last poem titled Late Fragment:

Walt writes the Fucket section which is, to some degree, exactly what you think it would be, but wider, broader, deeper. One of the things on Walt's fucket list to leave behind is fear and in explaining, he quotes James Lipton:

”I am speaking of the kind of risk-taking that seems to be involved in the conspicuous abandonment of safe physical, emotional and intellectual redoubts, in favor of new paths where dragons may lie in wait.

“I am sacrilegiously equating a state of fear with a state of grace, if the fear is evoked by testing treasured beliefs and established patterns – one's own, not someone else's.

There are so many wise and wonderful delights in Lighten Your Life that I could quote endlessly. Instead, I'm going to hold a drawing to give away three copies. But first, two more things. The seventh way is the Tucket List and George explains that it's a real word. Who knew:

”To tuck is to play a drumroll. A tucket is a fanfare – a trumpet blast with a roll of drums – that originated in Elizabethan drama. So your tuckets are your fanfares...

“Choosing to Tucket is choosing to toot your own horn and sound your own drum, possibly to others but mainly to yourself.”

This thoughtful guide to living our late years well is something to keep nearby as there is much to learn from these guys. Get out your highlighters – it's the kind of book you'll want to mark up.

Seven Ways to Light Your Life Before You Kick the Bucket is available at the usual online book purveyors. You can also order it from the U.K. publisher and you can follow Walt and George at the book's Facebook page.

The authors have made three copies of Lighten Your Life available to give away to TGB readers. As in the past, we will do a random drawing. Here's how it goes:

The contest will close tomorrow night, 17 March 2016, at midnight U.S. Pacific daylight time. The three winners will be chosen in a random, electronic drawing and their names (as they appear at the bottom of their comments) will be announced on this blog on Friday 18 March 2016.

I'll leave you with one more of the many well-chosen quotations Walt and George have scattered throughout their book. This one is from the American mythologist, Joseph Campbell:

”One great thing about growing old is that nothing is going to lead to anything. Everything is of the moment.”

I'd really enjoy this book, count me in please.

Sounds like just the sort of book I can use right now; I retire at the end of the month. Please enter my name in the drawing!

I'm in my 75th year, and just beginning to feel old-ish. I'll put this book on my Amazon Wish List, and hold it there a couple of days to see if I win one.

Goodness gracious...please enter me in the contest. When I moved I lost (my own lack of paying attention) a very precious gift that can't be replaced. It was in a drawer of furniture that was being given away. I'm still grieving over the loss. However, I've got enough other chuckett stuff that I can certainly work out my feelings while throwing some things around!

Please, please, ME, ME

Wow! This is certainly a long list of followers of your excellent blog, Ronni. The book sounds wonderful, and as an inveterate quote junkie, I am interested in a copy. Thanks for making us aware of it.

I would love to have a copy! Thanks, Ronni.

Me, too. And thanks for your column, Ronni.

I will be a humble winner.

Love the blog and the book! Sign me up to win!

Seven Ways to Lighten Your Life Before You Kick the Bucket sounds like my kind of book and I would love to win a copy. I have enjoyed reading your blog but have never commented before.

Please enter me in contest! Thanks Diane

Suggestion: let's all "Huck-it"--get someone else to paint that 'Huckleberry Finn fence' for us, in our older years.

I'm hoping I win one; it's been a while since I got "lucky"! Thank you, Ronni for informing and entertaining me this past couple years since I happily discovered your blog :)

I hope I win! Thanks!

I thought I entered the contest with a comment but cannot find it - grimlins in my computer again? Appreciate it.

These guys sound like fun and I'm in the Chucket phase, so let me get in on this one. :-)

This sounds like a great book for a book club discussion. Thanks for mentioning it to us.

Yes, I'd love this book.

A brilliant book! Knowing Walt, i was expecting something great, witty and funny. And this book is exactly that but also a treasure for self reflection, exploration and enjoyment!