Home About Archive Contact
The Imperative to Live and to Die
ELDER MUSIC: Blues Brothers

The Department of Labor last week announced new regulations requiring financial retirement advisors and brokers who handle individual retirement and 401(k) accounts to act in the best interests of their clients.

You would think that would go without saying even if not codified in regulations but apparently not. As The New York Times explained:

”...brokers are generally required only to recommend 'suitable' investments, which means, for example, that they can push a more expensive mutual fund that pays a higher commission when an otherwise identical, cheaper fund would have been an equal or better alternative.”

It isn't all good news as only certain retirement accounts are affected not to mention that some expect the new regulations to be challenged in court. Let's say, then, that it's a start.

For as long as I can remember I've been a binder clip fan. My three major uses are to keep opened berry and vegetables packages closed in the freezer, keep toothpaste tubes from unfolding (#12 in video) and to hold peripherals cables together behind my computer.

But it's obvious from this video that my imagination for binder clip use is pitifully underdeveloped:

Mattia Menchetti, a biology student at the University of Florence realized that by giving a captive colony of European paper wasps different colored paper, the insects would build their own kaleidoscopic houses.

Wow. Look at what the wasps did with that colored paper: 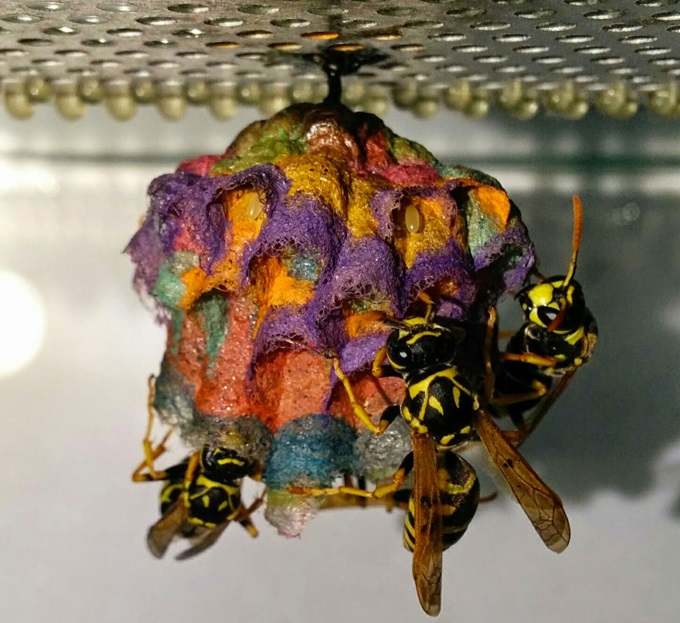 As the BoredPanda page explains,

”While this experiment was deliberate, unintentional human interference with the insect world has also produced some equally surprising results.

“In 2012 for example, beekeepers in France were amazed to discover that their bees had created green and blue honey. The reason? The unsuspecting insects were using sugar collected from the shells of M&Ms at a nearby waste-processing plant.”

You can see more of the psychedelic wasp nests at BoredPanda.

AN ESCAPE STORY YOU'D ALMOST DIE TO HAVE VIDEO OF

Inky the octopus lived at the National Aquarium of New Zealand, a favorite with the entire country. Until, that is, Inky pulled a Houdini one night by escaping through a small hole in the top of his tank. The New York Times reports:

”Octopus tracks suggest he then scampered eight feet across the floor and slid down a 164-foot-long drainpipe that dropped him into Hawke’s Bay, on the east coast of North Island, according to reports in New Zealand’s news media...

“The aquarium’s manager, Rob Yarrall, told Radio New Zealand that employees had searched the aquarium’s pipes after discovering Inky’s trail, to no avail.

“The escape happened several months ago, but it only recently came to light. 'He managed to make his way to one of the drain holes that go back to the ocean, and off he went, Mr. Yarrall said. 'Didn’t even leave us a message.'”

Hurray for Inky, I say. Here's a photo of him before he escaped: 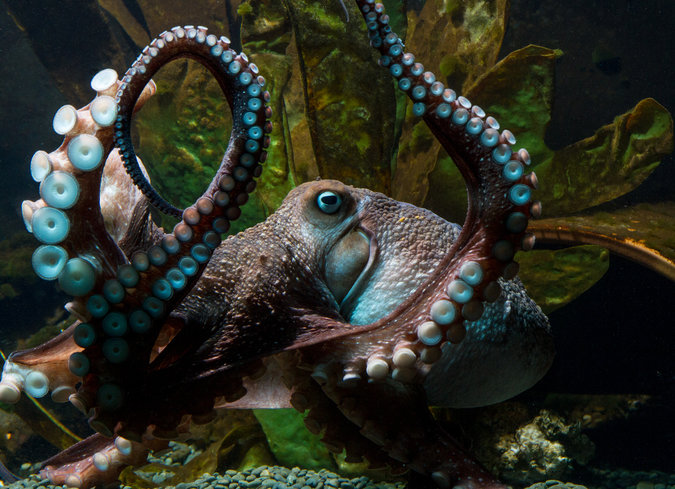 Most candidates for public office do everything, say anything at all to appeal to the largest number of voters possible, making them as bland as Wonderbread.

Of course, with such candidates as Donald Trump, Ted Cruz and Bernie Sanders this year, that age-old strategy doesn't apply but that doesn't make this video any less ironic and funny.

Usually in this space, I post the most recent video essay from John Oliver's HBO program, Last Week Tonight. But I already did that a couple of days ago (you can see it here).

So today, let's get the John Oliver slant on the amazing, expanding scandal at the top echelons of Alabama government in his short essay from last Sunday.

Young people may not know her name but it is embedded in the mind of our generation because Kitty Genovese, who was raped and murdered in New York City in 1964, became an enduring symbol of urban apathy.

Her killer, Winston Moseley, died a couple of weeks ago at age 81 in the Dannemora, New York prison. Here is an interview with Ms. Genovese's roommate:

”The Tootsie Roll was a heat-safe chocolate that held up well all year round. Among the many candies appearing in the rations of World War II soldiers, it was so durable and dependable, soldiers used 'Tootsie Roll' as another name for bullets.”

Milk Duds were created in Chicago in the 1920s but the company was having trouble coming up with a good marketing name:

”...how do you give zing to a candy you intended to be a perfectly round chocolate-covered caramel ball that sagged and dented? It wasn’t a ball. It was a dud. And that’s when someone in the company came up with a great idea.

“'Let’s call it 'Milk Chocolate Duds! Too long? OK, then just Milk Duds!' It’s too bad that person’s identity has been lost in the annals of history. It was the first and only time, as far as I know, that a candy was named for its liability.”

You can read about the beginnings of more of our childhood candies at Salon where the story is excerpted from the new book, Sweet as Sin By Susan Benjamin.

ONE OF THE SWEETEST ANIMAL VIDEOS

That's what Cathy Johnson wrote in her email with the link to this video. The YouTube page explains:

”Following winters in Africa, storks have been returning to their summer residences in Croatia every spring since ancient times. They weave their nests in close proximity to rivers, swamps and lakes, whose natural wealth guarantee the survival of their offspring.

“However, there are also many hunters in these locals. 18 years ago, a bullet found its way to the wing of a stork just before its first departure for Africa. The wounded bird was saved from sure death by a fisherman who took the bird home with him.”

Another Saturday treasure. Thanks, Ronni especially for the paper clip video. I love those gadgets, too & now I have more uses for them.

The stork video, a heart-melt, but saddened to remember Kitty G. That was soooo sad & unsettling at the time & these days not so much. How far we've come, but at what cost? Thanks again for the start of a great w/end. Dee :)

If you look up "kitty genovese what really happened" you find that the real story is quite different from what we have believed all these years. People did call the police - they dismissed it as a "domestic" and didn't come. There was no 911 at the time and police asked many personal questions of callers, who may have chosen for their own reasons not to go through with reports. Lots more.

As I grow older, I find it interesting to revisit big events of my youth to see the difference between how the story was reported at the time and what is known now.

Clearly I should have watched that video before posting the brother's story about Kitty dying in her lover's arms.

However, many other sources indicate that calls were made, and people tried to stop it.

Thanks for another good Saturday. I use binder clips as you do for packages in the freezer but never thought of the toothpaste tube nor any of the other nifty uses. The storks are touching and sweet. I saw a documentary last night about songbirds, those tiny little singers-- some migrate from northern USA to the Amazon forests and always return the same nest in the US to raise their young -- this is known because they are tagged by researchers. Birds are amazing and beautiful.

Another great Saturday of Interesting Stuff.

Thanks for the video showing all those uses for binder clips; they're as useful as duck tape!

The stork video was just as good as the first time I saw it. It warms my heart and boosts my faith in humanity each time I learn about a story like this.

The other stories about various animals, the wasps, the bees that produced colored honey after eating sugar from M & M shells from a waste processing plant (????) and the octopus were all fascinating. I agree with you in cheering on Inky in his escape. Although he may have a much shorter life in the wild, at least it may be more exciting and fulfilling.

Thanks for another educational and entertaining start to the weekend!

I'm reading "The soul of an octopus", a wonderfully surprising book.

John Oliver is so funny and always gets to the heart of the subject. He also points out how corrupt many politicians are. And it always seems to involve either sex or money. Usually both. Oh if only all politicians had the integrity of Elizabeth Warren and a few others like her.

I remember always buying a box of Milk Duds to eat while watching a movie. But I never even thought about why they were named that. Thanks for filling in a blank in my knowledge.

It's also nice to learn that some people tried to save Kitty Genovese, but that the police department failed to do their job, as did the media. Some things never change.