Home About Archive Contact
How Time Flies – Or Not Sometimes
ELDER MUSIC: The Singing Dead

I still remember my surprise more than half a century ago when, at a radio station, I saw a stack of audio cassettes with such labels as “Eisenhower Obit.”

Not that I had thought about it but I had no idea before that day that news organizations prepared obituaries long before the death of important people. It seemed creepy to me then. I got used to it and over the years even prepared a few advance obits myself.

Now, The New York Times is one of the few remaining news outlets with full time obituary writers. A new documentary titled Obit that is an inside look at how obits are produced at The Times had its premier at the TriBeCa Film Festival in April. Here's the trailer:

The webpage for the film is here. You can read more here and here. (Hat tip to Tom Delmore for forwarding the story.)

Is there a season for colonoscopies? In the past few weeks, five or six people I know have mentioned prepping for the examination. That is, of course, a good thing, as this silly but important ditty reminds us.

Because this man in Salem, Oregon, ordered a pizza almost every day for years, the workers at Domino's got worried when there was no call from him for nearly two weeks. Their concern saved his life. Here's the story from Good Morning America.

DECAPITALIZING THE INTERNET AND THE WEB

This may not seem monumental to you, but let me tell why it is to me.

Way back in the mid-1990s, when I was managing editor of the first CBS New website, I made it policy that in our stories we did not capitalize the word “internet.” I left in place capitalization of “Web” as it stands in for World Wide Web.

I've taken a lot of flak for this decision over the years. The New York Times and many, many other news organizations capitalize Internet.

My thinking is that since internet is not a company or a place or anyone's name, it does not require capitalization. It is comparable, I've kept explaining, to telephone. No one would capitalize telephone.

Now, on 1 June, the rest of the media at last catches up with me – and more:

”Associated Press editors announced a new stylebook change Saturday ahead of a session at the annual American Copy Editors Society's conference — the 2016 stylebook will lowercase the words 'internet' and 'web'."

Hardly anyone these days knows that the “web” is short for world wide web so I think lowercasing it is a good idea. You can read about the decision at Poynter.

Of course, I laughed my ass off but this is important too. It is something I struggle with almost every day for this blog. Dozens of new studies are reported each week – more than you might think that relate to old people, too, and most of them are years away from proving anything – if they ever will. But I still need to plow through the reports to know that.

An added difficulty is that news stories (as opposed to the research itself) all too often report the results of, for example, a study of 12 fruit flies as proof that cancer is now cured. I cannot express how much I love John Oliver for this video essay. Someone needed to say this and he's a lot funnier than I am.

TGB reader Margaret Cardoza sent this item and its amazing. As Alan Taylor at The Atlantic reported,

”On Wednesday, the United Kingdom marked the 75th anniversary of 'The Longest Night,' the final horrible night of the Blitz—an eight-month-long aerial bombing offensive launched by Nazi Germany during World War II.

“More than 40,000 British civilians were killed in the Blitz, 1.5 million Londoners were left homeless, and the city’s landscape was left shattered.”

Recently, Getty photographer Jim Dyson traveled to some of the devastated London locations and produced a series of amazing then(in b&w)/now (in color) photographs of the same location edited together. Here is an example of Westminster Abbey. 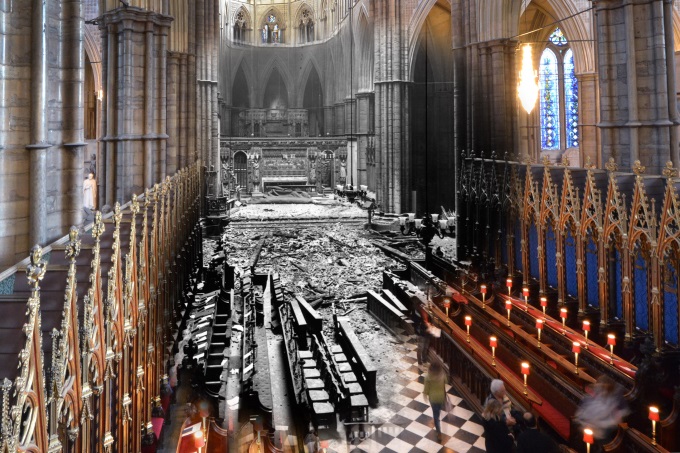 And another of Leicester Square. 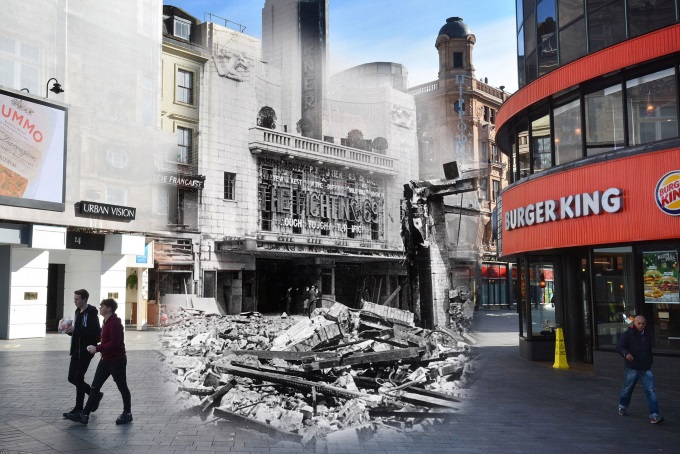 You can see many more photos of London 75 years ago and now at The Atlantic.

Pay attention here, Americans: Last Sunday, 8 May, Australian Prime Minister Malcolm Turnbull called for federal elections to be held on – wait for it – 2 July. That would be a 55-day campaign. Here's a short report:

The longest campaign ever in Australia. Oh, god - if only we in the United States could have a campaign as long as Australia's. You can read more here.

MSNBC host and pundit Rachel Maddow stopped by the Late Night with Seth Meyers TV show this week and the two of them had a short, important conversation about the election campaign.

This gave me my biggest out-loud laugh of the week and now that I'm writing it, I'm laughing again. It would have been easy enough to miss the story if Mediaite had not reported it:

”...in the complex worlds of print and digital journalism, even the media giants make errors every now and then. Sometimes it’s a slight misspelling of someone’s names, or perhaps a job title that’s a little off. In these cases, editors print corrections — official statements of error, usually italics, to indicate a slight mistake in an earlier version of the story.

“Well, this is certainly one of the greatest corrections of 2016.”

Here is how the correction appears at the bottom of The Times story:

You can read the Mediaite report here and The New York Times story with appended correction here.

THE LIFE OF STELLA – A HAPPY DOG

”Stella is a perfectly healthy yellow lab. She uses her 'dog brakes' to cool down her belly on the grass after she's been fetching and playing. She has been tested for EIC and has no medical issues at all.”

I have no idea what that last sentence means but this is one of the happiest videos I've seen recently. I dare you not to grin while you're watching.

Ronni,
Just plain and simple......Thank you for all the time you spend on your blog!
It is appreciated.
Redstone

Great Saturday morning reading. John Oliver is wonderful. I followed your link to the composite photos of the blitz in London.

John Oliver illustrates why I don't pay any attention to studies. I have always thought that common sense living is the best way to go. Eat sensibly, keep moving and moderation in all things. Who needs a study to tell you to overindulge in coffee or chocolate or wine; or in anything, for that matter in the guise that it's good for you?

You were right, Ronni. I had to laugh at the dog's antics. He was so happy and having such a good time that I wanted to join him in jumping in that pile of leaves.

A short 55 day election? How wonderful, but the media would never allow it. Look at the money they would lose in political ads. Not only is Australia much smarter than we are having short elections, but everybody must vote or pay a fine. At least that's the way I understand it. If I'm wrong I think Peter will correct me.

Thank you for sharing this inspiring story of caring by normal everyday people who happen to work for Domino's Pizza.

Regarding the dog Stella with no medical issues such as EIC, exercise induced collapse . Can' say the same for myself these days. I may not collapse but a few minutes sitting after running the vacuum or cleaning the bathroom is standard practice theses days. I do think Stella is younger than I am.
Genie

I loved every bit of this! John Oliver and Stella were the bomb! Thank you... I have a Canadian friend who complained about a 36 day campaign last year. If only!

Interesting potpourri of amusing items. Just for the record, I had my last colonoscopy on New Year's Eve.

No colonoscopy for me -- can't do the prep. Believe me, I've tried.

I'll bet Stella has never had a colonoscopy either. That's why she's sooo happy.

Stella is the happiest dog I have ever seen. I'm still grinning.