Home About Archive Contact
Me, Myself and I in Old Age
ELDER MUSIC: Songs of the Gershwins

ELDER-FRIENDLY SUMMER FESTIVALS IN THE U.K.

For U.K. TGB readers, there is an extensive list online of upcoming summer festivals – an amazing variety of them. I'm sorry I missed the mussel festival earlier this month but on 25 and 26 June, there is the first Gin Festival.

It takes place in Cornwall celebrating, they say, the gin of the United Kingdom – a two-day event of live music and gin appreciation. Yeah. Right. But I have always preferred gin to vodka.

”Experience the true 1940's life with entertainment, food and games all inspired by the 1940's period. Expect a really fun day and evening and you won't be out of place if you dress up in the period.”

The Mt. Washington Observatory in New Hampshire is nickname World's Worst Weather and you're going to see why in this video.

Weather Observers Mike Dorfman and Tom Padham took a brief break earlier this week to “enjoy” the windy and wintry conditions on the observation deck where gusts, they said, “topped out at 109 mph.” Wow.

In our digital age, if you have traveled to countries where you don't speak the language, you may have become familiar with smartphone translator apps. They can help a lot.

Now there is about to be something amazing. Take a look at this video:

You can see still shots and read more details at Bored Panda. There are answers to questions you may have at the company that is developing this upcoming product, Wavery Labs.

DEAR GOD – WHAT ARE THE ELITES COMING TO?

In Hollywood, there is an actor named Gwyneth Paltrow. Ms. Paltrow keeps a website she calls Goop where, among other things, she sells stuff. This is one of those items: 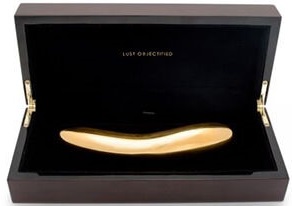 LSD: WHAT A LONG STRANGE TRIP IT'S BEEN

Back in the day, I took several LSD - “acid” - trips. I've always been careful about my drugs and I partook only when it was still manufactured by Sandoz Laboratories. After the U.S. government outlawed and there was only homemade acid, I stopped.

But I want to be clear that I thought then – and still do – that it was both fun and fascinating and would have some useful medical applications.

Now, as The New York Times reports in a Retro Report, researchers are working on that idea with some potentially important results.

On his HBO show, Last Week Tonight last Sunday, John Oliver reported on 911 emergency systems in the U.S. that are hopelessly out of date.

Of course, he is devastatingly funny about this deadly serious problem.

Serendipity is a fun and amazing thing. As the so-called “mindfulness” fad seems to have reached peak popularity recently, I've been thinking of it as meditation for lazy people and ruminating on how I might write about that for this blog.

Well, if you wait long enough, a like-minded friend might do it for you. That's what happen when Chuck Nyren published a piece titled The Path to Bodily Enlightenment at his Huffington Post column.

Because he's funnier than I am, he took it in a direction I hadn't thought about and explained how growing older provides all the bodily mindfulness he needs:

”My innards are likewise enlightened. Example: that alimentary canal. Years ago I would just eat something. Then I’d eat something else. That was that. No satori attaining.

“Now, every morsel is mindful, especially if doused in sriracha sauce. Not a moment goes by without me knowing exactly where it is on its epic journey. Even during and immediately following extrusion it leaves an afterglow of awareness! Sometimes I think I’m the most enlightened person in the world.”

The possibility of resolving conflicts that separate Muslims and Jews seems hopeless and it's for that reason that I admire and respect the people – writers, thinkers, diplomats and, in this case, an internet star – who keep trying.

Karim Metwaly is the American-born son of Egyptian immigrant parents who is a singer, actor and vlogger well known on YouTube for his parodies and other videos about Muslims.

In this one, his camera follows two Muslim/Jewish couples as they walk together through Manhattan ethnic neighborhoods. Take a look:

Sooner or later, almost all of us say something like, “If that's not true, I'll eat my hat.” We usually don't.

In this case, it is Washington Post columnist Dana Milbank who, last year, promised that if Donald Trump became the Republican Party nominee for president, he would eat his entire print column – and his colleagues in the press held him to it.

I've seen this in the past – someone chews up and swallows an actual piece of paper. But Milbank found a chef who cooked the column into a fancy meal of several courses that also included wine.

I think that's cheating. Take a look and see what you think.

The Jewish/Muslim video really got to me. I was so afraid for them as they walked along. The end had me in tears seeing the welcoming faces. The South Devon Festival sounds like a hoot. I like the ones where people dress up. Long way to go though, I may settle for the local Scottish Clan Gathering instead. Good fun though.

911 calls--- It always amazes me how you think something is functioning and it is not and whoever is suppose to watch it --just watches it, maybe, sort of work--or not.

Or good intentions that were put in place which are not considered important. Re -directing money to slush fund?? --- who would even think to watch for that kind of duplicity.

Nobody seems to be minding the store--what about bridges falling and all other unknowns too ---I am thankful that John brings up all these areas of concern ---but does anything get addressed.

Who are these people??

This post encapsulates the awful and the great that pass for news today: the Dana Milbank stunt and Gwyneth Paltrow thing vs. the invention of the instant translator.

I wish the Gwyneth Paltrow bit had been at the end; I was enjoying today's Interesting Stuff until then. I am not entirely speechless, but the words that come to mind are not appropriate for polite company so I will keep them to myself.

Wishing I was able to access a couple of these festivals in the UK, especially the 1940's fest. The gin fest sounds pretty interesting, too.

The LSD article was fascinating. I was aware of the application for dealing with some of the issues mentioned, and it may not be inconceivable that one day, in the not too distant future, that this becomes as widely accepted as medicinal marijuana. The times they are a changing.

Thank you for another entertaining Saturday Ronni.

I was not surprised by Gyneth Paltrow's website Goop with its wildly outrageous prices for sandals and such. A tote bag for $1750? Does anyone really ever buy that stuff?

The language translator seemed very cool and useful. I 'd love to know more about it.

Finally, John Oliver did his usual phenomenal job of taking what seems a mundane issue and examining the technical and political aspects in a humorous way. What can any of us do about 911?

Hi ... (no pun intended)
I dropped a couple of acids in the 1960s too. It also was the high-end stuff from the original source in the hospital in NYCity ... the results were lovely, I saw music in the air and heard paintings. It was fun a couple of times, but like you, when it was home-made I ran from it. Several people I knew had very bad results from that kind.

Very creative thought meanderings. Difficult, if not impossible, to copy