Home About Archive Contact
When are Aches and Pains Serious?
ELDER MUSIC: Hooked on Classics

When John Oliver's most recent Last Week Tonight show on HBO was broadcast last Sunday night, fewer than 24 hours had passed since the attack at the Pulse nightclub in Orlando.

Very little was known about the attacker or the victims yet but Oliver opened his show with a short, moving reference to the amazing and immediate reaction of the people of Orlando.

HBO, for unfathomable reasons, does not allow embedding of that one-and-a-half minute video but you can see it here.

On the other hand, Oliver's former colleague on The Daily Show, Samantha Bee, had a few choice words about the Orlando horror on her new TBS television program, Full Frontal - a response that took the internet by storm.

It's not safe for work or children (well, I'd show to kids but that's just me). It is, however, okay for the grownups who read this blog:

At the end of his commentary on Orlando last Sunday, John Oliver referred to his “stupid show.” I don't often disagree with him but he is wrong about that. His show is never stupid - even in the wake of such a terrible event as Orlando - and this one, about retirement plans, is of particular import to people who read TGB.

Darlene Costner sent this commercial for Evian with the note that it's the “cutest ad ever.” That's true. But it is also really, really funny. I laughed my ass off through the whole thing.

Keep your eye on the teen's face, put yourself in his place as he walks along the beach. Like he's landed in an alternate universe.

NEW CARS WILL KNOW WHO CAUSED THE ACCIDENT

Not long ago, the driver of a Tesla car claimed that his car had crashed into a building because it had accelerated on its own. 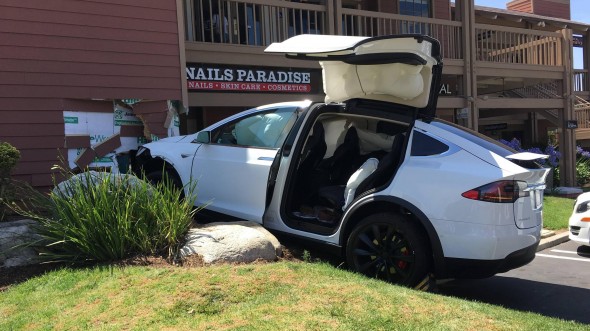 However, Tesla automobiles are constantly in touch with the manufacturer via the internet. As a company statement noted:

"Data shows that the vehicle was traveling at 6 mph when the accelerator pedal was abruptly increased to 100 percent...Consistent with the driver’s actions, the vehicle applied torque and accelerated as instructed."

MIT Technology Review, where I saw this story, explains that although the majority of new cars sold in the U.S. now have data recorders (“black boxes”), they don't record as much information as Teslas to. But they will do so before long:

”Only about a quarter of new cars have the necessary technology today, but that's expected to reach over 90 percent by 2020. Companies such as GM are open about their interest in expanding the range of data they collect on driver actions to open up new business opportunities.”

Apparently auto manufacturers want to get into the insurance business. You can read more at MIT Technology Review.

ACE AND THE DESERT DAWG

Yes, this is an extended commercial for a brand of athletic shoes but it's nice anyway. Thank reader Ali.

You can read more about the desert trek here.

There is a company named SRI International that is developing a robotic suit called Superflex that may allow old people (and anyone else) to ditch their walkers. If it does what they say and is as affordable as they claim, wow. Take a look at the this video.

This, if it works out as well as SRI expects, is an extraordinary development for elders and think of how cool everyone who uses it will look – like a movie superhero.

You can read more details at MIT Technology Review.

Hurray, hurray, hurray. It's been a long time coming and it will probably be challenged in court by the cable carriers. But for now, we – the good guys – won one last week when an appeals court upheld net neutrality. Take a look at a clear explanation from The New York Times.

I get them all the time – email that appears to be from friends (and blog readers too) with a link to a news story about a product. It's all a fake. The Federal Drug Administration (FDA) explains:

”...they sent millions of people illegal spam emails that were made to look like they came from someone familiar. Their goal? To generate sales. The FTC says the emails linked to fake news sites with fictitious articles and phony endorsements – even, supposedly, from Oprah.

“What’s more, says the FTC, there’s no solid science backing the defendants’ claims about the pills.”

This story from the FDA website is specifically about weight loss pills, but there are plenty of other fake stories emailed in the same way about other kinds of phony products.

Certainly you know by now what kind of links to not click on. But you might want to pass these tips from FDA on to friends who may not know:

• Don’t click emailed links or open attachments, even if you think you know the sender. Emails that seem to be from a friend might not be.

• Intrigued by weight-loss claims? Anyone saying they lost more than a pound a week without diet and exercise is probably lying.

• Learn how to spot a fake news site, which often include fake celebrity endorsements. These actually are elaborate ads created by marketers.

• File a complaint with the FTC if you ever spot a scam, or get sold on phony product promises.

You can read more the FDA's consumer information website.

The YouTube page explains that the Republic of Molossia is not officially recognized by the United States as a sovereign nation, however, it has 32 residents,

”...its own post office, bank and space program. Its president (and benevolent dictator), Kevin Baugh, has found the perfect way to combine politics with a sense of humor.”

Reggie, a three-year-old Staffordshire bull terrier, can’t contain his excitement as the ice cream van pays a visit to his neighbourhood captured by smartphone. Keep your eye on Reggie's tail.

Maintaining a second, private email address that you never disclose to online sites that require one (always provide your old spam-filled email address for that) eliminates spam. Your old address, by now, has been sold or given to dozens of firms and "business partners." If in doubt about a sender, look at the email's complete header. It shows a lot of computerese but includes the true origin of the email.

That "who caused the accident" thing is wonderful. Should cut down on a lot of opportunistic law suits and help settle a lot of insurance claims. Amazing how "smart" cars are getting (but count me out when it comes to self-driving cars).

I'll have to go back later to watch the John Oliver show of retirement plans.

Old computer programmer here... a lesson learned over 40 years in the industry -- more like 50 years, counting volunteer work: Given a sufficiently complex system, there is always one more bug.

Yes, in theory, if everything's working right, a black box will help pinpoint what really happened. But when I read, "Data shows that the vehicle was traveling at 6 mph when the accelerator pedal was abruptly increased to 100 percent..." my first thought is, that only proves the sensor on the accelerator pedal reported that it had been floored, and the car obeyed the signal. That DOES NOT exculpate the vehicle. The accelerator pedal sensor could also have suddenly malfunctioned, giving a false report that caused the car to shoot forward. Another thing about computer programs: Garbage in, garbage out. If the input is wrong the result will also be wrong, sometimes catastrophically.

Also, what's this about Tesla vehicles being "constantly in touch with the manufacturer" via the internet? Goodbye, privacy. I guess that's the wave of the future. What are Tesla buyers getting in return? Me, I think I'd want to hold out for complete, reliable, no-more-bugs, self driving.

Oh, wait... there is always one more bug!

As for the "Superflex" robotic suit, I would like to see a video of an elder-like us- don the suit without help and try it. Some folks have a problem getting their socks and shoes on...I think I would be inclined to use a walker instead. Otherwise, I can see the benefits of it.

Anyone who, like I do, wears compression stockings, knows what a pain they are to put on and to take off. That's not to mention how warm they are while you're wearing them. So in the winter you might be comfortable enough not to mind the hassle, but in the summer you'd probably rather opt for swollen ankles and feet rather than even contemplating the stockings...

I loved Reggie with the tail that wagged furiously in excitement. He brightened my day.

The Robotic Suit is intriguing and my question is, will it help with balance? I am sure it would make my life easier in being able to squat and walk, but without that sense of balance I would still need a walker to hold onto. If the Robotic Suit becomes available for me I would really be a bionic woman with my CI (cochlear implant) and metal hip.

Too bad the new fiduciary law didn't come along in time to help most current retirees. I did what I could to save for retirement, primarily by contributing to a 403(b) at my nonprofit for almost 20 years. We managers were busy doing our jobs, and although we felt that invested funds weren't growing as fast as they should be, none of us really understood how the fee structure worked--against us.

Even if we had, there probably wouldn't have been much we could have done about it since we were a small nonprofit agency and not eligible for any of the breaks the big corporations undoubtedly got. We didn't have their pricey financial and legal backup, either. I'm 99% certain that our broker was simply a salesman and NOT a fiduciary. He and his company probably made a bundle selling their products to financially naïve nonprofits.

I might well have had an additional $50-70K+ in my retirement fund if the fiduciary law had been in effect for those 20 years. It would be nice to have that money now, and I'm glad that future retirees will be able to keep more of their own 401(k)/403(b) savings.

Does anybody know how to find a fiduciary?

Who can provide reputable financial advice?

Any information would be greatly appreciated.