Home About Archive Contact
As Forgetfulness Sneaks Up
ELDER MUSIC: Romeo and Juliet

Several times during budget negotiations with Congress during his administration, President Barack Obama supported and even suggested cuts to Social Security:

”The cut Obama came closest to passing,” Huffington Post reminds us, “would have come from changes to the formula used to calculate annual cost-of-living adjustments that help benefits keep pace with inflation. The White House repeatedly offered it to congressional Republican leaders during fiscal cliff talks at the end of 2012.”

Apparently, he has now changed his mind. In a speech on Wednesday in Elkhart, Indiana, Obama backed the movement to expands Social Security. Take a listen:

Nowadays, it is widely known that for all kinds of health and safety reasons, astronauts cannot have loose food in the weightless conditions of spacecraft. That wasn't entirely clear to at least one astronaut in the earliest days of our space program:

According to Raw Story, there is a lot of anti-Trump election paraphernalia being sold. The website recently highlighted one such item: 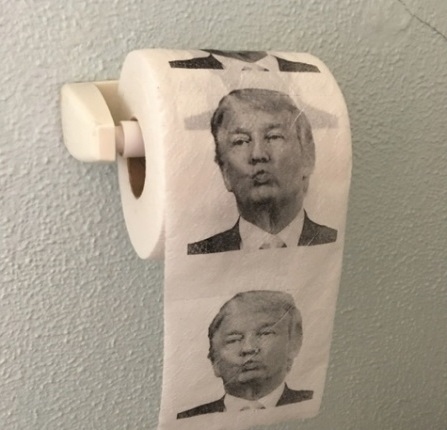 ”The toilet paper rolls, which have been given the brand name 'Dump With Trump,' are being manufactured by Chinese company Qingdao Wellpaper Industrial Co Ltd, which says it started experiencing a spike in sales in mid-February this year.

“'At the start, orders were for around 100 rolls a time, but now we’re getting orders for 5,000 rolls,' a saleswoman told China Daily.”

The company also produces Hillary Clinton bathroom tissue but Trump is outselling that one six to one. Read more here.

JOHN OLIVER – HOW IS THIS NOT A THING?

John Oliver's HBO show, Last Week Tonight was off for the Memorial Day holiday last weekend but as has become a happy routine now, Oliver provided a short, Web-only exclusive.

This one is things that aren't things that ought to be things. You wonder about the kind of minds that can think up this stuff like this but I'm sure glad they exist.

THE GREAT WHITE SHARKS OF THE SKY

That's what they call falcons and some people are using the ancient art of falconry to protect airplanes and birds from one another. Take a look:

”The birds of prey learn to intercept small, off-the-shelf drones — unmanned aerial vehicles — of the type that can pose risks to aircraft, drop contraband into jails, conduct surveillance or fly dangerously over public events,” reports The New York Times.

You can read more about this at The Times.

”Bernie Krause has been recording wildlife sounds, or 'soundscapes,' for over forty years. He's amassed the largest archive in the world, and in doing so, can chart how wildlife sounds have changed over the course of climate change.

“Listen for yourself: the rising silence speaks volumes.”

Even if we do not own an iPhone, most of us have heard of Apple's Siri, the disembodied personal assistant who answers questions in that device.

For the past year or so, Amazon has been selling a device called Amazon Echo that is operated by voice, connects to the internet and various devices around your home. Like the iPhone, Echo involves a personal assistant, this one called Alexa.

Perhaps the device has not been selling as well as Amazon desire because they have now created a web app that let's anyone talk with Alexa and ask her questions.

There is a full description of all that the Amazon Echo does here. You can try out the Alexa part of the Echo here.

You will, of course, need a microphone and speaker in your computer and you will also need an Amazon account – ID and password.

Be sure, when you are done playing with the Alexa app, to click off the microphone image so that you are not broadcasting everything you say over the internet.

Too often, I find myself weeping for what we, humankind, have done to the environment of our one and only planet, at the immensity of the disaster we have wrought and that my puny efforts at recycliing are, in relation to the catastrophe, almost useless.

Some people, however, instead of wringing their hands like me, do something.

“A beer brewery in Florida,” explains the Gajitz website, “has created a set of 3D-printed edible and biodegradable can rings that double as food for sea turtles and other susceptible species known for getting their necks trapped inside of rings.”

Take a look at video:

When I was a kid, I loved tongue-twisters. Surely you remember them too:

It turns out that one of my favorites is about a real person. Check out this about Sally sells sea shells by the sea shore.

As long as the eagles don't get hurt, I'm all for sending them after those drones. I personally think privately owned drones should be illegal.

Wonderful. I enjoy this weekly catch All!

Great toilet paper but I don't think I could stand seeing Trump's face first thing in the morning every morning. Eek.

I hadn't thought about how such a tiny thing as a crumb could damage a spacecraft. Clearly I am not cut out for space travel.

Drones have been a problem here too all the way from them buzzing around people's backyards to a large one that filmed the fireworks at the last 4th of July celebration. We were all hoping a firework would take it out but no. Even for a granny, it's a terrible temptation to haul out your pea-shooter and go for it.

Glad to hear that Obama is onboard with support of Social Security and hopefully will be successful in driving it home to those who really haven't thought it through.

Am with Celia. While it makes an appropriate statement about what I feel toward Trump, I would not want any more images of him in my home than the ones that sneak in through Wifi.

Another interesting Saturday. Thanks, Ronni.

While it might be fun to wipe my bottom on Trump's face, I agree with Celia and Norma that I wouldn't like to have to look at his ugly face every time I used the toilet. It might make me barf.

Drones can be dangerous and used for bad reasons, so I am all for training Eagles to zap them.

I agree with other commenters about Dump with Trump TP.

I loved the Edible Sixpack Holders--what an important and brilliant discovery.

Great posts, Ronni. thank you. Sad one about the sounds disappearing. Happy one about the brewery making an edible six pack holder!
Clearly drones will hold their own against eagles )-: But how about police drones! Oh well.
Dump Trump TP, great gifts!