Home About Archive Contact
Everyday Ageism
When are Aches and Pains Serious?

Were you at Woodstock? I was – but that was only the largest among other music festivals and concerts I attended, each packed with crowds, camaraderie, plenty of weed and most of all, great music.

If, sometimes, performances in that setting were less than ideal, no one cared. It was great just to be spending a weekend in the sun with friends rocking out to favorite bands and performers.

After a few years, music weekends gave way to careers, mortgages and children but summer music festivals rolled on as younger generations took our generation's place.

Now, in what may be a final curtain call for music fans of our age, in October the three-day Desert Trip festival – also dubbed Oldchella – will be held over two weekends at the Empire Polo Club in Indio, California. And look at the lineup: 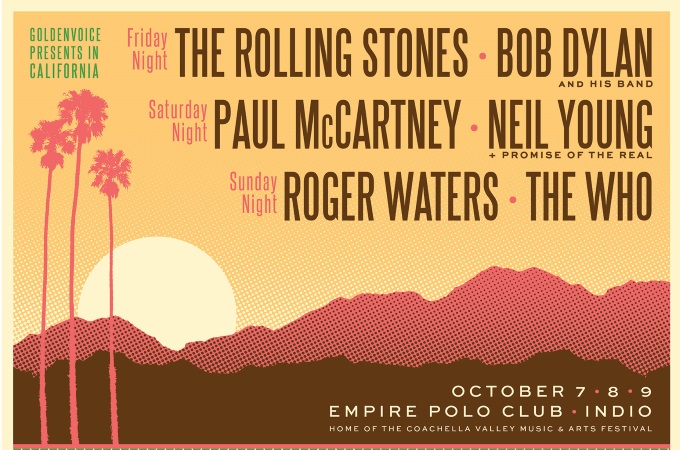 As you might expect for a festival featuring performers who are all older than 70, many of their audience have some physical issues with knees, hips and backs but the festival producer posted on its website that ticket holders could bring their own seating.

Then things changed. After the event had sold out (in four hours), according to a story at Alternet, this bait-and-switch was posted on the website:

”No chairs or blankets will be allowed in the show."

The event promoter, a behemoth called AEG Live - also known as Anschutz Entertainment Group – offered refunds to ticket holders who cannot or do not want to stand for three days straight but of course, that is not the point.

Fans were willing to shell out big, big, big bucks for one last-chance-in-a-lifetime to see favorite rock and rollers they have been enjoying for half a century. For them, it's not the money, it's the concert.

Now, Peter Thiel, who wrote the Alternet story, is calling for the generation who all but invented the sit-in to take themselves to the Los Angeles mansion of the AEG chairman, Jay Marciano, in protest. He has even supplied the street address:

”...it would be entirely within boomers’ protest comfort zone to haul their folding chairs and occupy the area in front of Marciano’s home at 9369 Lloydcrest Drive in Beverly Hills.

“It’s a 3,174-square-foot mansion that he purchased in 2013 for $3.7 million and is now worth more than $5 million. It has, according to Zillow, 'breathtaking panoramic views of [the] ocean and city,' so the peaceful protesters could enjoy the vista while making a statement about consumers’ rights.”

Noting that in 2014, Marciano told Billboard magazine that his company needs to get people to go out more often, Thiel suggested that picket signs at Marciano's home could read: “We Want Our Seats” and “Let’s Sit Down and Talk.”

Cute, and if I lived in Los Angeles, I'd be there. But it is also a serious issue.

In recent years, there has been a growing, worldwide movement to create age-friendly cities with a wide variety of small changes that, in actuality, improve daily life for people of all ages.

Such things as curb cuts to make it easier for people with walkers and wheelchairs. More benches to take a load off people's feet for a few minutes. Longer lights at crosswalks make it safer for slower walkers. Improved signage for old eyes. And so on.

If cities can make such permanent changes - and they do - there is no reason temporary ones could not and should not apply to outdoor entertainment events. After all, AEG's blanket and chair ban is meant to squeeze more people into the space to earn more millions for a company that netted north of $1 billion in revenue last year. They can afford to reduce attendance by a few and still return a sizeable profit.

Theaters built or renovated in the last 25 years or so all include spaces for wheel chairs. Why shouldn't old people (not to mention disabled people too) similarly be accommodated at a music festival? Why is an outdoor setting different from any other performance space in this regard? And why is it all right to advertise a type of seating and withdraw it after the money is collected?

It takes a lot of negotiation to get all the musicians of this stature in the same place at the same time and it is likely that the dates are the only time this year their schedules could be arranged to make it happen.

You can read more at Alternet and at The Los Angeles Times.

Very interesting. Though I would not even consider going to an event like this today, it would be good to know what drove the change in seating decision. While it may be that it was a space thing, just trying to get as many dollars as possible, the event had already been sold out when this announcement was made, and surely they went into it knowing how many tickets would be available, so I'm wondering whether it may have had more to do with insurance requirements. That ultimately drives so many decisions at events and sales/promotion people often don't bother to read all those details before they make promises.

Cathy...
If it were an insurance issue, they certainly would have said so when they withdrew the chair allowance and anyway, they are a big, big, long-established concert promotion company that knows all about insurance up front.

Further, there are thousands of events throughout the United States in the summer (and some in winter too) in public and private outdoor spaces that are free or charge much less than this concert where attendees bring chairs all the time. Insurance is not the issue with them or this Desert Trip festival.

Agree completely, Ronni. What the event's sponsors did is inexcusable, and I, too, wish the performers would refuse to perform unless chairs and blankets are permitted.

That is a really great suggestion that they refuse to perform to show their support for older people and their needs.

Inexcusable rule change since it will obvsiously have a big impact on many of those who bought tickets.

I'll go along with the no chair rule as those darn chairs annoy me when set up in front of me, sitting on a blanket. But, that's just it, why the no blanket rule? I enjoy sitting on a picnic blanket that I keep in the car for just such purposes.

Or, as you suggest, is it just to squeeze in more people?

You will glad to know that this summer, old Forest Hills Stadium will re-open as a concert venue with such talent as Dylan and Billy Joel.
And yes, there are seats. Real seats.

A few years ago Tony Bennett was one of the star attractions at a Jazz festival in CA. My daughter, who was still living there, wanted to get tickets for us. I had to sadly decline because I knew I would not be able to navigate the crowds.

Last year Tony Bennett came to our city and did a solo performance in the University Hall. Again, I had to keep from crying when I knew I couldn't walk from the parking area to the auditorium. At least my daughter was able to attend and bring back her take on how wonderful he still is.

I can only imagine the disappointment when an event featuring their favorite stars was made available and then cancelled. I think I would sue for cruel and unusual punishment.

Terribly greedy performance by the booking company. Thanks for exposing it. Unfortunately, I think this is the way societal faults such as ageism, racism and excessive greed will be corrected--one or a few at a time. It takes a long time to change a culture.

A very cruel move by the booking company. Can't help but wonder how they have handled the wheel chair issue. If no chairs are allowed, it's possible no wheel chairs are allowed. Wouldn't they be subject to accusations of discrimination against the disabled? And possible lawsuits? I would think the venue (the Polo Club) would be involved in this in some way.

Time some of these old groups got modern names...

The Beach Boys should be the Beach Men.

The Who should become Who's Left.

I'm sitting here chuckling at the money I save by having such lousy taste in music. As my mother would have said, I wouldn't walk across the street to hear any of the listed musicians.

P.S. When I read the list I wondered, "Where are the women?"

I saw the concert announcement and would give my eye teeth to attend.... but then I saw where it was, and gave up on the idea!

Nasty trick, and I hope the "sit-in" happened!

Do you think that when the promoters saw how quickly the tickets sold out, even at those high prices, they hoped that the chair and blanket ban would make a lot of people return their tickets? Then THEY could resell those tickets for a much higher price !

What would be great would be for everyone with a ticket to rent a wheelchair for the day..How could they stop you from coming into the concert in a wheelchair?

Rolling Stones should be Mossy Stones...or even Head Stones.

Actually, the Who should be the "Who were they again, I can't remember?"

Author of the article was Peter Dreier, not Peter Thiel.