Remember carousels? I loved them when I was a kid. I still do. I suppose for today's kids they seem tame compared to the thrill rides at big amusement parks. Too bad. They are beautiful pieces of art.

Carousel Works is the last, they say, hand-made carousel manufacturer in the United States. Take a look:

Don't laugh at the headline – well, go ahead but it is serious too. In Africa, lions eat a lot of the livestock farmers are raising. So an Australian came up with the idea of painting eyes on the butts of cows to scare off the lions. Take a look as he explains:

Read more at Gizmodo. And thank Peter Tibbles, who holds forth in the music column here on Sundays, for finding this story.

Many states have enacted laws aimed at keeping minorities (and old people) from voting. This week federal judges revoked those laws in two states:

”The ruling by U.S. District Court Judge Lynn Adelman temporarily eases the impact of a 2011 Wisconsin law requiring voters to show photo identification before being allowed to cast a ballot.

"Although most voters in Wisconsin either possess qualifying ID or can easily obtain one, a safety net is needed for those voters who cannot obtain qualifying ID with reasonable effort," Adelman said in his order.”

As regards the Texas law:

”The U.S. Court of Appeals for the Fifth Circuit, in a close decision among a special 15-judge panel, also sent the case back to a district court to examine claims by the plaintiffs that the law had a discriminatory purpose.

“The New Orleans-based Fifth Circuit, which has a reputation as one of the most conservative federal appeals courts, asked the district court for a short-term fix to be used in Texas in the November general election.”

There are still too many other states with restrictive voting laws but this is good news. You can read more about each decision here and here.

John Oliver's HBO program, Last Week Tonight has been on hiatus but the host makes a point to provide us with our Oliver fix via short Web Extras when there's not show.

This week's was about political endorsements:

A STUNNING BOOKSHOP IN BUENOS AIRES

”Tucked away in Barrio Norte, Buenos Aires is a beautiful bookshop called El Ateneo Grand Splendid. It is built within the almost 100-year-old Grand Splendid Theater, which opened in 1919.

“The theatre was later converted into a cinema and eventually, in 2000, it was converted into the El Ateneo Grand Splendid bookshop, which currently welcomes over one million visitors each year.”

Here are a couple of photographs. 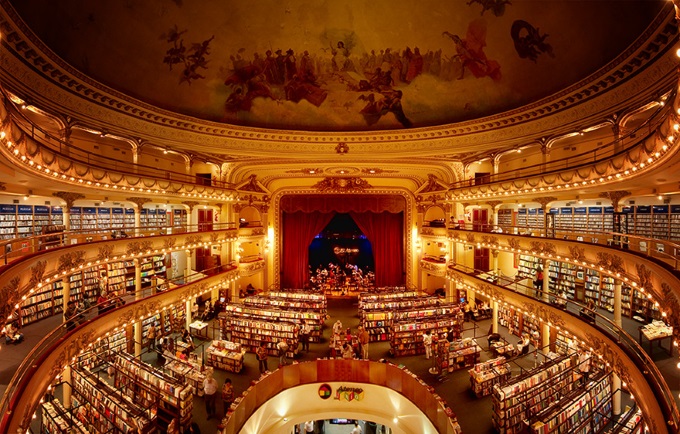 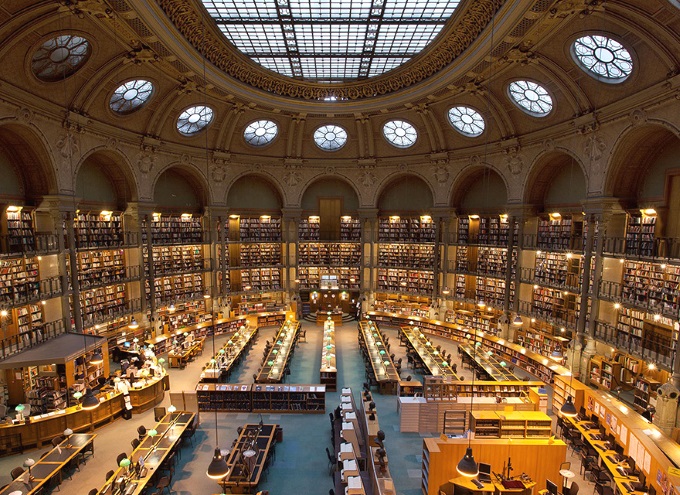 And here is a shot of the exterior: 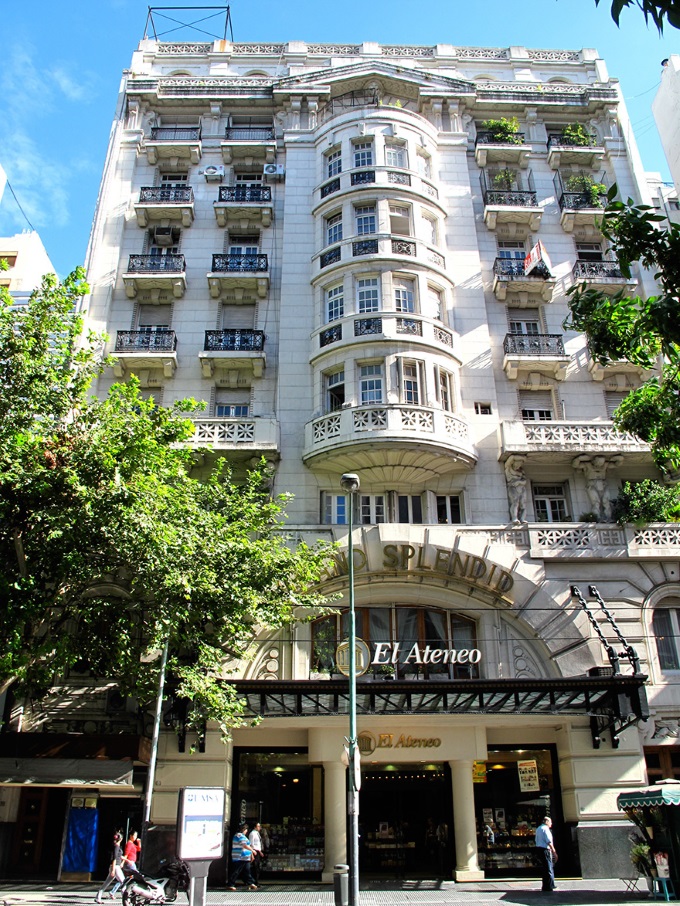 More photos at Bored Panda and more information at Wikipedia.

Here's another from Peter Tibbles – a video from satirist Deven Green in her Mrs. Betty Bowers, America's Best Christian guise taking on the U.S. gun industry.

If you think it is too soon to post something like this, here is Green's response to that question on the YouTube page, and I agree:

“In deference to you 'too soon' folks, I was going to wait until a day not close to a mass shooting (or the anniversary of one) to release [this video] – until I realized that no such day exists in America anymore."

Comedian Deven Green, an alumna of Second City who holds dual Canadian/U.S. citizenship is well known for her satire. Her website is here.

THE COMMA QUEEN: IS “NONE” SINGULAR OR PLURAL?

The Comma Queen is Mary Norris, a copy editor at The New Yorker magazine.

I have always believed “none” is a singular noun requiring a singular verb but Ms. Norris says time moves on and grammar rules can change. Take a look:

Let's just call this Peter Tibbles Day at Interesting Stuff. This cartoon is also from him – a more-powerful-than-you-would-think commentary on how unimportant the three broadcast networks' evening news programs are nowadays. 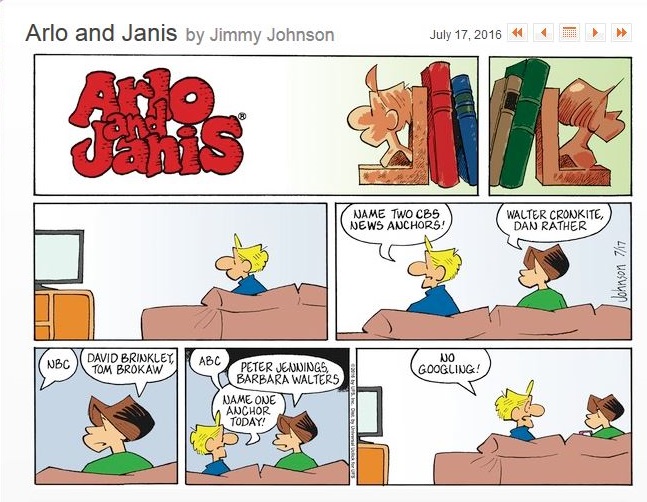 The cartoonist is Jimmy Johnson. There are more from him at GoComics.

Get out your hankies, folks. You will need them in the best possible way. It's an old story that doesn't get old.

Another great Saturday selection. Especially liked the dog rescue story....The Comma Queen was dubbed "private" and couldn't be opened, however. Love the concept of painting eyes on cows' butts--seems to make a lot of sense. We have our own carousel in St Augustine, FL and wonder if it was made by these partners.

Nana...
The early, early morning post had a version of The Comma Queen that would not play. I think this ones works now.

What a great edition! Thanks, Ronni.

Who rescued whom? Absolutely lovely.

Wonderful selection of goodies to start my day. I do still wonder why, if people can so easily get driver's licenses, they can't just as easily get photo IDs from the same facilities. In this day and age I think everyone should carry a photo ID. If you can get to the polls to register and vote, why can't you get to the DMV to get an ID? (Even my 10- and 13-year old grandchildren have state-issued photo IDs.) I'll admit this one has me stumped.

I love "Who Rescued Whom," but it didn't quite turn out that way with me. Instead of me getting out to exercise my rescue, Annie, she emulated me and became a couch potato! But she's a wonderful companion and operates at just my speed. Can't beat that.

Pied Type, some people live so far away from the DMV and don't have any means to reach the facility that they are unable to get a voter ID. Voter ID's cost money and others are too poor to get one. Then some people are too ill or frail to wait in the long lines at DMV's. So those people just give up and don't vote.

There may be a polling place near you, but the DMV's might be in the next town and that's especially true if you are in a rural area.

The story of the two dogs is a tear-jerker with a happy ending. Those are the best kind.

The best one to me was Devon Green's satire. Like Jon Stewart, she uses humor to make real points and she really zapped the NRA with this one.

You outdid yourself, Peter, with your selections. All are good ones.

I'm a cat-person but loved the dog(s) story, also the Deven Green segment.

OMG! You mean Dave Garroway isn't the host of the Today show anymore?

Great collection today! Although some people don't seem to get or appreciate satire, I shared the Devon Green YouTube video, hoping it may be more effective than the countless other things that don;t seem to be making much difference.

I loved the rescue dog post. What an amazing transformation and friendship.

My husband and I are so looking forward to the return of John Oliver tomorrow night, and have appreciated these little videos you've been sharing in his absence.

Glad you warned us about the dog story, Ronni.

Respect for that guy adopting Petey and turning both their lives around.

It's beautiful that the man went back and adopted a second dog after Petey died.

We kept seeing a man walking the beach in Florida. He stood out because of his size, his purposeful gait, his old school type headphones.

A giant man on a mission.

I approached him last winter and found out he's a retired US Marine who a year previous, weighed over 400 pounds.

After his doctor predicted he would soon be trapped in a wooden suit if he didn't do something about his health, the man moved from a northern state to the Indian Rocks Beach, Florida area and then he got busy.

He was a friendly guy. When I asked what kind of music he was listening to, he took his headphones off and put them on my head.

It was a 60's rock station. Rolling Stones.

The man said he had lost 150 pounds from walking, eating properly and lifting weights.

I shook his hand.

We will look for him this winter if we go south.

I saved this from Saturday and just watched all the videos. I'm still crying over the sweet dog stories. Yes, who rescued whom? But I loved them all, and I'm now a Devon fan. :-)