Think about this as you watch: Someone, probably stoned out of his mind one evening, thought this up. But instead of having a laugh the next morning over the silliness of weed-induced ideas, he ran with it and, apparently, thinks it's a moneymaker. It is called Toasteroid.

As you probably know by now, Comedy Central cancelled Larry Wilmore's Nightly Show. Thursday was the final episode but on Wednesday night, one of my top three or four favorite comedians, Louis Black, sat down with Larry's panel. They discussed the presidential campaign.

(Be patient – the video takes a few seconds to load.)

And then, THEN - on Wilmore's final show Thursday, John Stewart showed up for a heartfelt send-off. Take a look:

We need Larry Wilmore and I hope he will settle somewhere new with as much success as John Oliver is having now after, like Wilmore, his many years in a supporting role at The Daily Show. John Stewart is returning to television on HBO in the fall.

RETIREM-ANT AIN'T ALL IT'S CRACKED UP TO BE

This item is from the Sydney Morning Herald via TGB Elder Music columnist Peter Tibbles. Here, in part, is how the story begins:

”Up on the fifth shelf of the kitchen pantry, in the back corner where all the sweet stuff was kept, a team of ants were hard at work. They were the 18th Workers' Division of the Sugar, Syrup and Jam Foragers (Nightshift Unit H)...

“It was tough, thorax-breaking work, and suddenly she stopped, rested her aching pincers, and thought, 'This is ridiculous. I'm 65 days old today! I'm entering the twilight days of my 90-day lifespan and I'm getting tired. But as a sterile female ant, I'm supposed to keep working until the day I drop dead and my fallen corpse gets eaten by my cannibalistic compatriots.

Go read the whole thing here. It's not long and it is a delightful story written by Danny Katz.

DEADLIEST GARDEN IN THE WORLD

”Locked behind black steel doors in Northumberland, England, the Poison Garden at Alnwick Castle grows around 100 infamous killers. From deadly nightshade to hemlock, the only way a plant can take root in this garden is if it is lethal to humans.

“Created by the Duchess of Northumberland, this is one garden where you won't want to stop and smell the flowers.”

Yo-yo tricks have come a long way since I was kid. As the YouTube page explains,

”Ben Conde is a professional competitor in offstring yo-yo and has been practicing yo-yo tricks since he was four years old. See how this trick master prepares for a global competition.”

Auto lenders can steer vulnerable people into crushing debt and there are business news stories lately worrying that car loans have become as toxic and dangerous as the housing market was before the crash of 2008.

On his HBO program, Last Week Tonight last Sunday, John Oliver invited Keegan-Michael Key and Bob Balaban to help him show how that has come to be and at the end – they give us what a used-car dealer’s TV commercial might look like if a little honesty were thrown in.

DESERT LAGOON WITH A LOVELY LEGEND

Amid the rolling sand dunes of a Peruvian desert, an oasis with a magical backstory. Let's let the video explain:

TWO U.S. OLYMPIANS BACK TO BACK

Just to show that Olympians come in all sizes. These are volleyball player David Lee and acclaimed gymnast, Simone Biles, back to back: 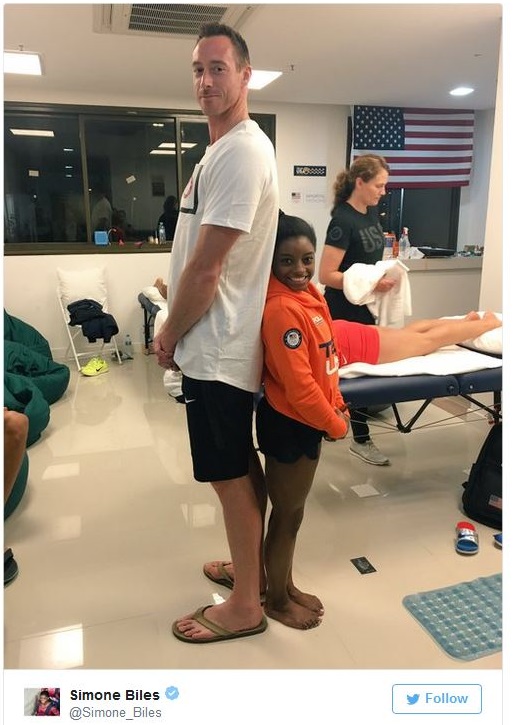 NOT YOUR AVERAGE SQUIRREL VIDEO

This is great. It's real. The squirrel stole the GoPro camera and turned in a video that is the envy of many a human photographer.

It is from Viva Frei who explains that his YouTube channel started as something else and and became “an outlet for me make funny videos, and to do fun, crazy, zany, and occasionally helpful things.” Enjoy.

Gee, I drive a 22 year old truck. Now I have a new song to sing and promise I will stay away from squirrels and usedd car lots.

Kidding about the toaster? Heck no. Think of all those folks who can't wait to see Jesus on their toast every single morning.

I think Larry Wilmore is a national treasure -- but I don't watch late night TV, so my prefs don't register.

Oliver's show was hard to watch the first time around, and i haven't actually viewed it again yet here. The truth he shares about so many topics is one that many people never experience and may have trouble believing because of that. For several years I worked in a program that helped homeless families find housing in a community that has been declining since the beginning of the end of its industrial heyday, back in the late 1970's-early 1980's. This community that, in the 1950's, was once considered representative of middle America has become a collection of dollar stores, payday loan businesses, video gambling establishments, and buy-here pay-here used car lots. I have witnessed dozens of poor families over the years purchase cars that conked out in just weeks to months, with the purchasers on the hook for months or years of future payments and no recourse. A few years ago my mechanic told me about a friend of his who had just opened a used car sales lot like that, who had apparently no scruples and had told him that he, "sold s**t cars to s**t people," and was evidently just fine with that thought. It's hard watching the ground fall out from under people while others stand there wielding pickaxes.

I'm a consumer lawyer and 80% of my work revolves buy-here-pay-here car dealers who prey on vulnerable people. One of things folks don't realize is how refusing to build functioning public transit exacts a terrible toll on the poor, because they are at the mercy of elements that make car ownership mandatory, but the cars they can afford are so dodgy that, more than anything else, it's car dependence that keeps the poor poor.

That much? Dear god - that's awful.

A new comment from “John
Gear” was received on the post “INTERESTING
STUFF – 20 August 2016” of the
blog “TIME
GOES BY”.
Comment:
I'm a consumer lawyer and 80% of my work
revolves buy-here-pay-here car dealers
who prey on vulnerable people. One of
things folks don't realize is how
refusing to build functioning public
transit exacts a terrible toll on the
poor, because they are at the mercy of
elements that make car ownership
mandatory, but the cars they can afford
are so dodgy that, more than anything
else, it's car dependence that keeps the
poor poor.