Home About Archive Contact
Have You Lived the Life You Wanted?
ELDER MUSIC: Send the Kiddies Out of the Room

TO VOTE IS TO EXIST

Graphic designer extraordinaire Milton Glaser created the iconic and ubiquitous I ♡ NY poster in 1977. He says he was never paid for it and didn't realize it would last as long as it has:

Last spring, the 87-year-old created a poster for this year's election with the hope

The election poster is an echo of Descartes' “I think, therefore I am” and, explains Glaser, challenges voters to prove they are among the living. Millie Garfield and her son Steve, sent me this story. Here is Glaser's election poster: 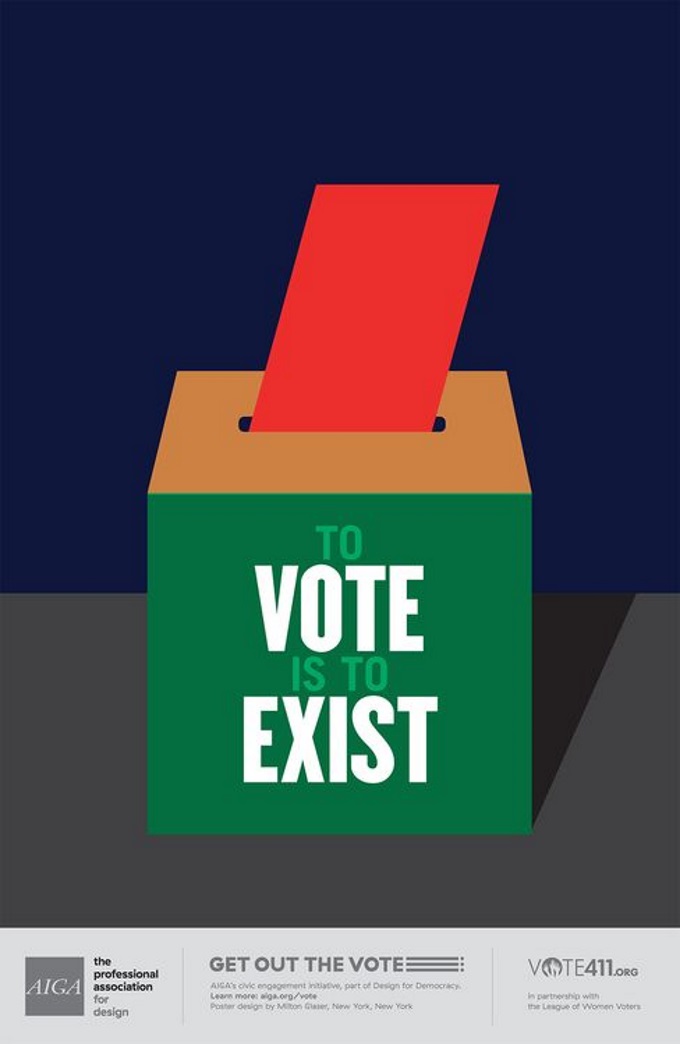 There is a good interview with Milton Glaser at Bloomberg and you will recognize many of has famous posters at his website.

”Dr. Melody Gunn, the former principal of Gibson Elementary in St. Louis, couldn’t figure out why student attendance was on the low side. All of Gibson’s kids were provided free or reduced lunches, and the school facilitated transportation.”

When Dr. Gunn investigated she found that the kids didn't have access to washing machines or couldn't afford detergent and didn't want to go to school wearing dirty clothes. Gunn contacted Whirlpool and here's what happened:

A HAWK, A SNAKE, A PICNIC LUNCH

Thank TGB's Sunday's music columnist, Peter Tibbles, for this video which was shot at a park in his home city, Melbourne, Australia. Maybe the hawk just wanted the park to himself. See what you think:

The renowned biologist and writer Oliver Sacks died of cancer in August 2015 at age 82. A few months earlier he gave his final interview to documentarian Ric Burns.

”My generation is on the way out, and each death I have felt as an abruption, a tearing away of part of myself.” says Sacks. There will be nobody like us when we are gone, but then there is nobody like anybody ever...

“It is the fate, the genetic and neural fate of every human being to be a unique individual, to find his own path, to live his own life, to die his own death.””

Take a few minutes for this. You will be glad you did.

Thank you to Senior Planet for bringing this to my attention.

ON AGE AND AGEISM

In this video, The Atlantic's senior editor, James Hamblin, who is a medical doctor and looks like he is 12, discusses aging and age discrimination with an older colleague, James Goldberg.

Be sure to catch the sequence early on when some off-camera voices talk about Hamblin's youthful appearance the way too many people feel comfortable talking about how old people look. It's fun, funny and enlightening.

A week ago, the U.S. Food and Drug Administration (FDA) announced that it is banning 19 ingredients commonly used in over-the-counter antibacterial soaps and washes. As the Washington Post reported,

"'Consumers may think antibacterial washes are more effective at preventing the spread of germs, but we have no scientific evidence that they are any better than plain soap and water,' said Janet Woodcock, director of the FDA’s Center for Drug Evaluation and Research...

“'In fact, some data suggests that antibacterial ingredients may do more harm than good over the long-term.'”

Manufacturers have one year to comply with the ban. Further, reports The Post,

”The FDA's final rule does not affect consumer hand sanitizers, wipes or antibacterial products used in hospitals and other health-care settings. In June, the agency requested data on the safety and effectiveness of certain ingredients in those products, but emphasized it was not barring any of the items at that time.”

You can read the FDA release at their website.

John Collins is called the Paper Airplane Guy. He studied origame and aerodynamics to be able to design the sophisticated paper projectiles he makes. The YouTube page tells us that

”His record-breaking plane flew 226 feet. To Collins, paper airplanes aren't just for making a ruckus in class, they can teach us a lot about science.”

As Bored Panda explained, some good-hearted fellows at the California Wildlife Center (CWC) came to the rescue of a mockingbird with a foot condition that made it difficult for the poor thing to walk around, perch or grasp objects. Take a look:

I can understand how looking so young might be a problem for a doctor (and so many of them to me now look like unqualified college students!). But as a working adult, it didn't bother me at all to have people think I was younger than I actually was. I still cherish the day a supervisor was really talking down to me, belittling my expertise (both of us in journalism), and somehow the subject of ages came up. When it turned out I was 6-7 years older than he was and thus more experienced, he shut up immediately and never spoke to me that way again.

I've always enjoyed the Atlantic videos with James Hamblin, I find him so likable. My curiosity got the best of me and I looked it up - as of this past February, he is 32. Wow.

The cute little Mockingbird looks so proud of his new shoes.

I loved the story about a washing machine in schools. Sometimes it just takes a little observation and investigation to solve a problem.

Glaser's graphic art is so creative. He must have a wonderful imagination.

When someone says I look young for my age (73) I say, "What's wrong with looking old?"

Thank you, Ronni. I enjoyed all today's stories and videos. I was homeless briefly at age 16 when things fell apart for my family and my parents and five siblings lost our home, and had to make our way back from Texas to Illinois, where we relied on relatives for support for a while. At least at that time in the mid 1960's, manufacturing jobs were fairly abundant in the midwest and my parents both found factory jobs and eventually moved up from entry-level jobs to better paying positions and were never homeless again. However, our family was traumatized during that time and things were never the same afterwards. For several years, I worked with homeless families and individuals, and it warms my heart when I learn of things like the discovery of a correlation between having no clean clothes and school truancy/dropping out. I mostly don't understand why it takes so long to realize these things, but I am always glad to learn when a light bulb goes on and something is done. Baby steps are better than no steps at all.

I also loved the Oliver Sacks interview. What a remarkable man he was.

The bird shoes are brilliant! Again, a pretty simple solution to a big problem for a bird. So glad people are working on things like this.

Thank you, especially for the washing machine brainstorm (I forwarded the link to school people), Oliver Sacks, and the snowshoes brainstorm.

The hawk and snake story reminded me of the myth of how the Aztecs came to settle in the area that is now Mexico City. They were told to travel until they saw a lake where an eagle would have a snake in its mouth (I think in their case, an eagle would be on top of a cactus with a snake in its mouth). I wondered, as I watched the video, if the scene was indicating a new place to start an empire. (-:

It has long worried me that the ubiquitous use of anti-bacterials in homes might contribute to the growing incidence of anti-biotic resistante in our world. Glad to see them go, though I'm afraid my Sister-in law will stock up so she can continue being "Mrs. Clean" the germ fighter.

Having a snake dropped on you in Oz is much more scary than here. So many are dangerous there, while ours are mostly benign.