WHY RULINE IS WITH HILLARY

Now don't go getting all up about this being a list of women's firsts or tell us that it's not right to vote for Hillary just because she's a woman.

Forget that for a moment and just look at this campaign video. Being a woman is part of who Hillary is too.

Thank Jim Stone for sending this.

SAMANTHA BEE IS BACK

She and her TBS show returned from hiatus this week in top form. Here is her opening survey of what happened in politics during the time she was gone from the TV screen.

Remember – Samantha is not always safe for work and small children. But she sure is funny.

In our discussion of hearing loss and hearing aids this week, reader Wendl Kornfeld left a comment about how difficult it is to understand young women who practice “vocal fry” which, believe it or not, is the professional term.

I had never heard the phrase so I tracked down some information on the interwebs. Here a video from CBS Sunday Morning about it:

The affectation seems to be closely associated with the Kardashians about whom I know almost nothing. If you are interested, click here for many more videos about vocal fry.

COVERING THE CAMERA ON YOUR COMPUTER

Remember when it was revealed that Mark Zuckerberg, who made his billions collecting personal information about Facebook users, taped over the camera on his desktop computer. 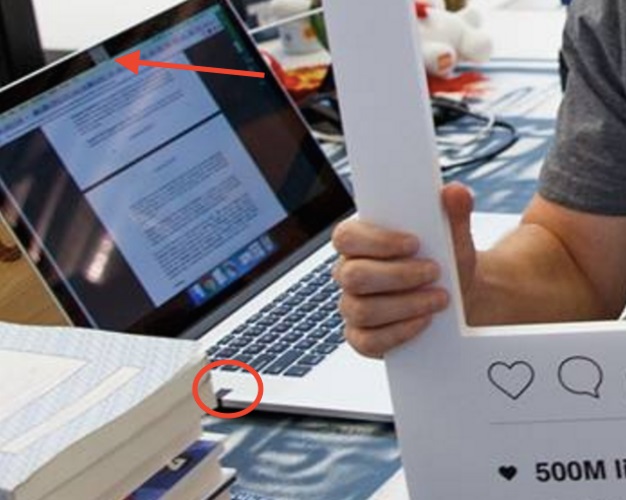 Now we learn that FBI director, James Comey, does the same thing. As reported in The Hill:

“Comey was pilloried online earlier this year, after he revealed that he puts a piece of tap over his laptop camera to keep away prying eyes. The precaution is a common one among security advocates, given the relative ease of hacking laptop cameras...

“Comey was 'much mocked for that,' he acknowledged on Wednesday. But he still uses the tape on his laptop.

“'I hope people lock their cars,' he said. 'Lock your doors at night… if you have an alarm system, you should use it.'”

Not that I believe anyone is interested in hacking into the webcam of an old woman but just to be safe, I tape over the camera on my computer too, as you can see in this photo. 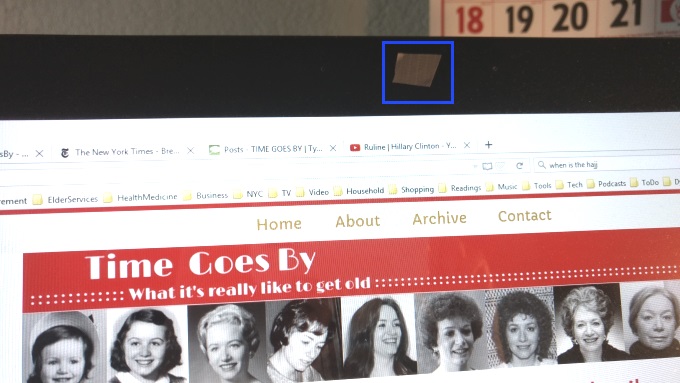 LIGHT POLLUTION AND THE NIGHT SKY

According to this video, 88 percent of the world's population has never seen the Milky Way due to light pollution.

You and I are old enough that even in most cities when we were kids, we could still see the stars but it's doubtful we've been able to do that for many years. In fact, I remember the last time could see them - in the mid 1970s in upstate New York.

Now, two towns in Colorado have brought back the night sky. Take a look:

And just for some added fun, here is the same triple spiral in reverse:

ANSWERS ABOUT THE HAJJ

Every Muslim is required to make the pilgrimage to Mecca, called The Hajj, at least once in his or her lifetime. This year's Hajj ended last Wednesday.

Diaa Hadid, a New York Times correspondent at the newspaper's Jerusalem bureau, attended the Hajj this year returning several videos of the religious event where two million people show up each year. This one is an excellent story filled with explanations and answers for people like me who are mostly ignorant of it beyond the fact that it exists.

You can read The Times story here and see more of Ms. Hadid's Hajj videos here.

Uber began testing its self-driving car in Pittsburgh this week with real riders.

Washington Post reporter Brian Fung got a demo a few days earlier and says that it works “at least under ideal conditions.” Here's the video:

Read more about it here.

A GUY AND HIS GOOSE

Reader Richard Lombard sent this video. This man and his goose are well known where I live in Lake Oswego, Oregon, and last week they were featured on the CBS Sunday Morning show. It's so cute. Take a look:

As usual a wonderful start to the w/end. Thanks, Ronni. And I want to be like Ruline when I grow up. Wow, what a tribute to women. She sounded just like my own mom who experienced all the same changes thru the century......she was 99 when she died & like Ruline she often remarked on the changes she had seen. She loved Hilary & was devastated when she lost the primary to Mr. Obama.
Have a great w/end everyone, Dee :)

What i find even more annoying than this vocal fry is the habit that most young women have these days of NEVER moving their lips when they speak. It all comes out as one long stream of mumble. With my severe tinnitus, i can not understand a single word and i have to keep asking them to repeat. I find this especially annoying among yoga teachers who mumble their instructions, believing they are providing a calm, soothing environment. Even when i'm at the front of the class i cannot hear them. Enunciate, people!!

Great lineup this week! Loved Samantha Bee (I somehow never catch her show). The Westcliffe thing I didn't know about, and I live in Colorado. Get away from the city lights, espcially higher in the mountains, and the night skies are amazing. Vocal fry? Ick. I consider it part of the Valley Girl stuff that I hate. Self-driving cars? No thanks. The goose was delightful. Oh, and about the tape on your computer. Test it with a camera app to make sure it's opaque enough to work. Blue painter's tape, for example, does not work. I need to find something else.

Loved what those Colorado town have done. Even in a town as small as Walla Walla (in a large farming area) you need to get well outside of the borders to really see the sky. Here's hoping Ruline gets her wish! Great Saturday posts Ronni, thanks.

Wonderful stuff, especially "Light pollution and the dark sky" and "A man and his goose." I always enjoy a domino cascade, and the Triple Spiral Domino Cascade forward (and in reverse) were a real treat.

Samantha Bee was hilarious and right-on in terms of the election. "Answers about the Hajj" was also quite well reported.

Now I need to share these with my husband.

Using a hole punch, I punched a dot out of the sticky part of a post-it to use to cover the camera on my laptop.

Ruline is a woman after my own heart.

Samantha Bee may be irreverent, but she sure is funny.

I wonder if the Goose is hunting for his Gander.

Another reason why most people haven't seen the Milky Way (okay, light pollution is the main factor) is that most of the Milky Way is only visible from the Southern Hemisphere. I'm always disappointed in the stars I can see whenever I visit the antipodes (that's my antipodes, of course).

Thank you, Ronni, for another post full of all sorts of good stuff. I admire Ruline's enthusiasm and energy and I hope her bones are right (and all right).
Again, it's not just our ears ... it's the trend of ignoring enunciation that both males and females have adopted.
Samantha Bee was good and I was impressed by the dedication of some of the inhabitants in Westcliffe and Silver Cliff and by the stars they are able to see.
Diaa Hadid's reports on the Hajj were, indeed, interesting.
Thank you, Peter, for Hevesh 5's wonderful domino cascade ... the time and patience and skill required for putting all that together is mind-blowing. And, belatedly, Happy Birthday, Peter!