Home About Archive Contact
I Will be in Mourning for Awhile
ELDER MUSIC: Singing with Van

The New York Times tells us this guy, Deshun Wang, is known as “China's hottest grandpa” and, indeed, he is a charmer, hard to resist. Take a look.

Read the rest of the story at The Times. It will make you feel good.

I've “known” Chuck online and via email for at least a decade, admiring his insight into boomers and and his humor about old age. A short while ago, this appeared on his Huffpost page titled Mouth Hunters. Given my two-year, ongoing odyssey with teeth, I understand entirely:

I’ve been thinking about buying this house. Then I was told that it might be time to buy a new mouth.

I can’t afford both.

Let’s say I go with a new mouth. I don’t know if I should buy a mouth that’s move-in ready or a fixer-upper.

A move-in ready one would have great curb appeal. And of course an open floor plan is a must.

The downside: It would be way over budget – and even though brand-new, would have no resale value.

A fixer-upper would be much cheaper, at least on paper. But I’d be taking my chances. Digging into drywall could expose mold and rot. I might have to demolish the whole thing, except for the front. The front might have good bones but I’d probably have to replace a few boards and give it a big-ticket weatherproofing paint job.

Or I could go with the house. The problem would be that after a cleaning, check-up and X-Rays, no honest contractor would guarantee their work because the place is so rickety. A sneeze would knock it down.

It’s all part of getting old. When I was younger all I had to do was move into some place and not forget to floss and brush it twice a day.

Chuck's blog is aimed at marketers who target boomers but even if you're not one of those, you'll enjoy this blog post about how marketing people are too ready to ignore old people and hey, a lot of them actually have money to spend. It's worth your time to take a look.

EDITORIAL NOTE: Here are four short items related to our recent election I have saved up for us. The results of this vote are not going away for a long, long time, folks. We need to be aware.

VAN JONES AND THE WHITELASH

During an election-night discussion on CNN, author, political activist and well-known influencer Van Jones schooled a Republican surrogate about the meaning of the outcome of this campaign. Take a look:

MOST PEOPLE WORLDWIDE WOULD TRADE FREEDOMS FOR SECURITY

On the precipice of a new regime in the White House that has revealed little in the way of serious policy positions, I was reminded of this recent survey involving “about 1,000 respondents in each of eight countries — the United States, France, Britain, Turkey, Egypt, China, India and Indonesia." Emphasis is mine:

”The survey, commissioned by the Center for Strategic and International Studies (CSIS), showed that many people think their governments are not doing enough to combat violent extremism.

“And a majority in every country polled, including the United States, overwhelmingly approved all 21 options presented to them — among them, requiring identification cards for citizens and visitors; rigorous screening of immigrants; bans on incendiary religious speech; and monitoring of phone calls, emails and social media.”

The last item was the least popular idea. Nevertheless, “overall, 7 in 10 people deem it a good idea. Even in the United States, where the idea had less support, 6 in 10 back it.”

It took a much lower percentage than that to choose the new president-elect. You can read more at the Washington Post.

GET IN TROUBLE – GOOD TROUBLE

Like the item directly above, this one is a bit dusty, a month or two old, but is pertinent now. It involves a beautiful interview by Late Night host Stephen Colbert with civil rights icon and U.S. Representative John Lewis.

Listen to him and take heed about stirring up trouble. Also, don't miss the ending; it's a delight.

The new administration has already launched a transition website. Note the .gov URL combining a campaign slogan with an official governmental web address.

The idea, apparently, is to provide regular updates on what the new administration is doing during this interim period or, at least, what they want us to know about what they are doing.

And look at this: you too can aspire to work in the the new administration. Information is here and you will find the online application here.

I know, it sounds like a yawn. But as is now routine with John Oliver on his HBO program, Last Week Tonight, there is no such thing as dull. You laugh, you cry, you learn and it is always fascinating.

Apparently, “amezaiku” - or candy crafting - is an ancient Japanese art of carving and painting lollpops into intricate edible sculptures that is in danger of disappearing.

Twenty-seven-year old Shinri Tezuka is, according to the YouTube page, one of only two amezaiku artists remaining in Tokyo. Tezuka hopes his elaborate goldfish, frog and octopus designs will inspire the next generation of candy crafters to keep the tradition alive.

THE PIANO GUYS AT PETRA

Petra, in Jordan, is the number one place in the world I would like to see. I have missed it on each of my trips to Israel and I'm not likely to get there again. It is an astonishing place.

There is a short overview of the ancient city on the YouTube page of this video. In part, it reads:

”Petra is home to over 800 monuments, buildings, halls, tombs, temples, and gateways sculpted from kaleidoscope sandstone. Its access is guarded by a narrow, protracted 1,000 ft high (300 meter) canyon.

“This remote desert city thrived in its prime because of an intricate, ingenious aqueduct system that carried water over great distances to store in cisterns. Arab tradition believes that Petra was the site where Moses of the Old Testament struck the rock to draw forth water.”

Recently, two men who call themselves The Piano Guys, John Schmidt on piano and Steven Sharp Nelson on cello, went to Petra to perform including, at about 50 seconds into this video, one melody from Rimsky-Korsakov's musical telling of the ancient Middle Eastern tale, Scheherazade.

If you would like to know more about Petra, just type the name into your favorite search engine – they is plenty of fascinating stuff to know about it.

”The Michigan judge who ordered the dog be euthanized said he had no choice,” reported the Washington Post.

“A neighbor had testified that he saw Jeb standing over the lifeless body of his Pomeranian, Vlad. And state law requires that dangerous dogs — ones that cause serious injury or death to people or other dogs — be destroyed.

“But Jeb’s family did not believe he was capable of killing Vlad, said Kandie Morrison, who had given Jeb to her disabled father for use as a service animal.

“This was a dog whose body 80-year-old Kenneth Job relied on to hoist himself up when he fell, she said; a dog that ignored the rabbit he lived with.

So the body of the Pomeranian was tested for Jeb's DNA and like too many mis-convicted (is that a word?) humans, Jeb was exonerated and is now back home working as canine caregiver to 80-year-old Kenneth Job. 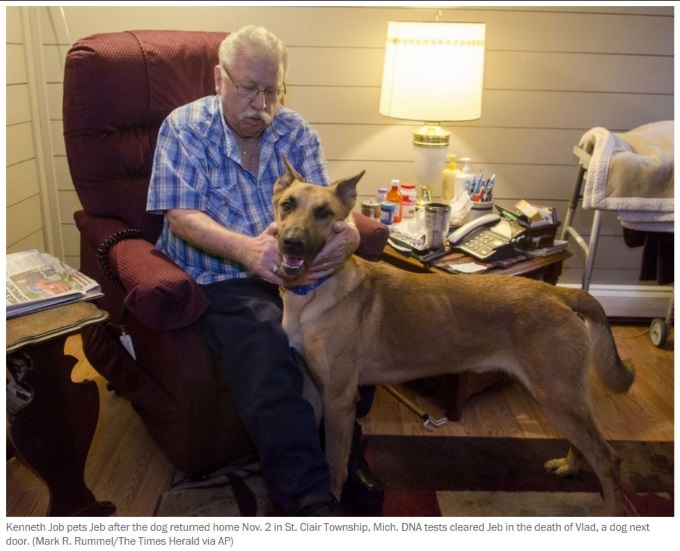 Of course, the story is more complicated than I have told you and if you go read the whole thing here, it will make you feel good.

Great stuff. Thanks for pulling this together!

As always, a great way to start Saturday especially this week.

Thank you, Ronni, for this and for helping us return to sanity.

Piano Guys in Petra--fabulous! Coincidentally I posted a photo of my memorable visit to Petra on my Instagram page today @ruths711. I am very blessed and fortunate to have had the opportunity to go there. However it was overrun with tourists when I was there, so I will watch this wonderful musical video over and over again! Thanks Ronni!

What an absolutely wonderful collection of moments for reflection, for escape and for pure joy! Much needed ... and I have to confess I was surprised, and very grateful, that you managed to post this. Thank you, Ronni.