Here is another of those heartwarming holiday television commercials. Thank TGB reader Heidi for this one.

Too bad TV advertisers aren't this good at storytelling year round.

Last Monday, I posted a story about the latest Republican attack on Social Security. You'll be hearing a lot more about this but for now:

One of the people I quoted is Nancy Altman who knows more about Social Security than almost anyone and has fought fiercely to secure and expand it for many years. She is relentless in working for all American old people.

This video is from September where she is speaking about a nation-wide coalition that works to protect the program. There is nothing new in this video; I just thought you should see a few moments with this tireless, fine woman – a hero to all Social Security recipients.

MONKEYS COULD TALK IF THEY WERE SMARTER

Or so says at least one researcher. 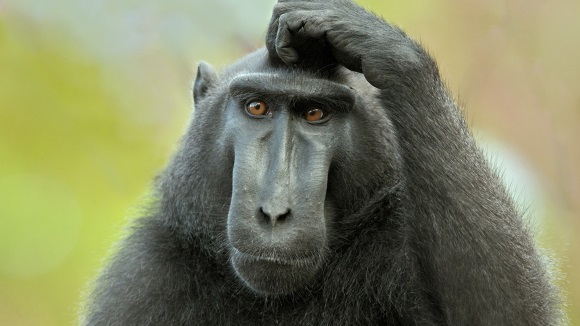 You probably know the story of the the gorilla Koko who is so proficient at sign language. That is remarkable but the ultimate would be to actually speak with another species, to have a real conversation.

Now, according to The New York Times, it has become known that various kinds of primates have the vocal equipment for speech, but their brains are not up to the task:

”The two researchers argue that the key to the acquisition of speech lies somewhere in the brain.

“'If they had the brain, they could produce intelligible speech,' Dr. Ghazanfar said.

“Our ancestors may have evolved special brain circuits that allowed them to learn new sounds as babies. Humans also developed a special set of nerves for the fine motor control of their vocal tracts.”

Other researchers disagree, believing that primates do not have the necessary vocal equipment to speak. You can read the whole story here if you are interested.

Everything you every wanted to know about the inner workings of London's Big Ben clock on the Parliament Building. From Darlene Costner.

HOW YOUR BODY KNOWS WHAT TIME IT IS

For most of my life, you could wake me from a deep sleep and I could tell you within a few minutes what time is was. I'm not so good at that in my old age. But during waking hours, I don't often need a clock to know what time it is.

”Being able to sense time helps us do everything from waking and sleeping to knowing precisely when to catch a ball that’s hurtling towards us. And we owe all these abilities to an interconnected system of timekeepers in our brains....Marco A. Sotomayor details how human bodies naturally tell time.

PHONE CALLS BETWEEN PRESIDENT OBAMA AND *

There are several more “recordings” here.

EARTH AT NIGHT FROM THE INTERNATIONAL SPACE STATION

This video is a gorgeous time lapse of earth as seen at night from the Internatiional Space Station. Here's what NASA says about it:

“Many wonders are visible when flying over the Earth at night. A compilation of such visual spectacles was captured recently...and set to rousing music. Passing below are white clouds, orange city lights, lightning flashes in thunderstorms, and dark blue seas.

“On the horizon is the golden haze of Earth's thin atmosphere, frequently decorated by dancing auroras as the video progresses. The green parts of auroras typically remain below the space station, but the station flies right through the red and purple auroral peaks.

“Solar panels of the ISS are seen around the frame edges. The ominous wave of approaching brightness at the end of each sequence is just the dawn of the sunlit half of Earth, a dawn that occurs every 90 minutes.”

Tiny, little mouse-sized stores and restaurants have been popping up on the streets of Malmo, Sweden. Here is one to give you the scale: 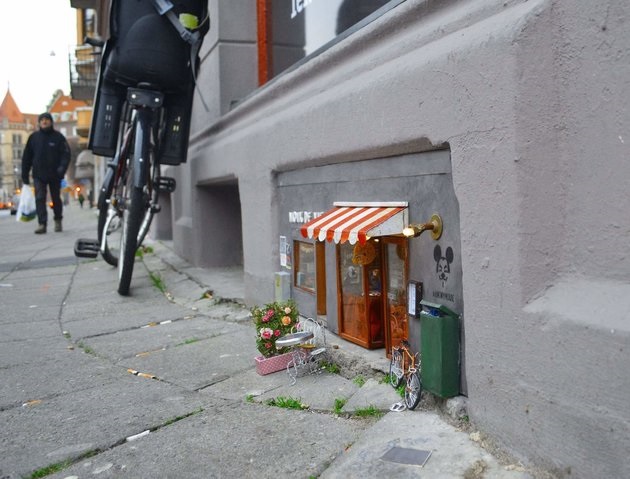 Here is another of the same mouse restaurant in closeup. 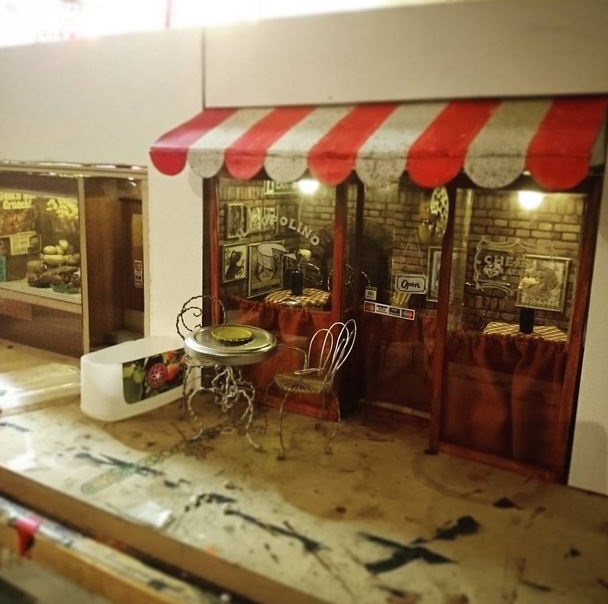 According to Huffington Post, these are being created by an artists' group called Anonymouse:

“'It’s just too darn charming to imagine a world where mice lives parallel to ours but just slightly out of sight,' said one representative of the artist group Anonymouse MMX, who wishes to remain anonymous. (The group has no connection with Anonymouse.org, a site devoted to online privacy.)”

There is even a mouse-sized menu on the wall next to the restaurant: 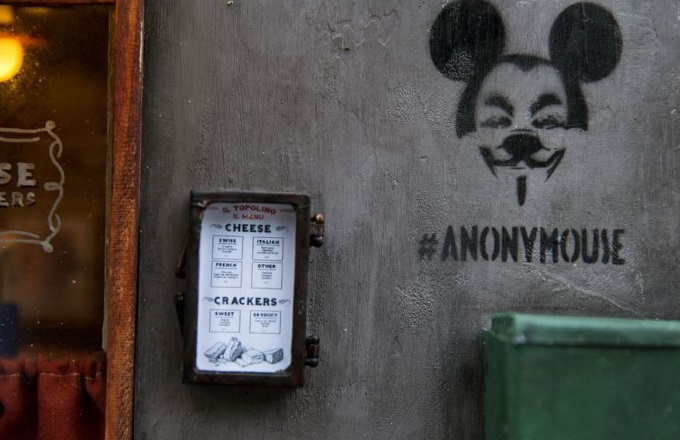 And here is another photo of a mouse-sized charcuterie with a movie poster on the wall. 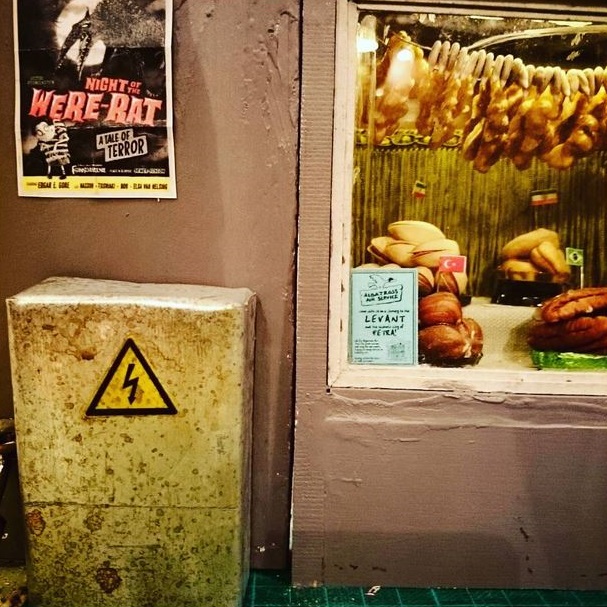 You can find out more and see additional mouse-size locations at Huffington Post, Bored Panda and the Anonymouse Instagram page.

A large portion of the United States is living in frigid temperatures this weekend with piles of snow. We even got a small amount of snow here in northwest Oregon.

Simon's Cat is here to show us how to survive winter.

Thank you, Ronni. And thank you, Nancy, Darlene and NASA.

Wish the NASA video hadn't been sped up so much, but it is still spectacular. You'd think with all the footage NASA has provided of our beautiful planet, no one would doubt the need to do everything we can to protect it. Or at least leave alone those trying to protect it.

The little mouse things would be destroyed quickly around here I'm afraid.

Got a kick out of the Pres. and DT and that surprises me as I don't find DT funny at all.

As for the brain, I know I should not sleep with the TV on, bad habit I haven't shown interest in breaking. My time and days are shot all to heck, lucky I have calendars and clocks.

Loved these. Grandpa learning English made me teary. We have some tiny fairy houses around town by people's house but I too doubt they or the mouse houses would last downtown here. Too bad for us. I'm so grateful for Nancy Altman.

I am so glad I found this blog. It's wonderful! Thank you!!

As far as animals being able to talk, how does one explain parrots. They certainly have the mechanics to do it, perhaps they just don't want to communicate with us idiots.

A generous collection of things to entertain us. I'm in the middle of a nasty cold-comes from living with a school age kid they say. So I have been sleeping away our snow days, snow usually doesn't come to Portland,OR until January so this was unexpected. And portlanders really don't know how to deal with it.
I'm dealing with it the way Simons Cat suggests. Go to bed early and sleep in.
This is my second winter following a Osteoarthritis diagnosis by my new doctor. Now I know why my fingers, knees and neck all ache so bad in the winter. All places with noticeable OA buildup.
It sucks.
Elle

Thank you, Ronni! another great post to keep us informed and entertained. I have to echo Annie Dragonfly. This blog is wonderful and I'm glad I found it. I regret the years I didn't know about it.

Love the tiny mouse houses and businesses. Thanks.

Although I had seen it before, Grandpa made me cry. Obama and * made me laugh at *'s idiocy. Love Simon's cat, and the NASA video made me almost nauseous with its speed. But all in all, a good compilation of "interesting stuff."