Home About Archive Contact
Only 12 Percent of Elders Have Dental Coverage
ELDER MUSIC: 1957 Yet Again

DON'T EVER AGAIN DOUBT WHAT YOU CAN OVERCOME. EVER

It's been several months since Darlene Costner sent this video and I've waited too long to show it to you. It's a promo for the Rio Paralympics last year. Not the Olympics; the Paralympics.

This is one of the most awesome but even more important, joyful music videos you've seen. Most of us can probably do more than we think we can and I don't mean just physically. Enjoy. Be inspired.

The YouTube page explains that the Breckenridge Resort in snowy Colorado has its own canine rescue team, the first line of defense for people when an avalanche or other disaster strikes.

New research released on Wednesday by Pew Research asked people in a bunch of countries what it takes to “truly belong” in their countries.

”Thirty-two percent of Americans said one should be Christian to really be American, compared to just 13 percent of Australians, 15 percent of Canadians and 15 percent of Europeans who felt the same way about belonging in their homelands,” reports the Washington Post.

One third of Americans says these things. I am so embarrassed. You can read more here.

A week ago, President Trump issued the now-infamous executive order banning Muslims from entering the U.S. For all the protests, many Americans agree with the president.

According to Pew Research last fall, a majority of Americans say that the U.S. does not have a responsibility to accept Syrian refugees and there is a lot of additional evidence that America's xenophobia is nothing new.

In 1938, 65 percent of Americans told Gallup that the persecution of Jews in Europe was at least partially their own fault, and nearly three-quarters opposed allowing 'a larger number of Jewish exiles from Germany to come to the United States to live.'”

In 1939, according to HuffPost's research, 67 percent of Americans disapproved of taking in 10,000 refugee children from Germany.

In 1984, 62 percent of Americans said the number of refugees entering the U.S. should be lowered either “a little” or “a lot”:

There is much more such evidence through the years that you can see in more charts at Huffington Post.

LIVING OFF THE LAND IN NEW ZEALAND

According to the YouTube page, Warrick Mitchell lives with a small community of others in one of the world's most remote locations: a national forest in Fiordland, New Zealand.

His home is four day's walk from the nearest road and is otherwise accessible only by boat or small plane. But it is gorgeous, so gorgeous. Take a look.

HOW TO BUILD AN AUTOCRACY

If you watch cable news channels, you might have seen David Frum. He is a long time journalist, a former speechwriter for President George W. Bush and a senior editor at The Atlantic magazine.

He has written a long cover story for the magazine's March print issue titled, “How to Build an Autocracy” in which he explains “how it can happen here.” This is a video lead-in to the story he recorded:

You don't need to be a subscriber to read the piece. The Atlantic released it early to everyone. You will find it here.

The redwoods are Earth's oldest trees and due to California's years-long drought, they are stressed. As the YouTube page explains, to save them,

”Anthony Ambrose and his team of researchers climb several hundred feet into the canopy, braving (sic) life and limb in the name of conservation.”

That and the photography is breathtaking.

THE RELEVANCE OF DR. SEUSS TO OUR CURRENT POLITICAL TROUBLES

Did you know that Theodore Geisel, Dr. Seuss, worked as a political cartoonist for a couple of years during World War II? I didn't. In particular, he opposed the “America First” movement.

The Atlantic (yes, again – you really should be reading this magazine; they do good work) recently published a story about that episode in Geisel's life and resurrected a few of those cartoons. Here is one: 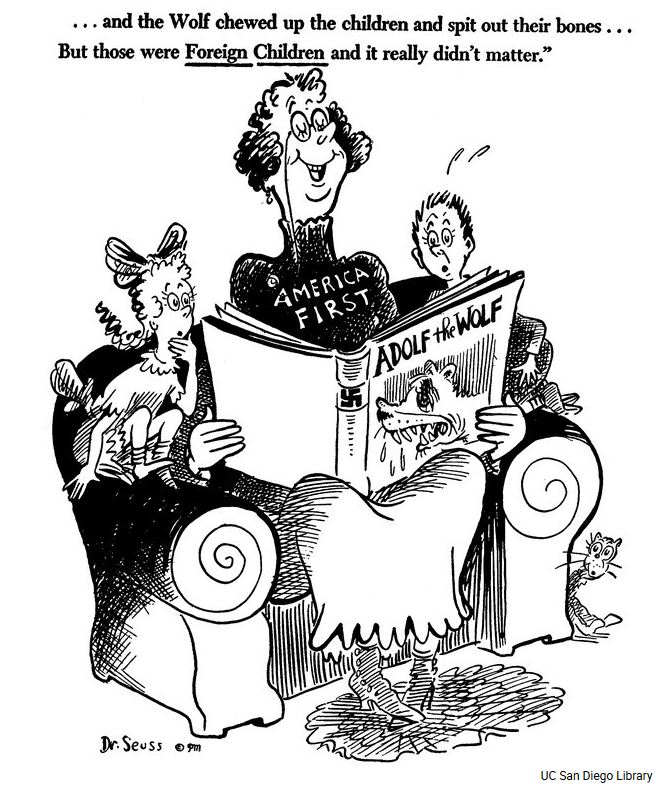 Amazingly relevant now, don't you think? You can read more here where there are also a few more of Geisel's World War II cartoons.

The resurrection of the word “resistance” is perfect for what is required of us in the times we are living through now. But cats don't need to be reminded; they are born knowing all about resistance.

That cat is hilarious. Made my day. Thanks Ronni.

However the stats & the commentary did sober my attitude & did make me sad. My grandparents were immigrants & endured some awful things even in a small town full of immigrants from all over Europe & the middle east. I had believed that most of the bias had softened until I began dating in my late teens & my date's Grandfather called me a "mackeral snapper" because of my religion. I guess I have mistakenly believed that we had overcome such nonsense, but polls seem toll say otherwise. Dee

Yes, a lot of "uppers" and "downers" today. Felt a little bit like being on a roller coaster, which is, unfortunately, where we are these days ... only the plunges are deeper and faster and harder and scarier than the rises.
But we WILL rise and we WILL resist.

The Dr. Seuss political cartoon really hit a nerve with me. I considered posting it to my FB wall then decided against it. There is just so much tragedy being posted on FB that I couldn't bring myself to add to it. I haven't yet figured out how to give voice to my anguish over all that is happening in our country. I know that we are not a democracy right now but it seems as if no one can stop or change the president's dictatorial march to fascism.

And I thought the people who elected DT wanted to return to the 50s! Ha, they were interested more in the 30s apparently. We sure are living in "interesting times," as goes the old wish of not-exactly good luck, "may you live in interesting times."

Am beginning to see some light, thanks to this blog, the marches and resistence, and, the latest, the 11 minute Noam Chomsky interview segment on youtube. Yes, we are not who we would like us to be, but, as Chomsky pointed out, the bar HAS been raised, and we actually are a kinder America than those who nearly wiped out the Native Americans, then imported slavery. He points out that this is another round, another cycle, we just need to keep our shoulders to the wheel. Now, there's the rub (oops, ha ha) for some of us, who don't really want to, or are unable to put the old, sore, arthritic shoulder to the spinning wheel. Well, we can resist in many, many ways!

I'll be saving the cat video for those times I need a good hearty laugh! Those times occur pretty regularly now so will be watching that contrary cat often. Thanks for a very interesting lineup today, Ronni. many items of interest.

The story on the California Redwoods made tears come to my eyes. I was born in San Francisco and lived in Northern California for nearly 50 years so the segment on these magnificent trees was shattering. Our family camped nearly every summer among those giants and many of my fondest memories are there, in that 'like no other' place.

Great post Ronni. The Atlantic is one of the first things I read each morning. Love to be in a place like Warrick Mitchell's home but I couldn't do it physically for some years now. Still, very beautiful place. Glad he shared.

Terrific post today, Ronni (and Darlene), evoking a range of emotions. The athletes, musicians, and other performers are amazing, considering the efforts and troubles of getting to their place of accomplishment.

I believe that in the determination of resistance, we must not only know of that which is being resisted, but razor-sharp aware and always focused on the near goals and far purposes(understanding, respect and equality for all, including the inanimate).

Laughed til crying at the cat video - the laughter from the video folks hugely encouraged that.

I had to research a bit to to learn that sequoias and redwoods are closely related but not the same. Nevertheless, my trip to Muir Woods, where I walked among redwoods, was unforgettable and awe-inspiring. I can liken it only to being in a great cathedral. We must protect these trees!

The Seuss cartoons were a revelation. I had no idea he'd done that. Not surprised it was in The Atlantic, which I greatly admire but for which I often don't have the required attention span.

The cat video ... well, what can I say. I've been a cat owner/lover all my life and they never fail to entertain.

The Paralympics video is simply one of the best things I've ever seen.

In these worst of times we need to remember that there's still a lot of good going on in the world.

Regarding the "Christian American" survey....next we have to define Christian. What a mess.

Excellent collection in yesterday's Stuff. If I could pick up and move to New Zealand with that group, I would love to. Likewise, I have always wanted to live in a tree, either above ground, like the Swiss Family Robinsons or below, like the Lost Boys, Wendy and Peter Pan. A few years ago I think you posted a home that a woman in Oregon had converted from a forest ranger lookout tower that was breathtaking. I could live happily ever after in any of them.

The paralympics video was inspiring. Most of us fall into the trap of thinking small. The athletes, musicians, dancers and others in this film are amazing examples of what we can accomplish when we believe we can, and with the encouragement and help of those around us.

The "dead" cat is hilarious! and the Paralympics video is amazing.

One trait that most of the extremely talented and inspiring Paralympics video participants have in common is YOUTH. That doesn't make their amazing accomplishments any less awesome, but such feats are not likely at 80, IMHO, no matter how much effort we make or determination we may have.

I share Marilyn's view on the California redwoods. I, too, grew up in California and those magnificent trees seemed infinite; they were always there, then. . .

David Frum's article is extremely sobering--that's the best word I can come up with at the moment. Unfortunately, I don't think the present high level of civic outrage and resistance against The Orange Apparition will endure over the entire 4 years. People "move on" and there will be many more bright, shiny objects tossed at us. . .