Home About Archive Contact
Happy Valentine's Day and Update on the Retirement Fiduciary Rule
Elders, Stress and the U.S. Government


TIME GOES BY 2017 DONATION WEEK REMINDER
The second annual donations drive to help support the increasing costs of maintaining Time Goes By continues today. You can read the details on Monday's post.

Whether you donate or not, nothing will change. TGB online and the email subscription will always be advertising-free with never a membership fee or paid firewall. If you would like to help support the work that goes into this website, click the button below. If not, which is perfectly fine, scroll down for today's post.

MOSTLY ANECDOTAL: STORIES - BOOK AND CONTEST
New-ish readers of TGB might not know that for eight-and-a-half years, from 2007 to November 2015, there was a companion blog to Time Goes By called The Elder Storytelling Place.

I didn't write for “ESP”, other people did that and I published their stories. Many wonderful stories, more than 2100 of them over that time. You can still see the blog and all those stories anytime you want – there is a link in the right sidebar under the Features section. 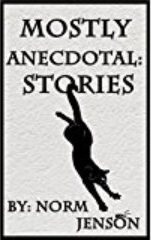 Now we have something really special - a book from one of the regular contributors to The Elder Storytelling Place titled Mostly Anecdotal: Stories from author Norm Jenson.

What Norm does in his stories is report his observations of everyday life, reporting the telling details you and I might not have appreciated even as we recognize the incidents he writes about from our own lives.

Norm notices the little things too many people miss – or dismiss – and turns them into charming, funny, insightful short stories.

And I do mean short. Short is his signature style and to show you, I'm going to print a story or two or three from Mostly Anecdotal. This one is titled “Spring.”

”I was sitting on a park bench, a gentle bit of gravity holding me in place, when I heard a robin singing, an American idol.

“He sang his song, hitting all the right notes, and while I saw other birds and heard other songs, it was his that nested in my heart.

“A start. A gentle breeze unaffected by my bit of gravity passed by, and the sun, perched upon my shoulder, shared its warmth.”

They may be short, Norm's stories, but they speak in that small way of our whole world. Here's one of my favorites titled “No Ugly Chicks.”

”He was a shoeshine guy. He was old and wore a baseball cap with 'No Ugly Chicks' embroidered on the front and from below the brim poked his bulbous nose, red and black veins crisscrossing ample sun-scorched terrain.

“His squinting eyes, like tiny black olives with pinpoints of gray, looked satisfied. No chin, no teeth, and Dumbo ears would make anyone wonder why.

“'No Ugly Chicks', I said, raising my eyes to his cap.

“He smiled his toothless grin and said, 'Nope.'”

Most of the funny stories are too long to quote and snippets don't work well with humor. But we can do one more that shows Norm's shockingly (wonderful) dark humor. Titled “Missed.”

”A rare warbler sits on a branch, noticed by no one. Nearby, wallowing in the dirt, is a bison.

“The arriving birders, chatting but not yet listening, may miss this particular warbler for he is far from home and unexpected. He's singing, 'sweeter, sweeter, sweetest,' but they don't hear him.

“They see a water thrush near the pond. They are attentive now, watching carefully and listening, but the warbler is no long singing.

“John sees the bison, weighing maybe more than a ton, and he sees the unknown warbler, weighing certainly less than an ounce. It is still on the branch, but his view is obscured. He needs to closer.

“Others warn him of the danger, but he sees only the bird.

“By the time John's body is removed, it is dark. The bird has departed, continuing its migration. Both will be missed.”

There are 72 stories in this collection, stories - which Norm defines, in the introduction, as a catchall word for creative non-fiction, flash fiction, prose poetry and memoir.

”I've tried to capture the interesting bits and pieces of life as I see it,” he continues. “I find it's all interesting, if you pay attention.”

In Norm's telling, it IS all interesting. Mostly Anecdotal: Stories is available at Amazon in both Kindle and soft cover editions. But have I got a deal for you: Norm has made three copies available to give away to TGB readers.

As in past giveaway contests, we will do a random drawing. Here's how it goes:

The contest will close tomorrow night, 16 February 2017, at midnight U.S. Pacific standard time. The three winners will be chosen in a random, electronic drawing and their names will be announced on this blog on Friday 17 February 2017.

Meanwhile, Norm can be found online at his blog, also called Mostly Anecdotal, on Twitter and on Facebook.

Norm's stories either blend or cross the boundary into poetry. I'd love to have one of his books.

I like short reads and would love to have Norm's book for our community library.

Congratulations to Norm on his book! The best things in life really do seem to be the little anecdotal ones. I would love to read more of his work.

Oh, yes. I loved the samples. Norm is my kind of writer.

After all what is life, but a collection of anecdotes! Would love to have his book. Dee:)

Sounds like Norm is a real interesting chap. I'm aware of surroundings but not good enough to write about them. Hey random thing that I never win anything from...stop on me please. :-)

I would love it as a companion to my recently acquired, "Exit Laughing" edited by Victoria Zackheim.

Oh, my gosh, Norm Jenson's stories printed in this blog entry are wonderful word pictures! Please enter me in the drawing.

I would love to have Norm's book--beautiful prose writing.

It appears that reading Norm's book would help me focus on the little things and appreciate them more. Count me in.

Yes, please. I could use a lift!

For my students. Norm's prose -poetry lifts my spirits and I know it will theirs. Thank you!

I would love one! I'm currently sitting on my back porch observing rain drops. Each sound is unique, like a snowflake.
Ah yes, the little things...

The sleeper stirs. I have only a few minutes left of "my" time. So, I'll enter this contest. Hope I'm using my time productively.

I'd love to have this for our community library and it would be great to read aloud from.

Choose me! I would LOVE to ha e Norm's books for inspiration.

Okay, I will wait until the result of this exciting drawing before ordering my book from Amazon.
Meanwhile, in the key of that warbler tuning up: (do re) me, me, me!

Put me down for the contest, Ronni. Thanks.

I sure would love that book.

I have read the comments, and to all, I say, "Yes!" Yes to his lyrical writing, yes to observing and recording the every day miracles, yes to owning an entire book. Yes, please!

Norm's stories are wonderful. I would love to have his book. Thank you for the introduction to his stories!!

I had forgotten about The Elder Storytelling Place! I think I posted some e pir essays there that I had been writing with my group! I love the samples you shared of Norm's book. Can't wait to read it all.

Oh my... Always read your post before hitting send. That should read MEMOIR essays, not e pir essays. I checked the archives and I have 4 pieces there. Fun to re-read them and the comments.

Aloha, I love reading a real book and it would be a special treat to read Norm's gem of a journal. Mahalo.

I regularly read a nature blog and love that it puts me in the moment with the writer. Norm's prose leaves the same impression. Would love to read more. Thanks for sharing his work.

This seems a great book to give a new perspective. I'd love more of Norm's observations.

It would be an inspiring present for my 70th birthday today 😀