Resisting Tyranny: It's Up to You and Me

No ageing stuff today. I think we need some time here to talk America's national predicament. The dangers to our liberties, our freedoms, our country and democracy itself grow day by day and if you are not frightened for our future - even near future - you are not, as they say, paying attention. So

”The Founding Fathers tried to protect us from the threat they knew, the tyranny that overcame ancient democracy.

“Today, our political order faces new threats, not unlike the totalitarianism of the twentieth century. We are no wiser than the Europeans who saw democracy yield to fascism, Nazism, or communism.

“Our one advantage is that we might learn from their experience.”

Following the defeat of the frightful healthcare bill last week (of which the president made clear he is as ignorant as he is about, for example, foreign policy, the reasons a government cannot be run like a business or the threats of climate change), Democrats seem to believe Trump has been soundly defeated and it is smooth sailing from now on.

In fact, a couple of days ago this headline appeared in the Washington Post: “Democrats, Once Threatened by Trump, See Little Reason to Worry.”

Oh, for god's sake, the Dems are going to blow it again. Have they not noticed that although the healthcare bill was pulled, much more continues:

• Paul Manafort. Steve Bannon. Steve Miller. Vladimir Putin. Does anything need to be said about their goals?

• Both houses of Congress just voted to repeal internet privacy rules. The president has said he will sign the bill and then broadband providers will begin selling any and all of the personal information they collect about our activities online (which is vast) to whomever they want.

• Don Jr. and Eric Trump announced that they regularly speak with their father, keeping him apprised of the doings of the family business. Does anyone really think this information does not affect the president's governing agenda or that he is not participating in decisions for the family business?

• Ivanka Trump has been given a White House office and security clearance. She is taking no salary but says she is abiding by the conflict of interest requirements of all federal employees. Uh-huh. Just like her father, I suppose. Also, no one understands what her job is or what possible expertise she might have about anything.

• Donald Trump and his bootlicker, Sean Spicer, continue every day to insist that up is down, left is right, day is night, black is white and - let me not pull any punches – lie without shame.

• And now, General Flynn has asked for immunity in exchange for testifying about Trump/Russia connections. This is monumental on the order of Watergate.

Even so, What a puny list I've made compared to the large number of stupid, ignorant, frightening and potentially illegal actions from the president and the Republicans who are in control of the entire Congress. Whether it is dirtier air now for everyone or continued attempts to defund such important institutions as Planned Parenthood or collusion with foreign states, it is impossible to keep up.

The Democrats are not going to protect the country, nor is Congress and the media isn't helping as they chase each day's new shiny object of no value. Many non-governmental organizations are working hard against the onslaught from Washington but they cannot do it without us – you and me.

Here is that interview. (I couldn't find a video copy that is not visually distorted so just go with it – listen to the words and ignore the video. Also ignore all of Maher's mishigas during the interview and especially in the last two minutes or so. As he tends to do, he just refuses to let interesting people be interesting but Snyder is more than worth your time.) 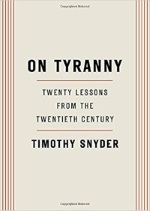 Professor Snyder's On Tyranny, published last month, explains how easily tyranny can come creeping in on silent feet and destroy democracy before we notice what has happened. He also shows us what to watch for and what we must do to fight back.

On Tyranny is an inexpensive, small-format book that is available at Amazon and most other online and offline retailers. Each chapter, only four or five pages long, is one of the 20 lessons we need to know.

Somehow in that small space, Snyder has packed in the history he calls on to make the connections between the past and today, and shows how we can use that knowledge to craft our responses.

You can easily read the book in an hour. Please do that. Then re-read it. And then re-read it a third time while you highlight or make notes on what you want to remember.

If enough of us do this and put Professor Snyder's lessons to use, it might save our democracy.

We must also be concerned that he has the ability to start a nuclear war if he chooses. And let's not forget he has hastened the day when our beautiful home becomes uninhabitable. No, this is not the time to lessen the Resistance.

You're right Ronni, about needing to try to ignore Maher's talking over and making jokes during the professor's more solemn and important comments, but it's not easy and it so annoys me. I realize that Maher has cultivated an audience and shtick over many years and controls his show around that, but he doesn't seem to be able to curb his tongue anymore than Trump can control his stupid tweets, and I'm not sure whether he ultimately hurts or helps the cause. At least he provides a venue for people who have something to say that I may not have heard otherwise. Thanks for sharing the information; I will definitely take a closer look into Snyder's book.

Your post today, Ronnie, plus the gloomy weather forecast is the perfect formula for a depressing weekend.
However, while our president will no doubt be basking in the warmth and sunshine of the Florida "Whitehouse" for the next couple of days, we can at least console ourselves with the fact that there are enough intelligent people around who are students of history that will not let us forget the past.
And this, perhaps, is where we seniors are at our best. Even if we can't remember what we had for breakfast, most of us can remember the past with amazing clarity and we should impart that first-hand-knowledge to as many young folks that will listen.

This is an important book for these times. I read a plethora of online articles and hard copy papers and mags every week, so I stay informed. But sometimes a book, written with background knowledge and in depth references, is just what we need to help us form an opinion and take action. (A play on words, since I intend to buy the book!) Thanks for this, Ronnie!

Amen. I second your emotions. We certainly can't let up the pressure that's now being applied to Trump--and, I hope, to the Republican right wing. We certainly can't depend on the Democratic party, which tends towards complacency and prefers to talk about the middle class, while ignoring the working class and the poor. And we must all stand against tyranny. Snyder is a good guide.

What an irritating man and a howling mass of an audience....what is that all about in the face of a serious professor giving important information. I just cannot watch this for the hooting, screaming and interruptions. I shall have to buy the book.

“Eternal vigilance is the price of liberty.”

*rump has taken so many actions right out of Hitler's play book that it's really terrifying that the people can't see it. First Hitler set up a straw man (Jews) to blame for all of the miseries of the middle class and when, through propaganda, he has the gullible loons convinced that the Jews were sub-human he launched violence toward them with crystal night. Then he castigated the press (who weakly objected) as corrupt and liars. Having neutralized any and all opposition he was able to lead the sheep into despicable acts and a war that ultimately destroyed countries and cost millions of innocent lives.

Lest we forget, just look what Trump has done and is doing. His straw man are the Muslims and I get disgusting propaganda emails from 2 conservative acquaintances (I no longer count them as friends) spreading hatred of all Muslims. Then when the media started to object to this (weakly) he called the news 'fake news' and said the media were the liars. And I predict another terrorist attack here (probably home grown) and then "our great leader" (a little sarcasm here) will use that as an excuse to start WWIII and the people will go along with his bragging that he will wipe out the Muslims and will support him, just as the deluded Germans followed Hitler.

There is more to his playbook. For example, putting his family in power in government to support all his insane actions. As they say, there is method to his madness. Be afraid, be very afraid. The evils have been let out of the box.

Apologies. I should have edited my comment before posting. A few more paragraphs might have made my message more readable and clearer.

"On Tyranny"......it's on the list now, along with Bernie Sander's "Our Revolution," though most of us should get the picture at this point. I'm concerned that so many intelligent people are talking, talking, talking about the *rump insanity, listening and watching and reading............and not DOING anything. This is a lot more then an intellectual head game, with a lot more to lose. We can't just watch and talk and hope.

No apologies required Darlene. Your message is clear as a bell. Plus you're more articulate on a bad day than most of us on a good day.

I want to see trump and his ilk taken out of the white house in handcuffs.

Thank you, Ronni, for this post and the video link. We all need to do more!

Completely clear, Darlene, and your responses reflect appropriate intensity to the current WH/Republican insanity, which gives new meaning to "shock and awe," (or "shock and awful"), to quote another elected buffoon.

It's irritating that elected public officials from other states or districts (Nunes in CA) won't take my calls, but happily will take my money.

I hope there are enough stable, sane people with influence that have a larger, overall picture of what to do from here on and possess the necessary bravery and courage to lead our own tearful trail.

Snyder is a fine historian. His book, Bloodlands (along with Tony Judt's Postwar) changed my (minuscule) understanding of central Europe. Thanks to your recommendation, I just bought On Tyranny.

We have to keep letting the Dems know we expect them to do everything in their power to impede GOPers and this crackpot in the White House.