If President Donald Trump follows through on his stated plans for this week leading up to his hundredth day in office, it will be a head-spinning time for those of us trying to keep up.

So let's take a look today at one of the nefarious ideas the Republicans are plotting for Social Security. We all know better now, don't we, than to trust anything Trump says on any given day. Just in case, here is a reminder of one promise from the campaign:

”This approach would give a worker earning $60,000 a year an additional $3,720 in take-home pay, a possible win that lawmakers could highlight back in their districts even though it would involve changing the funding mechanism for Social Security...”

Although the idea is short on details, it appears that the current Social Security funding via the payroll tax would be replaced with something like a VAT (value added tax) on imports that would be held in the general fund instead of in the Social Security trust fund.

Nancy Altman, the Social Security expert who works tirelessly to protect the program, calls the proposal a Trojan horse, as she explained at Huffington Post:

“[This proposal] appears to be a gift in the form of middle-class tax relief, but would, if enacted, lead to the destruction of working Americans' fundamental economic security...”

”Not only would the Trump proposal starve Social Security of dedicated revenue, it would ultimately destroy it. Social Security is not a government handout. It is wage insurance that the American people earn, as part of their compensation, and, indeed, pay for with deductions from their pay.

Let's back up a little. Here is a photo of President Franklin D. Roosevelt signing the Social Security bill into law on 14 Ausut 1935. 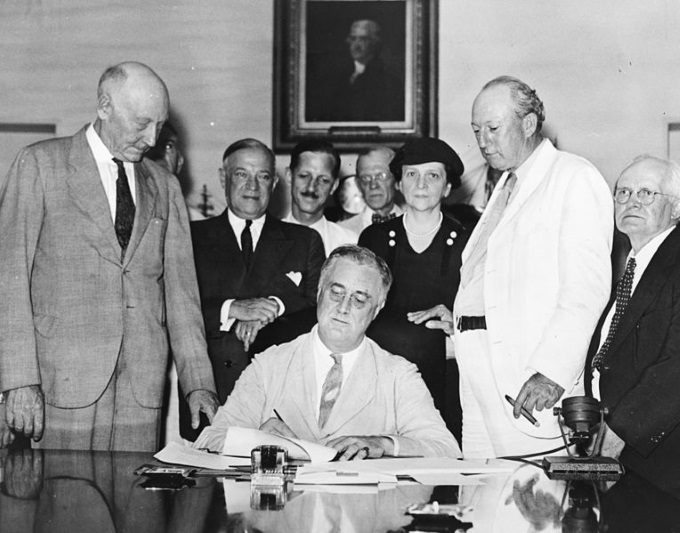 This is what he said during the signing ceremony:

And so it does. Without Social Security, 22 million people it currently insures would be living in poverty.

The dedicated Social Security Trust Fund did not exist when FDR signed the original legislation so in 1939, he signed additional legislation creating it, he said,

“…to give the contributors a legal, moral and political right to collect their pensions…With those taxes in there, no damn politician can ever scrap my social security program.”

I guess Mr. Roosevelt didn't count on the damn politicians of the Trump regime.

[For an easily understandable explanation of how the Social Security Trust Fund works, see my post from December 2004.]

When this subject came up at a meeting I attended last week where all attendees were elders who receive a Social Security benefit, one said that it doesn't matter if the idea succeeds because any changes to the program will not affect current recipients.

I hear that way too often but I'm pretty sure that like me, most of you are ready to fight to maintain this program for your children and grandchildren and beyond – fewer and fewer of whom make enough money these days to save for their retirement.

So keep your eye on all Republican budget proposals to see what they're doing with the Social Security trust fund. That way you'll know what you're talking about when the time comes to call your representative and senators in Washington about this.

Here's is a last word on the subject of scrapping the payroll tax (for today) from the estimable reporter, Michael Hiltzig of the Los Angeles Times:

”Already, conservatives and budget hawks repeat as a mantra that the cost of Social Security is 'unsustainable.' That’s their claim even though the program runs a surplus today and ensuring its fiscal stability for the future would require a modest increase in the tax rate or removal of the cap on taxable wages ($127,200 this year).

“Scrapping the payroll tax would make it easier for Congress to cut Social Security benefits under the guise of saving the government money. And that’s just another way to funnel more money to the rich, at the expense of the working class. And who needs that, other than people who already have enough?”

One after another, like a painful drumbeat, the proposals coming from this administration and its spineless cronies in Congress make me (and all of us who read TGB) sputter. Helplessly. Yes, we can, should and will contact our representatives as long as we're able, but it won't be enough. I wish I could be more hopeful, but I'm running out of steam. Alas.

I just hope there is enough opposition (on both sides of the aisle) to keep this proposal in debate until the 2018 elections when America will have come to its senses and thrown those rascals out.

Thank you ,Ronnie. Like you I have friends who often tell me not to worry about whatever the current plan to cut social security is because it will no affect "us". It's an appallingly selfish attitude.

Not for the first time I wonder WHY politicians with the opposite view on this (and on other programs) DO NOT bring these shenanigans out into public view. All we ever seem to hear is the view from the right. I do not watch or listen to a lot of TV, so perhaps there are opposing views on the Sunday morning talk shows for instance. But I never seem to see opposing views in print, it may be I don't know where to look.

I so appreciate your never failing to inform your readers of the latest on these very important issues.

Congressmen have been saying Social Security is unsustainable for years. So why didn't they do anything about it then?

The last information I had is that if we do nothing Social Security will continue to pay out it's full obligation for 20-24 years. And a simple tweak by removing the cap on wages so that more people would be contributing would solve any shortage that might occur in the future.

When the Republicans borrowed (stole) the Social Security trust fund and placed the funds in the general fund it was the first step in doing away with S. S. entirely; a program they have always hated. Now they see a chance to go to step two.

If we don't raise a big stink it will work and by the time your children and grandchildren are eligible there will be no Social Security, Medicare or Medicaide for them. And with the power they have now owning the 3 branches of government they may move faster and perhaps your check will dwindle and possibly disappear.

Don't be complacent. All of our civil liberties are on the chopping block. Fight back as if your lives depend on it - maybe they do.

Think carefully about what really is at stake here. This government holds the working class in very low esteem. Without a social safety net, and the consequent impoverishment of millions, society will descend into chaos and anarchy—as history has shown. It is unthinkable that in this era, when humanity should be moving forward, we are in fact going backwards!

"Impeachment"--I keep thinking that if ever a president needed to be impeached, this one does. I hope that more skullduggery comes to light on the Russian connection and that people will become increasingly disenchanted with the myriad conflicts of interest, violations of the "emoluments" provision and open nepotism/favoritism.

We'll probably never shake the Orange Apparition's "true" base, but at best it's 40% of the adult population (if polls are to be believed at all). There are still more of us than there are of them. We just have to try to be patient, resist, rebuild behind the scenes and tighten the trap. I agree with the Lucky Few about what may happen if this evil regime prevails. Unfortunately, I'm too old to be very useful in the full scale revolution that would likely follow.

I've never understood why everyone doesn't pay the S.S. tax, why is there a cap on earnings. I don't think either party can get away with changing S.S.
Yes many people would be destitute without it, but it was never meant to fund your whole retirement, you would were supposed to do something towards it too.
Hate the idea of a VAT for anything.

Personally I don't need the government to take care of me. Had they left the huge amount of social security tax in my pocket I'd have additional investments far greater than the $49k per year my wife and I will receive at 66. I believe a large part of the current retirement crisis is due to people being brainwashed by politicians into thinking the government has their backs. Red or blue, conservative or liberal the government primarily wants your money and has no compelling interest in taking care of you.

And why do so many keep on thinking that Social Security is a hand out, when we all paid in for all our working lives? In the current kleptocracy, the middle and lower classes need to join together to get their rights, stop relying on rich men who for some sick reason, want to get richer.

No, Steve, you wouldn't. Or at least... maybe you personally would have had the discipline to set aside that money out of every single paycheck, and maybe you personally would have won the private-investment gamble. For most people, emergencies arise. Priorities shift. There are times in their lives when they feel they can't save because there's an urgent need for the money right now.

Social security means that they are still setting aside some money throughout their working lives, and it's invested in what should be the safest investment in the entire world: United States Treasury Bonds.

What the Republicans propose is theft.

Thanks so much for one of your most cogent and important blogs I've seen on this topic. I'm shocked at the elder who said, in a public meeting essentially, I've got mine.