HOW SMALL WE ARE IN THE SCALE OF THE UNIVERSE

Of course, you have intuited how small we are on the scale of the universe. But this TED Talk brings it home is a big – uh, make that small way.

For cheese farmers, there's a bank in Italy that will literally accept cheese as collateral for loans. Take a look:

BECAUSE EVERYONE KNOWS WE DON'T HAVE ENOUGH SPORTS

A few weeks ago, the Washington Post reported that Museum of Natural History of The University of Louisiana at Monroe must move its collection to make room for an expanded sports track:

”The curators were given 48 hours to find a new place on campus to store the collection — something they weren't able to do. Now they must get another institution to take their several million specimens.

“Their hard deadline is July, when the track renovations are slated to begin. And if the collection isn't moved by then, curators said, it will be destroyed.”

”...includes some 6 million fish collected by ULM ichthyologist Neil Douglas, one of the leading experts on the fish of Louisiana, as well as half a million native plants. It is an important record of biodiversity in northern Louisiana — a region that stands to see significant environmental impacts as a result of climate change.”

What can possibly justify this move by the university.

THE TRUMP KLEPTOCRACY ROLLS ON

On 6 April 2017, Ivanka Trump was sitting next to the Chinese President Xi Jinping and his wife at a formal state dinner at Mar-a-Lago. That was the dinner, as you no doubt know, where chocolate cake was served as President Trump told the Xi that the U.S. had just fired a bunch of missiles at Syria.

Or was it Iran? Trump wasn't certain which country had been targeted when he discussed it on a TV news program later. The interviewer had to correct the president.

You probably also know that on the same day, as the AP reported,

“The scenario underscores,” reported the AP, “how difficult it is for the president's daughter, to separate business from politics in her new position at the White House.”

Difficult? Or just deliberately flouting the law, custom, the Constitution and countless conflicts of interest? The Trump family kleptocracy rolls on.

OOHO – WATER YOU CAN EAT AND MUCH MORE

Ooho is the name of an edible substance that can eliminate plastic pollution. The website says The aim of Ooho is to provide the convenience of plastic bottles while limiting the environmental impact. Take a look:

Although being used in some small venues, the inventors are still developing the container:

”Their goal isn’t to add another brand of water to an already crowded market but instead to offer a new packaging technology. They envision a range of products so, for example, there would be one version with a very thin membrane suitable to hand out to runners in a race,” explained The Independent.

“For the retail market, there would be another with a thicker outer layer that you could peel off and discard, making it more durable and hygienic.”

Read more about this hopeful possibility at the website and at The Independent. It might help save the Earth.

Don't go thinking tomorrow's election in France doesn't affect you or the United States or the future of the world because it does.

In fact, the election has shaped up to look almost eerily like the U.S. election last November – the same kind of candidates opposing one another.

On his HBO program, Last Week Tonight, John Oliver shows us the similarities and what is at stake as only he can. The end is brilliant but can't be appreciated if you fast forward – you need to see the entire lead-in.

DID YOU KNOW PIZZA IS A SPORT?

Neither did I. Take a look at the World Pizza Games. Go ahead – it will make you laugh.

Here is what they tell us about this at Bored Panda:

”Where one person sees a dirty car, the other one sees a blank canvas. And if you live in Moscow, your car can also become the ‘target,’ doesn’t matter if you want it or not!

“It’s thanks to the Russian illustrator Nikita Golubev, who brings out the full artistic potential of dirty cars by turning them into amazing pieces of art.”

Here are a couple of examples: 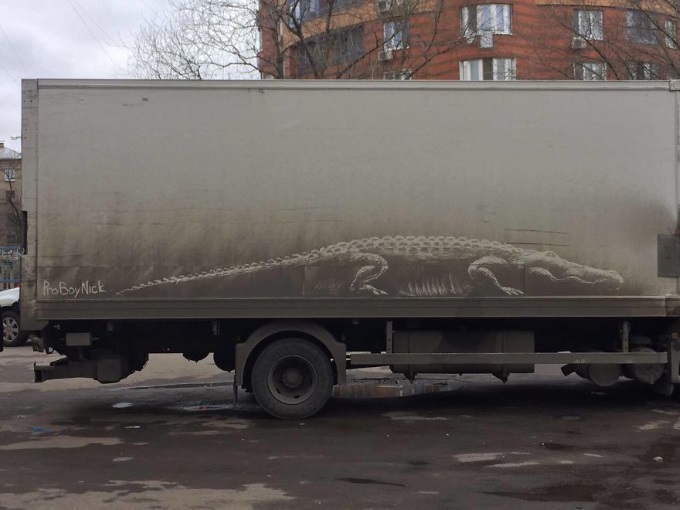 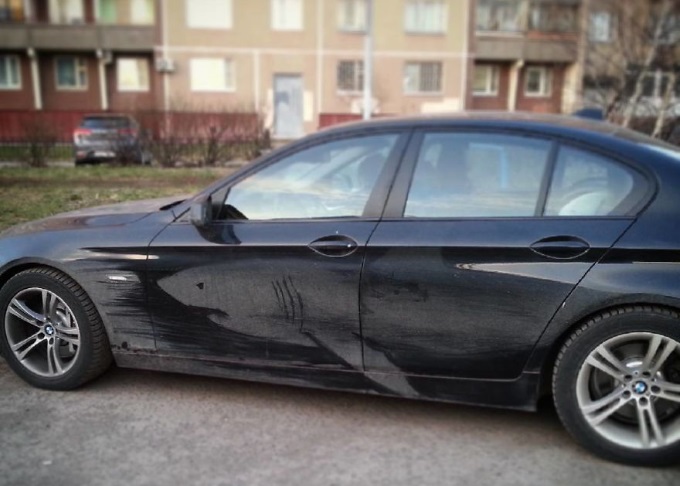 You can see more at Bored Panda and even more at the artists' Facebook page.

Ice cream shop owners Scott and Pam Martin have adopted a squirrel named Putter as a mascot who seems to love vanilla ice cream enough to show up nearly every day for her scoop. They even make squirrel-size cones for her.

Today is a reminder to enjoy, love and protect our precious earth, which we're "renting" for the time we're here.

A long time ago, a friend was frustrated with my i thinking I was special (really, I was spoiled). He told me to imagine going into the galaxy and looking back onto the earth, and realizing I was but a speck among many.

At the same time, it was immediately apparent that "I" was solely responsible to love, care for, plan, and deal with my life, as was everyone else. It was a startling, freeing moment, to be only a speck, but the biggest speck, for me.

These artists who use their talents to adorn spaces are a delightful addition to the eyes.

Putter is adorable. I'd be there every day if I lived in the area.

The Russian artist is amazing!

And yes, on Earth Day, it is appropriate to remember that we are but specks of dust in the universe - living on the only planet that can support us. If we don't take care of it, we'll die out as a species and never be missed.

John Oliver is a National Treasure given to us from across the pond.

Putter is a cute little gal and fun to watch her enjoy her little ice cream cone.

Now I think I will go out and draw a picture on my daughter's car. ;-)

The first video mentioned "our relatively small sun". This is wrong. The sun is a G type star (specifically a G2, or more specifically a G2V) which means it's bigger than about 95 percent of all stars.

Once again you have educated, enlightened, and entertained me with your post. Thanks.

I had a good laugh watching John Oliver on your blog, it was good as today I feel very anxious about the results of our elections, from Chantal in Paris. Once again I congratulate you for your blog