Home About Archive Contact
Are Old People (and Everyone Else) Sleeping All Wrong?
ELDER MUSIC: Dogs

AGEING TO THE BEAT OF THEIR OWN DRUM

”An extraordinarily simple premise deftly executed, this video arranges a diverse group of 100 people in ascending order from age one to 100. With a snare drum to mark the progression, the resulting short film, People in Order: Age, is imbued with humour and humanity.

“In the words of the filmmakers, the project is ‘like a list of government statistics where the citizens […] have broken out from behind the figures on the page. The people on the screen stop us from seeing them as numbers. Even in single-second bursts there are worlds of personality stretching out in front of us.’”

Thank reader Tom Delmore for this. More information on the Vimeo page.

It was just one page with no explanations (see it here). This is how AP broke down some details: 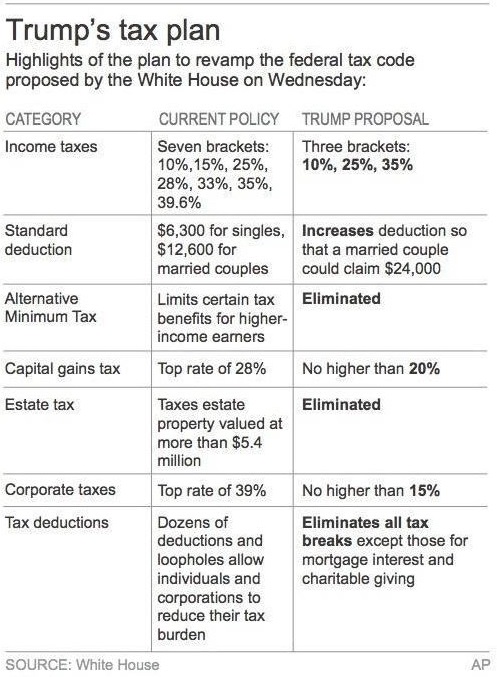 Nobody knows what the “plan” means except one obvious point - that billions in taxpayer money will flow to rich people like President Trump. On Friday, Paul Krugman had this to say in his New York Times column:

”So why would the White House release such an embarrassing document? Why would the Treasury Department go along with this clown show?

“Unfortunately, we know the answer. Every report from inside the White House conveys the impression that Trump is like a temperamental child, bored by details and easily frustrated when things don’t go his way; being an effective staffer seems to involve finding ways to make him feel good and take his mind off news that he feels makes him look bad.”

If you're keeping score, here is some more of the opposition commentary: Axios. Reich.

Australian Matt Parker is a math obsessive and comedian and in this video he goes to extremes to measure such places as Times Square, Washington Square, etc. to see if they are as actually square as publized by their names.

Parker is funny and so is his obsession. This may be a bit too New York-centric for many readers but I had a good laugh and if you do, thank Peter Tibbles (another Aussie) who is in charge of TGB's music Sundays for sending it.

NEW MEDICARE CARDS DUE IN 2018

As anyone old enough to have a Medicare card in the U.S. knows, our Social Security number is right there in the middle of the card, not something that does a lot to curb identity theft.

Finally, in 2018, the Centers for Medicare and Medicaid Services (CMS) will be issuing new cards with different kinds of numbers:

”The new cards will begin being shipped out in April 2018, [and will reach] approximately 60 million beneficiaries by April 2019.”

Security experts have been warning us for years not to carry our Medicare cards in our wallets which can be an inconvenience. It will not be too long now before that warning is unnecessary. You can read more here.

Today is Willie Nelson's 84th birthday and it must be to celebrate that event, don't you think, that he has released an album titled “God's Problem Child” this week. And look at this, there are three fantastic songs that are all about growing old.

Here is one called It Gets Easier. (If the video does not play, you can listen to the entire album at NPR.)

Thirty-odd years ago, I produced an interview with Willie Nelson for The Barbara Walters Specials at his then-home in the Hill Country near Austin, Texas. I had many weeks to do the research and what I discovered - that others who followed Willie's work confirmed - is that if you could string together all the songs he has written in their proper order (that's the hard part) you would have a close chronology of his life. No need to write a biography; just listen to lyrics and know what he has been going through at those times.

So it makes sense, at age 84, that he is writing and singing about growing old. Here is another track, called Still Not Dead. (As above, if the video doesn't play, you can listen to the entire album at NPR.)

I was alerted to this new Willie album a couple days ago by my good internet friend, Erin Read, who is director of strategic planning at Creating Results where she spends her days advising corporations how to not insult old people they market to.

The third song about being old is called, Old Timer and Willie is as wonderful as he has always been on the rest of the 13 songs too.

There is a track-by-track guide to the album at Rolling Stone.

At a time when the new administration in Washington, D.C. is rolling back environmental protection regulations, this is a bittersweet milestone: On 21 April, Great Britain recorded its first ever coal-free day of energy production.

”The UK has had shorter coal-free periods in 2016, as gas and renewables such as wind and solar play an increasing role in the power mix,” reported The Guardian. "The longest continuous period until now had been 19 hours – first achieved on a weekend last May, and matched on Thursday.

“A National Grid spokesman said the record low was a sign of things to come, with coal-free days becoming increasingly common as the polluting fuel is phased out.” 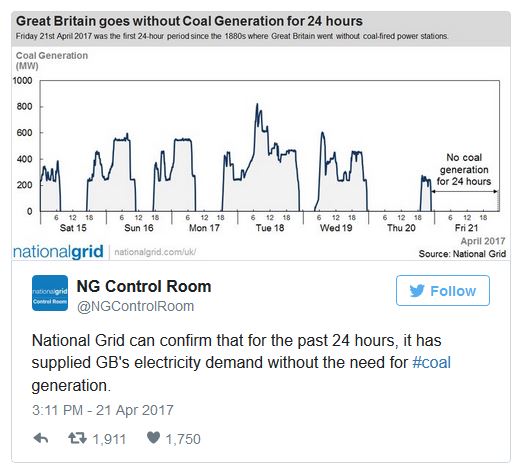 This short video offers three explanations (guesses is more realistic) for the trees with unnaturally crooked trunks in a Polish forest. Pay special attention to the third possibility for a small giggle today:

Read more at The Times.

A CROW BEFRIENDS A KITTEN

This is a really old video that I recall watching years ago. According to Youtube it was shot in 1999 and posted to their pages in 2007. Whatever its provenance, it's fascinating look at cross-species friendship. I loved seeing it again and thank reader Nana for that.

I would prefer the use of the word "Piazza" instead of square. But then again, in NYC, it might be confused with "Pizza."
Of course, one could call it a "Place" (Washington Place, Madison Place).

I wonder if anyone has checked with the couple now about the pair?

Ronnie, thank you for redeeming Willie Nelson for me! Always loved his music but a few years ago, we attended an outdoor Willie Nelson concert in a small town in AZ that was a huge disappointment to us: bus over an hour late, then still just sat there with no Willie, then a half-hearted, "talking more than singing" performance, very disappointing. But I will buy the album and we will enjoy it! Better in the studio, I guess!

Thank you, Ronni, and, thank you, Tom Delmore, for the video 1-100. I thoroughly enjoyed it, though it did seem as if a large proportion of the participants in the age group 80-100 were residents of the same home. Great final comment: "Is that it?"!

The Willie Nelson clips were, as often, very enjoyable. Especially "Still not dead again today". Reminiscent of "The reports of my death ... ".

I, too, wondered about the crow and the cat today. Google helped out as usual ... check out a link to the Sun Chronicle's Kitty Corner from 2008 and mnn.com's piece in 2011 about a book written about Moses and Cassie.

I enjoyed Willie's Still Not Dead Again song. His voice is amazingly strong and his arms appear to be as well. I suspect that pot may have something to do with the Fountain of Youth. I wonder if we will ever hear him sing about his eventual surprise at waking up dead.

The cat and crow were delightful and reminded me of the video of the owl and the black cat which actually followed this video on Youtube. Amazing story that leaves me wondering how many of these inter species relationships go one but are never known.

The trees are baffling. Another mystery similar to the 1908 Tunguska event, when an explosion of a still unknown source leveled trees over 100s of miles, but caused no human deaths. Very strange.