Cheating Death is an Ancient Dream

To get there, go to this URL, click on the word, “express” at the far right of the page. At the next page, you can fill in the form and let them know that you support net neutrality and Title 2.

Again, here is the procedure – Oliver has made it so much easier than the FCC does:


It will take you only a few minutes to do this and if enough people do, we can save net neutrality – like last time, three years ago. (If you need a refresher about this issue, click here and scroll down about halfway.)

A month ago, I told you about the quest of a bunch of billionaire tech executives who are spending large chunks of their personal wealth on longevity research convinced they can conquer death in their lifetimes and live forever.

Founders of Facebook, eBay, Napster and Netscape among others, reported the Washington Post, are driven by a certainty that rebuilding, regenerating and reprogramming patients’ organs, limbs, cells and DNA will enable people to live longer and better.

Oracle founder Larry Ellison says, “Death has never made any sense to me.” Google has backed a project called Calico with the ambition of “curing death.”

As I mentioned in that March post, the creepiest research so far is what I couldn't help but label “the vampire project” in which scientists say that old mice show remarkable rejuvenation when transfused with the blood of young mice. And the research hasn't stopped with rodents.

At a private clinic called Ambrosia in Monterey, California, people can pay $8,000 to have blood plasma from teenagers and young adults pumped into their veins.

Many of us were taught in school that 16th century Spanish explorer Ponce de Leon made it his mission in Florida to find the fountain of youth. That's probably a myth but tales of such magical waters have been told since at least the 5th century BCE. 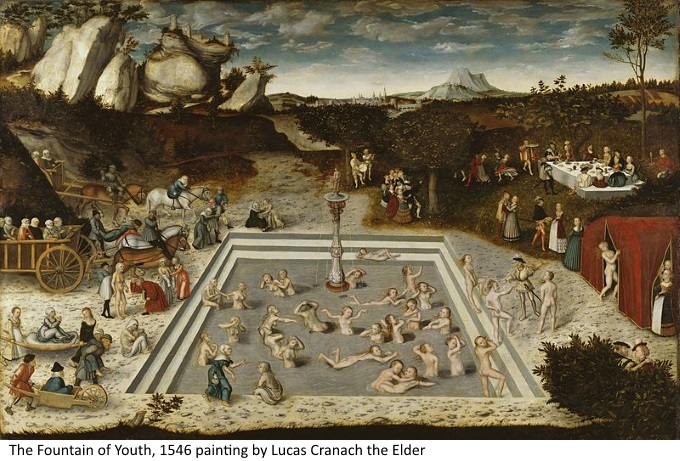 I was reminded of this ancient pursuit of mankind a few days ago in a newsletter I receive from H.R. Moody, editor of the Teaching Gerontology at the Association for Gerontology in Higher Education.

Moody linked to a wonderful story about the extreme ways humanity has tried to cheat death throughout history. Amazingly, blood transfers from young to old are far from being a new idea. Here is a sampling:

6TH CENTURY BCE
Those who want to live a longer life are advised to consume a mix of root powder, gold, honey and butter after a morning bath according to the Sushruta Samhita, an ancient Sanskrit medical text.

1ST CENTURY CE
Pliny the Elder reports of Romans with epilepsy rushing to drink blood of gladiators to cure their ailment and gain strength and vigor. (Pliny did not think this was a good idea.)

4TH CENTURY CE
The alchemist Ge Hong describes a medicine made from the brains of a certain kind of monkey that, mixed with herbs, would lengthen life up to 500 years.

1489
Philosopher Marsilio Ficini suggests the elderly drink the blood of young men to rejuvenate themselves. A few years later, Pope Innocent VIII tried it. He died shortly after.

1920
Eugene Steinach experiments with a popular procedure that involves a partial vasectomy. Among his patients were W.B. Yeats and Sigmund Freud. The latter hoped it might slow his jaw cancer. It didn't.

And if you believe that...

These are just a few of the various historical attempts to avoid the grim reaper that you'll find listed at the Time magazine story.

I wonder if the tech billionaires will eventually join the likes of Ge Hong, Marsilio Ficini, Jean-Baptiste Denis, etc. as amusing sidebars in misbegotten pipe dreams or become more famous for their longevity success than for their technology companies. 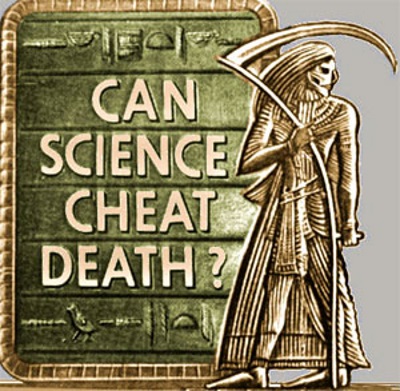 Well, if money can buy happiness, why can't it buy everlasting life? And therein lies the dilemma, since living forever will surely guarantee that people will be unhappy, just as they are now.

I've actually heard that money cannot buy happiness, but it can pay for the reduction of much discomfort and/or unhappiness. But I digress.

My observations in the corporate world have been that organizations make it increasingly attractive to older employees to leave early OR they make life too uncomfortable to stay. This leads to a little talked-about rising GAP between actual, real-life retirement age and the availability of retirement benefits (such as Medicare). I see several reasons for that gap to widen in coming years.

Death never made any sense to Larry Ellison? Has he considered where we'd be now if no one in earth's history had ever died? I'd be happy if he'd just eliminate disease and pain in our normal life spans. I've no desire to live forever (and besides, I couldn't afford it!)

This is just great. Imagine the world crammed with the 1% turned 99%. I believe I'll just continue my trek toward death's door.

Is anybody else having difficulty in filing a comment on the FCC site?
There is no submit button and my email address if flagged as not legitimate.
This is not easy.UGH!

Sorry, Ann. It worked for me a whole lot of others had no trouble so far. The good news is that maybe so many people are using it that it broke again.

I wish I could help but it's not my website and all I can do is point the way.

Eternal life is the one thing that money can't buy, but by god they're going to try. Death is also the great equalizer and those shallow billionaires will be no better than the poorest exploited laborer. It must drive them crazy.

If they were to succeed and everyone had eternal live how long would it be before the earth ran out of resources to feed the hordes? Wars would be fought over a crust of bread. "The Handmaidens Tale" would just be a small preview of the controls enacted.

FCC prostest filed.......yup, we make a difference, right from the living room sofa.

Oh, Larry, Larry, LARRY! What fools we MORTALS be!

Aldous Huxley wrote a great novel on this topic, *After Many a Summer Dies the Swan. *

Yeah, I think the FCC website is broken again! I tried to file a comment but no luck. That doesn't mean I won't do it, though.

Living forever holds no appeal for me, but I'd sure cast my vote for reducing or eliminating pain, debilitation and illness. How great to be healthy and functional until some day we just keel over--at the same time our bank balance zeroes out. That'd work for me!

Japanese writer and folk story gatherer Yei Theodora Ozaki has a tale about a fellow who doesn't want to die and is whisked away to an island where everybody lives forever. The entire populace spends all their time trying to commit suicide. They take poison, jump off cliffs, stab themselves - to no avail. The reason: they're bored (but, sadly, not to death).

I recently wrote a tongue-in-cheek short story inspired by this Japanese tale. There's a link to it under my name.

All this money and medical research isn't all silly. Some believe it will lead to drugs so we'll be healthy (not in pain or debilitated) until finally going kaput.

I love it. You've outdone yourself with this one, Ronni. I would say we've advance since the first century. Gladiators are an endangered species today, so I would recommend alligator blood as an elixir to the tech billionaires.

Of course they have their underground bonkers,...er bunkers and their retreats in NZ where I'm sure they've found the fountain of youth - at last. Problem is, they don't want to share with the rest of us. It might get lonely for them talking to themselves.

My response to hearing that those tech billionaires want to live forever (and that they have underground compounds for surviving apocalypse complete with state-of-the-art gyms and entertainment centers) is "Who do they think they are??"

Ronni, as e-mailed, sending you much love and (I hope) a little useful information.