Home About Archive Contact
A TGB Extra: John Oliver on Is This Real Life?
Cheating Death is an Ancient Dream

Cruel Cuts in the Trump Budget 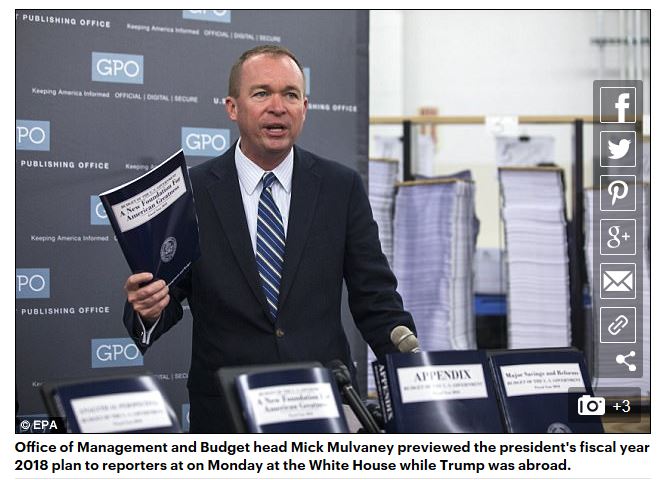 The main beneficiaries of President Donald Trump's 2018 budget proposal are the people who already have too much, the one percent. Here's how tax cuts go for them, as reported in Yahoo! News:

”According to calculations from the Center for Budget and Policy Priorities [CBPP], each household in the top 1% would receive approximately $250,000 per year, and the 400 taxpayers with the highest incomes would each receive at least $15 million per year, for a total of 'at least $6 billion annually.'

“As the CBPP points out, '$6 billion is more than the federal government spends on grants for major job training programs to assist people struggling in today’s economy,' and it is 'roughly the cost of providing 600,000 low-income families with housing vouchers.'”

Other winners in the budget proposal would be the military at a 10 percent increase and the border wall with $1.6 billion set aside to begin its construction.

After that, it is a reverse Robin Hood budget. All of the above is being paid for with deep cuts to programs for children, the poor, disabled, elders and important agencies of the federal government that benefit everyone.

So many programs and agencies are under the knife in the proposed budget that I'll concentrate on the ones that mostly affect old people by which I do not mean to slight the pain others would suffer. No one but the very rich would escape hardship if Congress passes this budget.

First, here is a chart from the White House showing some of the "winners and losers" in Trump's first budget. Most of the ones we'll discuss fall under the Department of Health and Human Services. (Don't faint at the percentage reduction of the Environmental Protection Agency.) 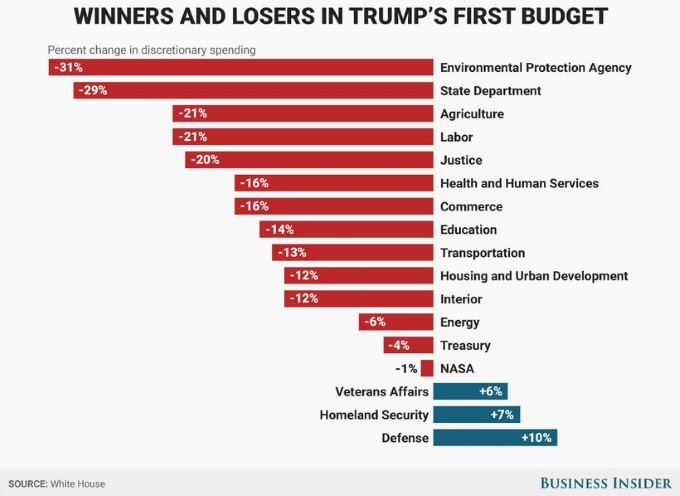 MEDICAID
$800 billion would be gone from the program that gives millions of elders access to long-term care. That amount is on top of the $839 billion that would already be cut under the proposed American Health Care Act (AHCA) that passed in the House earlier this month.

Few people recall that during the campaign, candidate Trump promised to not touch Social Security, Medicare and MEDICAID. (More on this below.)

MEALS ON WHEELS
Eliminates the Community Services Block Grant that helps pay for delivery of meals to low-income and house-bound elders.

LIHEAP
Eliminates the Low Income Home Energy Assistance Program (LIHEAP) that helps elders with winter heating costs. I lived in Maine for four years, one of the poorest and coldest states in the U.S. This program is crucial to keeping old people there warm (and maybe) alive in winter.

SOCIAL SECURITY DISABILITY (SSDI)
Administration spokespersons and too many journalists are saying that the budget keeps Trump's campaign promise not to touch Social Security.

Back in March when he was discussing a preview of the 2018 budget on Face the Nation on NBC-TV, White House Budget Director Mike Mulvaney had this to say:

Well, I do and so do millions of SSDI beneficiaries and their families. Nevertheless, in keeping with Mulvaney's misbegotten snark, the new budget makes deep cuts to the program that covers people mostly 50 and older who can no longer work, until they are old enough for retirement Social Security.

SSDI benefits are typically modest. In March 2017, the average monthly benefit for a disabled worker was $1,171.52, barely $14,000 a year. If this cut is approved, it would be the first inroad to cutting Social Security retirement benefits in the future.

Experts, pundits and some others who are supposed to know such things are saying that this budget is dead on arrival in Congress and I certainly hope they are right.

But I keep thinking, these are the same people who told us Trump would lose the election and they are kin to Trump himself who said a hundred times during the campaign that he would not touch Social Security, Medicare and Medicaid.

It's time to make some telephone calls again. The offices of congresspeople and senators keep count and the number of calls they receive DOES matter. So contact your representatives even if you believe they would vote to reject this Draconian budget that would further enrich the wealthy at the expense of the poor and middle class.

Our less than illustrious president has said he misses his old life. Perhaps he is doing his best to ensure that he is not re-elected.

I will never understand those in our country who feel we need to protect those that already have way too much money and for those who have too much a need to have more.

That mindset is such distorted thinking because it lacks a value system that says to those which much is given, much will be expected.

Where is their loyalty and patriotism to the very country that allowed them to reach that level of wealth.

It's going to take a lot of effort and diligence by a lot of people to reverse the proposals the president has proposed. Those who are comfortable and don't see themselves as being harmed by the funding cuts, and who may choose to sit on their hands and do nothing about them, need to pay attention to history. When a country's well-being is undermined, everyone is vulnerable. Those who live in ivory towers and breathe rarefied air may think they'll be just fine, but history often shows otherwise. I'm still hoping that cooler, more reasonable heads will prevail, but that's probably not going to happen without a lot of effort by many of those of us outside the 1% Club.

“Caring for others is an expression of what it means to be fully human.”
— Hillary Clinton

This president and his band of deplorables are heartless, self-serving individuals. We must continue to stand up, write letters, make phone calls and RESIST.

The problem with this strange budget proposal is that it is so obviously severe that it will get changed. But by how much? Or in other words, any relief from this initial proposal will seem to be an improvement...even as, on balance, we are very likely to lose ground.

The Republican health insurance bill pretty much shows their mindset with regard to social programs. Specifically the comments that "I should not have to pay higher premiums to cover people who do not take care of themselves" (aka "taking personal responsibility" for themselves). They should pay more they don't deserve my help.

Understand this budget in the same vein. Republicans see the upper income people (aka "the wealthy") as successful who should be rewarded by being able to keep as much of their wealth as possible. The lower income folks who are not (as) successful (because it is all their fault) are not deserving of assistance.

This plan fits perfect in that mindset by cutting social programs - along with higher spending on "security" which somewhat translates into even more income for the wealthy who operate these security (war material suppliers) companies. (please note that bringing back "manufacturing jobs" that are paid for with tax $$ is not anywhere the same as bringing back private manufacturing jobs as promised - but workers won't care).

Considering the number of comments on SS that run more or less like "if the government would just give me the SS money I would have more income for my retirement " I consider many people do not understand that SS is not THEIR retirement fund. It is a pool of money to be used to provide a level of income security in retirement or if disabled.

It was amazing to me how many people about 50+ that were in a retirement planning class I took about the time I retired (so I could do a better job of working with my broker) that were saying "oh yeah I guess we better get started thinking about this stuff". They were more or less shocked to find out how much SS was really going to provide them. - not as much as they thought.

I don't think very many people under 50 even thinks about SS or retirement planning much at all.

And if HHH doesn't float your boat, how about this...
"A society will be judged on the basis of how it treats its weakest members"
~Pope John Paul II

I could not have said it better

My representatives and senators are deep-blue Democrats and will fight this abomination of a "budget" tooth and nail. Even so, I will send yet another message encouraging them to keep up the pressure on the Repugs.

The basic problem with The Orange Apparition and his sycophants is G-R-E-E-D! They do not recognize that there's such a thing as "enough". The concept of sharing and the Golden Rule are utterly lost on them--yes, even those who profess their "Christianity" most loudly. HRC was SO right! They and their followers are a basket of deplorables indeed!

Trumplestilskin and his real estate cronies ruined NYC for the poor and middle class to the point that I, and many of my contemporaries, can no longer afford to live there.
Now, it appears, they want to do the same thing to the rest of the country leaving America to become a playground for the rich until, mercifully, the polluted environment takes them all.

We can turn this around, we just gotta keep on keepin' on. And a friend said a good thing to me as I was bemoaning the difficulty of spending a nickel that doesn't go into the pockets of the 1%. "Put you money, as much as possible into the hands of a real person who is local." Where I live, for many things, that is thankfully possible.