Jonathan Chait in New York magazine tried to explain the reasons many Republicans believe women should pay more for healthcare than men:

”Women have, on average, higher lifetime medical costs than men, which means a market-based insurance system, where every individual plan is priced based on that person’s expected medical costs, will charge women on average higher premiums.

“Republicans have been dancing around this implication for years with their argument that people who don’t need prenatal care should not have to buy insurance that covers it.”

And, of course we all know men having nothing to do with the reason women need prenatal care. Right?

THE MOST EXPENSIVE SPICE IN THE WORLD

You can probably guess which spice it is but even if you can, the video is still enlightening.

OWLS AND THE NAPA VALLEY VINEYARDS

According to the YouTube page, one of the best-kept secrets of Napa Valley wineries is that they rely on barn owls rather than chemicals and pesticides to keep rodents at bay.

”Wildlife biologist Carrie Wendt has spent years learning how these majestic nocturnal creatures can have productive, working relationships with winemakers. So the next time you take a sip of that California pinot, take a moment to thank our feathered friends who helped make that glass possible.”

I realize that the firing of James Comey has buried news of the Republican healthcare bill this week but that hadn't happened yet last Saturday – it was still hot news then.

MSNBC weekend host, Joy Reid, reported that she and her staff contacted all 217 Republicans who voted in favor of the execrable American Health Care Act (AHCA), asking each one to appear on her program. Not a single one said yes.

Could it be, maybe, shame?

SHOULD WE REQUIRE INTELLIGENCE TESTS FOR CONGRESSIONAL CANDIDATES?

Moving right along on the subject of Congress, on 5 May, Republican Representative Raul Labrador of Idaho had this to say at a town hall meeting with constituents:

If you missed that or can't play the video, Representative Labrador said, "Nobody dies because they don't have access to healthcare."

Who ARE these people who supposedly represent American citizens?

Actor Melissa McCarthy began her impossibly wonderful impersonation of White House Press Secretary Sean Spicer on Saturday Night Live in February. Tonight, she is hosting that show and here is how the producers are promoting her appearance.

Don't skip this. It is funny, wonderful (and short):

SOCIETY AT ITS BEST AND WEIRDO PARFAIT

For the past week there has been severe flooding throughout Canada. Although I expect Canadians everywhere are good Samaritans, this story from reporter Tyler Dawson gives new faith in humanity:

”There were no soldiers filling sandbags or heaving them into trucks on rue Saint-Louis on Monday morning. Just regular people, of all sorts and of all ages, shoveling from two big piles of sand into green bags and hefting them into the backs of pickup trucks.

“Civil society at its best.

“Before I’d even got my boots on, someone drove by, asking if this was the spot to help out. A steady stream of people, some lugging shovels, made their way to loading area to help. An efficient passing line had sprung up to lift the bags into the trucks, a sort of organized chaos that seemed absent any particular leader or organizer.

“Somehow, everyone seemed to know where to go.”

You can read the rest of the story at the Montreal Gazette and view the video there.

Thank doctafil of Montreal for sending this item. You probably recognize her moniker, as she has been a frequent contributor in the comments at this blog for many years. 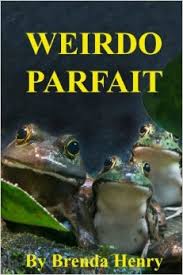 But today I have the pleasure of revealing her real name – Brenda Henry – as she has just published her third book of short stories which is titled Weirdo Parfait.

Almost all of Brenda's short stories are based on incidents in her life in Montreal and her frequent travels to Florida and other points of the world. She has a wonderful way with words - when she writes about how much her feet hurt, you feel it too.

”I removed the bonfires. I mean shoes...” she writes in The Shoes the Bus and the Music. “I should have snapped their necks like stale bread sticks, tossed them into the a dumpster, and gone home barefoot...But I had to squeeze the monstrosities back on...”

Of course, she had me with her story, New York City Walk, in which she perfectly describes the energy of the city that I miss so much:

Brenda volunteers a lot, especially with old people, so there are several stories about that including a lovely one titled, Everything Nothing Something, about a 90-plus year old woman that will break your heart in the best possible way, and reveal the best of Brenda too:

“'The truth is [says Bella], I don't want to leave my home, but you think I have options, huh?'

“'Bella' [says Brenda], 'as long as you have your marbles and can afford to live in your home, you've got this covered.'”

Weirdo Parfait is available at Amazon in paperback and a Kindle edition.

On May 1, I wrote about the newest attack on net neutrality and what it means for internet users (less access, higher charges). Now, the brilliant John Oliver and his staff to the issue.

When he did this last time net neutrality was threatened three years ago, so many of his audience followed his instructions to tell the FCC to keep net neutrality, they broke the FCC website.

That happened again this week (this episode was broadcast last Sunday night). Take a look at it – Oliver is serious and as always, so funny about it.

As Oliver explained in the video essay, the FCC made it so difficult and obscure to navigate to the page where citizens can leave their thought, he bought the URL, gofccyourself.com.

It is up and running as I write this on Saturday. To get to the FCC comment page, go to that URL, click on the word, “express” after which a new page will open where you can fill in the form and let them know that support net neutrality and Title 2.

Again, here is the procedure – Oliver had made it easy:


Do it, please, to help save the internet for everyone.

UPDATE: 7AM PDT: As Nana Royer notes in the second comment below, the FCC is not taking comments for a week or so. Here is the explanation from Oliver at that URL:

Hello! ​Because of a procedural quirk, the FCC will not be considering any comments on the issue of net neutrality that are submitted over the next week or so. ​ We'll update you when the comments are officially open again. In the interim, you’ll have to find something else to be mad about on the internet. Best of luck with that.

Ronni again: I'll remind you when it's up and running again.

This video is nearly 10 years old so perhaps you've seen it. I hadn't and it is so cute, so funny and so nice that it is worth resurrecting.

Maybe a "duck for all" is the answer to the anger problem. Have a great w/end, Ronni. Dee:)

I tried connecting with the fcc link; however, FCC isn't accepting comments on internet neutrality for he next week or so.

Love the owls in the vineyard segment.

Doctafil's been a treasure for years on this site! With three books (I own one) out in the world, it's good to know others are exposed to and enjoying her delightful, insightful writings. Congratulations, Brenda.

I note, only half in jest, that I wouldn't be surprised if the GOP declared being female a pre-existing condition, since it leaves us open to pregnancy and all its associated risks and complications.

In recent years SNL has become just a pale shadow of its former greatness, but occasionally they hit a home run. McCarthy's "Spicey" routine is one of them. I died laughing yesterday when the news showed her in costume driving her podium through the streets of NYC.

In this crazy topsy turvy world, one constant keeps me entranced: your Interesting Stuff on Saturdays.

You had me giggling with the Spicer Dance Routine and gleefully laughing with the Duck Story. Then of course, there was the chance to be among the first to get the book by DoctaFil (Brenda Henry) from Amazon.

Gofccyourself.com had me sputtering and I can hardly wait to make my opinion known when the time is right.

So, it's not even 9:00am where I live, and my day is already complete. Thank you.

"And, of course we all know men having nothing to do with the reason women need prenatal care. Right? Or is it only Republican men who think they know that?"

Right on and too funny!!

I'm back again with a rave review for <1>Weirdo Parfait. My first read was just for fun...I'll go back and read again, and perhaps even again. It's well worth the minuscule $3(US) price. Now, I have another of her books on my e-reader, Jive chalkin and look forward to another good read. It's another $3 bargain.

Ask for the books by name, because Amazon doesn't seem to recognize (!) Brenda Henry by author name yet. And they insisted that Jive Chalkin was only available in paperback until I persisted.

I had never seen the duck, loved it and wonder if it still riding?

I loved the owl in the vineyard video.

Congratulations to Brenda AKA Doctafil on her most recent book. I've enjoyed her comments here for years, now I'm enjoying her compilation of thoughts and observations.

I'm looking forward to the newest Melissa McCarthy/Sean Spicer bit tonight; the preview was titillating. It's amazing how much pleasure those few minutes of parody bring me each time she's on SNL.