PORTRAITS OF A CENTURY

”...has spent some time comparing images of people when they were young with their 100-year-old selves. His meditation on age is the basis for a thoughtful, impactful and deeply moving photo project, Faces of Century.

First example is Antonin Baldrman at age 17 and 101: 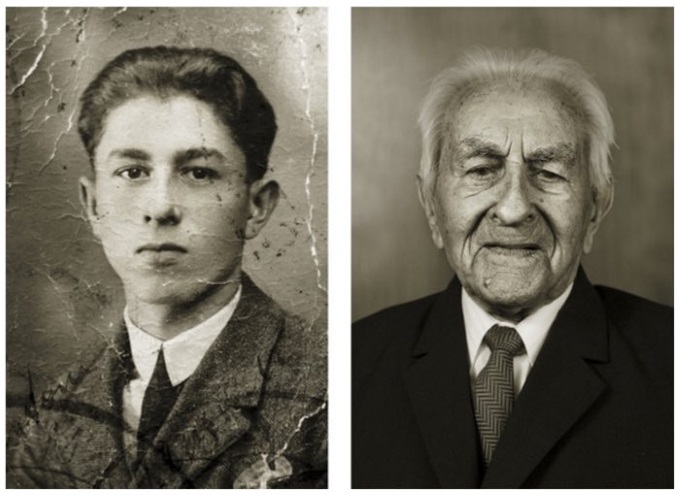 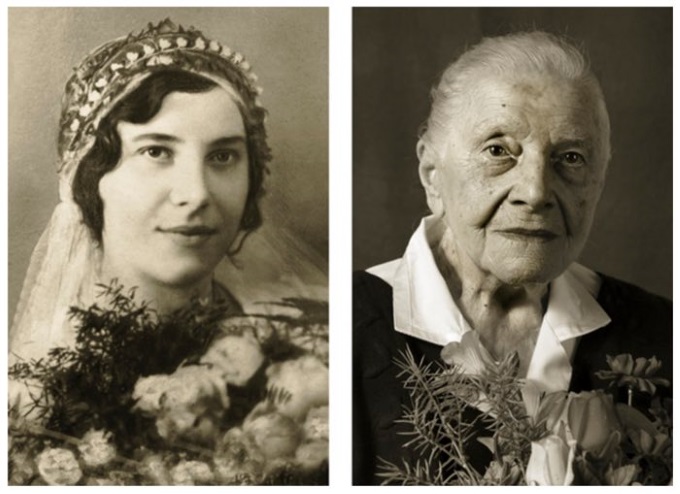 See more at Senior Planet and even more at Mr. Langer's website.

But I thought the story screamed for video and I found several at YouTube. Here is one of the many I found on this topic.

A more detailed story is at Mental Floss.

Vertical farms aren't new but this one, AeroFarms, is said to be the largest in the world that grows produce indoors without sun, soil or pesticides. Here's a short video:

There is a much more thorough story about it at The New York Times.

Last Saturday, I posted John Oliver's essay on Net Neutrality along with a link to the website he had set up to make it easy for all of us to tell the FCC what we think about the director, Ajit Pai's intent to kill equal access to the internet.

The response of viewers of the essay on Oliver's HBO show, Last Week Tonight, broke the FCC website which then announced it would not accept comments until after the FCC commissioners vote on the proposal. They did that on Thursday, voting 2 to 1 to end net neutrality.

"The agency is now inviting public comment on whether it should indeed dismantle the rules," reported the BBC yesterday. "Americans have until mid-August to share their views with the FCC.

"This call for comments is likely to attract a huge number of responses. Prior to the vote, more than 1 million statements supporting net neutrality were filed on the FCC site."

As I told you last Saturday, Oliver posted a web-only update which is well worth your time to watch – it's shorter than his usual essays, about six minutes:

As of late Friday, the Oliver link to the FCC comment page was not yet functional. I'll update here when it is. Meanwhile, here again is the procedure to leave your message to the FCC. Even if you left a comment before the website broke, please do it again as the FCC has announced that it will not count those earlier comments.

Again, here is the procedure – Oliver had made it easy:

When the comment page is available, do it, please, to help save the internet for everyone.

SOME GREAT ROCK AND ROLL DANCING

I used to be able to do this. Quite well. Many decades ago. This video calls it the lindy hop but when I was young, we called it swing dancing. It seems to me to be the same thing or close enough. Enjoy.

Oh, let's go ahead and have two dance stories this week. This one is a whole different kind, 21st century dance, with an important goal beyond the joy of dance itself. The YouTube page explains:

”Akira Armstrong started dancing at 8 years old and never looked back. She even landed a featured appearance in two Beyonce music videos, but when she decided to pursue dance professionally, she faced rejection from agencies because of her body type.

“She didn’t fit the physical mold of a typical dancer. So, Armstrong took matters into her own hands and started a plus-size dance company, Pretty Big Movement. “

Take a look – it's a terrific mini-documentary about what Ms. Armstrong is doing.

AHCA: HOW DID YOUR REP VOTE?

You wouldn't know it from the news coverage of all things Trump this week but the Senate Republicans insist they are working on a rewrite of the American Health Care Act (AHCA).

If you don't already know how your representative voted on the House version of AHCA, AARP has posted a list showing how all 435 member voted laid out alphabetically by state.

As John Oliver admits at the top of his HBO show, Last Week Tonight, you might think you don't care about a 24-minute video essay about dialysis.

He says – and so do I – that you would be wrong. This is an stunning expose of the for-profit dialysis business, deadly serious but as he always can, Oliver finds a way to make us laugh while educating us.

Okay, it's not as cute as the animal videos I usually post at the end of each Interesting Stuff column but it sure is amazing.

Thank TGB reader Joan McMullen for this one.

I danced it quite well too! We called it jitterbug back then. I miss being able to do it!

Cute fish. I need him to vacuum my floors....lol

How can nutritious food grow without soil or sun??

Jitterbug or swing, as I recall, but definitely not lindy hop. Used to practice by dancing with the door to my dorm room. But I didn't "fast dance" much until the twist came in.

Have tried several times to comment to FCC and the site is always down. Please keep reminding us because net neutrality is IMPORTANT.

That fish is absolutely amazing. So too David Attenborough and those BBC nature documentaries. He and they are gems.

It occurs to me belatedly that a hop was the dance event itself. So a lindy hop would be a dance event or party where people did the lindy. There was a popular song called "At the Hop" that I now have running through my head.

The dance was done to a medium tempo. The lyrics now escape me, but they ended "doing the Lindy Hop" and you kicked your leg out sideways on the word hop. Perhaps it was the forerunner of calling a dance a Hop.

The dance in the video would have been called jitterbug in the 30 - 40's as Pied Type mentioned.

Darn, the melody to the Lindy Hop is now an ear worm and I will be hearing it all day. I wonder what "At The Hop" sounded like. Perhaps Pied Type and I can exchange songs.

Never was a very good dancer but after a few vodka gimlets, I thought I was! As usual, John Oliver is terrific. Looking forward to sending yet another scathing message to the FCC about their most recent atrocious decision. As if the 1% didn't already own everything anyway!

Elizabeth Rogers -- yesterday on the NYC subway I saw a guy wearing a t-shirt that said, "Yes, you can dance!" -- Vodka
And, "At the Hop," -- I still have the 45rpm, sung by a group called Danny and the Juniors. Now it's my ear-worm, too, catchy lyrics, "You can rock and you can roll, do the stomp and do the stroll -- at the Hop."

Both dancing videos were terrific! I applaud the woman who persevered with her passion despite being told repeatedly that she wouldn't get anywhere. Persistence can often overcome formidable odds.

The piece on dialysis was another fine example of weird men who end up in positions of control and grow wealthy in the process. I can't help thinking more and more these days, that we have slipped into some sort of parallel universe where it doesn't matter whether things make sense as long as they make money.

And thank you for ending the post with a mood lightener. Although I loved the puffer fish, I have to say that David Attenborough's collection of these mindboggling videos leaves me wondering what really drives behavior. While I'm not inclined to believe in intelligent design, it seems a more plausible explanation than adaptation in many cases.

Mea Culpa. My faulty memory just betrayed me again. The dance I was describing was "The Lambeth Walk" and not the "Lindy Hop". Sorry.

Swing dancing has always been beyond my capabilities. But I can---and do---dance in my head and it's great fun.

The Lindy was before my time, but our Jitter Bug was similar, though not quite so professional. And I think the music on the video was from my era - rock and roll while the Lindy was Swing. But it is all fun and was great exercise.

I'm floored. I didn't know you could do that with a cantaloupe.