Old and Young Having Fun Together

Three or four years ago, I was invited to a “Brownie Day” at the Adult Community Center (ACC) – the name my town gives the senior center.

The nine-year-old members of a local Brownie troop (young Girl Scouts) each made a batch of brownies herself from a family recipe as refreshments for an afternoon of board games with members of the ACC, elders all.

At first, we were a little shy with one another; after exchanging names we were not sure what to talk about. But the ACC manager, who knows what she's doing, soon had us settled down at tables for the games.

By the end of the afternoon, thanks to the silly board games we played together with the sugar high from the brownies that had us all laughing and giggling together as if we were drunk, we actually shared some real conversation about our lives.

[You can find out more about that afternoon in this post from 2014.]

There is, in recent years, a lot of conversation around the need for more intergenerationality. That word is a mouthful and it sounds dull as hell. In most cases, it is.

Meetings are held, studies are done and with a few excellent exceptions, nothing happens beyond bureaucratic-sounding checklists of items that don't produce much substance. Like this one:

You can't say anything is wrong with those ideas except that there is nothing specific to hang on to, nothing that says, “Hey, let's give this a try.”

What if people whose hearts and minds are moving in the right direction talked about, instead – oh, say

• Young folks helping elders with technology
• Young and old making music together
• Playing games – silly ones and, for example, chess too
• A hike and picnic with one another
• Cooking meals together

I'm sure you can come up with more activities that old and young can participate in equally – the kinds of things that grease the wheels of conversation among age groups that don't get to spend much time together, and especially that lead them to laugh with one anther.

Something close to that has been happening recently in and around the U.S. Capitol. 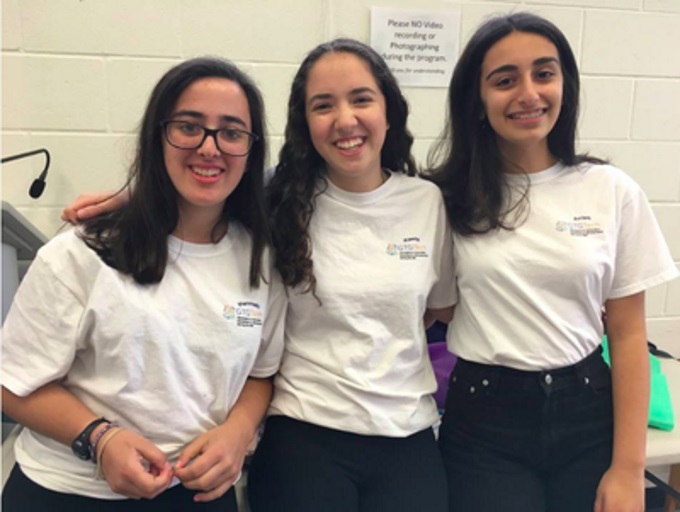 Last week, the Washington Post published a story about three 17-year-old high school students - Hannah Docter-Loeb, Kaela Marcus-Kurn and Aviah Krupnic - who started a group they named GTG Tech which, they say, stands for Generation to Generation and Grandkids to Grandparents and Giving the Gift.

”...they hold free training sessions at libraries, senior centers and community halls once a month [in the Washington, D.C. area]. It’s a nonprofit, volunteer group that’s growing as their friends join in to help.

“But it’s not like they’re trained computer experts, the girls reminded me. They’re working on the simple, everyday tasks that digital natives take for granted.

“'We just grew up in this, so we know how to do it,' said Kaela, a junior at Bethesda-Chevy Chase High School.”

Here's a short video produced by One News Page about GTG Tech:

A whole lot more is going on than showing an 80-year-old how to text her boyfriend, or helping an 87-year-old who didn't understand how to use Wi-Fi:

”...there is also something magic about the formula, the intergenerational exchange that happens when young and old interact, especially when they aren’t related.

“'It’s like a blood transfusion. It’s about more than computers,' said Renee Dunham, 78, after the teens helped her with text messaging. 'I learn a little bit about their lives. How they organize their lives, their phones. What they’re listening to or what tech they’re using.'

“And, Dunham observed, it came with no strings attached. No long debates with her granddaughter about her hair and make-up, no reminders to tell her grandson not to slouch.

“'Like you can’t teach a family member to drive. That never works,' Dunham said.” 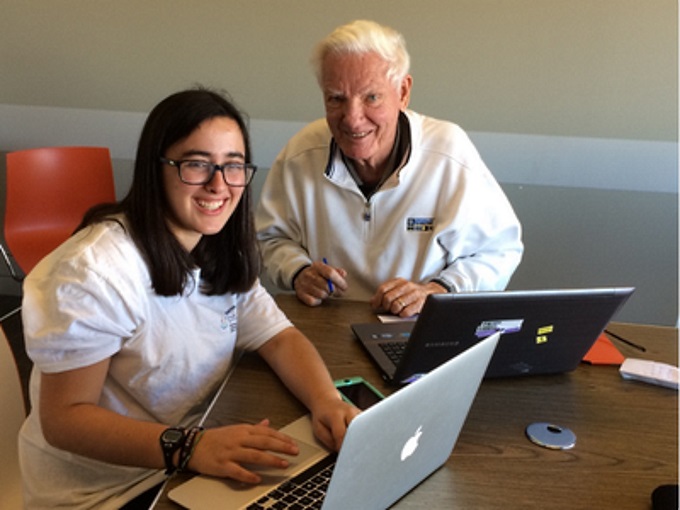 I'm not a sociologist nor a child psychologist, but those clauses I bolded strike me as right on the money with families. GTG Tech has been wildly successful both in terms of popularity and what young and old are getting out of it which is much more than instruction.

”Although it might be easy to make fun of Grandpa when he brings in his three maxed-out Hotmail accounts and isn’t sure how to delete emails,” writes the WaPo reporter, Petula Dvorak, “the teens have learned that he was once a hottie who flew warplanes. Or the lady walking with a cane used to be a ballet dancer.

“On a recent rainy Saturday at the Chevy Chase library, every GTG Tech slot was full. And for three hours, the teens gave digital advice to many interesting seniors: a retired linguistics professor, a pioneer FORTRAN programmer, a former wire service reporter.”

Grandchildren notwithstanding, few of us have opportunities to spend real time with people of a generation so different from our own, nor do many young people have reasons to hang out much with elders unrelated to them.

But in the case of GTG Tech, everyone is getting an up close and personal insight into what each other's lives are like - which is what happened to me with Brownie troop.

Do they give you any ideas? (The photos in this story are from the GTG Tech website which you will find here.) Intergenerational activities is a cool idea. I'm going to mention it to the director of our senior hall.

The most satisfying day job I ever had was implementing an inter-generational program at a nursing home with children brought over from a preschool for mildly- learning-disabled 3-5-year-olds. For over 8 years, every Monday morning, we sang, danced, made cookies, glued, painted, told stories, laughed and hugged together. It was a labor of love and so wonderful for the elderly, but also for the children, many of whom didn't get all the love they needed at home.

I loved this post, Ronnie! We have many activities which encourage inter-generational activities in our community. We need even more! They are so beneficial to both groups.

Great ideas, and will pass this info on to our Senior group.

I loved this idea. I'm too intimidated to ask someone my age for help and most of my friends know less than I do. It's a wonderful idea and would enrich lives on both sides of the computer. Sign me up!!!

I think this concept is terrific. Not sure how to get started, but an idea I had a while back was to pair a tech-challenged elder (that would definitely be me and a smartphone) with a young adult or teen who is working to improve their spoken and/or written English language skills. We'd both need basic grounding in the skill we want to learn in order to communicate at all, but I think something like this could benefit both elder and younger.

A local college has a program where students volunteer a semester at the ILR where I bus tables.

The students plan and direct activities, such as small container vegetable gardening, games and movie nights.

A student volunteered to drive any resident any time, to and from doctor appointments.

Living here at the ALF with lots of old people It's amazing to see how many of our residents "perk up" whenever a staff member brings their young child or children to work. The transformation from a sullen, maudlin old person to eager Grandma or Grandpa is amazing.

These sound like great programs. I'll put out the word that I'm eager to learn about some app intricacies from them if they'd like to learn some of the magic found in compound interest...from me.