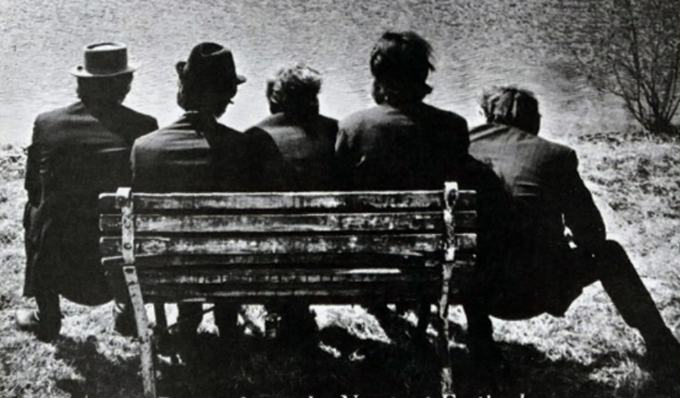 Very early in my blogging career I had a column on The Band. This isn't surprising as I think they were the most important band from the sixties and seventies (and I know many, nay most, will disagree with that assessment but that's the fun of blogging).

That first column rather concentrated on what the various members did after the demise of the group, so today it's The Band as an entity. And when I say THE BAND I mean the original consisting of Rick Danko, Levon Helm, Garth Hudson, Richard Manuel and Robbie Robertson. 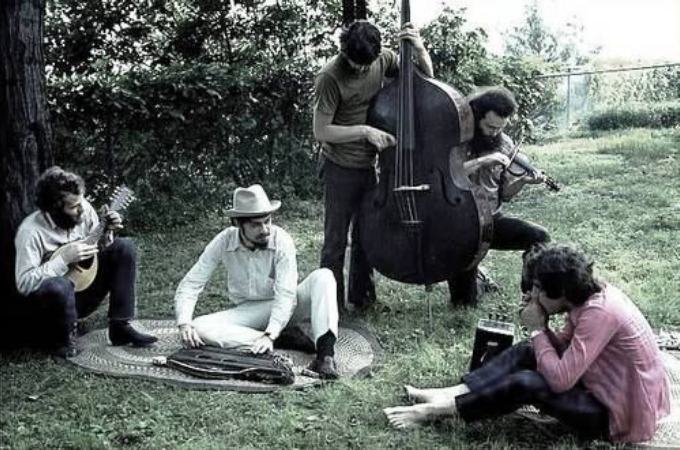 The rockabilly performer Ronnie Hawkins put them together as his backing band over a couple of years in Canada and all were from that country except Levon.

They were known as The Hawks. Later they went out on their own using that name (and a couple of others). John Hammond saw them perform and recruited them to record an album with him. He recommended them to Bob Dylan who was looking for a group to back him on his first electric tour. They were generally referred to on that tour as the band (lower case).

When they recorded their first album "Music From Big Pink" they were surprised that the record company called them The Band (they really hadn't decided on a name themselves). That turned out to be the most appropriate name for a group in the history of rock. 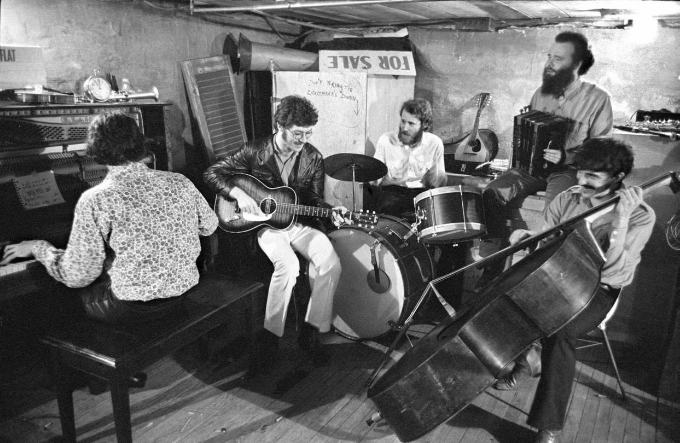 By the time they recorded that album they were seasoned professionals with more than 10 years experience behind them. From it is the first of their famous songs, The Weight.

Their second album, just called "The Band", is the best album in rock history. That's the one with The Night They Drove Old Dixie Down and Up On Cripple Creek, but I'm not going to play either of those. Outside of Woody Guthrie, not many songs have been written about unionization. The Band did just that. It's also about bringing in the harvest. It's called King Harvest (Has Surely Come). 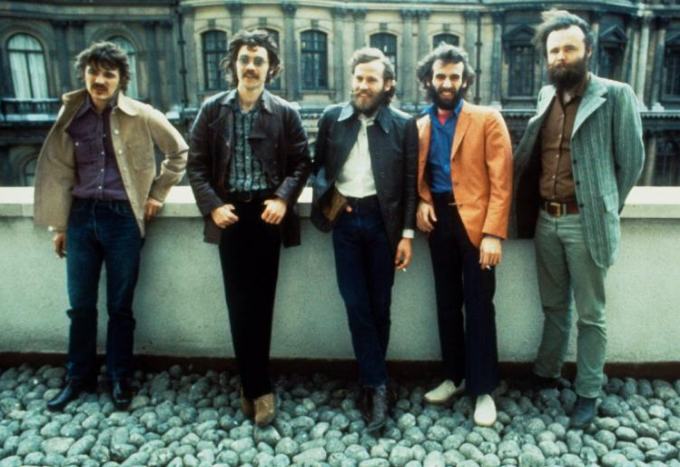 The album also contained probably the best song about ageing produced by relatively young men – they were in their twenties when they wrote and recorded the song Rockin' Chair.

After the first two albums, the critics liked to downplay their next album "Stage Fright". They were wrong; this is better than "Big Pink" and nearly as good as "The Band". 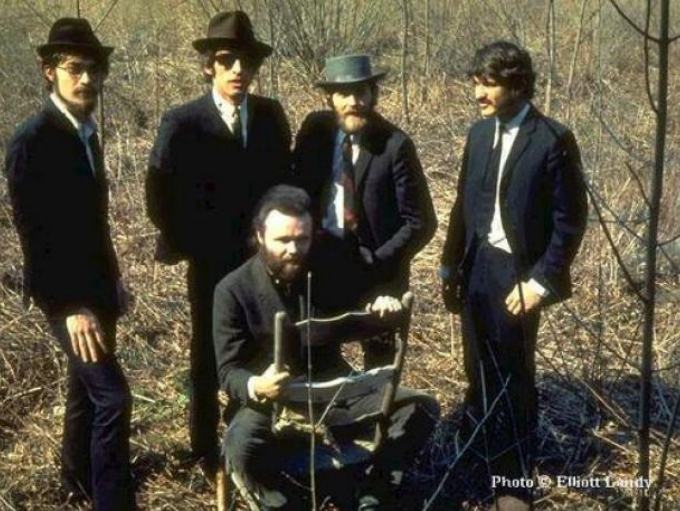 By this stage they were all disturbed about the adulation they were receiving, thus the name of the album. Also, after so many years as a tight group, brothers even, cracks were beginning to appear. I don't know if All la Glory is indicative of that, but it's the next song. 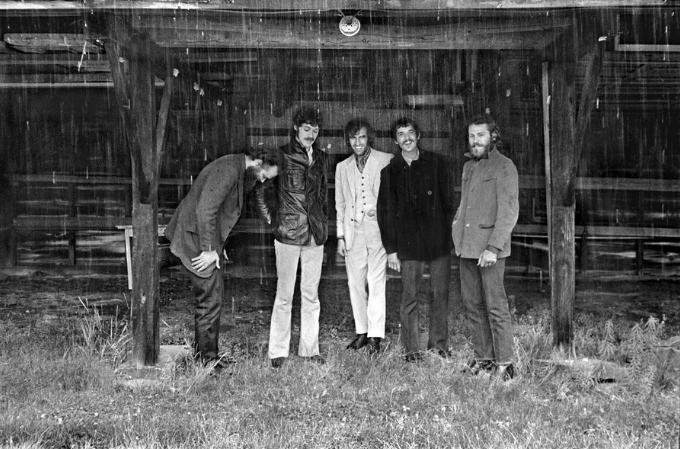 The influence of Bob came to the fore in the next song. He liked to throw biblical allusions into his songs, and The Band, or Robbie who wrote most of the songs, took that on board now and then.

I'm pretty sure there was no sacred harp in the bible, but I could be wrong. It's a good song, though: Daniel and the Sacred Harp.

♫ Daniel and the Sacred Harp

By number four they seemed to have lost their mojo, as evidenced by "Cahoots". 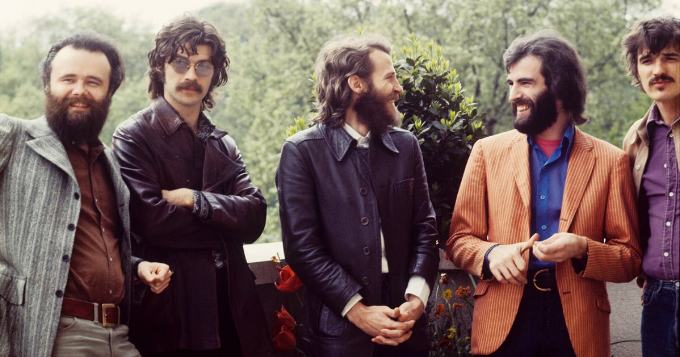 Of course, a lesser Band album is better than just about anything else around. I surprised myself by selecting two songs from the album, the first of which is rather odd, Shoot Out in Chinatown.

♫ Shoot Out in Chinatown

The next is obvious (well, it is to me). They were living in Woodstock, New York, before that town got overrun by musical tourists. They were quite a few other musicians living there at the time as well. One of those was VAN MORRISON. 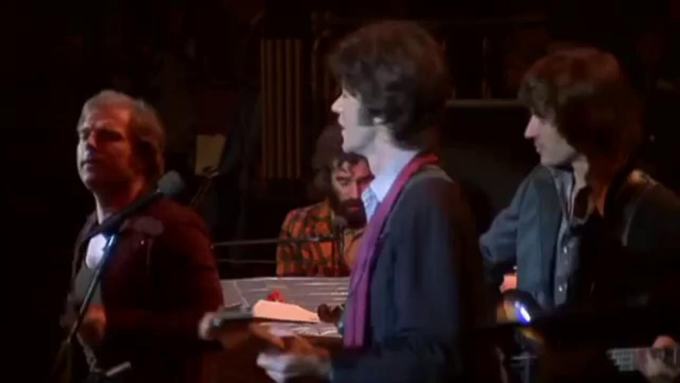 He dropped in a recording session one day and traded vocals with Richard Manuel on 4% Pantomime.

We'll skip over "Moondog Matinee", an album of cover versions of old songs they used to play when they were starting out, and return later to the next one, "Northern Lights – Southern Cross". That brings us to "Islands", the contractual agreement record – their last studio album.

It wasn't very good and the best song they recorded for it was left off. Fortunately, with reissues of the CD version with all the extras we got it. The song is Twilight. 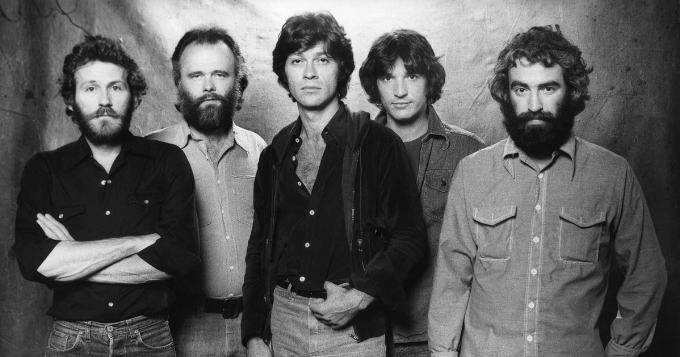 The Band went out with a blaze of glory with a Thanksgiving dinner and concert that was one of the major events in rock history. The concert was filmed by Martin Scorsese and it produced the best rock concert film ever. Someone who was invited to perform but couldn't make it is EMMYLOU HARRIS. 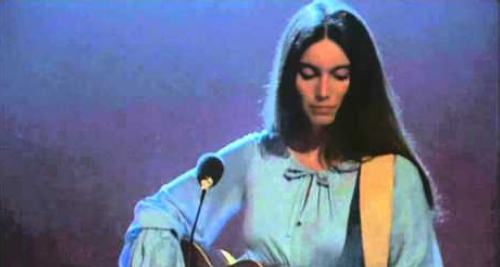 However, she got together with the group and they recorded a song that appeared in the film. That song is Evangeline (originally known as The Last Waltz). The song is excellent, and that is an extraordinary achievement as they recorded it only minutes after Robbie had finished writing it.

Getting back to "Northern Lights – Southern Cross", an album that ranks with the first couple, there's an obvious choice. 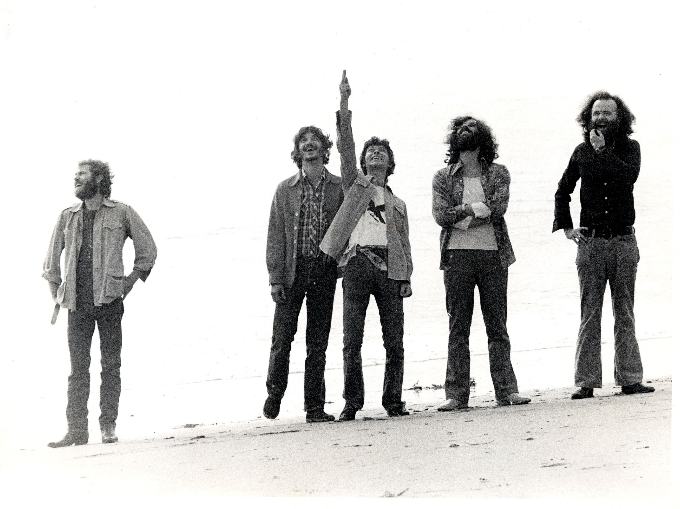 Norma, the Assistant Musicologist and I agree the next song is their finest (and boy, that's saying something). I'll end with it, Acadian Driftwood.

This is the only distinctly Canadian song in their oeuvre. It's about the French settlers in that country after the English defeated the French in the 1750s. They had a choice of remaining and living under the English, returning to France or, as the song describes, moving down to Louisiana where there was an established community.

As of this writing, there are only two members left – Robbie and Garth.

Good morning! Have you ever done a post about Ronni's favorite music? If so, is it still available. If not, would you do one, please and thank-you.

Thank you for today's post, Peter and Norma - in my lifetime, one of time's constants has been the Band played on.

Sometimes, musicians make art that indebly remains firm in memory and within a note or two of "Evangeline" and so many others, I throw my head back and let the music take me where it will.

Other musicians see other interpretations to their songs, and those are often as good or better than done by the Band. What's not to like!

Good to see your familiar column today. It is interesting as always, and a nice reminder that all still is well in Ronni's realm.

Loved it! Thank you, Peter and Norma

When you feel down & out, The Last Waltz DVD is the best "picker-upper" to help you get back up. I love the DVD, the music that also included Joni Mitchell & Peter Crampton & I almost forgot of all people, Neil Diamond. The crowd was spectacular & The Last Waltz is musical history at it's best. Robertson, by far, a stellar musician & writer. He also has a book out that I must get at the library. Many thanks to you both for this column. I just know Ronni loved it. Dee:)

Ronni worked hard to get this and my next two columns prepared in the weeks before her operation. You're a champion, web mistress.

Thank you for the trip back in time. Great to hear these songs again and let the accompanying memories flood my mind. 😊

Just to add a note of joy. Few of the thousands of albums I've owned have brought me more delight than "Rock of Ages," the Band's live album--with horns by the late, much-missed Alan Toussaint. Some absolutely stellar versions of the songs, and, of course, Bob Dylan as the guest. The cover version of "Don't Do It" is bounce, giggle, and smile.

Acadian Driftwood is a great song, however your description of what happened to the Acadians makes it sound like it was a free choice. It wasn't. Some escaped but many were deported (Le Grande Derangement/The Expulsion) under horrific conditions, families broken up, many casualties. Their land was taken from them; their homes, animals and crops were all destroyed.

Just discovered your web-site. Couldn't agree more about The Band's 'The Band'. Never tire of listening to it. Americana in all its glory. The wonderful music matched by the great album cover.

Awesome blog! Do you have any hints for aspiring writers? I’m hoping to start my own blog soon but I’m a little lost on everything. Would you advise starting with a free platform like WordPress or go for a paid option? There are so many choices out there that I’m completely overwhelmed .. Any ideas? Bless you! Check for essay writing service reviews