”When a crash occurs involving an older driver, it tends to garner media attention, whereas the same accident with a younger driver would not. 'That’s unfair to the general population of older adults, who are among the safest drivers on the road,' said Jacob Nelson, the director of traffic safety advocacy and research at AAA.'”

That doesn't mean old drivers can't use some helpful safety features and these days Brody, now arrived at elderhood, often writes about our issues. Like me, she sometimes takes her cues from what is happening in her life.

Recently, she bought a new car:

”...driving home from the Subaru dealer with the lane departure feature activated, I immediately saw one benefit: The car beeped me and displayed a visual image every time I got too close to either side of my lane when I wasn’t signaling a turn.

“Backing out of a parking lot, the dashboard backup camera assured me that I wasn’t about to hit another car or pedestrian, though I also used my eyes and mirrors as added insurance.

“...As someone with arthritic hands (among other body parts), I’m aided by power seats that can be preset two ways: one for my best driving position and the other to ease entry and exit from the car.

“Other useful features include power windows and mirrors, a thicker steering wheel that is easier to grip, keyless entry, an automatic tailgate closer and a push-button to start (and stop) the engine.”

I would like to remind us all that safety features of any kind originally meant with elders in mind are always, ALWAYS equally good for younger people.

You've undoubtedly heard all the back-and-forth on the Republicans' latest attempt to repeal Obamacare - you know, the Graham-Cassidy bill that will strip coverage from millions of ordinary folks so that rich people can have the huge tax cut candidate Trump promised them during the election campaign..

The Graham-Cassidy bill which Republicans want Congress to vote on without debate or discussion just might repeal Obamacare this time.

Late night host Jimmy Kimmel this week revealed Cassidy's horrendous hypocrisy on the subject. The video is a little longer that I usually post but it is important:

As the week has gone by, more terrible details from Graham-Cassidy have been released - or leaked. Such as this: 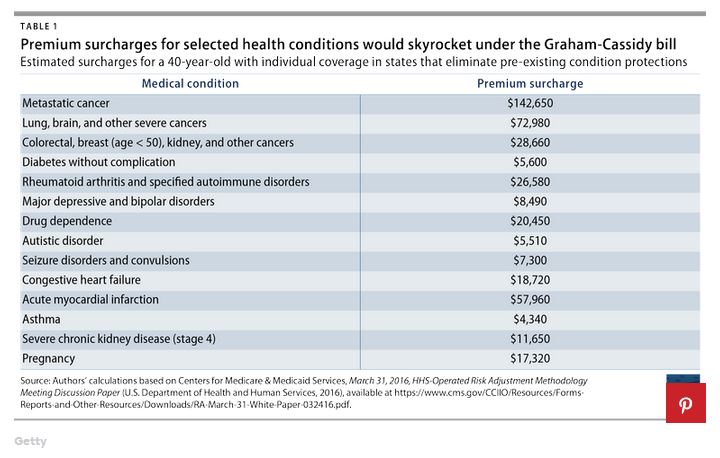 Much more information, including a larger version of that graph, about Graham-Cassidy at Esquire. (Thank you John Starbuck.)

I usually record the monologues of a couple of the late night hosts to watch the next day and it is recently becoming obvious that I have not paid enough attention to Jimmy Kimmel.

He's not always as serious as in the clip above. Sometimes he's pretty funny and in this one, Kimmel identified what he calls “The most uncomfortable display of affection between a husband and wife this year.” It is good to lighten our mood in the midst of Congress's ongoing determination to leave a vast swath of Americans with health coverage.

IT'S JUST A TV COMMERCIAL BUT WOW

It is an eye drops commercial from Germany. You would think, no big deal. Not a word is spoken but you won't miss the amazing point at the end of the 45 seconds. Really clever.

For many years when I lived in Greenwich Village, I regularly saw a man walking his dog who got around in a wheelchair to support his paralyzed back legs. Nicely done, I thought.

Then, a week or two ago I found this video about a man in a town on Taiwan, Pan Chieh, who makes similar wheelchairs for injured stray dogs. Take a look at his inspiring story.

It's been awhile since I've posted a domino line. This is not the longest one I've ever seen but I like it anyway. And it has garnered more than 40 million views in one year on YouTube.

Every year, the Merriam-Webster people announce the latest words they have found worthy to be included in their dictionaries. There are 250 new ones this year including:

bibimbap, a Korean dish of rice with cooked vegetables, usually meat, and often an egg, either raw or fried

Some words get additional meanings. Front is now also used informally to mean "to assume a fake or false personality to conceal one's true identity and character."

Terms like alt-right and dog whistle are from the world of politics. The latter began, of course, as something only for canines, but in political contexts it now refers to an expression or statement with a secondary meaning that only a particular group of people is intended to understand.

You can find out all 250 new words at the Merriam-Webster website. (Warning: a man starts talking as soon as you land there so you might want to turn off your audio.)

TGB friend, Chuck Nyren, who blogs at Advertising for Baby Boomers, sent this item that

”...makes use of Trump as 'raw material' and portrays him from an artistic perspective. The only considerations made by [composer and artis Avnere Hanani] were musical and aesthetic, with a touch of humor.

“Important to notice that no manipulation was made to Trump's speech. I did not touch the pitch or rhythm of his speech (just to make him suit the piano more easily), but rather left Trump's talk natural - "let Trump be Trump".

RARE WHITE GIRAFFE AND HER BABY IN KENYA

You may have seen this – it's been all over the feature news this week but these two exotic animals are so elegant looking that it's worth a repeat here.

They are two rare white giraffes — a mother and a baby — filmed in early August in Kenya after being spotted repeatedly since June in the Garissa County area.

They are white because of a genetic condition called leucism, which causes a loss of pigmentation. Leucism is different than albinism because multiple types of pigment are reduced rather than just melanin.

There is a detailed story about them at The New York Times.

Saw the same Times article and bought the same car five years ago for the same reasons. Except, five years ago, the lane departure feature wasn't available. Nor was the front end crash detection/avoidance system that many cars now have. I wish I had both, just because. Because these new features keep coming out, the author suggested leasing, not buying, so we could keep updating. And here I thought my new car would be the last I ever owned. At least it's paid for. I also overlooked getting a power liftgate, since I'd never had a car with a tailgate. Increasingly I'm regretting that oversight.

Thank you Ronni, great mix this am. Re-posted a couple of these on f-book. Always love new words, bibimbap is about what I fix for dinner each night.

If those auto safety features had been available 25 years ago I might still be driving.
Too soon old.

I can't imagine anybody spending 25 hours doing the boring repetitive work of setting up dominoes that will go down in a minute. I can just envision being halfway through and accidentally hitting one and watching in horror as the entire project is wiped out. That girl has more nerve than I would.

So grateful for story about Pan Chieh and for the domino line (always love the show!). Desperately searching for something to smile about these days.
Am rather amazed that it only took the young woman 25 hours to set all that up! Very impressive.
Sending love and good thoughts your way always, and always with gratitude for your presence in our lives.

As always, a fun and informative Saturday session, Ronni. I look forward to all your posts, but the Saturday romp is extra special.
Thank you.
I also have a car with some of the features you describe.
I call it my "nanny car."
It locks all my doors for me, it flashes lights when I am 'too close' in the parking spot, it has the keyless starting button, but still needs a gismo to activate the thing. I live in terror of leaving the gismo in the car and having it self-lock the vehicle with me outside. I need a manual to operate the radio. Other than that, it's a fun car to own and drive.

The Jimmy Kimmel videos of the POTUS and the FLOTUS were sad and hilarious at the same time. The moment where he turns back to her during the inauguration and she smiles broadly then, as soon as he turns away again, looks like she muttering obscenities about him under her breath is incredible. They're beginning to remind me more and more of Michael Douglas and Kathleen Turner's characters from The War of the Roses.

I've never seen white giraffes before; they are absolutely ethereal!

Thanks for another Saturday of interesting stuff. I hope you're feeling well and enjoying these early fall days.

Thanks for the white giraffes - had never heard of this!

In two clips in the Jimmy Kimmel video, Melania appears to first think that she is doing something that will please Trump---a fairly creditable introduction and a glowing congratulatory smile after her husband is inaugurated. Then she is abruptly and jarringly brought back to reality by the husband who treats her not only like a trophy wife, but like a child who needs to be disciplined at all times. I would be tempted to feel sorry for her if not for the fact that she voluntarily married that dangerous controlling shithead, likely because he was super-rich. Nevertheless I bask in the schadenfreude of those moments when she publicly slaps his hand away.

Really exceptional collection of items I enjoyed. Friends have one of the vehicles with all the bells and whistles which have enabled the husband to feel safe driving again and the wife to feel safe riding with him.

Leasing rather than buying a car is making sense for some older drivers now, too, with the rapidly changing technology features, I'm told. Need to do your homework before leasing though. Plus there are so many more options for being driven by others through senior offerings -- also, other commercial ventures that could be less expensive that owning our own cars.

Oh, boy, this was fun, interesting, a lift. "Earth is crammed with heaven," I think Emily Dickinson said that. And, I would add, lots of funny stuff as well.