Home About Archive Contact
A Portrait of Elders on the Internet and a Book Giveaway
ELDER MUSIC: Believe It Or Not

A week ago, I posted an important story about falling prevention. That prompted TGB reader, Henry Lowenstern to email this follow-up ditty titled, Vanishing Vanity:

I constantly think about forestalling
my ever present fear of falling,
but, am as yet too vain
to use a walker or a cane
and may some day end up crawling.

For two years, Americans – nay, the world - has been subjected to the vulgar, offensive, misleading, incomprehensible utterances and fairly constant lies from President Trump.

He can hardly open his mouth without revealing his ignorance, stupidity and lack of interest in anything but his own aggrandizement. The “leader of the free world.” Yeah. Sure.

On Thursday, Lt. Gen. Jay Silveria, superintendant of the U.S. Air Force Academy in Colorado, in no uncertain terms, took on an incident of racial slurs at the institution in front of all 4,000 cadets. This is leadership. Take a look:

To reiterate General Silveria: “If you can't treat someone with dignity and respect, then get out.”

EMAIL SUBSCRIPTIONS TO TIME GOES BY

Several messages arrived from readers this week notifying me that their email blog posts were not arriving as usual. This is because they are subscribed through Feedburner which hiccups every now and then, throwing people out of the system.

Google owns the email distribution system, Feedburner. They stopped servicing it five or so years ago and it has been deteriorating every since. So from time to time, it stops working for some people.

When it was announced that Google was abandoning Feedburner those several years go, I contracted with a paid email and rss distribution service, Feedblitz. (Yes, the two names are confusing.)

So, if you are still subscribed via Feedburner and want to ensure email delivery of Time Goes By, go to the top right of any page here, fill in your email address under the header “Subscribe” and your delivery problems will be solved.

I'm pretty sure I've posted this before – a few years ago – but I can't find it and anyway, it's really funny. Thank Darlene Costner.

This is gorgeous, a 30-year labor of love. Here's what the YouTube page tells us:

”In Bishopville, South Carolina, Pearl Fryar is a local gardening legend. When he first moved to the small town in the 1980s, he was almost unable to build his house because neighbors feared that as an African American, he wouldn’t keep up his yard.

“Determined to dispel that stereotype, Fryar went on to win 'Yard of the Month' from the local garden club. Since then, he’s created a world-renowned topiary garden with more than 300 plants, most of which were rescued from the compost pile of a local nursery.”

This week a gigantic, new trans-Atlantic data cable between the U.S. and Spain was finished. I mean huge: it can transmit 160 terabits of data per second which means, according to USA Today:

”To put that in perspective, when you break it down into the gigabytes we're familiar with, 160 terabits equals 20,000 GB of data. So, let's say you're downloading movies that are 2 GB in size, you could download 10,000 movies in one second.” 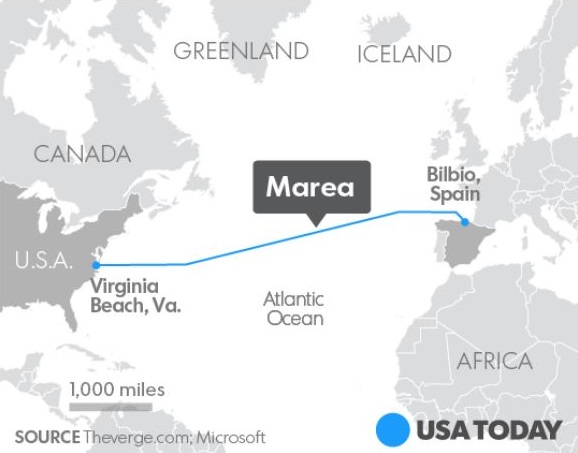 The cable was funded by Microsoft and Facebook. You can read much more about this cable named Marea (Spanish for wave) at USA Today, MIT Technology Review and Engadget among other sources.

Zembla is a Dutch public television program. The show has been tracking Donald Trumps questionable financial connections to Russia and other sources. The third installment of the series was released on YouTube this week titled: The Dubious Friends of Donald Trump – Part 3, The Billion Dollar Fraud.

You can watch it right here or at YouTube.

The first two installments, both published last May, can also be seen at YouTube:

Read more about these documentaries at Alternet.

WHY DOUGHNUT BOXES ARE PINK

It's not so at my favorite doughnut shop where I live now, but pink doughnut boxes are pervasive in a lot of other places like New York City and Portland, Maine, where I lived before.

Here's the story about why so many are pink.

Gen. Silveria is right. We need to treat each other with dignity and respect and engage in "civil discourse." Disrepect, hatefulness, destruction of property, violent demonstrations, etc. will earn nothing but disrespect, distrust, and dislike. Regardless of one's personal beliefs, "do unto others ... " has always been great advice. Perhaps the general should have defined "civil discourse" because too many people today seem unaware of what it means.

How interesting -- there's a Donut (hate that spelling) King here in Salem, Ore.
An east Asian family business I think -- I will check out the box colors and report back. Doughnuts were a big ritual thing in the Navy training program in the 70s and 80s -- at qualification boards, savvy examinees would bring a box of doughnuts for the board members.

As usual, an interesting compilation of "Interesting Stuff" for Saturday amusement and thinking, Ronni.

I wandered thru all the videos - well except for the "Friends" episode - as I decided not to spoil my day with that one.

The three-star general speaks well and uses powerful words. Now, will his follow-thru be as forceful and effective. Let's hope so.

That woodpecker video tells a grand story, and is very well photographed. Good find, for sure. Actually, it was difficult to leave some of those sites, as other videos beckoned...

I had never seen all 3 videos before and thank so much for sharing. Like the poster about sflichen I decided not to spoil my day with "Friends". I think its important to stay aware and engaged in politics but its also important for me to give my mind, body, and spirit a rest from that stuff on occasion.

If only * were to see the general & really hear his message. But he probably wouldn't "get" it! Dee:)

So the (white) neighbors were fearful that a (black) man would sully their neighborhood. Because he was black. I wonder how many of them questioned their erroneous assumptions and racist attitudes when he made their street aesthetically presentable and well-regarded.

The Air Force man is voicing what used to be considered humane without question and noted with similar outrage, at least where I've lived. How do our military academies choose openly racist candidates, and are we paying for their education and futures as military career people to lead upcoming generations? I hope they see the bottom of a boot or at least must undergo personal retraining.

So the woodpecker shows no mercy for the thief, especially after his laborious work making all those holes and carrying up the many nuts to fill them. Wonder what his beak is made of, as it seems much hardier than nails or teeth, yet must be light enough for him to glide through the sky. Then again, maybe a woodpecker takes the low road.

Thanks for another bunch of Interesting Stuff! I did watch the friends video and find it amazing what goes on that most of us will never really know about. Now I suppose I need to go watch episodes 1 and 2.

I loved the woodpecker and squirrel piece, although I do feel sorry for the squirrel. This plays out almost daily in my backyard, among woodpeckers, bluejays, squirrels, nuthatches and more. We have no acorns, but I buy peanuts and black oil sunflower seeds that they all love.

I also enjoyed the USAFA video, though it's still disturbing that messages like this need to be delivered to adults, especially ones who are voluntarily serving their country. My husband and I spent much of the last two weeks watching Ken Burns' documentary on the Vietnam War, so I really should know better than to think that just because they're in the military their character and behavior are beyond reproach. Actually, most of the footage shows young men in some of the most awful conditions imaginable, yet carrying out their assignments and watching out for their fellow soldiers in a remarkable show of bravery and resolve. Still there were those episodes on My Lai that remind us that human beings are far from perfect. Of course, all we really needed to watch to know that was the conduct at times of some of the top leaders in both Vietnam and the U.S. It surprised me how many times I found myself noting similarities between Johnson, Nixon and Trump.

Powerful speech by Lt. General Silveria. Thanks, Ronni, for showing us what the Oval Office has been missing for 8.5 months.

What is it about this country that allowed it to elect this man as president? A a citizen, I may have issues about a policy or problem that touches me personally, but I'm also able to judge the qualifications for office of someone promising me the moon. On almost every measure of character, knowledge, and experience, Trump failed the test.

Fascinating collection of “stuff” as usual — some new to me. Good for a few laughs and more serious matters needing lots of exposure, such as “friends”.