Myths About Our Ageing Brains

EDITORIAL NOTE: Today is a holiday in the U.S. and I'm giving myself a little extra time off – mostly by republishing a post from AARP. If, like me, you're one of the people who have issues with AARP, calm down. This is informative work from one of their research organizations. 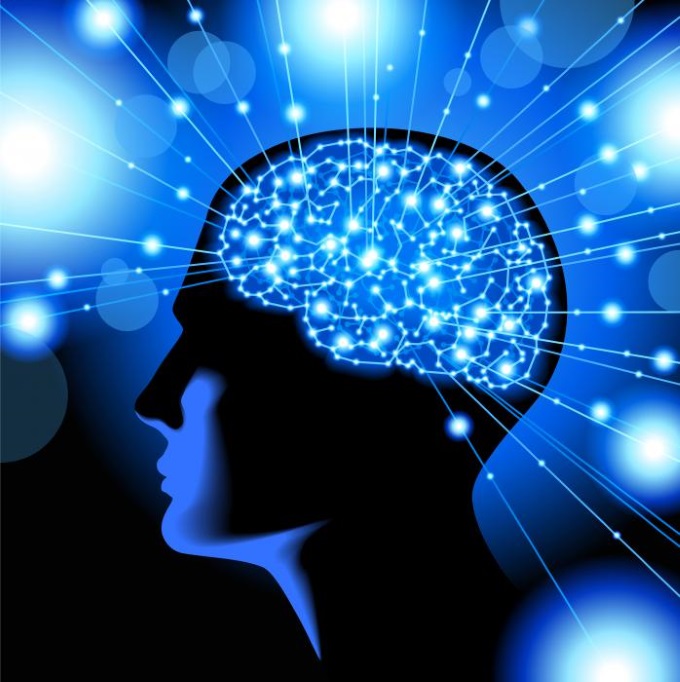 There is a lot of nonsense promulgated about ageing brains. Yes, we find oursevles forgetting names or losing too much time looking for our reading glasses but most beliefs about cognitive decline in old age are myths.

A few weeks ago, the Global Council on Brain Health (GCBH) which is an independent collaborative of scientists, health professionals, scholars and policy experts that was convened by AARP and recently issued their 2017 report on cognitive ability and brain health.

Here are seven of the myths identified in the GCBH survey as reported by AARP:

“1. Older people can’t learn new things. Not so. Trying new activities can actually stimulate cognitive skills. Seeking out new social connections that involve learning names and information about the people you meet, going back to school and taking up a new musical instrument are just a few examples of activities that can boost your brain health.

“2. You’re stuck with the brain you were born with. Also not true. Brains are made up of cells called neurons. While it’s true that most of the neurons are created before birth, studies have shown that new neurons can be created in the area of the brain that deals with learning and memory. Researchers hope that by better understanding how new neurons are created, they can help individuals with brain injuries and neurodegenerative diseases.

“3. Experts don’t have a clue about how the brain works. Actually, scientists are learning more about the brain every day. Granted, it is a complicated organ. But new treatments for neurological conditions are coming to light, and researchers expect exciting breakthroughs down the road.

“4. It’s inevitable that older people will get dementia as they age. Not true. Dementia can be caused by Alzheimer’s disease or age-related events, such as a stroke. But getting older doesn’t automatically mean you will get dementia. And it doesn’t mean you are developing dementia if you can’t remember the name of an old acquaintance you run into at the grocery store.

“5. Learning a new language is for the young. It is usually easier for children to pick up a new language, as sentence structure tends to be less complex for them — and they tend to be less self-conscious when trying something new. But adults also can learn a new language. In some countries, such as Sweden, it’s common for retired people to take classes for a third language.

“6. Older people are doomed to forget things. Being forgetful about details such as names and facts happens to everyone, no matter his or her age. Poor memory can often be attributed to lack of attention. Some helpful tips on remembering include writing things down (such as shopping lists) and taking note of visual details associated with your surroundings.

“7. Just take memory training, and you’ll be fine. Not exactly. While it’s a good idea to look for ways to fine-tune your memory, if you don’t practice those skills and keep challenging your brain, all that hard work will be wasted. It’s the ultimate 'use it or lose it' advice.”

There are a lot of things we can do to maintain our cognitive abilities as the years pile up. (By the way, widely advertised “brain games” are not one of them. Repeated research over several years has shown that their value is iffy at best.)

But cognitively stimulating activities are. Here's a GCBH infographic about with an overview of how to keep challenging your brain: 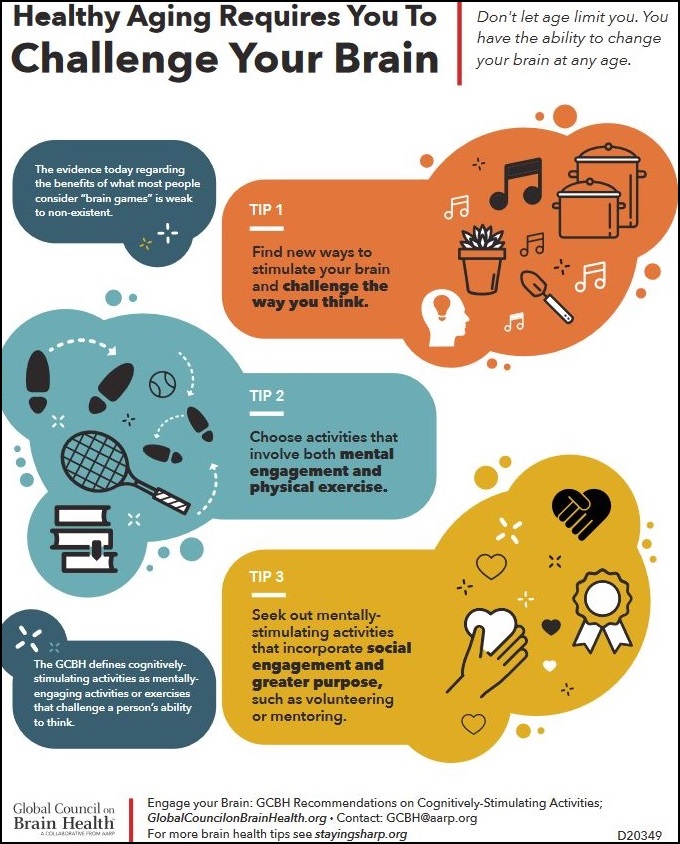 And here is a GCBH library page with links to many other sources of brain health information.

I very welcome post! I am one of the many who lose my reading glasses continually, and can't remember the name of the most recent movie I saw! Good to know I'm not on the road to complete and utter deterioration!

...and that goes for inserting extra words in comments too—as in my first sentence!

Some of these myths about aging die hard. Here's an interesting example:

On Saturday my husband and I went to a local iHop for breakfast. As we ate, I could hear music playing in the background --- specifically a man singing "When a man loves a woman."

I asked our young waiter who was singing, but he didn't know. The next day for some season, the name flashed into my mind. It was Percy Sledge.

I hadn't thought of him for many years, so I went to YouTube Music and entered his name. Sure enough. That's who it was. (Otis Redding also sang it, but I didn't associate that song with him. )

Just another example of my Rolodex Theory of Recall. You can't force an answer, but it will come to you in time.

Madeleine Kolb: I love that. The Rolodex Theory.

I have come to think of the Internet as Personal External Memory. Thanks to associations, I can eventually reach any memory-lapsed detail within a few minutes of searching.

It also seems that the more patient I am with myself, the shorter the lapses become. Getting in a panic about forgetting only exacerbates the situation.

A friend is a huge fan of ballroom dance. The social aspect and the patterns learned, in time to music, seem to not only refresh her mentally but also quell her anxiety and depression (lifelong struggles). She attends as many classes per week as her bodily limits allow, and goes on winter dance vacations in Mexico and on Mediterranean ballroom dance cruises. She is now the happiest that any of her friends remember seeing her in over 30 years.

All these activities to power up the old codger's brain............I don't want to play those, but do love to learn new things about my interests..........the things I love. That, to me is the important thing, doing what we love automatically opens us to new learning. Not to say my brain is with it all the time, far from it. I like to play how many numbers can I remember when paying the bills each month. Anyway, I'm not going to do activities just to exercise my brain for fear of losing its power, what a nuisance on top of all the other many nuisance have-tos that go with aging!

Thanks for bringing this good article out for inspection, Ronni, and yes I had to calm down because AARP and I have had "issues" too. But I'm glad I read it.

Sometimes I do wonder about this filing system we carry around with us in our heads.
If only we could retrieve anything we want at any time. Not to happen.

I have solved one age-old problem by insisting to myself that the keys to my kingdom only sit in one place when not in use. I spent too many hours, or perhaps even weeks of my time, searching for them.

Now, if I could only solve the other age-old problem - getting the younger set to understand that us "old folks" still have our marbles and do not need to be talked down to. I'm not exactly joking with that last crack.
:)

I have a younger cousin who is helping care for a woman with dementia. I have learned much about the disease since becoming interested in her symptoms. One thing that reassured me is an early symptom of forgetting how to get home. I am very sure that hasn't happened to me s0 far. I no longer worry about forgetting words like I used to.
I could have spared myself a lot of worry if (as they say) I knew then what I know now.

Doing research on the subject is reassuring as well as fascinating. The brain is a very complicated organ and they now know so much more than they knew when I first became aware of the disease.

Doing some brain exercises may not be much help with memory, but it can't hurt.

Memory? That's what Google is for. I keep my finger on the Google button as I talk on the phone and I am very good at going um...um...um...until the word or the name of the movie or actor, or whatever term I'm groping for "comes to me."

Me too! As Emmajay stated, google is my best friend.
Getting old is not what I expected when I got to my '70's.
I do look forward to reading the blog from Ronni.