About half of this week's items are about animals. Maybe after such a horrendous political and weather week, it was just time to enjoy the sweet innocence of our furry and feathered friends.

A lot of websites posted photos of people and their pets in the watery mess of Hurricane Harvey. Here are a couple of examples. 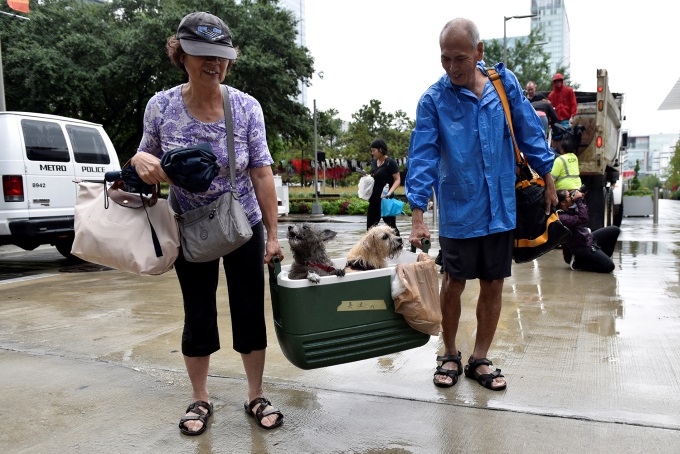 You can see more at The Atlantic and many other places around the web.

In terracotta jars in a Sicilian cave, researchers have discovered what may be the worlds oldest wine, made in Italy more than 6,000 years ago.

”Previously scientists had believed winemaking developed in Italy around 1200 BC, but the find by a team from the University of South Florida pushes that date back by at least three millennia,” reports The Guardian.

“'Unlike earlier discoveries that were limited to vines and so showed only that grapes were being grown, our work has resulted in the identification of a wine residue,'” said Davide Tanasi, the archeologist who led the research.”

The article also reports that some people believe winemaking goes back as much as 10,000 years. You can read more at The Guardian.

WHY ARE SLOTHS SO SLOW?

”Sloths spend most of their time eating, resting, or sleeping; in fact, they descend from their treetops canopies just once a week, for a bathroom break. How are these creatures so low energy?

Some people are just amazing at what they can do. Thank TGB reader Darlene Costner for the video of this tree stump sculptor.

Many decades ago, I produced a short-lived TV program hosted by Matt Lauer long before the Today and when he still had hair. One of the best interviews we did was with William Wegman who was just then gaining renown for his photographs of his pet Weimaraners being oh so human.

Many books, gallery shows, calendars and more followed and now there is a new Wegman book of his Weimaraner photos through the years. A couple of examples: 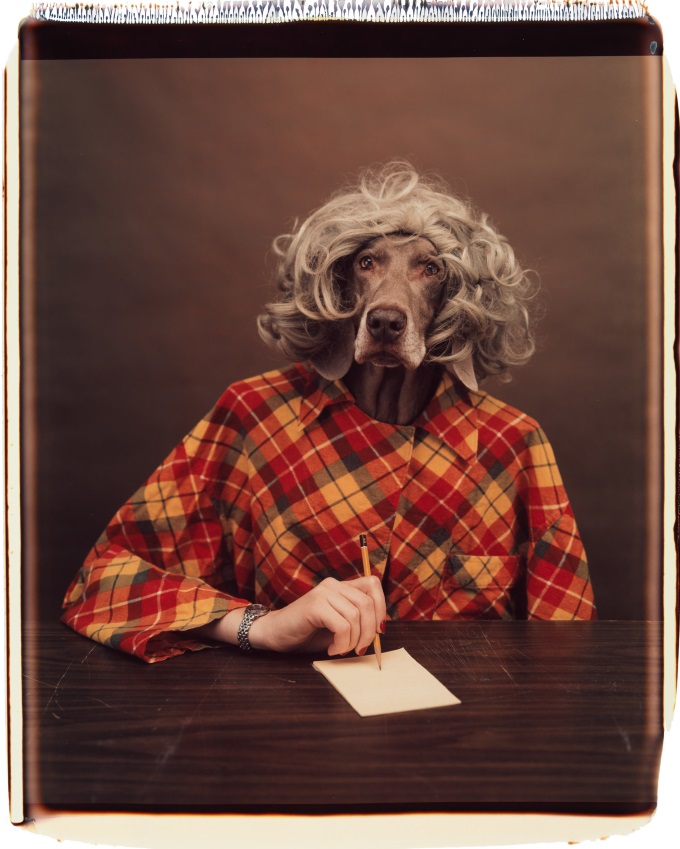 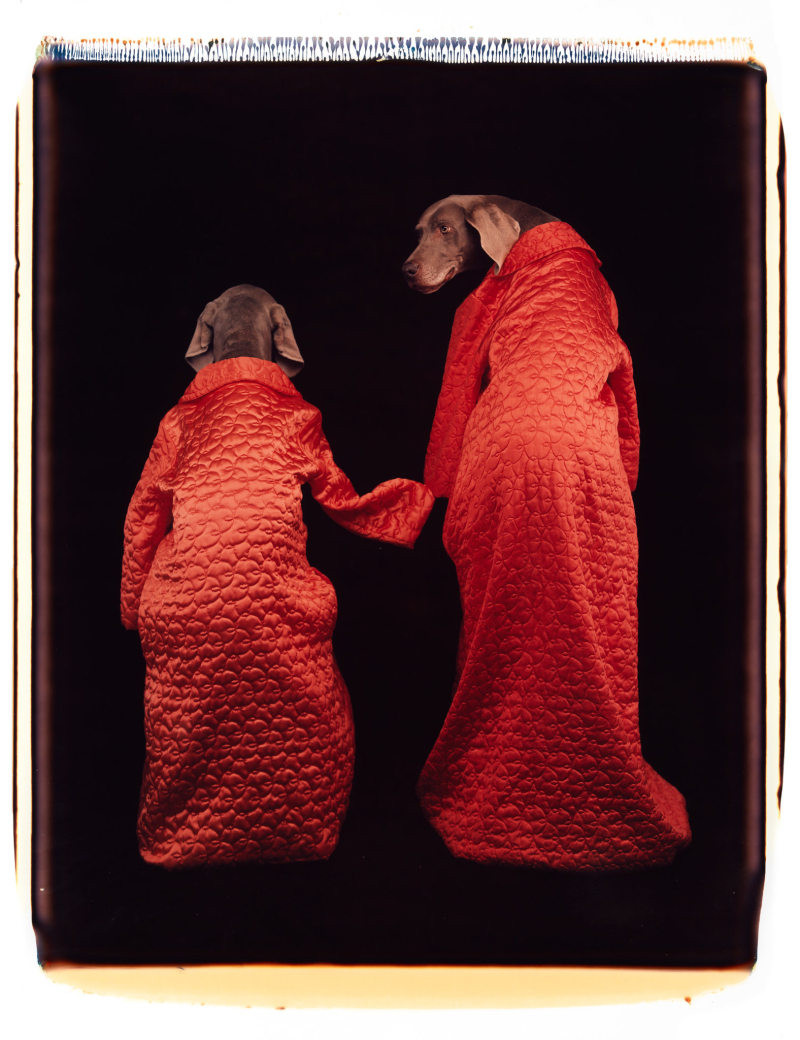 Wegman's dog images are always haunting, sometimes disturbing and definitely fascinating. There are more images in a story at The New York Times.

The new book, William Wegman: Being Human, contains photographs going back decades and will be available at the usual book outlets early in October.

When I was a kid growing up in Portland, Oregon, I frequently saw skywriters – usually advertisements but sometimes personal messages.

I don't recall seeing skywriting airplanes in any city where I've lived since then but last week I ran across this video about a company that has been skywriting all these years. If you want someone to do that for you, as the YouTube page explains,

”...Greg and Steven Stinis are the guys to call. The father-son team run the Chico, California-based company, SkyTypers, where they pilot airplanes to "write" messages and advertisements in the sky using specialized smoke.”

Sometimes it's just amazing how smart animals can be and it's not only crows. Darlene Costner sent this fascinating video from the BBC.

WHY WE CALL OUR PARENTS MOM AND DAD

For TGB word lovers, here's a terrific video about the origins – or, rather, possible origins - of what we call our parents, which is amazingly similar across cultures. Take a look – from Mental Floss.

It's hot here in northwest Oregon and it's been a hot summer all over the place. Here's a refreshing video of how hummingbirds deal with it. As wildwingsla, who posted this at YouTube, explains,

“A record 30 hummingbirds bathe together at one time during this morning’s wash! You’d never know they will be harassing each other in five minutes’ time...”

If this video has piqued your interest in hummingbirds and you want to know a whole bunch of interesting facts about them, Darlene Costner (yes, she's been busy watching videos this week), sent this additional video you can watch here.

A whole bunch of you, TGB readers, sent me a medical story published this week about the development of a deceptively simple test for pancreatic cancer – nothing more than a smartphone app called BiliScreen that uses the whites of a person's eyes to diagnose the disease.

PANCREATIC CANCER TEST
The reason the five-year survival rate for pancreatic cancer is only nine percent is that there are few symptoms and no tests to catch it before it has spread.

”One of the earliest symptoms of pancreatic cancer, as well as other diseases, is jaundice, a yellow discoloration of the skin and eyes caused by a buildup of bilirubin in the blood,” reports Science Daily.

“The ability to detect signs of jaundice when bilirubin levels are minimally elevated - but before they're visible to the naked eye – could enable an entirely new screening program for at-risk individuals...

“In an initial clinical study of 70 people, the BiliScreen app...correctly identified cases of concern 89.7 percent of the time, compared to the [bilirubin] blood test currently used.” 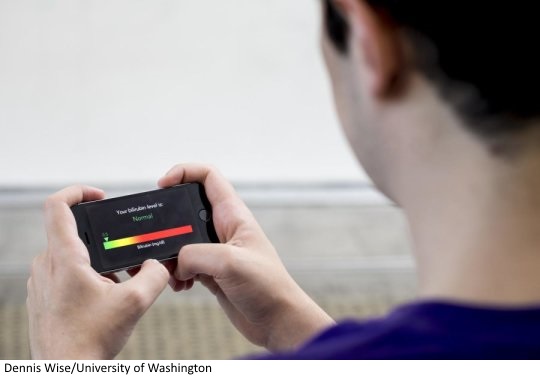 Of course, much more testing is needed but it sounds good, right? Well, pardon my skepticism.

For the 20-odd years I've been studying ageing, I've been subscribing to a variety of reports on health and medical developments and have been disappointed again and again.

They generally sound as amazing as this one and the medical media excitedly report them as breakthroughs that are “closer than you think.” And then they disappear never to be heard of again. And in this case, I wonder what who is "at risk" for pancreatic cancer. Until my diagnosis, no one ever mentioned that it was a potential problem for me.

Nevertheless, how I hope this is not one of the advances that disappears. I was lucky my diagnosis was early enough to treat. I would hope that everyone who is told they have pancreatic cancer could, like me, be eligible for the surgery. Early diagnosis is not a cure, but it does give a patient a better shot at it.

BLOOD TESTS TO DETECT CANCER
Also announced this month are several reports of the development of blood tests for cancer. In one, from the American Council on Science and Health, a test for a certain type of DNA would allow cancers to be detected at earlier, and therefore more treatable, stages:

”It was tested in people who were in an early stage of four different types of cancer: colorectal, breast, lung and ovarian. Using this approach, they examined 58 cancer-related genes.

“Out of the patients studied that were in the earliest stage of cancer (stage I), the ctDNA was detected in 50% with colorectal, 67% with breast, 45% with lung, and 67% with ovarian cancer.

“An even higher percentage of people were able to be detected from the pool of people with more advanced cancer."

A lot of researchers, including my surgeon, have been working to develop a blood test for cancer for a long time and they are increasingly encouraged. This, of course, would be wonderful for the same reason the Biliscreen app would be: earlier detection.

Here's my question about this one: All the test subjects had already been diagnosed with a certain cancer. If people not known to have cancer are tested, how would doctors know what kind of cancer the patient has?

Yes, I'm a skeptic. I've been disappointed too many times with “breakthrough” announcements and it seems to me that most advances in health care are rarely of the quantum leap variety and more of the small incremental steps variety.

But that doesn't mean I'm not hopeful.