What Medigap Changes Mean For Elders

[EDITORIAL NOTE: Today's post is a bit wonkier than I usually publish but it is important for U.S. readers who will become eligible for Medicare in the next two years, and for current beneficiaries too. It shouldn't be hard to follow.]

Since my pancreatic cancer diagnosis three months ago, I have blessed President Lyndon B. Johnson every day for his part in creating Medicare. With the price tag for my surgery and ongoing care already into high six figures, without Medicare I would be doomed – as many old people were before Medicare.

Now, there are some changes coming to Medicare that will make it more expensive for elders while also reducing coverage. This involves changes that Congress passed in 2015 to the supplementary (or “Medigap”) coverage.

(We are talking about traditional Medicare today, not Medicare Advantage plans.)

Medicap policies pay most of the 20 percent or so of doctor and hospital costs that Parts A and B of Medicare do not cover. The choices of Medigap insurance plans are labeled by letters: A, B, C, D, F, G, K, L, M, N. As the Chicago Tribune explained the coming changes recently,

”In 2020, people who are on Medicare and don't already have what's known as Plan F or Plan C Medigap insurance won't be able to buy it because the federal government will close those plans to new participants.

“That means that when people go onto Medicare at 65, or if they switch Medicare-related insurance during the next couple of years, they are going to have to be diligent about scrutinizing insurance possibilities before some of those doors start to close.”

Plans C and F are, according to The Trib, the most popular Medigap choices for good reason. Plan F, which I chose when I signed up for Medicare in 2006,

”...is the most comprehensive. It doesn't cover dental, vision, or medicine [no Medigap plans do], but if retirees pay their monthly premiums they shouldn't have to pay anything else for doctors, tests or hospitals. Even medical care overseas is partially covered.

“In other words, at a time in life when medical issues can pop up suddenly and cost a fortune, Plan F is predictable. Plan C is popular for the same reason, although it isn't as comprehensive as Plan F.”

When Congress enacted this coming change, the goal was to save money on Medicare. So as of 2020, the Part B deductible will no longer be covered by existing Medicap policies and Plans C and F will no longer be available to new enrollees.

People currently on Plan C or F, like me, will still

”...be able to shop your coverage. If another insurance company offers it at a better price down the road, you can apply to change to that insurance company’s Plan F policy...” reports Forbes.

“However, over time we can probably expect Plan F premiums to slowly rise, since the total number of people enrolled will be shrinking annually.”

Meanwhile, it is not clear that this change will reduce Medicare costs. As Reuters reported when the legislation was passed in 2015,

“If seniors forego care because of the deductible, Medicare would achieve some savings. 'The hope is people will be more sensitive to costs and go without unnecessary care,' she says.

“'But if instead, some forego medical care that they need, they may require expensive care down the road, potentially raising costs for Medicare over time.'”

There is more detailed information at all the links I've provided above.

FIRST LOOK AT NEW MEDICARE CARDS
You can be forgiven if, thanks to the Experian Equifax data breach affecting 143 million Americans, you think this is too little too late. Also, the theft is so large, just assume you are affected.

Next year, all Medicare beneficiaries will receive new Medicare cards with a new kind of numbering system – no more Social Security numbers. Last week, Medicare released a first look at the new card: 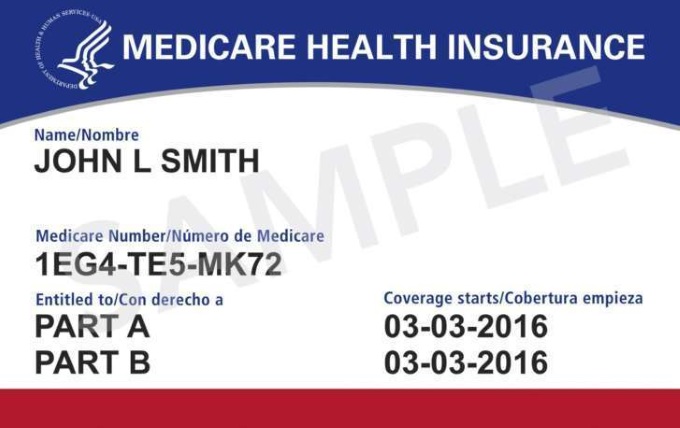 There are all kinds of things to know about this change you can find at cms.gov.

And if you haven't done anything to secure your stolen data from being used nefariously, here is a good instruction piece from The New York Times. It will cost you $20 or $30 to set up credit freezes and fraud alerts. And here is a later report from The Times answering reader questions about the data breach.

Yes, the system is ridiculous, I certainly agree with that! Regarding this development with supplemental insurance (which I've had for almost 20 years) I've been astounded to see the premium increases each year. Last year I called the company and was told that with advancing age the premiums increase due to OTHERS in the same age group needing more care. I had thought it would depend on my use only. Shows how much I know about the insurance business I guess. Anyway, looking forward it appears it will only go up, up, up!

Unfortunately most people pay little, if any, attention to what Congress is doing and are always shocked when a benefit is gone and they are paying more for less.
They grumble and complain and never do see the big picture.

The Republican party have been trying to chip away at Medicare, Medicaid and Social Security ever since they became law. Sometimes they enact bad bills that do not go into effect three years or so down the road. By then it's too late to do anything about it and the representatives who did the dirty work have been re-elected. Sigh!

Thanks for the information even though I don't believe this will change anything for me as I have Medicare Advantage, but who knows how long that will last?

I might add that we elders are all grateful to Lyndon Johnson, At least some of us are, but how many do not even know who to give credit to for our good fortune?

As an example, my co-pay for an ER visit is $75 and my daughter's is $400. She has employer based insurance.

That change to the Medicare cards is long overdue. Politicians are slow-witted. For years in Oklahoma my driver's license number was my social security number!

Thanks so much for this info. My husband is currently on Medicare and has a supplemental plan as well but I think we need to switch him to a differential based on this.

Thanks so much and prayers to you for your continued recovery

All my best to You!

PS put in the bucket of those who support I single payer system :)

Regarding SS#s, and privacy, that horse is long out of the barn. Those numbers have never been secure, and are certainly not to magically become so with this change.

And because I also can be a Grumpy Old Lady, I will just say: oh well, just another set of numbers to learn.

Not clear on these upcoming changes - does this mean that if you currently have plan F, you will have to pay a deductible when the law goes into effect? Or is this just for people who are switching over to plan F now from some other plan?

Not having to meet a deductible is one of the nicest things about plan F. It's not a large amount but you can be sure it will keep rising once we all have to pay it.

Just to clarify - the data hack was of Equifax not Experian.

Oops - Cindy is absolutely right. It is Equifax that was hacked, not Experian. My bad.

The Plan G is already a better value than Plan F today. In most areas it is anywhere from $250 to $450 cheaper per year, and the ONLY difference in coverage is that you pay the annual Part B deductible out of pocket, which is $183 this year.

And for Pamela, no ma'am, you will not have to start paying a deductible under Plan F. You will be able to keep your Plan F if you already have one, although you probably will not want to. Only people new to Medicare starting in 2020 will be unable to get a Plan F. However, people that keep a Plan F will be in a risk pool with no new healthier, younger people coming into the plan. Historically, that has meant large rate increases for those plans. Hope this clarifies it for you.

I wish someone could explain to me in plain English why I should keep my supplemental plan with my original Medicare and not switch to a Medicare Advantage plan. I'm in Florida and my friend has the advantage and pays nothing other than copays and I pay $160 a month which will probably go up, plus I have a deductible that she doesn't have. It does however include drug coverage. It is some sort of group medical plan and has no "letter" attached to it that I can see. But if I leave this plan I continued with after my husband died, I can not go back.

I don't understand any of it -- my husband seems to understand it and so makes the decisions for both of us...

Don't know what I'd do if he dies before I do. Just can't let that happen...

I just applied for Plan F last week. I originally thought I'd buy Plan G (same as F, but you pay the $183 Part B deductible). The insurance agent I was working with recommended Plan F, because it means less billing paperwork for the doctor's office, making me, as a patient, more attractive to them.

Ridiculous that medical professionals need to take administrative costs into account when deciding whether to take on a patient. Give me single payer, or give me Part F!

I like plan F and will keep it until the cost is untenable. I like the convenience of going in and out of the doctor and not paying a penny, and not having to follow up with the endless phone calls and emails to resolve the "pieces and parts" of charges I used to be billed for under my employer's program while I was working.

In addition, I have UHC Rx preferred for drugs, and just received notice yesterday that the premium is rising from $69 to $83 per month next year. I think that is a pretty hefty hike since it went up the same amount this year. My retirement plan includes a stipend to help pay these premiums, but it goes down by 3% every year while the cost of the plan seems to go up about 10%.

It's hard to catch a break anymore. Oh wait! I forgot - we are scheduled to get a whopping 2% Social Security increase next year! Does not make a dent in these premium increases...