HOW ELDERS ARE GETTING BY IN PUERTO RICO

This week, President Donald J. Trump tweeted that he is ready to abandon the American citizens of Puerto Rico. 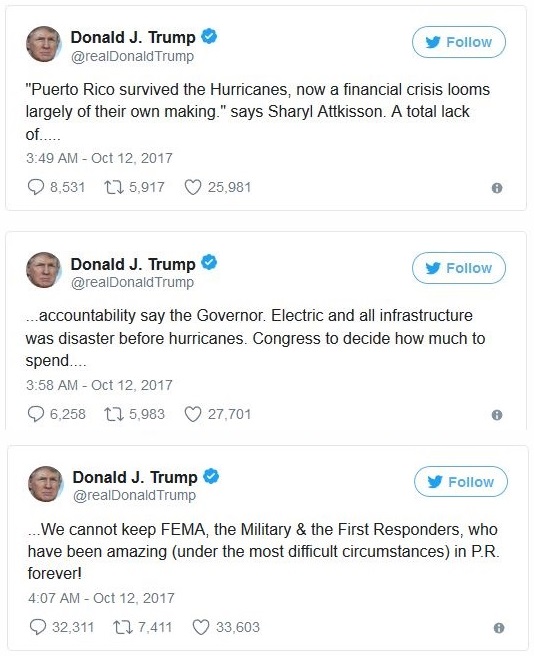 When he said this on Tuesday, FEMA estimated that 36 percent of the people still have no access to safe drinking water, food is scarce and 90 percent of the island lacks electricity.

On October 6 and 9, U.S. News reporter, Lisa Esposito, spoke by text and iffy phone with Paul Stearns who happened to be visiting his 81-year-old mother on the Puerto Rican island of Vieques when the hurricane hit and is still there caring for her.

Some excerpts from Esposito's conversation with Stearns:

”Since the storm I am surprised [at not seeing] any special attention being given to older adults and other vulnerable populations here on the island.”

”We are eating and [the] grocery store is open but [with] limited options for a healthy and balanced diet. Fresh vegetables have been nonexistent and [we] mostly count on canned foods. Our home and many others have electric stoves so it is difficult for me to make a balanced meal for her. I am currently using a single Sterno with a hibachi grill supported by two cans of corned beef.”

”After the storm there were people who could not get medicine such as insulin and inhalers because they had no cash. The pharmacy refused and it took a local hotel to front the cash. We are an all-cash society now.”

”On the day Maria arrived landline phone service was cut and we had no way to dial 911 and still don't since cellphone service doesn't reach every part of the island.”

”Some people have already left and more are planning to leave until the electrical infrastructure has returned…It is hard for [my mother] to get a good night's rest without [air conditioning] and some days she is overly hot.”

”One other item I'd like to add is with older adults and their pets: The Humane Society is here and I volunteered with them yesterday. I asked what was specifically being done to help these older adults with pets. There seems to be [nothing].”

That tweet (above) was Tuesday. On Wednesday, Trump said in the Oval Office, “It’s frankly disgusting the press is able to write whatever they want to write. People should look into it.” Here is a report about that:

As several reporters have since noted, a 71-year-old native American should know by now that the First Amendment ensures freedom of the press. More at Vox.

TOM TOLES' ON ENDING THE WAR ON COAL AND...

Washington Post editorial cartoonist, Tom Toles, did a masterful job of combining the president's various hints about possible war with North Korea (or some other country, depending on the day) and EPA chief Scott Pruitt's declaration that the “war on coal” is over: 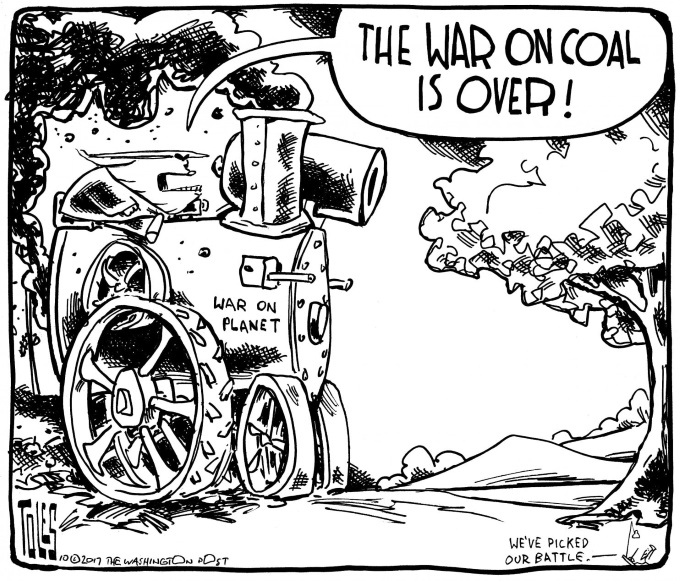 Amanda Marcotte at Salon has a good analysis of the war on coal pronouncement. Some excerpts:

"'The war against coal is over,' [Donald Trump's EPA head] Scott Pruitt announced with great fanfare at an event with coal miners in Hazard, Kentucky, on Monday. 'No better place to make that announcement than Hazard, Kentucky.'

“Pruitt's ostensible reason for this attempted rollback is that the Clean Power Plan was not crafted 'carefully, properly, and with humility,' but he hasn't taken any great pains to hide the real reason he opposes it: The plan encourages states to shift away from coal and towards natural gas or renewable resources to generate electricity...

“'Continuing to prop up the coal industry is bad for the economy, just as it’s bad for the environment,' Michael Brune, the executive director of the Sierra Club, told Salon.

“As Brune explained, the Sierra Club has invested immense resources — 160 of its employees — in the task of monitoring the nation's coal-burning power plants. What they've discovered, he said, is that coal plants are shutting down as other energy sources become 'more accessible and more affordable.' Since 2010, in fact, almost half of the coal-burning plants in the country have either been retired or have a planned retirement date.”

Breathing may become optional thanks to Pruitt.

Whew! That's a lot of hard-to-take stuff. Following is your reward for getting through it starting with

OH NO – HAVING ANOTHER A BAD DAY?

When I check the headlines each morning, I know just how the panda in this gif feels: (Via giphy)

BIRTH OF THE ISRAELI AIR FORCE

Almost every day now I need to find something uplifting or inspirational that restores my faith in the human condition. Here is one.

When Israel declared statehood on May 14, 1948, they had no air force. World War II pilots, mostly Americans, were secretly recruited and trained to help Israel defend itself from the Arab nations and were eager to do so.

The documentary Above and Beyond: The Birth of the Israeli Air Force was produced to tell the story. This is an excerpt.

Where I live, the fall color spectacular is in full, gorgeous swing. My friend, Darlene Costner, sent a series of stunning fall foliage photos.

As with most forwarded photo exhibits, there are no credits. This is, of course, no fault of Darlene's. For those of you who do not live near desiduous trees or do live in places on the globe where it is spring, here is a sampling of them. 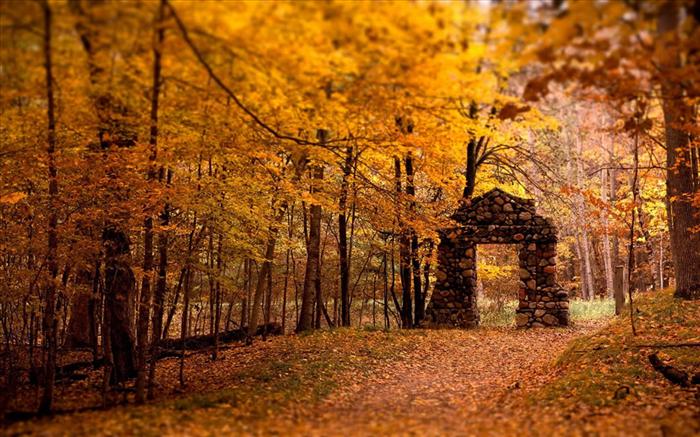 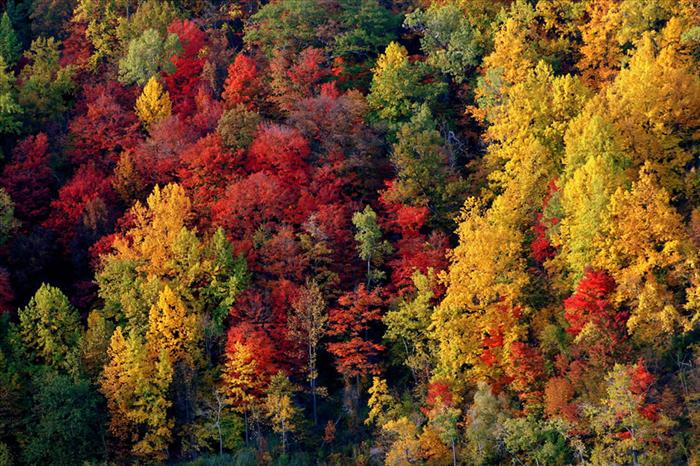 An email arrived this week from Jay Lawrence telling me about having found my story on the 1940's recording of Manhattan Tower which will be playing on his U.K. radio programme, The M&M Show soon. (Note my spelling of that word in deference to the origin of the show.)

It is actually two radio stations, referred to collectively as the UK 1940s and 1950s Radio Stations. I had not known of this website before and have been having a fine ol' time listening to songs of my childhood and teen years.

I'm telling you because I'm pretty sure a lot of the people who read this blog would like it too. You can listen live here.

Jay's THE M&M SHOW is broadcast at 6AM & 6PM GMT on the 1950s site. He also hosts a programme titled From Stateside that is heard daily on the UK 1940s Radio Station at 8AM AND 8PM GMT which is where the Manhattan Tower will be broadcast in rotation beginning today.

You can find out what time to listen where you live at this GMT time converter.

Frederik van Wijk is a chicken farmer in the Netherlands. Both he and a reporter broke into uncontrollable laughter on camera when the reporter realized that Mr. van Wijk's laugh sounds a lot like a chicken. Take a look:

Sand cats look a lot like your house cat but they are wild cats who live in the extreme weather of the African desert. They are also shy and are hardly ever photographed. This is believed to be the first-ever video of them.

The footage was shot by the Sand Cat Sahara Team. There is more to read at the group's Facebook page.

The panda bear saying "Oy!" The incredibly moving "Above and Beyond" clip. The concluding words in the wild sand kitties video: "Please don't try to acquire them as a pet, rather save an abandoned domestic cat!" For all these, you, and the TGB village, I give thanks.

I felt grumpy all day yesterday and didn't know why until I realized that each morning when I turn on my computer I read one bad news story after another and it really ruins my day. I know just how that Panda felt. I think I will save that to look at each morning.

I so appreciate heartfelt stories of the good people still around us. The story of the men who flew airplanes to save Israel was one of those good news stories that made me happy that there were, and are, still self-sacrificing good people in this crazy world.

The shy sand kittens were a great way to end today's selection.

I feel like that panda every time I see or hear political news. Thank goodness for the chicken farmer who actually had me laughing out loud. That felt SOOO good!

I don't feel grumpy in the morning. I feel anxious. Coffee helps, but the kicker has got to be that chicken farmer who made me laugh out loud as well. I should start the day with that--AND the panda.

Appreciate your focusing on the elders in Puerto Rico -- the failure of the US government to do its job of assistance is a crime, one more in a long catalogue from both Trump and mainlanders generally.

Here amidst the northern California fires and smoke, the media are playing and replaying heart-rending memes of how old people failed to escape. As we age, we cease to be quick on our feet -- and hence at risk even if we and those around us are more or less doing our best to live sensibly. Still, I don't like that we seem to be treated so similarly to incinerated pets.

As always, a thought provoking and sometimes amusing collection, Ronni.

The fall colors you show are far more beautiful than the horrendous flaming red variety that are "blossoming' everywhere north of the Golden Gate Bridge.

Glad to see that Sand Cat video at the end. Today is a perfect day for a cat treat.

I loved the post past the big cheese in charge of our country. I miss fall colors.

So much appalling by this Prez — Puerto Rico among the latest affronts. Panda says it all! Disasters reveal how much more vulnerable many are and who need special care. Enjoyed chicken laughter!

A friend of mine once asked me if I ever heard of sand cats that live in the desert.
Thinking that he said "Sam Katz", I replied "Yes, but I thought he lived in Brooklyn."