Thanks to her fiery dissents from the bench and that she is without question her own woman, Associate Supreme Court Justice Ruth Bader Ginsburg is a cultural icon, “the notorious RBG”, who has become an inspiration to young and old, especially women. But I suspect more that a few men admire her too. 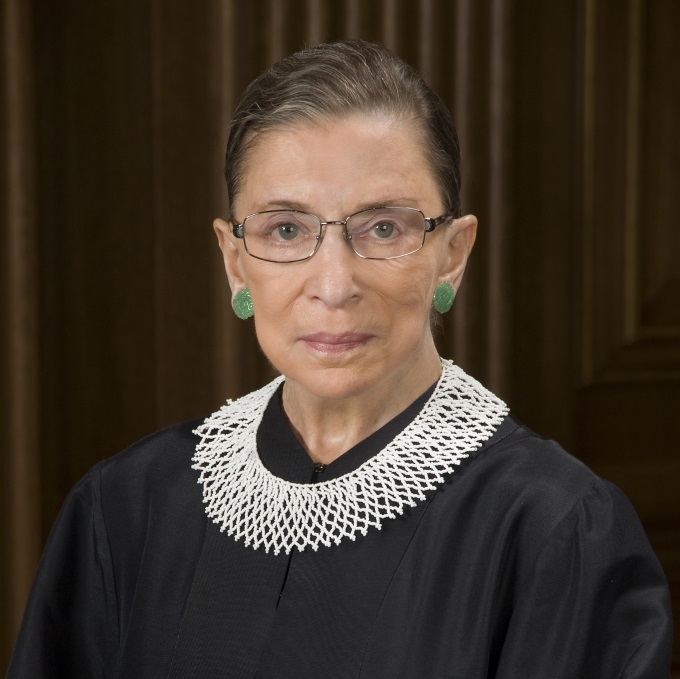 Among her fans it is well known that the 84-year-old successfully beat back colon cancer in 1999. My recently-found sense of connection with Justice Ginsburg is that in 2009, she was diagnosed with pancreatic cancer and although her tumor did not require the extensive Whipple procedure I underwent, part of her pancreas, like mine, was removed.

To regain her “strength and well-being” following the 1999 surgery, Ginsburg began regular workouts in the Supreme Court gym with a personal trainer, Bryant Johnson. As soon as she could following the pancreatic cancer surgery in 2009, she resumed her exercise routine with Johnson.

”At a pace I could manage [after the first cancer surgery], Bryant restored my energy as I worked my way back to good health," says Ginsburg.

“Ten years later, in 2009, another challenge confronted me. The diagnosis pancreatic cancer. Surgery once again and follow-up treatment, leaving me in a frail condition.

“As soon as I could, I resumed workouts with Bryant. Step by step, Bryant restored my energy, adding planks as well and push-ups to my regimen.” 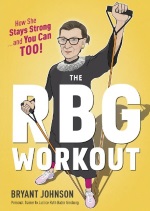 That quotation is from Justice Ginsburg's foreward to Bryant Johnson's just-published exercise book, The RBG Workout: How She Stays Strong and You Can Too!. As soon as I saw a preview a couple of months ago, I pre-ordered it and it arrived on Tuesday.

It's a how-to book of RBG's regular hour-long routine with Johnson including drawings and explanations so you can do it too - at a gym or the same exercises adapted for home. Here are a few of the drawings from the book as posted by ABC News:

What surprises and pleases me is how many of the individual RBG exercises are already in my own routine which I just returned to doing two weeks ago after my surgery recovery.

One difference is that RBG does real pushups while I do “girlie” ones on my knees instead of toes. The book convinced me that over time I can do that too and I started yesterday – not wildly successfully. I couldn't even lift myself up from the first pushup so I'll stick with my girlie version while I keep trying to do the real ones – one at a time if that's what it takes.

As Bryant Johnson explains in his introduction to the book, when Justice Ginsburg began working with him in 1999,

”...she couldn't have done the workout that is now her regular routine, but she was determined as all get-out, and we started building her regimen from scratch.

“Justice Ginsburg receives bone density scans every other year,” he continues. “After some years of twice-weekly workouts, her bone density began to increase. The result of this test became my report card for whether the exercises we did were effective or not.

“My efforts were confirmed by a majority decision when her doctor delivered this verdict: 'I'm not sure what you're doing, but keep doing it. It's working.'”

Here's a video from USAToday of Johnson showing some of RBG's workout at the gym.

Not every old person can do Justice Ginsburg's workout routine or even mine. We age at different rates, we get gobsmacked by unexpected diseases and conditions or, as was true for me five years ago when I began a home routine, we are just terribly out of shape.

Bryant Johnson's book is arranged to make it easy to choose the exercises you can do to begin with and then move on to harder ones as you build up your strength.

This routine was devised by a professional trainer especially for a certain old women but as he points out, it's good for any of us - men too. If you want to try it on your own, do talk with your physician first.

I totally recommend the Silver Sneakers Classic workout, which is offered in many gyms and YMCAs. What RBG does and more is included in the hour long class.

I'm pretty fit. But there is no way I could do full push ups. Bravo to the Justice!

I'd guess our mothers had Eleanor Roosevelt for inspiration, and we have RBG. Similar effects upon people of their eras, and I think for different reasons which likely reveals the times and culture when they have lived.

The two exercises I need most are push-ups off the couch and push-aways from dinner.

Thanks Ronni. I just ordered this book too. Made my own routine but don't think it's anywhere as good as this.

Oh Lord, you and Ruth are a pair! I'm inspired and intimidated..........all that pressure on my knees, really? PUSH ups? Even girlie pushups make my elbows hurt. But yeah, I could be doing better. Well, I'll start by ordering the book. You're something, Ronni, you were cut from whole cloth!

Yeah Ronnie. Yes, you are inspiring as is RG.

But please Ronnie, please don't say "girlie push-ups." We're working to support strong women of all ages. One of my 14 year-old granddaughters goes to Cross Fit and runs cross country track. The other 14 year-old is on the competitive dance team at her high school and believe me she and the other girls on her team are fit!

My daughter who is a yoga teacher promotes begin push-ups (plank)from our knees for protection of our backs. No "girlies" there either! Thanks. Marian

I am going to order the book. I usually get the Kindle version, but think I need the print one. Question.. which excerise bands are best? I want to order a set at same time.

If I told y’all my story I would probably get banded from TGB. My only exercise is sitting in a rocking chair.

So inspiring, Ronni! Even though I have regularly attended dance classes for many years (it's my heartfelt passion) I've been meaning to supplement that workout with weights. Thus, I've just signed up for a two-month series at our local Senior Center which offers guided weight room training classes for older adults. I would love to increase my bone density and transform some ubiquitous flab. Also, for my 74th birthday at the end of December I shall treat myself to finding and signing up with a personal trainer.
One of the many things I admire about you is that you were/are able to stick with an eating plan and physical fitness program on your own. That is truly awesome. Through long experience I've learned that does not work for me. Nor does working with a book no matter how well it is put together. I actually have to sign up, commit, pay for a specific program and then wonderful results often ensue. Otherwise, my good intentions just disappear into some etherland!
Vala Zen

I confess. I have no self discipline. I need a partner to challenge me. When I lived at my other house I walked 4 miles a day with a neighbor. Then I moved to my current house there was no one to walk with so I started out on my own. It was so dull because the streets where I had to walk had cookie cutter houses that were different only in their landscaping and after a year I was so bored that I had to force myself to go out the door. Then the excuses began. I overslept and it's too hot now. I don't feel like going out today. Soon I was no longer walking at all. It has been all downhill since then. A year ago Christmas when I was in rehab I liked using the machines; there were friendly people in the gym and I was gaining my strength back rapidly. Then I went home with an exercise program. It lasted about a month and the excuses began again. My "won't" power is much stronger than my "will" power, even though I fully recognize that it's self defeating.

I really admire you well-disciplined people who stick with a diet and an exercise routine. I am not one of you. Now I probably never will be even though I do not like being so weak that I can't get up from a low chair. I guess lack of motivation strong enough to keep me at it is my downfall.

Just visited a friend who led weekly 5 mile hikes here in the Calif. coastal city where I live...she is 83 but has had slow progressing dementia for about the past 4 years since I last saw her. She was in bed and appeared to be very thin and frail. Hard to believe she was so active for such a long time.

I was sad to see she is a shadow of her former self after suffering a fall and resulting broken hip and arm that has now healed. She has a full time care-giver at her home and she is easily able to afford it.

I consider myself lucky because I have HAD to walk often to keep me mentally stable or I get depressed. Antidepressants do not work well for me although I have taken them in the past, it has been many years since I tried them. When younger I took aerobics classes, and ran/walked in river beds, and county roads. Now I do yoga 2 X a week and walk 30 minutes several times a week in my neighborhood.

I do not need other people to walk with although I do walk with my husband on Sundays. He is a heavy exerciser in the best of health at 77. I pay for yoga classes as I have never been good at putting on a yoga video to do yoga at home. I never miss my yoga classes as I get so much good from participating for the hour class. Soon to be 78 I am in much better health than my poor mother who died at 83 of a massive stroke, and my younger sister who died of the same at the age of almost 73.

Thanks Ronni for the good information about RBG and her determination to keep her mental acuity and her body strong through exercising.

excellent and inspiring post. RBG is a wonder, what a shining example for women, esp older women. Well, all women. I have never done a workout and am pretty sure I wont begin. But I practiced yoga for 30 years. Unfortunately I cant do yoga now due to something organic rather than my physical exterior body which is still pretty flexible. Although I never could do push ups in my entire life.

However I walk. I have always believed I could walk my illnesses away. In a sort of metaphorical way of thinking. My 2.3 mile walk sometimes includes going up hills (to me they are mountains but not to a "normal" person). I spent 30 years walking walking on Cape Cod, primarily flat. So New Hampshire walks are a stretch for my body.

The book though is something I'd like to thumb through. Thanks.