Today is American Veteran's Day and I like this video that turned up about Captain Simtratpal Singh who is a West Point graduate, a war veteran, an active duty Army officer and a recipient of the Bronze Star.

He is also a Sikh, and successfully sued the U.S. Department of Defense in 2016 to be able to wear his beard and turban with his fatigues.

In the northern hemisphere of the world, the English-speaking part of it, there are two names for the current season of the year: autumn and fall. The other three seasons have only one name each. How did this happen?

”Fall was, in fact, the very last of the four seasons to become codified with a name, or even the designation as a season on par with the others,” explains Atlas Obscura.

“There are mentions of winter, summer, and spring in manuscripts dating back to the 12th century; the name of spring may not have been settled upon, but the idea that it was a full season came much earlier than with fall...

“The word 'autumn' has French roots; in modern French the word is automne. It certainly has Latin roots, coming from the word autumnus, which in turn comes from – somewhere...

“Autumn shows up in English first around the late 14th and early 15th centuries, though it coexisted with 'harvest' as a loose description of the season for another 200 years.

“Fall is different. It first shows up in the mid-16th century in England, primarily at first as “the fall of the leaf,” which was shortened to just “fall.” Like “harvest,” it is descriptive, but more evocative...”

There is much more detail about the naming of the seasons at Atlas Obscura and it's more interesting that you might think.

This is funny but also a practical solution for a beekeeper in rural Brazil.

Manuel Juraci Vieira needed a way to transport the honey he would collect from his beehives on his farm back to his home. His solution? His donkey, Boneco.

Outfitted in his very own homemade beekeeping suit, Boneco tags alongside Vieira, helping him carry the honey they gather during their hauls. Take a look:

A BRIEF HISTORY OF TIME

Yes, that is the title of a book by physicist Stephen Hawking from 1989, that was cosmic in scope. This, today, has the same name but a different goal, to explain how our system of telling time was created. As the YouTube page mentions,

”Why do we divide the day into 24 hours of 60 minutes each, and put 60 seconds in each minute? Where does the definition of a second come from? And who decides what clock shows the correct time?”

There is some more written information at Mental Floss.

AMERICANS ARE OFFICIALLY FREAKING OUT

Or, so says Bloomberg News:

”The 'current social divisiveness' in America was reported by 59 percent of those surveyed as a cause of their own malaise. When the APA surveyed Americans a year ago, 52 percent said they were stressed by the presidential campaign. Since then, anxieties have only grown.

“A majority of the more than 3,400 Americans polled, 59 percent, said 'they consider this to to be the lowest point in our nation’s history that they can remember.'

“That sentiment spanned generations, including those that lived through World War II, the Vietnam War, and the terrorist attacks of Sept. 11. (Some 30 percent of people polled cited terrorism as a source of concern, a number that’s likely to rise given the alleged terrorist attack in New York City on Tuesday.)”

Here's the chart of what Americans are most worried about: 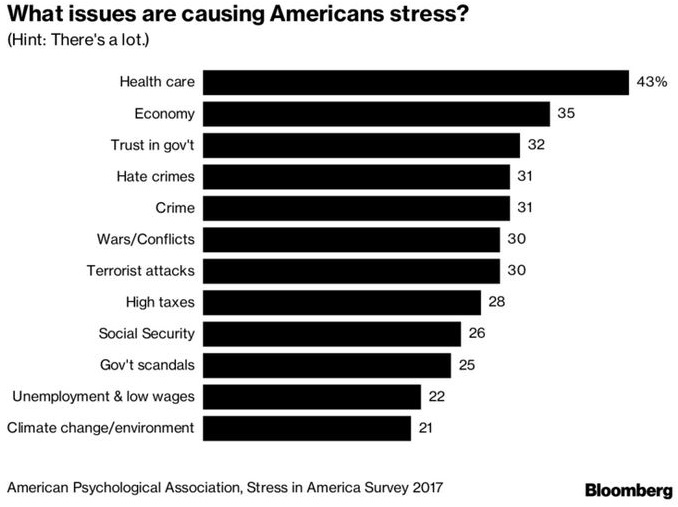 I'm personally disappointed that climate change is last on the list. You can read more at Bloomberg.

ARE YOU WASHING YOUR HANDS ALL WRONG?

Because chemotherapy compromises the immune system and makes the patient more susceptible to infection, I wash my hand these days a whole lot more frequently than in the past.

Sometimes I use medical gloves, as when I clean the cat's litter box but mostly I wash, wash, wash.

This video turned up from The New York Times a few days ago, originally published in 2016 about the best, safest way to wash our hands.

BRINGING BACK A RAIN FOREST

What was once 300 acres of coffee and cardamom fields in India’s Southern Ghats is now lush native forest, all thanks to the hard work and dedication of Pamela Gale Malhotra and her husband Anil, explains the YouTube page.

The couple started India’s first private wildlife sanctuary, SAI sanctuary, and for the past two decades they have been nursing the land back to life. Here’s how they did it. It's amazing.

SIMON'S CAT – OFF TO THE VET

Simon's Cat has been a YouTube staple for years now. Some, in my viewpoint, funny and sometimes not. This is new, a full-color, long (13-minutes) “Simon's Cat Special” crowdfunded at Indiegogo.

The YouTube page tells us that Simon’s Cat: Off to the Vet has screened at multiple film festivals around the world and was awarded The McLaren Award for Best British Animation at the Edinburgh International Film Festival 2016. Enjoy.

When we lived in Scotland, I was talking with my neighbors--a woman and her teenage daughters. I used the word "fall" and the daughters didn't know what I meant. The mother explained that they only use the word "autumn" in the British Isles.

I tend to use "fall" most of the time because it's shorter. But "autumn" is such a lovely word. I try to give it its due. Either way, it's always been my favorite season.

I got really diligent with hand washing when I was undergoing chemo, but I have for some years made a point of it, especially during flu season. My biggest exposure to illnesses is at the grocery store, where I'm diligent about not touching my face. Then I always wash my hands when I get home.

Re the donkey section, it gives new usage for the term, "What an ass!," rather than the 2 other most well known utterances.

Admire and thank the couple for their rainforestation efforts and success. They're inspiring, and I'd like doing their sort of work with its high personal payoff.

I'm a skeptic of polls, seeing them at best to be an indication (by algorithm?). They're difficult to accept without knowing the details, such as the actual questions and how they're framed. Reading of this one in particular, however, it was interesting that 51% said the "state of nation has inspired them to volunteer or support causes they value." Great! That leaves 49% who need to...get off their asses.

I also wish environmental concerns was a larger concern, but many perhaps don't view it as a major personal "threat," causing stress, especially if rated against the others listed. I believe it is, and question the extent of climate change damage and dire future threats to health, livelihood and peace of mind for basics like air and water is relayed and received by the public.

The video on washing your hands reminded me of two things. First, my ex son-in-law was the VP of the Black Angus chain of restaurants and it was mandatory that the employees wash their hands just that way. He taught me now to do it. The video omitted one important step though and that is to also clean under your fingernails.

Second it brought back a memory from one of the Seinfeld skits when Jerry was dating a girl whose father owned a restaurant and the father had gone to great pains to cook a special meal for Jerry. Jerry was in the bathroom washing his hands when the father came in and went into a stall to do the obvious thing and came out and left without washing his hands. The horrified look on Jerry's face was priceless and he refused to eat the meal.

I am so happy that someone is bringing back a rain forest as the destruction of them has been just terrible.

Anyone who has a cat in residence can identify with poor Simon.

I agree with Susan R. that autumn is a lovely word and I usually refer to fall as autumn because it's very poetic.

Delightful as usual.
Thanks.

@Darlene, is there a scenario with no Seinfeld reference? Yes, but nonetheless dozens+
are fittingly relevant.

At home, we've all watched the episodes enough times to nearly lip-synch and often end up laughing hard, with tears streaming down our crunched-up faces.

Good reading and good inspiration along with good giggles with Simon today .
I do look forward to your Saturday column.

Thank you! I look forward to Interesting Stuff.I learn something new every week.

How fitting that on the day of Ronni's posting our family (Hunky Husband, me, Elder Daughter, Grand-daughter, Grand-daughter's wife, and two Great-Grandsons) were served brunch by a young woman named Autumn. She wasn't as colorful as Autumn leaves, but was an unobtrusively efficient server.

what kind of crazy stress list is that which does not even mention hilary's emails? i am told by reliable righties that this will be the downfall of western civilization.