How odd that in the past couple of weeks, we discussed Ursula K. Le Guin's most recent book of essays. Her family announced this week that she died at home in Portland, Oregon, on Tuesday, 22 January: 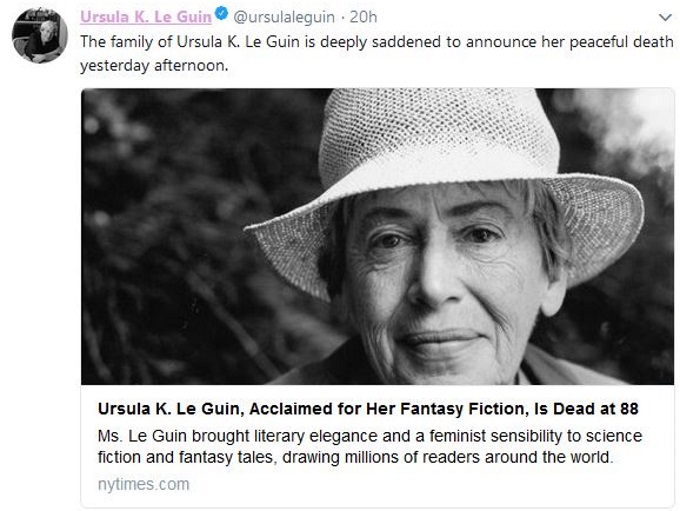 Her son said she had been in poor health in recent months.

Margaret Atwood, author of The Handmaid's Tale, had this to say in her farewell to Ms. Le Guin at The Guardian:

”Right before she died, I was reading her new book, No Time to Spare, a collection of trenchant, funny, lyrical essays about everything from cats to the nature of belief, to the overuse of the word 'fuck', to the fact that old age is indeed for sissies...”

And in this following excerpt, she convinced me that my next big read will be Le Guin's The Earthsea Trilogy:

”But political thought and activity was just one facet of this astonishingly talented woman’s multifaceted life and work. The Earthsea trilogy, for instance, is a memorable exploration of the relationship between life and death: without the darkness, no light; and mortality allows all that is alive to be.

“The darkness includes the hidden and less pleasant sides of our selves – our fears, our pride, our envy. Ged, its hero, must face his shadow self before it devours him. Only then will he become whole. In the process, he must contend with the wisdom of dragons: ambiguous and not our wisdom, but wisdom nonetheless.”

A documentary film titled Worlds of Ursula K. Le Guin will be released this year. You can find out more about it at Le Guin's website.

In the time since I discovered there is such a thing several years ago, I've been fascinated with ice hotels that spring up in various places around the world when winter arrives and melt away in spring.

Here's a video about the original ice hotel in Sweden:

You can find out how the ice hotel rooms are cleaned at Mental Floss and visit the hotel's website here.

That's right 172 billion dollars with a B. Here are the key findings about this kind of cybercrime, according to the 2017 Norton Cyber Security Insights Report [pdf],

• 978 million people in 20 countries were affected by cybercrime in 2017. The most common cybercrimes experienced by consumers or someone they know include:

Fortunately for us this is more than just a survey. On page 9 of the report, you'll find good advice on how to prevent it.

IS COFFEE A HEALTH RISK OR IS IT GOOD FOR US

Every few years, “they” tell us that certain common foods are not good for us. Salt, of course, many fats, red meat and so on. Coffee comes up on that list now and then and I've never paid attention.

In this video, recorded in 2015, Dr. Aaron Carroll affirms research showing that drinking five cups of coffee a day is associated with a lower risk of disease, compared to drinking none.

I don't go quite as far as five cups a day, but I do like having my biases confirmed:

I've never had any trouble appreciating squirrels but these reasons are new to me. 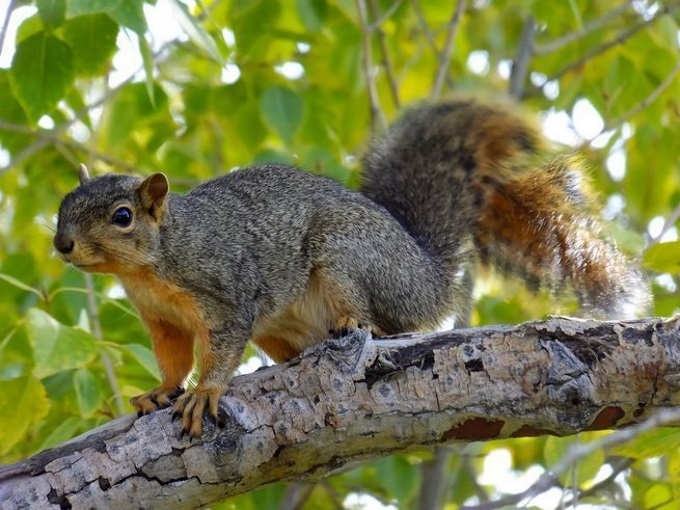 ”They are Very Organized: A recent study found that eastern fox squirrels living on UC Berkeley's campus cache their nuts according to type. When given a mixture of walnuts, pecans, almonds, and hazelnuts, the squirrels took the time to hide each type of nut in a specific place.

“Their Forgetfulness Helps Trees Grow: Though they may be careful about where they bury their acorns and other nuts, they still forget about quite a few of their caches (or at least neglect to retrieve them). When they do, those acorns often sprout, resulting in more trees.

“They Can Lie: Gray squirrels know how to deceive. They can engage in what's called "tactical deception...When they think they're being watched by someone looking to pilfer their cache of food...they will pretend to dig a hole as if burying their acorn or nut, but tuck their snack into their mouth and go bury it elsewhere.”

You can read about the other 12 reasons to appreciate squirrels at Mental Floss.

BEST, FUNNIEST AND MOST POWERFUL SIGNS AT WOMEN'S MARCHES

Well, certainly not all all the signs – it was a big, big march in every U.S. state and many other countries as well last weekend. Here are a few samples: 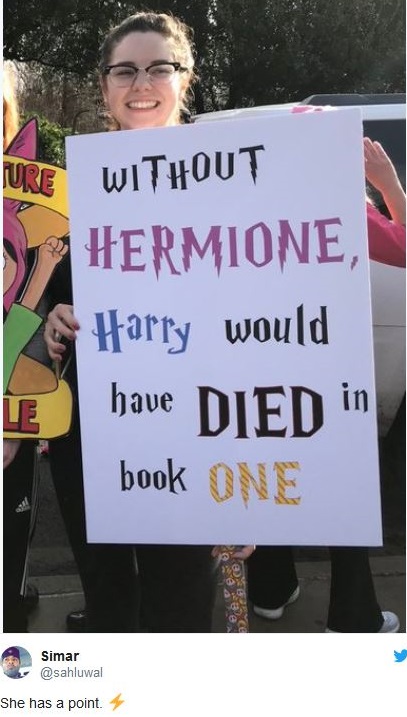 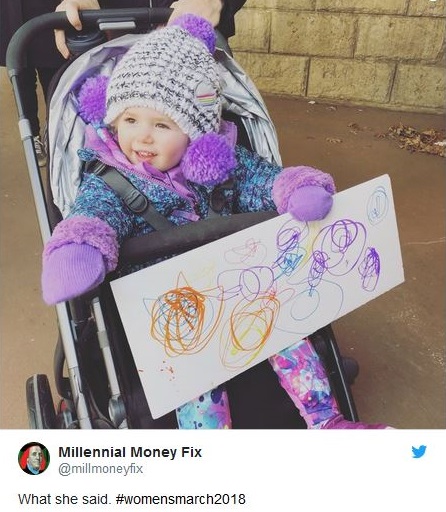 You will find more at Raw Story.

Who knew you could make a living at something like this. Obviously Michael Schneider does but his facial expressions seem to say that he's as surprised as I am at the success of such a silly thing:

Some states are suing the federal government to restore net neutrality rules that were rescinded by the Trump administration in December 2017.

Taking a more immediate step is Montana Governor Steve Bullock who signed an executive order requiring internet service providers to accept net neutrality rules for contracts with the state. Take a look at a local news report about it:

INGO THE DOG AND HIS OWL FRIENDS

Thank reader Kathleen Noble for these astonishing photos of a German shepherd hanging out with his tiny (compared to him) owl friends. Images are by animal photographer Tanja Brandt: 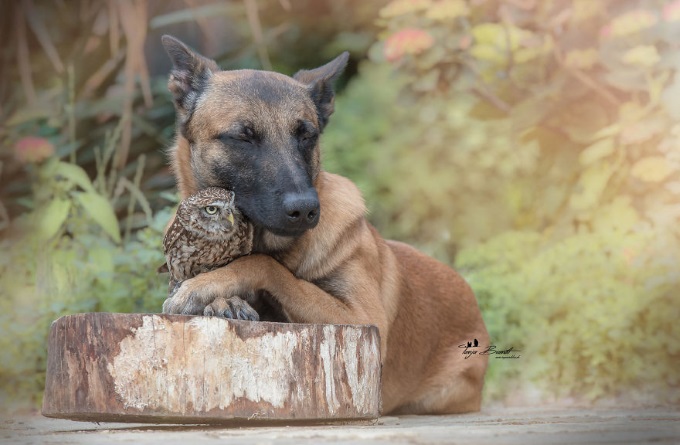 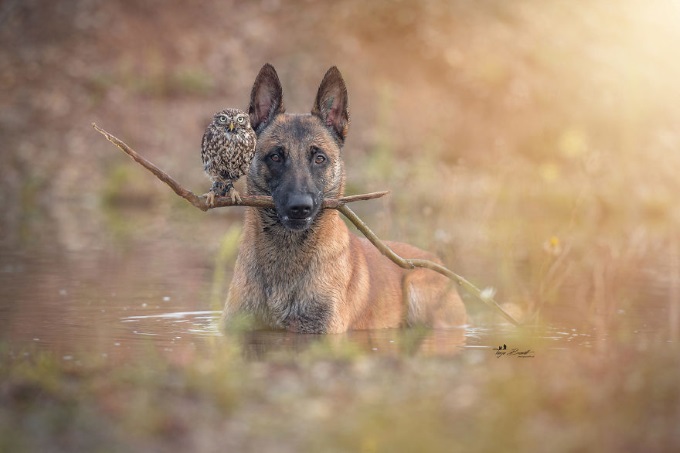 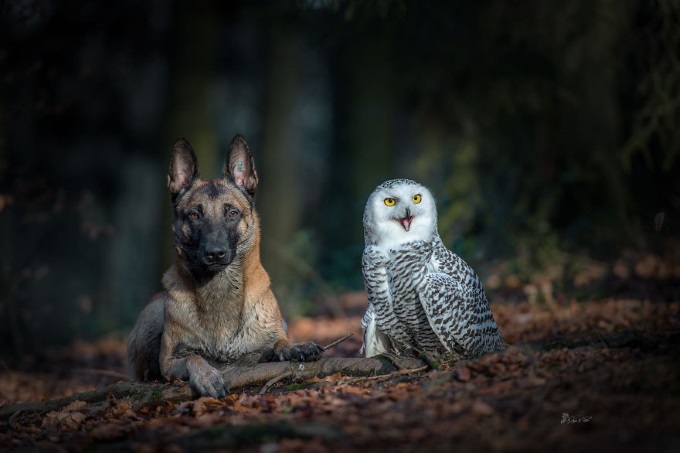 A lot more of Ms. Brandt's photos of Ingo and his owl buddies at Bored Panda.

The ice hotels have always fascinated me. This from the woman who now wears leg warmers. lol

I guess finger boarding is harmless entertainment. Nothing I'd go watch. :-)

Finger boards? Who'd a thunk it?

Never much of a sci-fi fan, I did read and enjoy Le Guin's "The Left Hand of Darkness" this past year, an interesting take on gender and its effects on culture.

And speaking of gender...I attended the Women's March here in NYC this year. There were some good signs. Among my favorites were copies of activist Tania Katan's "It Was Never A Dress" (you can google it), which shows an alternate view of that triangle dress-like silhouette with which we are all familiar as the sign of a women's bathroom. Her take -- it was never a dress, it's a woman wearing a cape. I love it! In the same vein, I also saw a little kid holding a sign that said, "I'm a girl. What's your superpower?"

I don't think I've ever said so, but I always enjoy your Saturday offerings, Ronni. Many thanks!

I love the German Shepherd and owl shots, especially the top one.

So pleased to see our Montana governor and award-winning local newscaster in your picks today! Interesting fact to know and tell: Montana is a red state, but our governor and one (of only two) state senators are democrats. I'll take hope where I can find it.

I'm resistant to fantasy novels but recently saw Earthsea Trilogy at a thrift shop and bought it, read it for the first time. I was happily surprised at the depth of philosophy behind the story -- which was a page turner at all times. I don't know if this was her best, but I will look for other books she wrote.

I was never much into fantasy or sci-fi when I was younger, and never read either Le Guin or Madeleine L'Engle. Intrigued by the upcoming movie of "A Wrinkle in Time", I picked up a second-hand large print copy of that book last week for a quarter. I believe I will also delve into Le Guin's Earthsea Trilogy soon, along with others here. Earlier this week, Fresh Air with Terri Gross, just this week replayed a wonderful interview she did with Le Guin many years ago. It was appended to another interesting interview with NY Times writer, John Leland, who has just come out with a book about his studies of the past few years on the "oldest old." Anyone here who hasn't heard these interviews might enjoy both very much.

We have some squirrels in our neighborhood that have become so used to being fed by us, that they come to the door when they hear it open, or see our car return. We feed them commercial squirrel food and roasted peanuts in the shell, along with an occasional filbert, which may be their all-time favorites. Fortunately, the local grocery always seems to have bags and bags of unsold filberts in the shell after the holidays and sells them at half-price. I stock up and may now be the local squirrels' goddess.

As always, a delightful mix of Interesting Stuff today.

Sad to know Ursula Le Guin has died. Still, she has left us one heck of a legacy.
These original thinkers don't come along very often so we cherish them when they do.

I enjoyed reading about the stain remover techniques in the Ice Hotel - just scrape it off and throw some more snow on the surface! The whole ice hotel concept is interesting, but I'm glad it's several thousand miles away. Brrrrrrrrr.

Oh SKATEBOADS.....only on fingers. Took me awhile to figure that out.

Always look forward to Saturday's offerings. The owl and the puppy dog made my day.