A KID'S DESCRIPTION OF OLD PEOPLE

“My mother, who was quite 'wrinkled' would often remind me to 'use moisturizer,'” wrote Marian. “I too have 'fragile' skin and 'wrinkled' early - whatever that means.

“When one of my grandsons was about 6, gently stroking my face, he asked me, 'do all grannies have ruffles?' So of course my friends and I all love our ruffles!”

No one is born with ageist beliefs – they have to be carefully taught.

ABOUT THAT STORM IN THE EAST THIS WEEK

It was a mess in New York, Boston and other cities where temperatures hit terrible and dangerous lows but what some were calling the “bomb cyclone” storm left only one little inch of snow in Washington, D.C.

The headline on that story by reporter Monica Hesse in the Washington Post read,

”Dear Northerners: We get that this weather is no big deal for you. Now please shut up.”

Hah! Great verbal jab. Read on at The Post.

Another weather item: With record-setting cold temperatures this week, here's a nice, old comedy routine about how Canadians cope with it that TGB's Montreal reader, doctafil sent:

DOGS PLAYING IN THE SNOW

Okay, maybe I'm overdoing winter weather today but there was a whole bunch of good stuff this week.

This is a short compilation video of dogs having the best ol' time in the snow. Like me, you might recognize some of them – at least one clip hales from 2007 – but it's great fun to see dogs enjoying themelves like this. (Don't forget, nothing ever dies on the internet.)

THE STORY OF A 107-YEAR-OLD WORLD WAR HERO

On Thursday, Georges Loinger turned 107 years old. He is a World War II hero, a French resistance fighter who helped save thousands of Jewish children from the the Nazis. Here is a small part of his story.

”...Loinger was born in Strasbourg in 1910 to an Orthodox Jewish family. In an interview published in the French Jewish newspaper Tribune Juive in 2015, he says, 'I was born a German. Mein Kampf was sold in bookstores. On the radio, we heard the speech of Hitler, who was yelling: “The Jews. I will exterminate them.’”

“In 1939, Loinger was mobilized and fought with the French army. When Germany defeated France in June 1940, his unit was captured and sent to a prisoner-of-war camp in Germany. Because he was tall, blond and blue-eyed, the Germans did not suspect he was Jewish. He managed to escape, return to France and join the OSE as a resistant. By then he was married with two children of his own...”

After the war entered France, it became too dangerous for Jewish children to remain in France so Loinger and his cohorts began hiding the kids with Catholic French families:

“'This is how their lives were saved. After that, the Italians left France and the Germans came in. It became too dangerous to play ball with the children like this. With the Germans, we didn’t play these games,' he said.

“In this candid and modest narration and others, Loinger explained how he saved many children until September 1943, when the Italians signed an agreement with France and left the country.”

There is much more to the story of Georges Loinger's bravery at Tablet magazine.

There are some amazing shoes in this museum in Toronto, Canada, which holds a collection of footwear going back, says the curator, 4,000 years. Here is a video of more recent vintage shoes.

I was disappointed that I couldn't find a video of some of the ancient shoes but here's a photo of sixteenth-century Italian “chopines.” 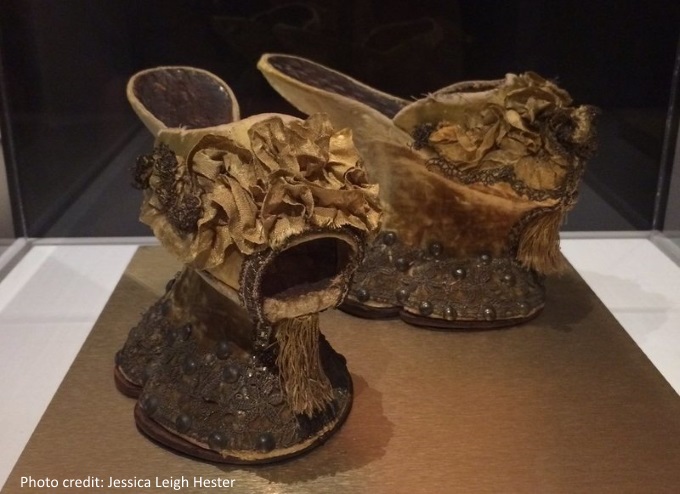 You can read more about the museum at Atlas Obscura.

No kidding. You should see this wrinkled old body with its two foot vertical scar down my middle. Well, never mind. I didn't mean I would show you.

This is the Snake Oil Willie Band from 2014 singing about that predicament.

LONGEST TOWN NAME IN THE WORLD

At 58 letters, Llanfairpwllgwyngyllgogerychwyrndrobwyllllantysiliogogogoch is the longest town name in all of Europe. The Youtube page tells us that

”...in the 1860s, the name was developed as a way to entice tourists to make the town a stop on their travels. It's an amalgamation of the Welsh words and names for local landmarks, and it's probably the best PR stunt of the 1860s—or today.

Here are the locals pronouncing the name for us:

This is from TGB reader SuzC who said,

“I'm attaching an entertaining webcam of 2 baby bald eagles, whose fierceness, strength and struggles seem to fit our day these days...“

The video is posted on the Dick Pritchett Real Estate website which explains that this 2017-2018 season is the sixth time the real estate company has provided the live look into this Southwest Florida nest. Three cameras are used that track the birds 24/7 and stream live video directly to this site.

There is more about the eagle cam and its birds at Dick Pritchett Real Estate.

Ruffles. I must remember that. So cute! And the dog video made my day.

I nearly passed up the video of "I Don't Look Good Naked, Anymore". I'm glad I didn't. Thanks, Ronni, for another Saturday roundup.

Great postings today! You made me laugh - thanks! Happy New Year, Ronni.

The dogs in snow, the Canadian couple, and the folks who don't look naked - the most I've laughed all week. I love your Saturday postings. Thank you.

P. S. I meant to say " don't look Good naked anymore." I was laughing too hard to check my work.

Today's "Interesting Stuff" was much fun. Many thanks.

It triggered a memory of many years ago when a very young granddaughter and I sat together looking at a picture book. She thoughtfully stroked her own arm and remarked that her skin was soft. Then she checked my arm and said the words I remember so well : Grandma, your skin is SHAGGY, LIKE AN ELEPHANT'S.

What is this "snow" of which you speak? I don't understand the concept.
Yesterday, here in Melbourne, it was 42 degrees which some Americans in the north-east might think of as balmy. At least until they were informed that, as the only Celcius-challenged country on the planet (except for Liberia), it means that it was 108.

I'm late to the party today, because I've been engrossed in a 'hot' new book that came out yesterday.
Taking a break from that tome, I was delighted to laugh out loud more than once at the weather stories (lets hear it for sometimes sunny San Francisco) and those dog antics.
I do always look forward to your Saturday fun posts, Ronni.

Great selections once again. I got engrossed with the eagle cam. Kept waiting for the end of the video and finally realized it was, indeed, live. Meanwhile one chick bullied the other who then didn't get fed. Mom Nature at work. Rough to watch. Guess I'll pop back to the dogs in the snow to cheer up!

Thanks, Ronni and helpers.