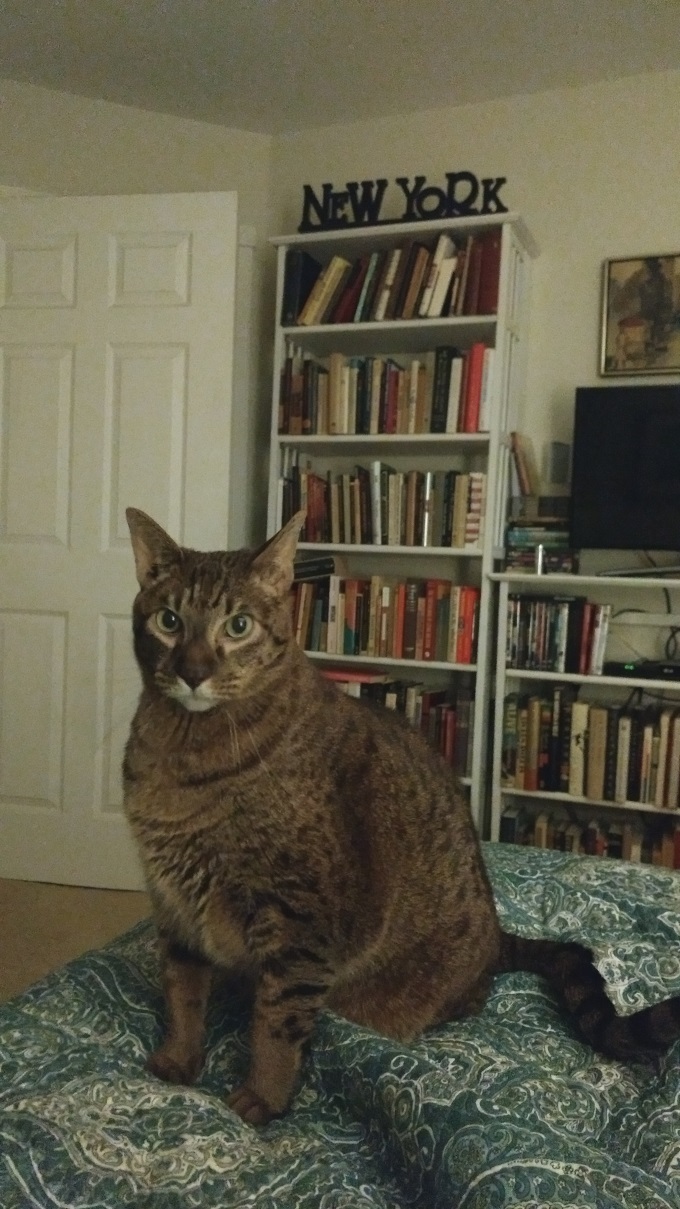 That's Ollie the cat in the bedroom late last year, healthy if a bit too fat. A few months ago, he got sick, made it obvious over time that he no longer liked his regular food and nothing else we tried was satisfactory to him. He'd have a few bites and walk away.

There had been no definitive diagnosis and even with the veterinarian's best efforts, Ollie continued to lose weight until his bones were sticking out. Last Thursday morning, he took up residence in a dark and comfy cupboard hidy-hole in the dining room – a place he otherwise had never shown the slightest interest.

I lasted there a couple of hours before returning to bed but as far as I could tell in the morning, Ollie didn't mind my having been in another room overnight.

He also didn't mind when I pet him but he didn't really care either – no purring and only the slightest acknowledgement of my touch.

His once bright green eyes had become dull and so on Saturday, another veterinarian from an organization called Compassionate Care came to our home so that Ollie's departure into the great kitty unknown could be done in peaceful, comfortable and familiar surroundings.

Our home feels so empty now and I am so deeply sad.

Here is Ollie in our New York City home early in 2005, when he was six months old. 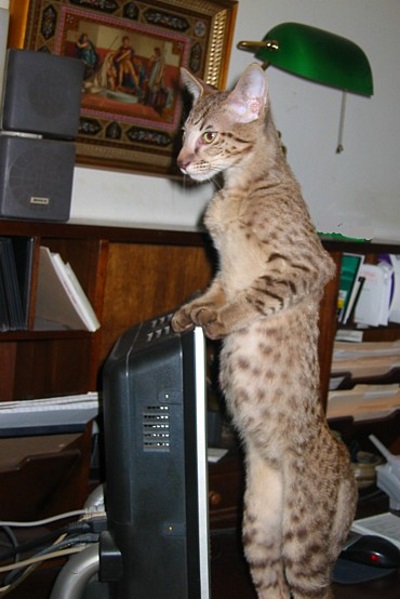 In those early days, we jockeyed for position over whose living requirements would prevail. Sometimes I won, sometimes he did but overall we accomodated our preferences fairly well, if you don't count his biting my ankle if I didn't prepare a meal fast enough.

This is Ollie in 2010 helping with the packing to move from Maine to Oregon. 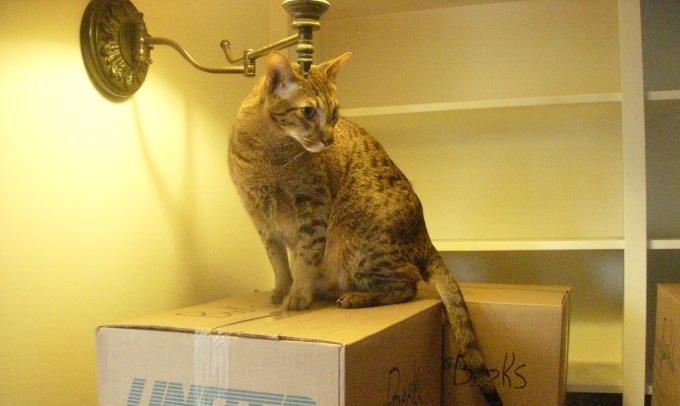 And here he is four years ago checking out the front patio/porch where local cats and the occasional squirrel sometimes show up. 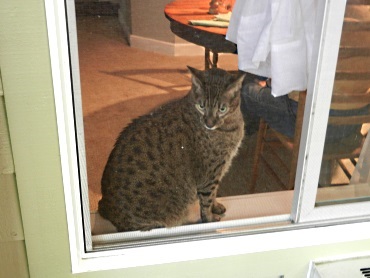 Ollie was a Savannah cat, a relatively new hybrid breed, a cross between a domestic cat and African serval. Ollie was one-sixth serval with the gorgeous coat similar to a leopard's.

I don't know if it is typical of Savannah cats, but what anyone who ever met him commented on was his direct, almost human-like gaze into a person's eyes. In the beginning it was unsettling how he looked at me with such intensity. It didn't take long to get used to it and and I loved that connection between us every day of our life together.

Here is a photo that almost catches that feeling: Many, many years ago, my then-father-in-law told me about how, on weekends, he and his wife might not bump into one another between breakfast and dinner as they went about their pursuits. But what was important is that they each knew there was another heartbeat in the house.

And so it was with Ollie and me but now, that other heartbeat is gone and it feels so empty here today.

As undoubtedly is true for you, I've been through this grief before with people and with beloved animals. I know that – as has already happened once – for awhile I will think I see Ollie out of the corner of my eye as he trots by. But that's just a mirage, right?

And someday I will be able to remember Ollie without weeping. But not yet. He always made me feel that to him, I was the cat's meow. To me, he was my best buddy for 14 years.

I'll leave you with a link to one of my all-time favorite blog posts that long-time readers will probably recall: the adventure of Ollie's disappearance from our second-story deck in Portland, Maine, in 2007. I titled it How Ollie the Cat Lost His Outdoor Privileges, a heart-pounding, scary tale with a lot of photographs and, at the end, my revenge.

Farewell my Ollie. You gave me so much joy. I will always love you. 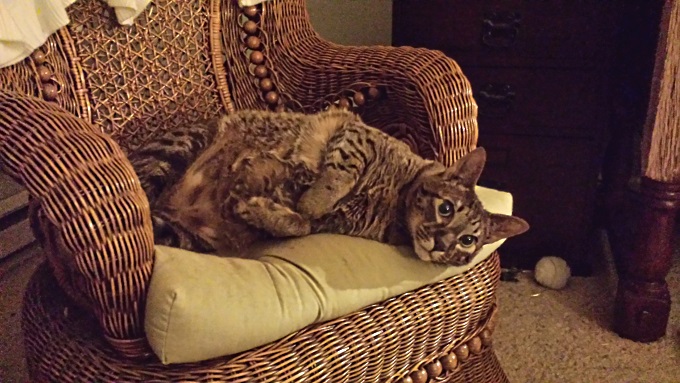 So sorry for your loss!our pets are are such a part of us!

How fortunate to have loved and been loved so well by Ollie.

" Farewell my Ollie. You gave me so much joy. I will always love you."

And there it is, the perfect summation of a profound soul friendship. I could read that line a hundred times and it would still bring me to tears for everything it says and everything it doesn't need to say.

Oh Ronni, I'm so sorry your Ollie has left you (for now anyway). What a magnificent cat. That face. Those eyes.

A number of years ago, one of my cats (a big black Himalayan/Persian with brilliant orange eyes), had a gaze like Ollie's, that looked straight into your soul. I felt that he knew everything and that nothing needed to be explained. And that's the thing with cats, isn't it, It's such a direct relationship. No pretense, no ego-interference, just the two of you accepting and understanding each other as you are.

Thank you for sharing so generously and eloquently (as you always do) the life of your beautiful Ollie. it's comforting and sort of humbling somehow to read all these lovely comments and realize how many others here have broken their hearts on the altar of love for their pets. I used to think I was the only one who totally lost it and grieved for months and sometimes even years, over a pet's death. Clearly that's not true. Thanks once again for being the means by which we understand that we're all in this together.

Here's a cat story, in case it might help a tiny bit. On the sad day that my 14 year old German Shepherd, Rachel, died in our apartment (she had heart failure and had been sick for quite awhile), we huddled around her, crying of course, as she slipped away. After she died, I looked up and there was Indiana the soulful Himalayan Cat, not looking at us, but instead staring intensely up at a corner of the ceiling with his big eyes twice their normal size. He kept his eyes glued to the ceiling as he lowered himself to a crouching position on the floor. I looked where he was looking, but there was nothing there. Then, still crouched and finally cowering to the floor, he slunk under the sofa and stayed there. I couldn't get him to come out for hours, which was completely out of character for him.

We were baffled, but finally concluded that he was seeing his dog friend's spirit as it drifted upwards to the ceiling (which is a description of out-of-body consciousness I've often heard from those who've had near-death experiences), and he had no idea what to do about it. Since that day, I've always felt that cats, and maybe animals in general, know far more than I do about the important things, like death. And I agree with those commenters who say that probably you're seeing Ollie trotting by because he's still there with you.

Farewell magnificent Ollie. You have loved and been much loved in return. And that's as perfect as it gets in this world.

Dear Ronnie,
What a magnificent tribute to a magnificent companion.
The second photo of Ollie where she is standing over the computer reminds me of the statuesque Meer cats.
I am also a cat lover. Recently I had an experience unlike any other with a cat who maintained a fierce eye contact with me until I shared my supper with her. If I could have scooped her up and taken her home with me, I would have.
To have had fourteen years of such a relationship where the two of you really "got" each other, is a beautiful thing, and so painful to lose.
I'm glad you had her companionship, I'm sorry for your loss,
hugs,
Lynn

Ronni, you and your cats gave me one of the greatest nights of my life - you let me sleep over on your couch and ALL FIVE of those darlings slept with me! I'm so sorry about Ollie. It's a hard pain to bear. But I also remember the toilet-training of your Abyssinian. He was hilarious. So here's to Shabbos, Yontiff, Bert. Charlie, Mouse and now we add Beloved Ollie Cat. Ave atque vale.

So sorry for your loss Ronni. Those of us who have said goodbye to beloved pets over the years know how profound the loss can be. A friend once said that the only problem with dogs and cats is that they don't live long enough. Take good care of yourself.

Ronni, I'm sorry to learn about Ollie. When we had to euthanize our Doris a few years ago (by a vet who did house calls), a neighborhood cat attended her brief memorial service in our front yard and then adopted us. Cali the calico cat has become a member of our family. Thinking of you always.

Ronni, I have been wondering about Ollie as I tend to my 18 year old Marshmallow, domestic long hair all white, getting creaky but so, so relational--our family's grandpa. He can still shoot out a front paw in a heartbeat to whack our Welsh terrier on her head when she gets too bouncy and then I find them curled up together in a sunny nook.

Have you read THE GUEST CAT by poet Takashi Hiraide? Should the mood strike-- a way of channeling a wisp of your own life-road feline.

Ronni, so sorry for your loss. I lost my Zoe on Valentine's day this year the same way. She was 18. Please know that we love you and are thinking of you.