She lives in Sweden. She's 106 years old. She didn't get her first computer until she was 100 years old. Her blog name is Bojan; her real name is Dagny Carlsson:

NOTE: Since I originally posted this video, it has been removed from embedding. You can watch it here.

Her blog is called Blogga Med Mig (Blog With Me) and you can see it here. (Thank TGB reader Joared for sending this item.)

You must have seen this by now but it's too good to ignore. A 22-year-old immigrant from Ghana, Mamoudou Gassama, didn't hesitate to risk his own life to save this little boy hanging from a high balcony in Paris.

What an inspiration Gassama is and a rebuke to anyone who would close our borders to all immigrants. He has been hailed as a hero worldwide, met with French president Emmanuel Macron who offered him citizenship and has accepted a 10-month internship with the French fire brigade. Read more at the Daily Mail.

A year or more ago, when my personal information was caught up in one of the massive data breaches that happen so frequently these days, I froze my credit report at all three of the major credit reporting agencies – Equifax, Experian and TransUniion.

That meant no one (except companies with which I already do business) could see my reports unless I lifted the freeze. Here's the catch: it cost me $10 at each agency to freeze those reports and there would be additional fees to unfreeze them if I was applying for a loan, credit card or other transaction that needs a credit report.

I was fairly pissed off since it's not my fault those three agencies can't or won't keep their electronic files safe from thieves.

But now, Congress has done us this small favor: Tucked in that awful bill reversing many Dodd-Frank banking provisions put in place after the 2008 crash, is a requirement that there be no fee for credit freezes.

”By Sept. 21,” reports the Washington Post, “everyone will be able to place and remove a 'security freeze' on their credit files for free.

“Such a freeze — also called a 'credit freeze' — blocks lenders from pulling your credit reports. It’s a powerful tool to thwart identity thieves from using your financial information to open credit cards or take out loans.”

There are more details at the Washington Post story.

IS THERE ANYTHING YOU CAN DO TO AFFECT CLIMATE CHANGE?

The effects of climate change are awful for the future of mankind and for the planet in general, and it seems impossible that anything a single individual, like you or me, can do could change anything. But maybe not.

Just because you and I can't make a large difference in carbon emissions doesn't mean we each should not do what we can. There is more information especially about the effect of plastic on planet Earth in the latest issue of National Geographic and at the magazine's website.

NEW MEDICARE CARD IS ON ITS WAY TO ME

A couple of days ago, I got this email: Yes. Medicare is sending the new Medicare cards to my state, Oregon, this month along with California, Alaska, Pennsylvania, Virginia, West Virginia and some U.S. territories. Here is the map the email directed me to: 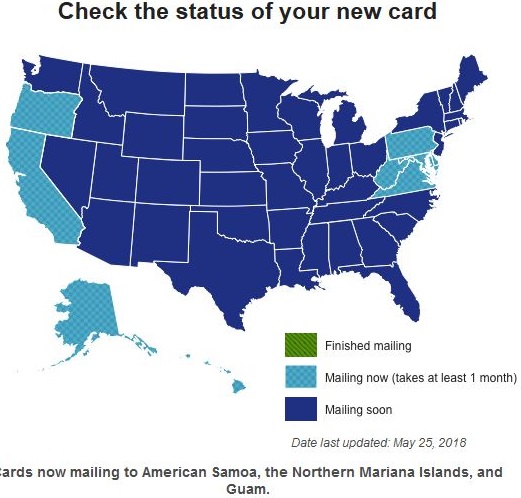 So sometime this month I'll have that new card. If you are signed up for MyMedicare, you too can receive an email to let you know when cards are being shipped to your state. Or sign up here.

This is fun – everyday phrases that started with William Shakespeare or were used in his era.

Geez, he even invented the knock-knock joke?

Kill with kindness – The Taming of the Shrew, Act IV, Scene 1
"This is a way to kill a wife with kindness, and thus I'll curb her mad and headstrong humor." — Petruchio

Mental Floss has 18 more familiar phrases most of us don't know are from Shakespeare.

If you love baseball and dogs then you’ll appreciate the work that Jake the Diamond Dog does at minor league baseball games. Jake has been trained to retrieve the bats as well as to deliver water to players and referees on hot summer days.

Congrats to Bojan! And I agree ... "Just because you and I can't make a large difference in carbon emissions doesn't mean we each should not do what we can."

Thank you Ronni for your fine effort for a Saturday morning. I so look forward to TGB in the mornings now that I have found it, words don't quite do my thoughts justice...So I'll just double down with THANK YOU !! again.

Re: "UNDOCUMENTED IMMIGRANT SAVES LITTLE BOY" Yes, I had already seen and shared this story, yet watched it again and tears came again. There is courage and a strength hidden in us all. It is so life affirming and uplifting to me when we see it demonstrated with such a great shareable result. The interview with French president Emmanuel Macron was quite endearing also.

...and finally...agreeing with Tom. Even at 80 and house bound, the smallest efforts add up eventually. We do what we can. A single dripping faucet does fill a bucket sooner or later.

I am glad to read that credit card freezes and unfreezes will now be free. I too have frozen my credit and in my State had to pay the fee. There are States that don't charge but now we will all be united at least on this one issue. Hallelujah!

The post about the oldest blogger was inspiring as well as the video of the Grandfather's Memory Book.

I worked in a library before retiring and we had a couple of programs for people to learn how to create a memoir. It was a very popular program and it seems many older patrons were very interested in leaving their legacy behind. I love the way that Colin's grandfather also attached simple drawings to his postings. What a great gift to leave behind.

Being a dog lover, the video about the "bat dog" brought a big smile to my face. We all need some sweet stories to lighten up our day. This is one that did that for me today.

As to the hero from Mali: more power to him. And I am delighted that Macron is not Trump: i.e., he grants citizenship to Mamoudou Gassama as well as an apprenticeship.

Although I have read this story several times [including in this morning's local edition of the Minneapolis Star Tribune], I am caught up every time by the mostly uncommented-upon words of Macron: "'When they [refugees] are in danger, we give asylum, but not for economic reasons. But in your case, you did something exceptional.'" So far, I agree [although those "economic reasons" are subject to much skepticism--they are usually considered an inadequate reason, thereby creating a terrible situation in which Gassama, for example, under less "exceptional" reasons, could have been sent back to one of the very poorest countries in the world.].

Back to that "exceptional": Macron continues: "'... an exceptional act does not make a policy.'" In other words, what is clearly implied is the statement that most of you [refugees] will have to climb up a wall or something else equally drastic in order to gain citizenship [which, as we all know, does not mean acceptance anyway, just a temporary notoriety].

In this hideous time, when I find myself weeping almost every day as yet another article or news clip about our - our! - evil separation of children from their parents, even those who entered the country according to the conditions of the law concerning refugees --- Macron's middle-of-the-road position seems at the very least suspect, not to mention morally corrupt. And basically cynical.

Great collection this morning. Bojan and Grandfather's Memory Book are wonderful and I've forwarded the links to several people. The gun rally video is hilarious, even though it paints a pretty goofy picture of the state I live in. Sigh... We're not all whackadoodle, honest.

I once read that if you don't know the source of a quote, the Bible or Shakespeare are your best guesses. But "knock, knock"?

Loved the videos. But I'll admit to being anti-gun (mostly) and pro Golden Retriever. There have been several Goldens in my family and my current rescue is half Golden. Wonderful dogs. And Jake is a delight!

So glad the government is wising up about making SS numbers more secure. Back when I first started driving in Oklahoma, they even used your SS number on your driver's license!

Everything is great today. The memory book and grandpa caught my attention. Simply marvelous.

Just a comment re the credit freeze, when they say "except companies with which I already do business," that's not exactly true. It should be the current accounts you have with those companies.

I had a credit card with one of the large banks, and wanted a second card, which gave me better benefits for what i was planning. I, too, thought that would be easy since I was already doing business with them, but someone from the bank called asking me to let them have access to my credit account (yes, I was sure it was actually the bank!). I was able to do it while I was on the phone with the woman, and set it up to freeze it again a day later.

Grandfather's memory had me hitting myself on the head wondering why I hadn't done that. Instead of jotting down a memory when I thought of it I sat down one day to write my memoirs and kept going until I could not think of anything to add. Foolishly, I did not keep them in the computer. Now, if I start jotting down things (sans the illustrations) as they pop into my mind, I may or may not be repeating myself. I would bore anybody to joining me in death if they read it all.

Nonetheless, I think I will find a blank book and start writing. That is, I will write if I still remember how to write cursively. And if I can manage to write legibly.

The pro gun rally really illustrates how the gun lobbies talking points have indoctrinated the gullible loons who never think through what they are spouting. Facts be damned - full speed ahead.

Bojan makes me ashamed that I gave up my blog so easily.

My new Medicare card reached San Francisco yesterday. Thanks to you, I knew what it was. :-)

I froze our credit accounts and paid nothing. ??

Loved Jake but couldn't get through the gun rally bull.