Home About Archive Contact
How Long Do You Want to Live?
ELDER MUSIC: Jesse Winchester

There is a fascinating article at Atlas Obscura about the slang of soda jerks during the heyday of their existence. There were

”...half a million employed at tens of thousands of soda fountains across the United States in the 1930s and 1940s. They had white coats, swift fingers, and even swifter tongues—indeed, their linguistic concoctions were as much of a draw as the sweet treats they served up.” 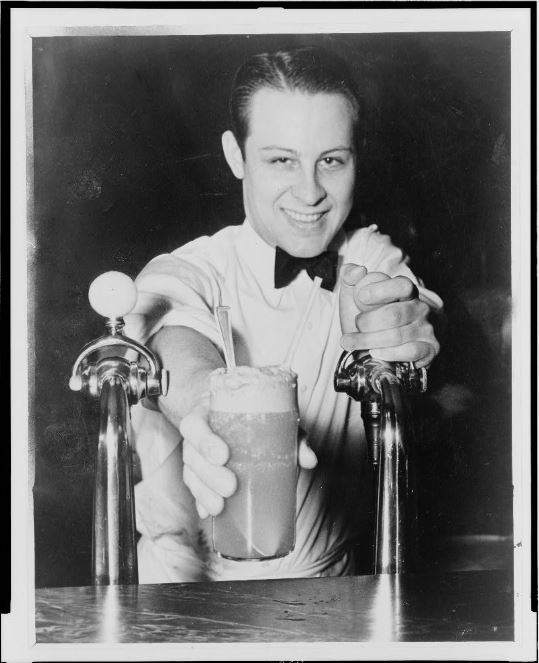 Some examples of those linguistic concoctions:

Visit Atlas Oscura for more of the soda jerk slang and the story of the now long-gone drug store phenomenon.

TWINKIES IN THE PARK WITH GOD

Trust me – you're going to be charmed by this:

Actor Benedict Cumberbatch has played a fine Sherlock Holmes in a television series set in the modern day and co-produced by the BBC and WGBH. Recently, in London, the actor went to the aid of a bicyclist attacked by a muggers:

”His actions meant the attackers fled, it was claimed, as he bravely fended the perpetrators off who allegedly smashed the cyclist over the head with a bottle,” reported The Telegraph.

“According to witnesses, he dragged the four muggers off the victim, who was in his 20s, after screaming at them to leave him alone. One of the men had tried to steal the cyclist’s bike, but nothing was stolen.”

And it all happened just around the corner from 221B Baker Street, here is Cumberbatch with Martin Freeman who plays Dr. John Watson in the series. 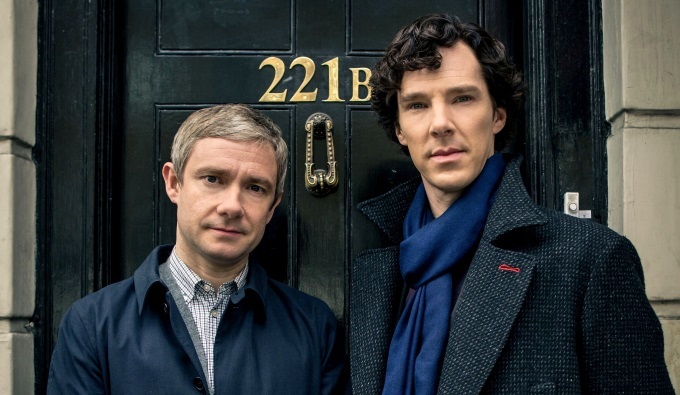 A sign of the times, the end of era.

Actually, the company stopped production of their last film camera, the EOS-1v, in 2010, since then they have been selling remaining stock.

”The translated page from Canon’s website delivers the news casually: 'Thank you very much for your continued patronage of Canon products. By the way, we are finally decided to end sales for the film single lens reflex camera ‘EOS – 1v...'

“Although this means Canon is no longer selling any film cameras, it doesn’t spell the death of film — at least, not yet. Nikon still sells two film cameras, the F6 and FM10.”

One more thing we will need to explain to the younger set – that we used to drop off film (what's film? they will ask) at the drugstore and wait a week to see our photos.

More information at The Verge.

THE FEATHER FAMILY OF FRANCE

”Since 1929, Maison Février has been responsible for adorning cabaret performers in an extravagant array of gear and garb. They have created elaborate costumes for greats, such as Josephine Baker and Zizi Jeanmaire. Today, under the watchful eye of Editte Février, the latest generation of the 'feather family' continues the legacy, spending months creating showstopping garments for the storied cabaret, Moulin Rouge.”

At 17 minutes, this video is a good deal longer than I usually post but I think you will find it worth your time.

It tells the story of Ramon, a widow and long-distance truck driver who lives with his parents. He has a special companion on those trips who has helped lift his grief and taught him a new kind of love.

There is some more information at Aeon.

Whatever you think of Donald Trump, he has given new life to editorial and political cartoonists. In fact, he supplies so much material that there is hardly any other subject for cartoonists these days.

Darlene Costner emailed this one after the U.S. Supreme Court sided with the baker who refused to make a wedding cake for a same-sex couple. 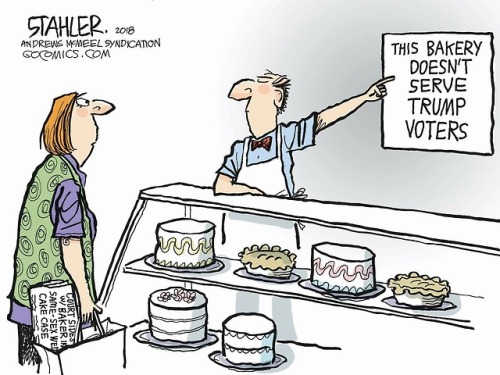 LIVING IN THE ROUND

Located about an hour outside Amsterdam is a village of spherical homes straight out of your futuristic fantasies. From a distance, Bolwoningen’s domes appear to be a set of golf balls, but up close, they are the architectural masterpiece of Dutch artist and sculptor Dries Kreijkamp.

“Built in 1984, each home contains three levels with round windows that give view to the scenic canal. The intent of the complex was to bring residents closer to nature.

If you've been here for awhile, you know I can't resist interspecies friendship. Here's another from reader Cathy Johnson – a prairie dog and a German shepherd.

Interspecies friendships! Love Cucli and the shorter short on the prairie dog and canine. I followed Aeon links, especially the Originals. Treasures all. Thank u, Ronni and Cathy Johnson!

Thank you Ronni,.What a profound little film Cucli is; I sent it on to my sisters.

What a charming way ro spend a Saturday morning. Thank you Ronni!

The truck driver and the dove reminded me of my sister and the Turtle Dove she rescued when he was nearly buried in a dirt pile when his nest had been destroyed. My sister named him Squeaky and he lived in their house for years. All sorts of adventures happened to that small bird before he flew out during a move. A long story and I may tell it someday.

Cucli is a beautiful film, but I really fell in love with Prince the prairie dog. I'd never thought of a prairie dog as a pet, but goodness knows there are millions of them in the rural areas around Denver.

And at first glance I thought the cartoon was the same one I posted yesterday. But no. Same topic, different verbiage.

Black cow. Haven't heard that in decades!! There was a fountain in a drugstore three blocks from my house. I always ordered cherry phosphates.

Dove story gave much to think about. As for the round houses they are much to close for my taste. :-)

Political cartoons I know save on a usb, ran out of scrap book.

happy stories among all of the depressing ones. there is HOPE!

Cartoonists and comedians are helping keep me sane in the, hopefully, short era of Trump.

Thank you for the delightful Stahler cartoon, Ronni. Perfect for the politically weary.

I so agree with Janet about our comedians and cartoonists. The political news will drive me 'nutty', and at 80 the drive would be a very short trip. My solution is, I only occasionally look at national headlines as it seems more depressing each time I do.

In the 60s I was living in a 'toddler infested' house in a new town, no TV, and husband working long hours. The radio saved my sanity. Peter Paul and Mary were favorites of the local small station and I became a fan of the type of 'political' songs they did.

But Peter has mellowed out a bit--hopefully we all do. Here is his latest effort, sung to the melody of an old Sinatra hit called "Unforgettable" . Peter's version is "IMPEACHABLE". It is quite short, so easy to hear it to the end for the final line. :-)))

I cannot post a link, but if one just Googles Paul Stookey's "IMPEACHABLE" you will be able to hear it if you like or need political relief for medicinal reasons, of course>

LOVE the cartoon--just wish it would spread to the Rethuglicans in Congress. This spineless group seems bound and determined to kowtow and "serve" the vile, detestable Emperor of Trumpistan.

Enjoyed the Cucli film -- interesting philosophy to which he has evolved. Only in recent years have I heard what in our Great Lakes Midwestern neck of the woods where I lived were called Brown Cows, made with brown-colored Hires Root Beer, referred to as Black Cows -- an awkward sounding terminology to me as none of us poured anything black over our vanilla ice cream.

Some years ago I was able to make a brief visit to the town where I spent those early years. I regret not having time to do much more than peek in the door at the old drugstore I recalled. The interior has been retained just as I recalled with the counter and stools behind where a Soda Jerk would have worked making those various flavored phosphate drinks, all sorts of ice cream delights I couldn't afford.

Living in the Round is for the young I expect, since all those stairs for three levels could be a challenge for some folks -- good exercise to stay in shape though.

We seem always to be intrigued by interspecies harmony. On the one hand, we see getting along is possible. On the other hand, we can't help but note how rare it is. Is that the way it will be if we meet other life forms from outer space?