In a three-to-two party-line vote, the U.S. Federal Communications Commission (FCC) repealed net neutrality rules put in place by the Obama administration in 2015 and that repeal, despite massive, nation-wide objection, went into effect on 11 June 2018.

We have discussed this often enough in these pages that you probably know what net neutrality is all about. But just in case, the idea at its most basic is that before this vote, internet providers could not, for example, block websites they don't like or slow down load time of websites whose owners have not paid a fee for speedier service.

Now they can do that along with pretty much anything else they can think up to charge more and/or control access to information.

”...service providers have carte blanche to strike deals with powerful Internet companies. A company like Amazon, for instance, could pay service providers to make their content stream faster, thus making it more appealing to consumers than its competitors.

“Any company looking to game the system is now able to do so, and those whose pockets aren't so deep are now at a marked disadvantage.”

The FCC repealed the common-sense, net neutrality rules despite unprecedented public approval of it. As The Hill reports (emphasis is mine):

”Americans like net neutrality. Surveys have consistently shown that a majority of Republicans, Democrats, and Independents all support the 2015 net neutrality rules.

“For example, one survey from April found that 82 percent of Republicans and 90 percent of Democrats opposed the FCC’s move to repeal the rules, echoing similar numbers from other surveys, including those funded by the cable industry.

Most technology reporters I've read are pessimistic about the chances of reversing the net neutrality repeal. State of the Art columnist at The New York Times, Farhad Manjoo, goes further:

”As I’ve noted often in the last few years, big companies have been crushing small ones over and over again for much of the last decade,” he wrote on the day repeal took effect.

“One lesson from everything that has happened online recently — Facebook, the Russians and Cambridge Analytica; bots and misinformation everywhere — is that, in the absence stringent rules and enforcement, everything on the internet turns sour. Removing the last barriers to unfair competition will only hasten that process.

“It’s not going to be pretty.”

Nevertheless, there is strong pushback from a majority of states. In a variety of forms, more than 30 are producing their own net neutrality legislation. Here is a map of those efforts from the National Regulatory Research Institute (NRRI). The legend in the main image is too small to easily read so here is a larger version of it: 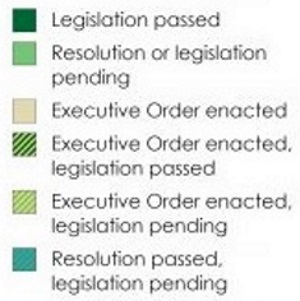 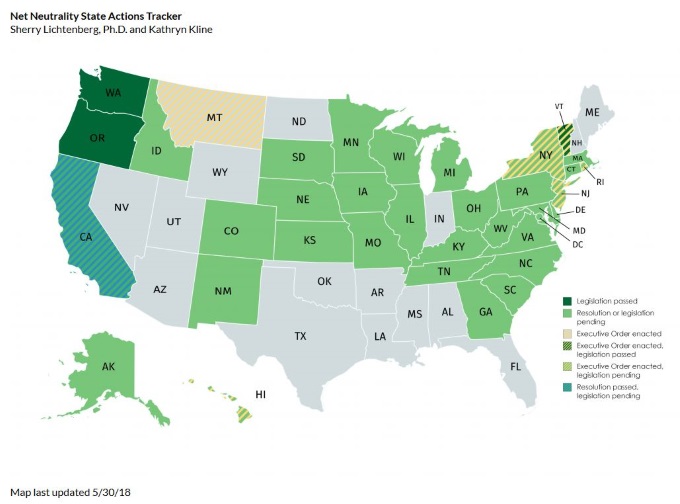 Follow this link and scroll down to view details of the efforts in the states.

It is not clear that all these attempts to restore net neutrality locally are legal or that all will succeed. Some of those some states and a few others are suing the FCC over net neutrality. Here is that map: 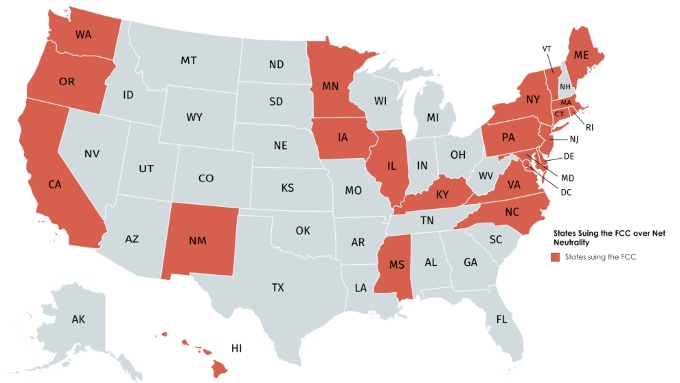 The Times reporter, Farhad Manjoo, spoke with one of the two Democratic commissioners at the FCC:

“'History shows us that companies that have the technical capacity to do things, the business incentive to do them and the legal right — they will take advantage of what is made available to them,' said Jessica Rosenworcel, an F.C.C. commissioner and a Democrat, who voted against the repeal of net neutrality last year.

“'Now they can block websites and censor online content,' Ms. Rosenworcel said. 'That doesn’t make me feel good — and if you rely on the internet to consume or create, it shouldn’t make you feel good, either.'”

Also, there are continuing efforts in the House of Representatives to restore net neutrality. You can add your name here.

It is easy in such circumstances as this to feel impotent. But it takes only a small amount of effort and it couldn't hurt to telephone your representative or at least, send an email. You can get that information here.

Yes, this is something to fight like hell for.

The loss of open communication opens the door to public manipulation and that is already happening, but with the loss of NN, you won't know what they don't allow you to know. And this fight has shown that the majority opinion of public opinion doesn't matter when the politicians and corporates want something else. And that is what they will control.

Vote them all out. The "Republican" party, as it now is, will obliterate democracy and time is running out.

I don't like being this scared, and the only thing I know is to fight - write, march, rally, encourage the young to get involved and please, please vote.

Simone's excellent point that corporations and the government are in a position of withholding information that they don't want you to know.

I assume the two Commissioners who voted to kill Net Neutrality are pro-big business enablers and against the, so inaccurately labeled, the "takers". This is one more victory for the Koch Brothers and their ilk. Just one more quiver in their arrow box of dismantling every good thing in this country; which is now a government of the corporations, by the corporations and for the corporations. Gaah!!!

I keep voting. But things keep getting worse. So depressing. These days, if you have no money, you have no voice.

Much appreciation for this post. Last week, I got slowed down, then
kicked off when I clicked "continue" on Daily Kos.

These tRump Rethuglicans are a despicable bunch. You watch them woo-hooing at their dreadful rallies where they cheer the downfall of our country as the Bully-in-Chief eggs them on. Many of them may not even understand what the repeal of net neutrality means since it won't affect how they receive Faux News.

They are led by the head Swamp Creature, aka the Emperor of Trumpistan, who is in the process of systematically destroying every vestige of democracy and decency that our country has struggled so hard to achieve. I keep thinking that there must be more of us (Never Trump) than there are of them (Trump Forever) but that won't matter unless every single Never Trump voter actually VOTES--not only in 2020 but in November of this year as well.

We need to vote in such record numbers that even 'Thuglican gerrymandering, continued Russian interference and dark money can't defeat millions and millions of votes. Agent Orange and his minions must be thrown out of office and sent back to the primordial swamp from which they emerged.

Can you tell how I feel about the head Swamp Creature and his sycophants? I don't usually speak this bluntly on a public forum, but desperate times, etc. . .

It's pretty obvious that the Internet is a utility, like the telephone, electricity, etc., and should be regulated to benefit all. So ... keep up the pressure!

Let me try to put NN in a more personal perspective.
Right now, my little relatively insignificant blog (and in a greater sense, Ronnie's more popular blog) has the potential to be as powerful as any other news and information website on the net.The people that host my website, despite the fact that I use their free service, do not discriminate when it comes to the content I choose to publish, its format or the speed at which it loads on a readers device. I can reach the same world-wide audience as The NY Times or NBC. But what would happen if now they said that all that will end if I don't pay an exorbitant fee for their service? I can't afford it, causing my blog (and my voice) to gradually fade away while a more well-to-do blogger is free to do and say whatever they want? If that doesn't sound dangerous to you, I don't know what does.

California has been the state expected to pass one of the strongest net neutrality bills, and the legislation was passed! But don’t be too quick to celebrate, because the bill is reported to have been so watered down at the last minute as to remove the protections. I noted this on my current blog post with a link to one of numerous reports on this betrayal of the populace.

One California Assemblyman, who is a prominent member of the predominant political party, has been cited as leading that last minute bill watering down effort. Coincidentally, some of his largest donors are named corporations who opposed net neutrality at any level and stand to benefit from the bill’s weakening.

Both political parties have individuals who fail the best interests of their constituents. I wonder what, if anything, constituents will do about that on Election Day?

People still seem to vote for those who do this kind of thing. I guess the ability to see cause and effect has been lost.