Home About Archive Contact
Tales From the Afterlives
Caregiver Friends

Americans are here today to celebrate Independence Day which is set aside from all other days to recall the United States' declaration of independence from Great Britain.

The document itself, The Declaration of Independence, was signed in the Pennsylvania State House (now Independence Hall) at Philadelphia in 1776. (I like this copy with the edits.) 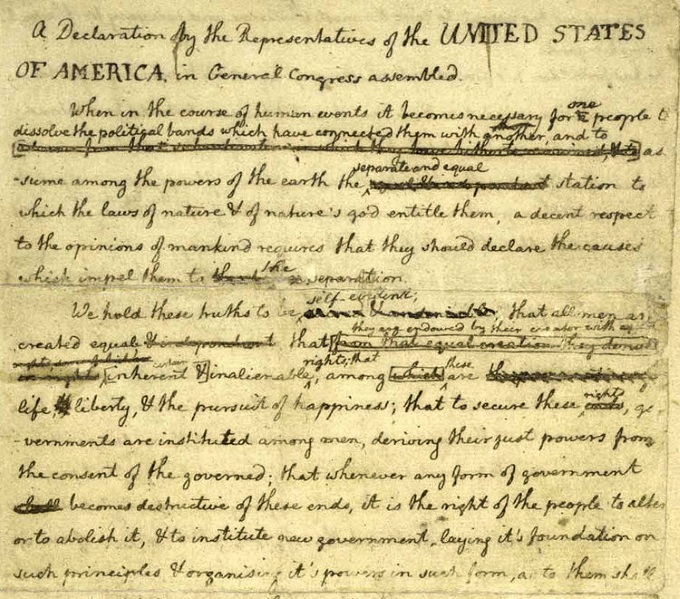 Actually, the document was not signed until August 2 and August 3, 1776, but it was adopted on the Fourth of July so that is when we celebrate.

Like last year on this date, today the republic is looking a raggedy around the edges and some of us are worried, even frightened of what the current regime in Washington. D.C. is doing to our imperfect but always, until now, striving nation.

They are intent on trashing the reasons we have a Declaration of Independence in the first place.

Nearly every day, the president and his self-appointed minions in high places commit more outrages. Baby jails. Rollback of environmental protections. Vicious trade wars with allied countries. (Canada???) Open, overt racism and sexism. Lies, lies, lies. And – well, to track it is a full-time job.

The ultimate irony of today's holiday is that as we celebrate (or try to) the nation's rejection of a king 239 years ago, the president has made it abundantly clear that he doesn't like being president. He wants to be king, a tyrant like his “pals” who rule by fiat in Russia and North Korea.

We are heading in that direction, folks, and there is no one we have elected who can or will stop him.

There are many inspiring quotations from great thinkers about what the maintenance of freedom entails. I've chose three that speak to what we are up against during this assault on our nation's very existence:

“Liberty means responsibility. That is why most men dread it.” - George Bernard Shaw

“Those who expect to reap the blessings of freedom must undergo the fatigue of supporting it.” - Thomas Paine

“It does not take a majority to prevail, but rather an irate, tireless minority.” - Samuel Adams

That's our job now. Every one of us who believes in the Declaration of Independence (which, by all reports coming from the federal government, does not include the president), must do what we are capable of to help preserve its ideals.

Take some time today with your family and friends to enjoy your barbecues, the parades in your town and fireworks tonight. We can do that even when we are worried and maybe frightened – we can use the respite for a day.

And here is a little history of fireworks I found online. I have no idea if it's true, but it's a good story.

Happy Fourth of July, everyone.

Isn't it interesting how much has its origin in a quest for immortality? I wouldn't have guessed, though, that would also be the story behind fireworks. Thanks for the 'illuminating' post. And a happy and safe 4th to you, Ronni, and all your readers.

Happy Independence Day, Ronni, and many more to celebrate!!

Happier Independence days are coming, meanwhile, loved the firecracker story!
And thanks for being a fount of fun and useful, meaningful information!

Oooo, I'd never seen an edited copy of the Declaration. Wish the strikeouts weren't quite so determined. Hard to see the original.

Anyway, Happy Fourth to everyone. We still have a lot to celebrate.

I am celebrating this doubtfully celebratory day by attending & cheering the Naturalization Ceremony happening at noon, with friends who, like me, are tired of protesting all the time.

I am confident that we (America and Canada) will work out our differences,
just like good neighbours and friends usually do.

Happy Independence Day, Liberty people, and from your post, Ronni, I'll add that we must consider interdependence with our allies and neighbors as a vital, welcoming part of our independence.

Especially Canada and Mexico with whom we live and share the same "rock."

I loved the edited Declaration! I have done editing in my past jobs and have always enjoyed the process. So neat to see how much thought was put into this very important document.

Happy Fourth of July to all! One of my grandchildren was born on this day and, when little, thought the fireworks were for her! :-) For me, they still are and are still a good reason to celebrate.

This granddaughter is going to give me my first great-grandchild in 2019.

Happy Fourth of July to all. Nice piece by Steve Vladeck at NBC about why we celebrate this day with its aspiration toward freedom and equality rather than the adoption of the Constitution or the inauguration of George Washington. We're making a statement about the nation's essential values with this holiday.

And sometimes the weather cooperates ... don't fry out there.

It's a little hard to celebrate our Independence today as the would-be-king tries to take our freedoms away. I am making this day a commitment to helping restore the four freedoms and hope that others will do so also.

Anyhow, enjoy your picnics, bar-b-cues and fireworks with family and friends. We still have a lot to be grateful for.

Happy 4th of July to all.

I SO agree that the current despicable occupant of the Oval Office would much rather be King than merely president. He seems to have unreserved admiration for dictators, autocrats and strongmen over governments that support and protect democratic ideals and institutions. He's made it painfully obvious that he would like to rule with absolute power over an all-white nation where only the wealthy enjoy any real rights and privileges. That is not the America I would wish to inhabit.

Demographics, among other factors, will doom him and his ilk in the end--at least I hope so. Unfortunately, it's hard to celebrate this 4th of July, other than to appreciate that we still live in a democracy--more or less, at least for now. There's not a lot an 81 Y/O female on a retirement income can do to keep it that way, but I plan to do what I can for as long as I can.

I don't want to be a complete cynic on this day which commemorates the birth of a democracy. But tell me how this is still a democracy when we must live with the results of a supposedly democratic election in which the votes of more than three million citizens did not count. Tell me why the votes of urban citizens counted so much less than the votes of rural citizens even though we now clearly live in an urban society. No. Until we are rid of the electoral college which, through an unanticipated course of human events, set the stage for the destruction of democracy, I don't see how we can celebrate.

Clearly preserving our democratic republic’s freedoms is no easy task. I hope this day we can re dedicate ourselves toward that end. Might help if we can enlist the support of more of those we elected to Congress to represent our best interests. We best support our Fourth Estate as more and more it looks like they may well be our last line of defense. Thanks for another to the point post.