After more than a century, the company that owns Nabisco freed the animals on its Animal Crackers boxes.

”Mondelez International, the parent company of Nabisco, has redesigned the packaging of its Barnum's Animals crackers after relenting to pressure from People for the Ethical Treatment of Animals,” reports The Associated Press.

“PETA, which has been protesting the use of animals in circuses for more than 30 years, wrote a letter to Mondelez in the spring of 2016 calling for a redesign.

Here are the before and after. The new boxes on now on shelves in the U.S. 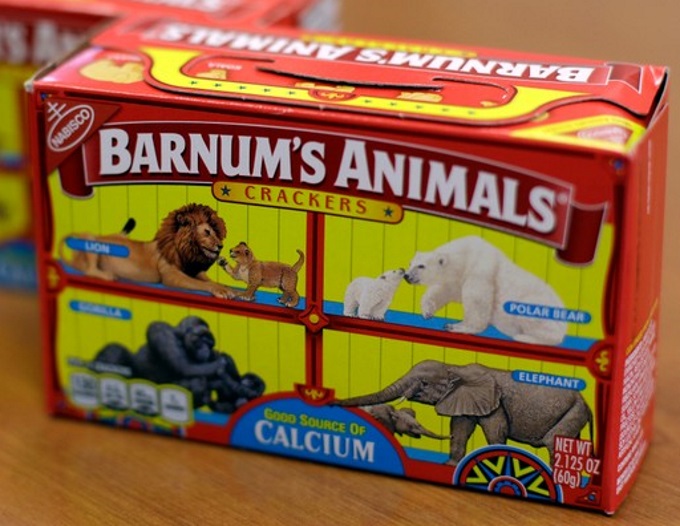 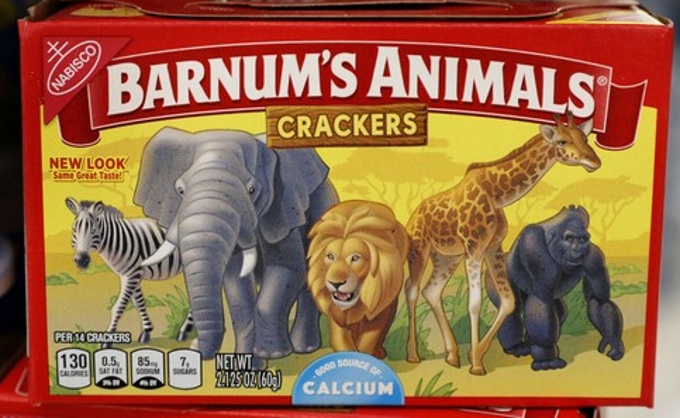 HE CAN PRONOUNCE THE ENTIRE DICTIONARY

Jacques Bailly is the official pronouncer of the Scripps National Spelling Bee in the U.S. He started his wordsmith career as the 1980 spelling bee champion. Take a look:

There is more at Laughing Squid.

And you thought robots would take all the jobs. In France, it may be the crows: This from The New York Times:

”...the wily crow is getting a makeover. Puy du Fou, a historical theme park in the Loire region about four hours from Paris, has trained six crows to pick up cigarette butts and bits of trash and dump them in a box.

Here's how it goes:

This isn't the first time crows have been trained to do this, just the most recent. Damned clever, they are.

Isn't magic fun? This one is more than that, it is spectacular. Thank Darlene Costner for sending it.

The magician's name is Marc Spelmann and he was given the first Golden Buzzer of 2018. (I have no idea what that means; I'm just telling you what I read.)

On Monday, Axios listed more of the infamous Orwellian phrases from the Trump administration:

“What you’re seeing and what you’re reading is not what’s happening" - Trump at the VFW National Convention, July 25, 2018

Axios also listed a few from the Party in George Orwell's 1984.

"War is peace”
“Freedom is slavery”
“Ignorance is strength"

There's no daylight I can see between the Trump folks and Orwell's Party.

CARVING A BIRDCAGE ON THE TIP OF A PENCIL

Artist Salavat Fidai uses a jumbo pencil with a diameter of 5mm to do this. I could be convinced that the video is a lot like watching paint dry except for the exquisite payoff of the result.

On HBO's program, Last Week Tonight last Sunday, host John Oliver took on some of the intricacies of trade. Sound boring to you? No way.

Oliver makes what generally is complicated understandable, compelling and even – as he so capably can do – funny. Oh, while you watch this, keep in mind that on Thursday, Trump imposed another $16 billion in new tariffs on China which immediately retaliated in kind.

How about some really good news.

Ten days ago, New York University School of Medicine announced it will cover tuition of all its students regardless of merit or need. The move resulted from NYU's concern that students saddled with tens of thousands of dollars in debt are choosing high-paid specialties rather than family practice, pediatrics, geriatrics and research.

”N.Y.U.’s plan...may spur other top medical schools to follow suit. In a statement, N.Y.U. said that it would be the only top-ranked medical school in the nation to offer full-tuition scholarships to all students.

“The plan, effective immediately, covers all current and future students. Annual tuition is roughly $55,000. There are 93 first-year students, and another 350 students who have up to three years left before obtaining their degrees...

“The plan does not cover room and board or fees, which together are an additional $27,000, on average.”

What great news – for students and for patients. Read more at The New York Times.

What happens when you take in an orphaned beaver...

Loved the bird cage and the magic trick. The free tuition for medical students is perhaps the best idea I've heard for increasing the number of doctors in the country, and there is a dire shortage of primary care physicians.

It is possible to order caps that read “Make 1984 Fiction Again” - the same style as the MAGA caps.

Gland to see that PETA, which has a high kill rate at its associated animal shelters, has finally accomplished some worthwhile: freeing cartoon animals. Now the lion can finally eat the zebra.

Okay, I am officially cranky today. Get off my damn lawn, everybody!

How about if, in addition to helping medical students, universities offer free tuition for those who want to become social workers, other mental health workers, teachers, etc.?

The magic from Marc blew my mind.