Home About Archive Contact
The Age of Presidents and The Alex and Ronni Show
ELDER MUSIC: Film Associations 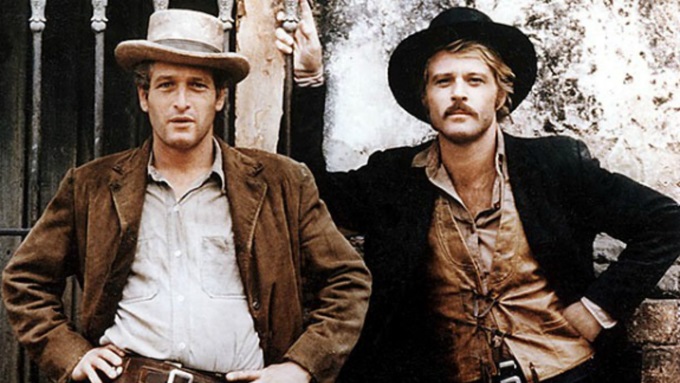 Yes, that Butch and Sundance who tried mightily to elude the guys who were persuing them:

“'Those guys,' wrote Boot, “turn out to be a collection of the best lawmen in the West, led by a legendary sheriff named Joe Lefors, who have been assembled to finally hunt down the bandits.

“Robert S. Mueller III is the real-life incarnation of Lefors, and his special counsel team is the real-life superposse. Like Lefors in the movie, he never says a word. Instead, he lets his work speak for itself...

“As Mueller’s investigation advances, methodically and relentlessly, Trump is acting as rattled as Butch and Sundance — minus, of course, the charm, wit and good looks of Redford and Newman.”

Exactly. You can read the entire column here.

In case you're interested, Max Boot, who is so much more than an opinion columnist, has become one of my favorite regular reads. You can find out more about him here.

This happens to me once every day of the week at the same time each day:

”More than half of all complaints received by the Federal Communications Commission — more than 200,000 of them — are about unwanted calls. The FCC said Americans received about 2.4 billion unwanted, automated calls each month, according to 2016 estimates.”

The spoofing comes in when you answer a call because the phone number displayed shows your own Area Code so you might think it is a friend or neighbor. (I never learn; it gets me every time.)

You can read more here and this video has some information to help you keep calls to a low roar:

When I was growing up, Victor Borge was a staple on television variety shows of the era. I'd forgotten him until I ran across this video with one of his classic comedy routines:

Credit freezes are an important tool to keeping your personal financial information safe. As The New York Times

Before now, the three major credit agencies, Equifax, TransUnion and Experian charged a fee for consumers to freeze their credit. The first two dropped those charges awhile back and now, Experian has joined them in accordance with a new law that went into effect yesterday, 21 September.

Those links above will take you to each agency's credit freeze page. You can read more at The New York Times.

When John Oliver's HBO program, Last Week Tonight, is on hiatus, he sometimes posts a short, web-only video to carry us over until the next full show.

Here is one about retractions of previous statements he has made in error. Or not.

THE LAST SCISSOR CRAFTSMAN IN JAPAN

Not many people can afford these scissors. It's an amazing story and sad, too, that this man is the last one who knows how to do this.

There is a new study linking air pollution to dementia. Here's a short news video:

As The Guardian reports:

”Air pollution has already been linked with cardiovascular and respiratory disease, but this is one of the first studies to examine links with neurodegenerative illness.

“Frank Kelly, professor of environmental health at King’s College London and one of the authors of the paper, told the Guardian: 'The study outcome suggests a linkage [between air pollution and dementia] but cannot inform on the cause. However, I believe that we now have sufficient knowledge to add air pollution to the list of risk factors for dementia.'”

More at The Guardian and the Daily Beast. The full study is at the BMJ [pdf].

This is no exaggeration. It happened to me almost word-for-word a few days ago. My friend and attorney John Gear sent it, perhaps in response to Crabby Old Lady's elder tech complaints last Monday.

WINDOWS:
Sorry, the password must be more than 8 characters.

WINDOWS:
Sorry, the password must contain at least one upper case character.

WINDOWS:
Sorry the password cannot use more than one upper case character consecutively.

Have I shown you this video before? I know I saw it sometime in the past but I don't recall if I posted it. Anyway, it's just as amusing the second time around for me and maybe for you too.

And let's give the writer a hand – it's a great script.

Thanks again for a good start to my w/end :):)Dee

I have enjoyed all your previous Saturday posts but I must say I enjoyed this one the most! Lot's of good interesting and fun stuff! Thanks a bunch.

That password thing had me in stitches! Fortunately I use a password manager that will dream those things up for me, and remember them.

As for the phone calls that were driving me crazy, I got a call blocker app that will block any number that's not already in my contacts. And I forward all landline calls to my cell phone. The peace and quiet is amazing! Saved my sanity, what there was left of it.

Our land line gets three to seven spoofed calls every single day.
Loved the woodpecker vs squirrel video.

Good morning!
Regarding robo-calls, I'm finding them more problematic now that at least one of our health providers use them to confirm appointments. So now I have to let them go to voice mail as they require a 'press 1' type of response. Darn nuisance. And of course health care is much more a part of our lives these days.

I have also, out of frustration, ended up with some passwords I wouldn’t want my mother to see.

I’ve had my credit reports locked for several years, and have only unlocked one once, which I did while I was on the phone with the company who wanted to check it. At my age that was probably the last time.

That changing a password routine -- too true to be funny -- and yet I laughed so hard tears are streaking down my face. Thanks for a reprieve from dry eye!

The Japanese have adapted OCD to the most marvelous uses I could imagine.

We are all lessened by the deaths of Victor Borge and Robin Williams, even during these times when I don't read past the headlines about mass shootings any more.

Ah yes, I remember Victor Borge. He was so funny and this joke made me laugh out loud (a rare occurrence, these days). Along with "All In the Family" Victor always made me laugh and I miss Carroll O'Conner and his TV family and Victor Borge most of all of the comedians of yore. I guess that shows my age.

Robo calls are my bane. They always manage to ring me when I am not near the phone and have to slowly stop what I am doing and go see who is calling. May they rot in the hot place.

Borge’s routines always elicit laughs from me when our PBS station periodically airs them.

Password construction issues are interesting considering Bill Burr’s retraction of how best to create them for security. Maybe we haven’t needed those complex mixes he originally is credited with having recommended. I’m not sure what’s considered the most secure now.

NOMOROBO screens ALL my calls. If I know the caller I pick up, otherwise I can always return the call. Rarely is it a desperate situation & I've stopped swearing at the phone!

I loved the password one. Made me laugh out loud.

Since I first got my mobile phone number while living in California, but have moved to Iowa, (long story), I can spot a phony neighbor right away. And guess what, they never leave a message.

I answered an Iowa area code call yesterday, though, and got caught in a lengthy political poll or survey. They asked several questions I'd not given much thought to and, upon reflection, would have answered differently. There's where your "margin of error" comes in.

Thanks for the ever interesting, "Interesting Stuff" every week.