TGB reader Mary sent this news article about a book, The Wisdom Of Wolves, by Elli H. Radinger and published in England last Wednesday. (Kindle only available so far on Amazon.) 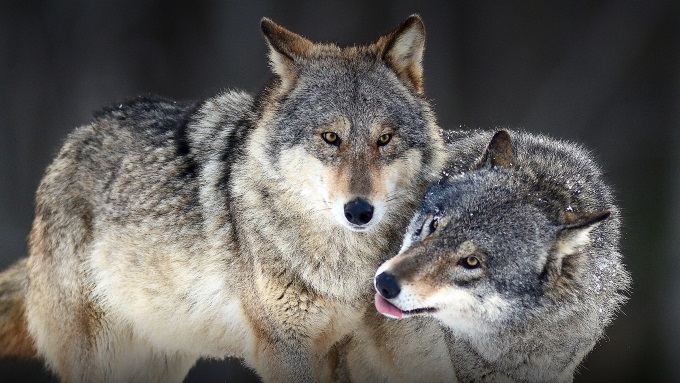 I've purchased the Kindle edition but have not read it yet so I'm working on the quite excellent BBC excerpts. It's all fascinating but of course, I honed in on the information about the elders in wolf families. Some quotations to whet your appetite:

”The pups are the beloved and protected treasure of the pack. The whole family looks after them, including aunts, uncles and older brothers and sisters. Old and wounded family members are brought food and never abandoned.

”Elderly or sick wolves, too, are cared for by the pack. Old wolves are invaluable. A pack with just one elderly member has a 150 per cent better chance of winning in battles because of their experience – they will avoid a conflict they don’t think they can win.

“In a pack known as Silver in Yellowstone, a young whippersnapper had become leader but treated the old deposed head with great respect – because the old gentleman was a master in the difficult art of bison-killing.

“When they die, there is genuine grief. Cinderella, one of the females from the park’s ‘Druid’ pack, died during a hunting trip. Her partner retreated into the den where they had raised their pups and howled for the next three days.

“Six months later, his skeleton was found in an area where he had spent many months with his partner. How he’d died remained a mystery. Could it have been a broken heart?”

Of course the article and the book are about wolves of all ages and the article can be found at the Daily Mail website.

Reader Jack Handley sent this video of 97-year-old Herbert Fingarette, a U.S. philosopher who once published a book about death. As the video page notes, in that book

”Fingarette contemplated mortality, bringing him to a conclusion that echoed the Epicureans: in non-existence, there is nothing to fear.

“But as Being 97 makes evident, grappling with death can be quite different when the thoughts are personal rather than theoretical. Filmed during some of the final months of Fingarette’s life, the elegiac short documentary profiles the late philosopher as he reflects on life, loss, the many challenges of old age, and those lingering questions that might just be unanswerable.”

Maybe I'm including this today only because the name of the place grabbed me. Note that this is a place for WILD animals. From the YouTube page:

Sprained paw? Broken wing? Tiggywinkles will get you back to roaring health. With over 10,000 animals coming through the door each year, Tiggywinkles wildlife hospital is the busiest (and cutest) in all of Europe.”

The hospital is named after the beloved Beatrix Potter children’s book character> The hospital employs around-the-clock doctors and nurses who treat injured and sick wild animals that are then released back into the wild.

50 PEOPLE TELL US THE WORST THINGS ABOUT THEIR STATES

Weather is a big topic:

AMERICANS WHO'VE NEVER MET A PERSON OF ANOTHER RACE OR RELIGION

The Atlantic reports on this phenomenon (emphasis is mine).

”In general, the proportion of Americans who seem to live in fully homogeneous communities is small: In terms of identities such as race, religion, and partisan affiliation, only one-fifth to one-quarter of people usually said they seldom or never encounter people unlike themselves.:

I'd say that's a fairly high number in a nation that likes (well, until recently) to tout its diversity. (Statue of Liberty, anyone?) According to The Atlantic report,

”They seldom or never meet people of another race. They dislike interacting with people who don’t share their political beliefs. And when they imagine the life they want for their children, they prize sameness, not difference. Education and geography seemed to make a big difference in how people think about these issues, and in some cases, so did age.”

More on the divide at The Atlantic.

In Nablus, West Bank. It looks to me to be back-breaking work. But it's interesting to watch. Take a look:

John Gear sent this tweet and as various conditions of elderhood pile up (it's not the conditions themselves so much as the number of them that accumulate and need to be dealt with), I can't say I disagree.

My grandmother lived to be 102.

When I asked her what her secret was, she said, “God’s punishing me.”

”An observant, stray calico cat who fit perfectly into a curved ticket gate at a station in Tel Aviv, Israel, watched intently as commuters attempted to scan their train passes to get through.

“Surprisingly, not many people paid attention to the cat nor did they even notice that she was there.”

”Kitbull...reveals an unlikely connection that sparks between two creatures: a fiercely independent stray kitten and a pit bull. Together, they experience friendship for the first time.”

I so enjoyed today's video and stories. I too ponder what dying will be like and what it means. I am more afraid of needing help than dying. Interesting that.

Oh, thank you Ronni and Jack Handley for introducing Professor Herbert Fingarette, a gentleman and a scholar. I will be searching for his books.

Professor Fingrette in this talk has addressed the issues that are constant in my days. That this distinguished thinker could find no clear answer relieves my nagging thought that it is imperative to resolve this. Perhaps "there is no point" is the answer. Exist, wait and try to truly appreciate the trees. Or the many small moments of awareness that tree appreciation symbolizes. Accept our losses.

I wish I could sit over coffee and discuss this insoluble mystery with him. But recent posts have nudged me along toward an acceptance of the insoluble. Thank you Ronnie for this pathway illumination.

I look forward each week to your Saturday selection. This one is outstanding
I’ve reserved the Wisdom of Wolves at our local library.
I wonder what sort of life those hardworking soap producers enjoy?
And the 97 year old philosopher was mindblowing.
Thank you, Ronni.

I too wish I could sit and talk with Professor Fingarette, about anything. I hope he got some good, mind stimulating conversation in his last years.

It was surprising to me that only one person acknowledged the cat in all that human crush.

And the soap makers! The world is full of wonders, and thank you for bringing some of them
to us.

I seldom watch videos (here or anywhere on any subject) but I am very glad to have watched Dr. Fingarette. Having spend the morning writing two short remembrances of people who had died, perhaps I was ready for his observations. Is there meaning in the stardust, or just is-ness? Is there anything deficient about the latter?

The professor would be wonderful to talk with for hours, wouldn't he? He'll be missed.

Tiggywinkles. The Brits have a way of coming up with the most delightful names.

The soapmakers are fascinating. But what back-breaking, mind-numbing work. Modern mechanization could easily handle every step of the process ... while putting a lot of people out of work.

And I loved the wolves and the cat. Two of my favorite critters. My cat turns 16 today, and is currently purring in my lap.

This was a particularly charming post today, Ronni, especially the video on Professor Fingarette. I think his conclusions speak to the fact that we each have to come to our own conclusions about life and death. But it was curious to me that he should still be so afraid of death. I would have liked to have talked to him about that. Anyway, thanks so much for the great selection.

Were I not in public I'd cry big tears. (People make such a fuss when others cry or like the Tel Aviv kitty, pretend you don't exist. Neither is good. ) It's bec I'm tired, on travel for work & the ppl I was to have lunch with couldn't. I love being alone but being with treasured friends or even just noticed like the cat wasn't is better sometimes.

The story of the wolves made me want to be adopted. Or more to take their culture to be ours. Wasn't it that way once? When people were born, lived and died in the same communities?

I've not been to Tel Aviv. Is this usual? Not a smile at the cat or a laugh or more head scratches.

Thank you reader Jack, for sharing the very good video on Herbert Fingarette. I always knew the answers of Living a good Life, were found in the simple things and our personal relationships--this video has confirmed. Thanks again.

I don't cry much these days. I teared up when Fingarette talked about how he missed his wife. I'll be dying a lot earlier than 97, but soon or late, that's the price of a happy marriage. Regrets about dying, that's the big one. I don't want to leave my husband to that kind of loneliness and pain... but I don't get a choice, do I?

For all his philosophy, Fingarette may have missed a path to meaning.

The meaning I have found is: it's enough that it once was. I existed, we existed, the happy days existed. I did find time to truly see the curve of a rose petal, or a maple tree ablaze against a blue sky. I did have joy, and adventure, and love.

So now I'm going to weep that it's over? No. A child cries because it's bedtime. I can be glad that I had a very full day, and now I am on my way to sleep.

But that's me. It still hurts that I can't spare my husband.

oh my gosh the soap making! I must admit I didn't understand the pounding before the cutting.

Poor kitty. got a couple touches and smiles.

Bonnie, they were stamping each cake of soap - with a brand or logo, I imagine.

The video showing the making of the soap was so interesting - in fact all the videos this week gave me pause for thought.
Ronni I’m really pleased to hear about your current run of good health results. A day at a time eh?