PAY IT FORWARD, ACTS OF KINDNESS

And oh what those acts can do. From Tom Delmore.

You know fro these posts that I can't get enough of interspecies friendship. Here's another.

You've heard of ice hotels? This is an ice orchestra. The Youtube page explains:

”Tim Linhart was sculpting ice in Colorado when he decided to try something new: creating a giant, frozen violin. When a friend jokingly asked how Tim thought his violin would sound, it sparked an idea. Why not make an entire, functional orchestra out of ice?

“That was 21 years ago. These days, Tim is based in Sweden and gathers his icy ensembles to play in cosmic igloos. Grab a seat, and best don’t forget your coat.”

”In 1939, 20,000 Americans rallied in New York's Madison Square Garden to celebrate the rise of Nazism - an event largely forgotten from U.S. history.

“A Night at the Garden, made entirely from archival footage filmed that night, transports audiences to this chilling gathering and shines a light on the power of demagoguery and anti-Semitism in the United States.”

Margaret Talbot wrote about this film in The New Yorker last week.

"When the newly-renovated airport was re-opened, management decided to take the campaign even further by perching a rather garrulous gargoyle in the middle of the brand new Jeppesen Terminal. The 243-year-old patinaed creature hilariously engaged with skeptical travelers, disbelieving tourists, curious little children and even a custodial employee or two."

OCTOPUS ESCAPING THROUGH A ONE-INCH HOLE

It's not that I haven't seen this before, it's that it still amazes me.

BEFORE WINTER IS OVER, MY BLIZZARD STORY

From Cop Car who blogs at Cop Car's Beat. Back in 2005, Cop Car related her 1983 big blizzard story here and I followed up with this one of mine. It seems a good time to repeat these:

”I lived in Greenwich Village, downtown, and the production office of the ABC-TV television show I worked on was at Columbus Circle, about three miles north.

“Overnight, the snow had piled up, closing in on two feet. The wind was blowing and the snow showed no signs yet of diminishing.

“Everyone else in our small office lived out of the city or on the east side where subway travel was not easily usable, but there was some work that HAD to be done (no email yet in those days or VPN networks), so it was up to me because my commute was to walk one block from my home to the subway and then one block to the office at the other end of the ride.

'I bundled up: longjohns, two or three sweaters, knee-high, fleece-lined boots, hat and - important to the story - an extra-large, bright blue parka I'd been given on a cold-weather shoot; it had a giant ABC logo on the front of it.

“Columbus Circle is well-known in New York City as a dangerously windy corner and that proved true when I climbed out of the subway there. It was blowing hard - that tiny kind of snowflake that is not quite sleet, but hurts when it hits your face.

“I wrapped my arms around a light pole while I peeked between gloved fingers to see when it might be safe to cross the street - Broadway - which lives up to its name, very broad and on that day, icy and slick.

“At last, the few cars looked far enough away that I could cross and have time to pick myself up, if I fell, before a car could slide into me.

“As I let go of the light pole to step off the invisible curb, a giant gust of wind blew me down on my back in a huge snowdrift. With all four limbs flailing in the air, I must have looked like a big, blue-clad turtle on its back.

“Now, remember the ABC logo on my parka? As I tried to right myself, I saw a camera pointed right at me. A camera with a CBS-TV logo pasted on it. The cameraman yelled through the wailing wind: 'You'll be on CBS tonight, baby.'"

From the Laughing Squid page:

“Weggen stated that he became a full-time photographer in 2013 and these squirrels and birds are his specialty.” 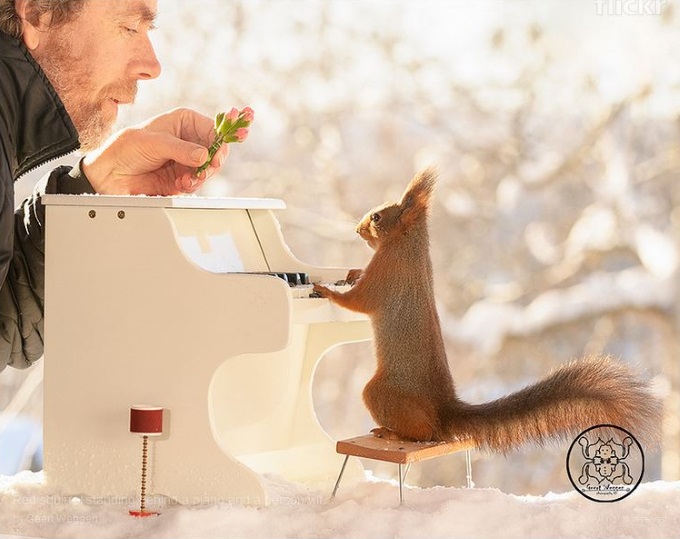 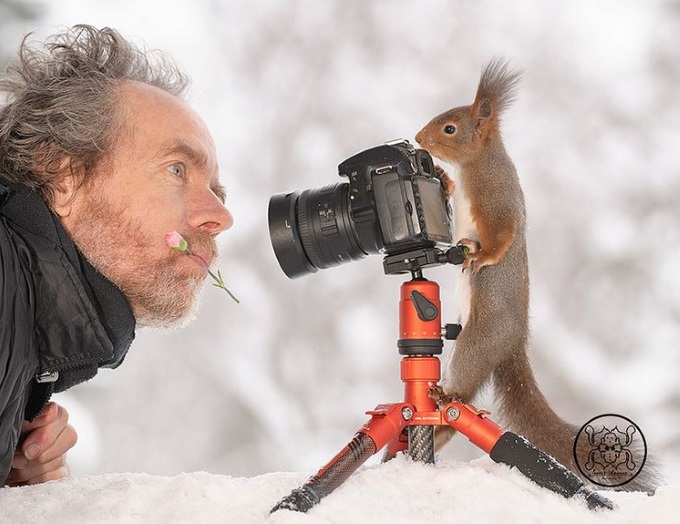 And here's a video of Weggen and one of the red squirrels.

“Don't mess with mama...One hungry leopard in South Africa learned this the hard way recently as it zeroed in on a possible meal. In the tense video, the leopard begins to attack a baby honey badger until it is viciously undone by the cub's mother.

“Honey badgers are known to be fearless, but taking on an adult leopard is bold even by their standards. This clash shows how strong their maternal instincts can be.”

Thumbs up again, Ronni! Good way to start the w/end. Hope you have a very good day. Dee:):) PS: 82 yesterday & I told all my family well wishers that that will be the last one to celebrate. And I mean it! ( said in my best Lilly Tomlin voice! LOL)))D.

Love the Pay it Forward one, thanks for sharing Ronni, have a good weekend, m

Thank you for another interesting post. Love your blog.

As always, a great way to start the weekend. I'm a sucker for animal stories. Have lived in Denver for 10 years and this is the first I've heard of the gargoyle. Usually the big blue mustang, Bluecifer, gets all the attention.

I very much enjoyed the short video on humans & squirrels as presented by the photographer Geert Weggen. Now in retirement myself, here in Rhode Island, we have made a bunny trail in the backyard, we call the "Back-40." All sorts of wildlife visit, year-round, with our 4 changes of seasons. I have a Sammy the Squirrel photos; he visits almost daily, to sit on our deck railing, to pose and "chitter" (squirrel talk)--a most interesting animal! Thanks again for the sharing.

I love Saturdays. Always a nice beginning to my day! Thank you.

Thank you for sharing the endearing "Pay it Forward'' video, Ronni.

I have always like that idea since it first began circulating among folks with giving hearts several years ago. I was totally charmed by the dear lady, Mimi. Her spirit is a great role model for any lady of my vintage (81) and living alone. Then too,
I am also "Mimi" to some folks.:-)

My son is a documentary film maker that married late in life. They now have a little girl...she turns 7 y/o today. They live in California and she has learned how to dial her grandma all by herself ! She has always called me "Mimi". I suspect it was because it was easiest for a toddler to say, but I liked it and it stuck.

Since I am in Portland I rarely get to see them, but the calls really matter a great deal. I know the teen years are coming, so hearing her sweet voice is dear to me even more now,...while it lasts.

Really like "Pay it Forward" and 3 cheers to mama honey badger, too!

A Night at the Garden reminds me of a trump rally and the audience, his cult, although this earlier audience are not wearing red MAGA hats, T shirts with profanities, shooting the middle finger and yelling obscenities at journalists. Scary and insidious stuff.