When, in the middle of a conversation, I forget a word I need – usually a noun – I lament that I am not a comedy writer. If I were any good at that, there is fun to be had with a sketch of two old folks trying to have a chat while every third or fourth word won't come to mind.

(Some would call such a sketch ageist, but not me.)

It happens to me every day (while I write, too) and multiplies during three or four days following chemotherapy when “chemo brain” is at its worst. Sometimes the entire idea or concept of what I'm trying to say disappears.

Recently, researchers at Boston University tested the memories of the brains of people older than 60 and those of a similar group of people in their twenties.

“Then participants were fitted with an electrode-covered cap that stimulated two areas of the brain (the temporal and prefrontal cortex) with electricity for 25 minutes in a way that made the brain waves fall into sync.

“When the groups were tested again, the participants who had been stimulated were much improved in the tests—and were as good as the 20-year-olds. The effect lasted for at least 50 minutes, when measurements were stopped.” 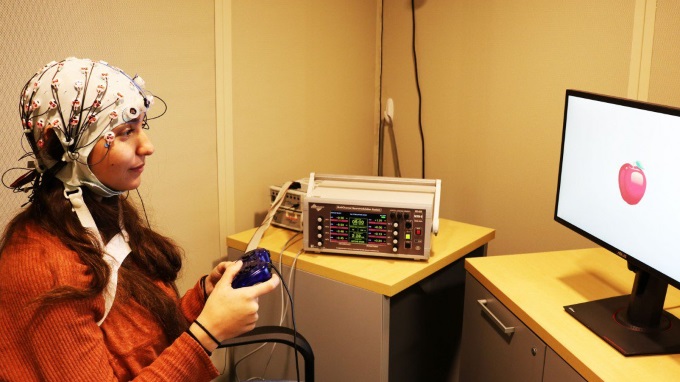 One of the researchers, Dr. Robert Reinhard, said they can bring back a more superior working memory function that the elder group had when they were younger:

"'This is important because the global population is rapidly ageing, and the elderly struggle with many real-world activities that critically rely on their memories,' Reinhard told the BBC.

“These included 'recognizing human faces, navigating the physical environment, remembering to take their medication and making financial decisions,' he said.”

Here's some really good news for us old folks: Reinhard told the BBC:

”...the largest improvements appear in the people with the greatest deficit at baseline...people who are struggling the most."

Another researchers have reported similar results including this one from a Fox News story:

”Dr. Barry Gordon, a professor of neurology and cognitive science at the Johns Hopkins School of Medicine in Baltimore...

"It's a superb first step" toward demonstrating a way to improve mental performance, said Gordon, who was not involved in the new study.”

Others are not so sure:

”Dorothy Bishop, a professor of developmental neuropsychology from the University of Oxford, says: 'It would be premature to extrapolate the findings to everyday functioning in individuals with clinically significant memory problems.

"'There is no indication that any beneficial effects of stimulation persist beyond the experimental session.

"'Considerably more research would need to be done before concluding that this method had clinical application.'"

No doubt Bishop is right to be cautious with these preliminary findings, but as someone who reads a lot of reports of early research results, I wouldn't trash this one. It has interesting possibilities including uses for dementia patients.

Meanwhile, I'm sure interested. If the brain stimulation were available now, I'd be first on line because...

What about you – would you be on line with me? You can read more details about the research by following the links above.

Yes. I would be there with you, Ronni!
Let 'em begin the assessments with me!

Yes, I'll be right behind you. My sister and I were saying what we really needed was RAM for our memories, maybe this is it, and something that would recharge us like our phones.

I'll be fifth in line.

I was about to comment and then forgot what I was going to say. But I'm sure it was brilliant.

Yes indeed, count me in! I used to be known for my vocabulary, and I just spent two minutes searching my mind for an adjective for “vocabulary.” I must move on now.

I wear corrective lenses to see. Hearing devices, dental appliances, or whatever are available if we need. Why not plug into electrodes if found safe and useful to help with memory function? I could definitely use the help!

I expect to see many more "windfalls" like this as the demography progresses. There's money
to be made off the elderly!! I notice the slippage as I age. In the sixties I had 98% on SAT
vocabulary. Now I forget words too. Working as a toll seller for ferries with up to 900
transactions an eight hour day helped, but now I am retired (71). My brain doesn't receive
the exercise it should. Ahhh, if only life was like the Benjamin Button movie, we'd all get
younger ending our existence with an orgasm.

Living as I do in a retirement community, we have decided we all need to walk around in groups of five...one of the five can always fill in the correct word for the speaker! The good thing is we know we're not alone; the best thing is that we laugh constantly about and during our conversations. We talk often about writing a skit...but when we get to the task, we can't remember the funniest chats we had that week!!!

We'd all be in line, reminding each other why.

To end the frustration of losing words would be worth all the -- oh darn, what is the word I'm looking for? Yep, I would join the line.

OMG I am already at the end of the line. Figures. I forget why....

I love words, so I guess, sure, this would be a good thing. So far, it's not happening too much, but who knows in the future?

I'd be on for it in a minute! So far, I'm at the early stage of temporarily losing things I have in my head, but as so many say .... the frustration!

I’m so glad you wrote about this. I heard the tail end of this report twice last week and was fascinated but didn't have enough info to track it down. As for getting in line, of course; sign me up.

It'll be interesting to see if the effects are longer-lasting than one session. If so, watch out for the vulture capitalists. They'll swoop in to monetize the procedure and equipment, which could price the whole thing out of reach for many, at least initially.

I'm now 77. When I was in my 20's my husband complained that ! didn't have any nouns.. I just called every noun "thingy" and didn't worry about it. Now I still don't worry about it. If I forget a word (often) I just stick in the closest word I can think of. I figure it's the listener's job to understand what !'m saying; they usually do. Much less stress on me! Not interested in electrodes. Just my own experience, of course.

Earlier today i heard an article on NPR announcing that this was the 103rd birthday of writer Beverly Cleary. I'm not sure whether the interview that was played was current or something recorded previously, but she was very cogent as she explained how she has always loved reading and writing stories. Cleary became a librarian and eventually ventured into writing books herself, which led to a very successful career as an author of children's books. She didn't mention one thing about electrodes or other artificial stimulation, but reading, writing, thinking and speaking seem to have served her very well. I suspect she may have had some very good genetic material too .

Count on me to join the group!

I'd love to get rid of some of the brain fog (not chemo induced in my case). Even though I still do my PR consulting work part time and write for a living, I forget words all the time. Never mind trying to remember why I walked downstairs or into the other room or if I put salt in the pot of water boiling for spaghetti. So sign me up. My only concern would be if there are unintended consequences long term. Anyone study that yet?

"If the brain stimulation were available now, I'd be first on line..."

I be right behind you.

Meanwhile, I am shamelessly dependent on the thesaurus.

OMG.....I am loving all the comments! I agree with them all! What is so great about us seniors is that even though our memory ain’t t what it use to be, our humor is outstanding!