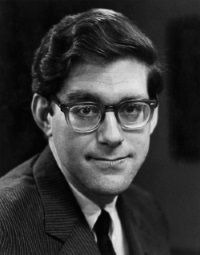 For as long as I can remember I have relied on The New York Times health reporter Robert Pear to give me the best, most accurate and thorough general reporting on health issues. As his paper noted in their obituary of Pear this week, his byline appeared on more than 6,700 Times articles.

”Elisabeth Bumiller, the current Washington bureau chief, recalled that 'the phrase “We have HEALTH by Pear' was uttered hundreds of times in front-page meetings, to the relief of a generation of executive editors,” referring to the shorthand tag with which his proposed articles were named or, in newspaper parlance, slugged.

“'In his memory we are retiring the slug HEALTH,' she said, 'because it can only be by Pear.'”

There must be thousands of people like me who have relied on Robert Pear for health news and, also like me, probably have no idea where to turn now for information as smart and informed as his.

For a couple of days last week, some seagulls spent a good deal of their time hanging on a traffic cam in London. A lot of people took photographs and the birds even seemed to pose for the camera. Here's one of the many videos:

DRUG MAKERS MUST NOW INCLUDE PRICE IN TV DRUG COMMERCIALS

If you watch cable television, you have undoubtedly seen the ubiquitous commercials for two arthritis drugs, Humira and Xeljanz. But as frequently as you've seen those adverts, they never told you the price.

Now, probably beginning in about July, advertisers will be required to include the drug's price if it is more than $35, and on these two drugs, you are in for big-time sticker shock. As The New York Times reports:

”Two dosing pens of AbbVie’s Humira, which treats rheumatoid arthritis and other conditions, have an average retail price of $5,684, according to the website GoodRx which tracks drug prices. Another frequently advertised drug, Xeljanz, a Pfizer arthritis medication, costs about $4,840 a month.”

Of course, the pharmaceutical companies can sue over the new regulation (doesn't everyone these days?) and it might never happen. But it should. And it should apply also to print and online advertising.

You can read more at STAT.

You can tell by the gigantic monitor that this is an old, old video. But it made me laugh out loud and maybe you will too.

WHEN KIDS WERE MAILED VIA THE U.S. POSTAL SERVICE

Yes, you read that right – mailing children – and it was legal in the early years of the 20th century. This is an audio report from the Washington Post:

The election is not certified yet, but it appears that the city of Denver has voted to decriminalize use of “magic mushrooms,” also known as psilocybin.

“The Denver Elections Division will continue accepting military and overseas ballots, but typically those numbers are small. Results will be certified May 16.”

”Last fall, the U.S. Food and Drug Administration granted psilocybin 'breakthrough therapy' designation for its potential to help with treatment-resistant depression, a status that speeds up the development and review process for a medicine containing the substance.

“As written, I-301 directs police via ordinance to treat enforcement of laws against possession of psilocybin mushrooms as their lowest priority. It also bars the use of city resources or money to impose criminal penalties.”

Groups in Oregon and California are working to include a similar vote on psilocybin on the 2020 ballot. Some other states are said to be considering a vote too.

(Full disclosure: As I've reported in these pages, last December I participated in a magic mushroom guided “trip” to deal with some issues about dying associated with my pancreatic cancer diagnosis. I am now a believer. You can read that report here and here.)

She's the cutest thing, Juno the rescue otter is.

For many years, Eddie the Otter was a favorite among visitors to the Oregon Zoo in Portland where he showed off his skill at slam-dunking his own basketball. It was a sad day when, at age 20, Eddie died last year.

The staff knew they needed to find another such otter and lo – Juno, a five-year-old southern sea otter turned up:

"She was rescued as a pup near Monterey Bay in California, after her mom went missing. She is a good otter, according to the person whose job it is to evaluate otters,” reports the Washington Post.

Catch up with Juno's story in this video:

The U.S. Army will be rolling out a new uniform next year:

”The United States Army wanted a spiffy new service uniform, one that would stand out in a tough recruiting environment and polish the Army’s image after a generation of grinding and divisive wars,” reports The New York Times.

“So it turned the clock back. Way back.

“It chose a new uniform that looks almost exactly like the old green gabardine wool field coat and khaki trousers that officers wore in World War II. Probably not by coincidence, that’s what the Army was wearing the last time the nation celebrated total victory in a major war.”

Maybe the uniform is “way back” to the reporter on the the story, but probably not to many of us who hang out at this blog. I instantly remembered my dad in an almost identical uniform during World War II.

Here he is in the early 1940s before being shipped overseas, along with the planned “new” uniforms. (Sorry I can't find a full-body shot of my father in uniform but trust me, they look the same.) 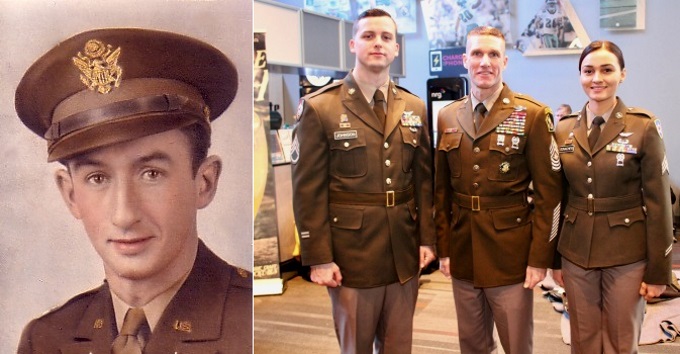 I think the new uniforms look spiffy and terrific. You can find out more at The New York Times.

Last Monday, the United Nations released a summary of its report about the mess we humans have made of planet Earth. It is terrifying.

Am I the only person who fails to find any man with facial hair unsexy? Mr Clooney was sexy when he and his razor were good buds! Of course, in my 80s, it's all academic - lol. If I were a man, I would probably tire of shaving pretty quickly; but, I do enjoy a clean-shaven face on a man.

I wonder if the new uniforms comport with the childhood fantasies of the military loved by our Infant-in-chief. I see now he wants to make the 4th of July fireworks about him too.

Nice uniforms though. One of my aunts who I never knew well designed the WWII ere uniforms for the WACs.

I found the best subzero winter pants at a vintage clothing store years ago. They were a pair of Army wool pants. The quality of the yarn and the weave was so high, my legs never felt the wind or the subzero temps.

I'll bet the new Army uniforms will be made overseas. The fabric will be thin, the buttons will fall off, the hem and seam allowances will be nonexistent, the fit will be sloppy, the sizing will be irregular, etc.

Meanwhile, the otter and Clooney are just too cute for words.

I had some of those winter wool army pants year's ago. Got them at the Army/Navy Surplus store in Seattle and went cross country skiing in them. They were great, too bad I "grew" out of them.

I will really miss Robert Pear's writing and reporting, a great loss.

Laughed so hard, thank you!

What a wonderful photo of your father, Ronni.

A dunkin' otter and George Clooney make for a great Saturday morning!

lol George Clooney.. do you wonder how many people will dial that phone number? lol

Memories -how well I remember that uniform. I was a star-struck teenager during WWII and was immediately attracted by any guy in a uniform. I was not alone.

Love Juno; Otters are the cutest critters and I never tire of watching them. I guess you could say my teenage fascination with uniforms (Of course I wasn't interested in the guy wearing one - well, not much.) carried over to other creatures.

I bought a Navy sweater at an Army surplus store and wore it for years. It was still in top condition when I finally parted with it.

Requiring price information on drug ads is a step in the right direction. But imho the govt. should outlaw advertising prescription drugs on TV or anywhere else ... or if not outlaw just say Medicare won't pay for advertised drugs, which is the same thing.

Juno, George Clooney, seagulls....I'm in love with them all!

I agree with Tom. I think advertising drugs to the public via TV and print media is one of the least intelligent things our society has ever done--well, that is, until Agent O. got elected (with the generous assistance of our "friends" in Russia, who are likely already hard at work on the 2020 election).