Home About Archive Contact
Growing Old Plus The Alex and Ronni Show
ELDER MUSIC: 1955 Yet Again

Three days ago or so, this email arrived in my inbox:

”I’m visiting Darlene in Tucson. You’re the one who brought us together!”

That would be Nana Royer writing the email and Darlene Costner whose names you will recognize from their many cogent comments. And here they are in the flesh – well, I guess it's electronic flesh. Great smiles. 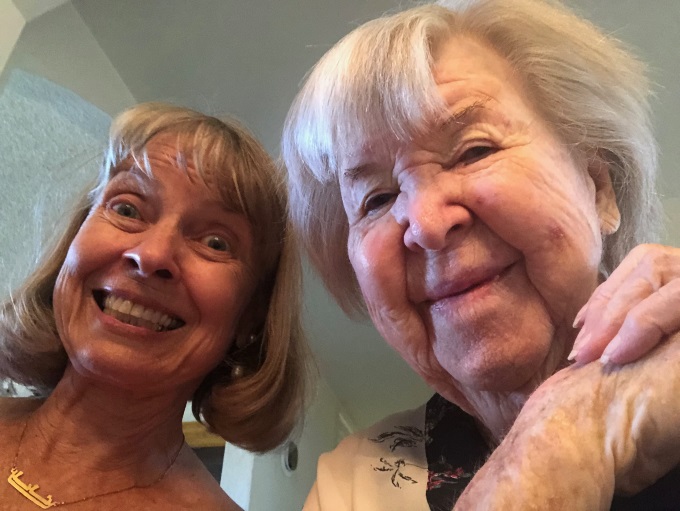 ANOTHER SET OF UNLIKELY ANIMAL FRIENDS

It's not just the cute and cuddly animals who find odd friendships. This time is it a lamb watching over two much larger baby rhinos.

A charming story about a man and his cat's adventures in the wild.

Adventurer and filmmaker, JJ Yosh, resides in Boulder, Colorado with his black cat Simon. He adopted the feline two or three years ago, and they have been traveling together across land and water ever since - with Simon normally nestled in his backpack.

SUCH A GOOD IDEA, THESE LIBRARIES

In a new project, the city of Chicago is adding libraries to some new public housing projects:

”...each project includes a new branch library ('co-location' is the term of art). The libraries are devised as outward-facing hubs for the surrounding neighborhoods, already attracting a mix of toddlers, retirees, after-school teens, job-seekers, not to mention the traditional readers, nappers and borrowers of DVDs.”

Here are snapshots of two of them: 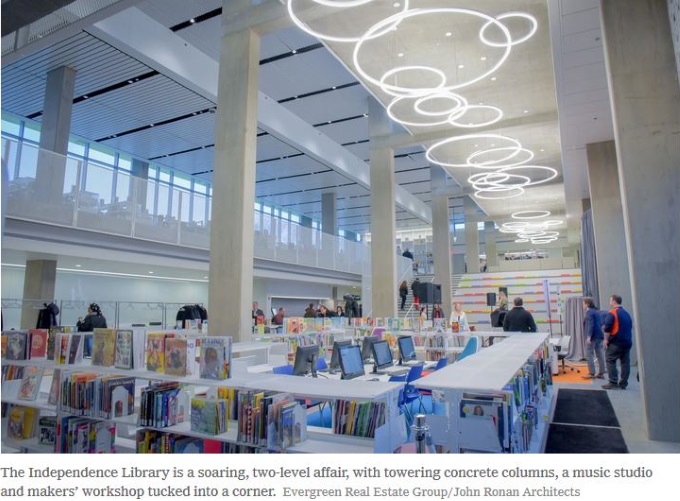 How many butterflies does it take to make a noise in the woods? A few million. Watch (and listen!) as these monarchs put on a show at their overwintering site in Mexico.

This was filmed while leading a trip to visit the monarch migration with Atlas Obscura. The butterfly sounds begin at about 3:25. You might need to punch up your audio.

Wendy Vitter was confirmed to a lifetime appointment as a federal judge on Thursday. Her views are so extreme that even Senator Susan Collins of Maine didn't vote for her – but every other Republican did.

According to Business Insider,

”Vitter once accused Planned Parenthood of 'killing over 150,000 females a year,' and at a 2013 conference referred to a brochure that touted false claims about abortion being linked to breast cancer, and birth control causing women to pursue violent relationships.”

Did I mention that her judgeship is a lifetime appointment?

A new Swiss treat has is making its way the United States. It is called ruby chocolate. Here is a short explanation video:

It's for sale at Amazon (and maybe other places; I didn't check) and you can read more about it at the Washington Post.

Brad had been at the Oahu SPCA shelter since he was a pup – so many years, they made a video for him:

At last, after seven years, a Michiganer family vacationing in Hawaii fell in love with him:

"'They instantly fell in love," shelter manager Ashley Weber tells [Mother Nature Network]. 'They expressed interest in adopting Brad and we have been in contact with them ever since working out the details and going through extensive interviewing to ensure they would be a great fit...

“Brad will also spend his weekends at a cabin in norther Michigan where he will go hiking in the forest and spend time chasing squirrels.

“Because it will be expensive getting Brad from Hawaii to Michigan, the shelter set up a fundraiser to help pay his expenses. Brad is expected to arrive in Michigan the evening of May 16 and his new family will be there to pick him up when he arrives.”

HOW DOES A SLOTH SAY THANK YOU?

Okay, maybe I'm over-anthropomorphising but why not. I especially like the sloth's slow blink.

MNN gave us some additional information:

Lifetime appointments to any public office in these days of our living such long lives is ill considered. We really need to change that. I've been bugging my senator on the issue. I would vote for a 12-15 year appointment which would put an appointee in office past the particular President/Administration from whom the nomination came. One additional appointment might be feasible, but I'm not suggesting it.

Hello Nana and Darlene! It looks like you're having a good visit together, and it's a treat for us.

Liked the rhino+pal and learning about their useful mud baths. The butterflies enchanted with their own 'waterfall,' and even a sloth has charm.

The public housing section is being emailed to my local politicos.

I hope those responsible regret having made any position a lifetime appointment. Nobody is that good for that long.

The sound of butterflies ... marvelous!