Only about 10 percent of people with this diagnosis are eligible for the surgery. It took 12 hours. The Mayo Clinic explains in brief what it is:

”A Whipple procedure — also known as a pancreaticoduodenectomy — is a complex operation to remove the head of the pancreas, the first part of the small intestine (duodenum), the gallbladder and the bile duct.”

There is more to it, but I've left out some of the information and I am asking you, if you know more, not fill in what's missing in that definition.

Almost always, I am a realist. In pretty much every case in my life, I have wanted to know what is real and true. But there are details I don't need until I need them. So keep any additional information you have to yourselves please.

I've published this photo before but for those of you who missed it, here is what I looked like the morning after the surgery, in intensive care. 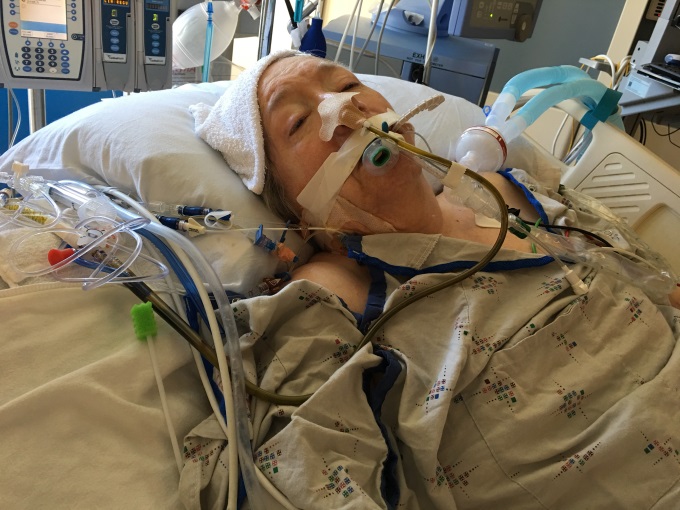 It is one of the great good things in life that, mostly, we are out cold during surgery and have no memory of what happened. Those shots in medical TV dramas of doctors and nurses mucking about inside patients' bleeding torsos are scary enough. I cover my eyes when they turn up.

[Related side-issue: I am impressed, however, with the props used in those surgery dramas. They're good enough to put me off from watching more.]

Following the surgery, I spent at least four months, give or take, recovering from it. It took a long, long time and I have realized that I'd not paid close enough attention when the surgeon explained what he would do and what the consequences would be for me.

I had no idea it would be as difficult as it was – it is the hardest thing I've ever done and not something you soon forget.

But. Undoubtedly, a big reason I am still here is due to that surgery along with the excellent care I have received since then.

We bake cakes for birthday celebrations, set off fireworks on the Fourth of July and New Years, give gifts to our spouses on wedding anniversaries and cook a big meal on Thanksgiving. But what about surgery anniversaries?

It's probable that most people want to forget them but I think I'll go buy myself some flowers today. The girl in that photo above could sure use some.

Kuddos to you! I've been thinking that each milestone on my path needs to be celebrated...which makes me ponder new ways to celebrate things. You've given me some ideas...not fireworks though.

I had major surgery done 10 years ago but for the life of me, I can't remember the exact date. I know it was in June of 2009. Needles to say, I am not celebrating even though the surgery saved my life.

I think I'd send flowers to the surgeon! They ought to be able to celebrate too.

And...as Janis Ian aptly voiced it so long ago..."Let's drink a toast to those who best survived the life they've led" .

And it certainly is you, dear lady. You just play the cards life deals you with courage and insight. That is the gift you give to those that know you, plus the fringe dwellers like me reading "Time Goes By" each morning here in Portland.

I am so impressed with your ability to not only survive but thrive through all of this! Happy surgery anniversary!

So glad you are still with us, Ronnie! So glad you are still you, with all your wisdom, intelligence, honesty, and charm. I hope you know that you have helped so many people live their best lives as elders, as we all deserve to. Getting by with a little help from our friends ... is how we get by, and sometimes even thrive.

I'll add my voice to this chorus of Ronni celebrants, and in a way that's done every day, right here.

Cheers, and more to you. You've kept on thriving and learning through this, and because of you, we've also been opportune to become more.

Flowers indeed! What a great milestone to celebrate. You are tough and brave.

I think there are many of us out here who would love to send you flowers if we knew where to send them. You continue to bless a lot of lives. 💐🍀(Just for luck.)

I agree. Flowers for Ronni. And maybe a latte.

May this day be a good one.

Screw the flowers. Bring on the Ice Cream! And, as you well know, I have a friend in the business. All my love, cutie.

Happy Anniversary, Ronni! Long may you wave (and write)! Raising a bowl of double dark chocolate gelato in your honor.

Wishing you bouquets and garlands and leis all your days. xo

John Brandt and others:

There is something in my chemotherapy mixture that makes my esophagus close up if I eat or drink cold foods - hence, no ice cream. I've been on hiatus from chemo for a few weeks so I've been indulging in ice cream a lot in anticipation of having to stop doing that in a few days.

Thank you all for such lovely good wishes you're sending. I'm having a wonderful time reading them.

Happy life-saving surgery anniversary. It is an important occasion to commemorate.

My husband had open-heart surgery last October 10, and I assure you, we will be having a celebration of that date this year.

A very, very Happy Anniversary, Ronni, with flowers and ice cream, and all good thoughts.

Two open heart surgeries in one year, and celebrated 3 months post for one of the ones yesterday, baby steps feeling better each day, and prayers for those surgeons who perform them, and the nurses too. And thank you Ronni for everything you do with your blog to keep us together on this journey. m

Surgery is a challenge (I, too, have had several) but one comment you made is especially
true, the surgeon never REALLY explains how much agony the procedure will produce.
All too often the phrase is uttered: "You will experience some discomfort". My wife defines discomfort as pain due to the gruesome procedure you just endured. Dentists included.
Yeah, Ronni, you deserve some flowers. Nobody really can understand what you personally went through, although we can certainly commiserate. B

Good on you, kiddo!

Happy Anniversary! You are so brave, and your words of wisdom serve all your readers/friends who are lucky enough to follow your blog.

This surely calls for a celebration, pamper yourself girl.

Congratulations. Surviving and with a sense of humor can't be beat. I had gall stones in my 30's, and bounced back to build a rock garden...just what you are not supposed to do.

Now that's truly a joyous anniversary worth celebrating. Sorry you had to go through all you've been through though...

"Some flowers"? You deserve the entire flower shop! You're an amazing woman Ronni Bennett.

A very Happy Anniversary Ronni. So glad you are in our lives. I'm was a chicken and just as glad to not know what the recovery might be like but the cat's out of the bag so to speak. The second time my Dad had surgery for colon cancer it wasn't the disease that worried him but the recovery. You deserve a field of flowers. Love you.

The first thing that came to mind when I read your post was courage. You truly have an abundance of it. I'm not nearly sure I'd be as brave. In fact I know I wouldn't be.
One of the perks of reading your blog (for me at least) is that it constantly reminds me to appreciate each and every single dang day.
I know that is a well worn and even tiresome cliche. Still when the mundane daily annoyances occur of the paper not being delivered, a longer than usual line at the grocery, a recipe mucked up, an irritating neighbor....... it a glance at your blog every now and then puts it all in a perspective that I need to always keep in mind.
Thank you.
Tera

I hope you've been enjoying so me beautiful flowers on the first official day of summer. We deny ourselves these little pleasures too often, and at times of celebration like your second-second, there should be no holding back!

Wishing you many happy returns of this day!

So, in a less important way -- I, too, have exceeded expectations. Sure hope you keep exceeding 'em -- there's no law that says we can't break tradition or whatever!!

Can you have chocolate?

Ronni celebrate!! You are still here when some of the experts gave you a time frame. Life is random and the universe does with us as it pleases. My dad was not a candidate for Whipple. They said 6 months in August and in February he was gone. My little friend at my clinic 81 year old Jose just had a Whipple and after 2 shaky months is feeling good....not great, but good. His caretaker/wife of 67 years now has metastatic cancer!! Melinda Who will go first is anyone’s guess. My good friend who took her husband to every one of his chemos and later to all his immunotherapy appointments had a stomach ache last week. She was taken to the emergency room where they detected a large tumor in her stomach. She died 4 days after surgery and her husband with lung cancer is still here. I say it again....it is all random and when they turn the page on The Big Book and your name is on it, that will be goodbye.

Congratulations Ronni! I hope the flowers are gorgeous and fragrant.

I still remember that day of your surgery so clearly, as probably everybody else here does as well. How we all pretended we were in the room with you, peering over the surgeon's shoulder and cheering you on. And then all of us waiting with that mixture of hope and anxiety to hear something, anything about how you were doing.

It was as though you were family. Oh wait. You are.

I raise a glass of wine to your second birthday tonight! Hang in there.

This is supposed to be a bouquet of flowers but it doesn't save my spacing :0

Ronni your post was so moving to me today...it brought back all my memories of my pancreatic cancer diagnosis, whipple surgery and recovery. I am now at my third year anniversary of my surgery and the cancer has not returned....yet. The cancer is like my shadow..I have gone through many phases physically and emotionally and I think that such phases will continue. I reflected on those memories and have given recognition to its reality, and to myself and all the doctors , nurses and family and friends that have carried me in my recovery and in my continuation to take the leap of faith to live as fully as I can each day.
I recognize you and the many others of their triumphs and struggles with this disease. You have been such a guiding light....you are reaching so many...thank you. My prayers to you.......you deserve so many flowers and many bowls of ice cream...

Congratulations, Ronnie! I am among the large group who are grateful you are still here.....still inspiring and motivating us. I had a hole (accidentally) poked in my heart during a routine procedure. I was very close to dying, before a heart surgeon was able to find the hole and fix it. That was 2 years ago on March 28th. I didn't do anything special to mark the date--but I will from now on. Wish I could send you so many flowers it would take 3 strong men to deliver them. You deserve that, and more!

Deep red roses to you Ronnie. I appreciate you being alive- every minute.
Ellen