Medicare does a decent job of making their statements of what Medicare paid, what the a patient's supplemental coverage paid and what the patient him/herself may be billed. But that's mostly for people who are 65 and older.

I know that a lot of TGB readers haven't yet reached Medicare age and that non-Medicare medical bills can be nearly impossible to decipher. Now there is some help.

It's called Your Go-To Guide to Decode Medical Bills, a project of NPR and Kaiser Health News to create the “Bill of the Month”. It is

”...a crowdsourced investigative series in which we dissect and explain medical bills you send us. We have received nearly 2,000 submissions of outrageous and confusing medical bills from across the country.

“Each month we select one bill to thoroughly investigate, often resulting in the bill being resolved soon after the story is published.”

The fact that KHN/NPR can't possibly explain all the bills they receive led to this helpful series – a user-friendly toolkit, as they put it – to help patients understand “some of the ins and outs of medical billing.”

The first section of the most recent “Bill of the Month” contains checklists for what to do before seeking medical care; how to use an itemized bill; common mistakes that might be on your bill; and more. 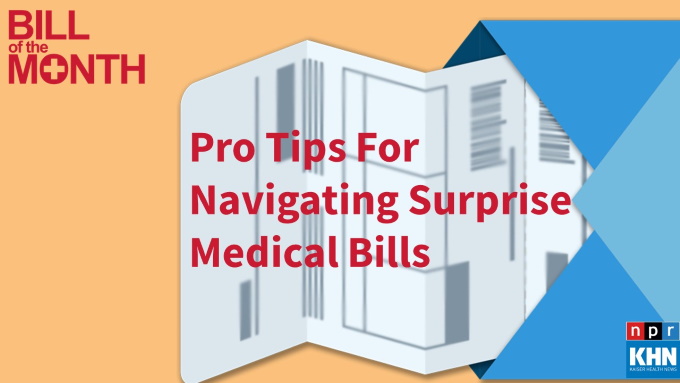 There is also a glossary section with definitions of old familiars like copay. Some of them I'd never heard of such as Chargemaster, and apparently there is a difference between outpatient services and outpatient clinic. All explained in non-medical terms so people like me can understand.

You can find this latest in the free series at Kaiser Health News.

”...that would cut prices on virtually all branded prescription drugs sold to Medicare and other government programs, according to two industry sources who had discussions with the White House.

“Americans pay the highest prices for prescription drugs in the world as most other developed nations have single-payer systems in which the government negotiates drug prices for its people.”

Since we have learned that the president changes his mind from hour to hour and even, sometimes denies having said things we all saw him say on the video tape, there is no way to tell how real this is. You can read more at Reuters.

Re: Rx cost changes
Not in my sights is this anything more than a planted rumor.

I'd guess this is a political ploy, amidst recent reports that the pres and his republican lawmakers are going after Social Security, which will be after the election of course. Gearing up for what sticks on the wall for 2020 election.

Thank heavens for Medicare. And I wonder, what about the millions being spent by old people like my ex mother-in-law, who went to all the docs in town the way a bee visits every flower in the garden? Because it wasn't going to come out of her pocket. I, nor my friends do this, we want to avoid a trip to the doc if we can, even sometimes pushing it too far. But I suspect there are many like my ex MIL. The thought of losing Medicare or S.S. makes me verrry nervous.

Again I will reiterate that I have heard NONE of the candidates, right or left, offering “plans” or “big ideas” that could benefit elders specifically. A revision to the social security COLA calculation would be a big idea!!!

All I hear is crickets...

The deadly silence by both political parties when it comes to many issues effecting seniors is deafening. I guess they think they have our vote locked-in (that we will vote as we have voted for all of our lives) no matter what happens. We have to let them know that the status cannot remain Quo.

I have enjoyed your blog for several months. Unfortunately I am unsubscribing due to the political partisan info that has started creeping into the blog. I don’t need it, don’t want to read it and expect it will get worse in the next months. I wish you well in your fight with pancreatic cancer. My sister survived five years before losing her battle at age 56.

I so appreciate all your information on Medicare and drug prices that effect us all. You do a wonderful job and I’m so thankful for all you do and the research you do.

I have enjoyed and followed your blog from the beginning and have saved many posts. It is invaluable information and to be part of a blog with so many intelligent thoughtful people of reason is great.

Thank you for sharing this important information, Ronni.